During a protest at Chiang Mai University yesterday (23 January) to demand the right to bail for political prisoners, police attempted to detain two students and accused them of causing panic and misunderstanding by dressing like inmates. 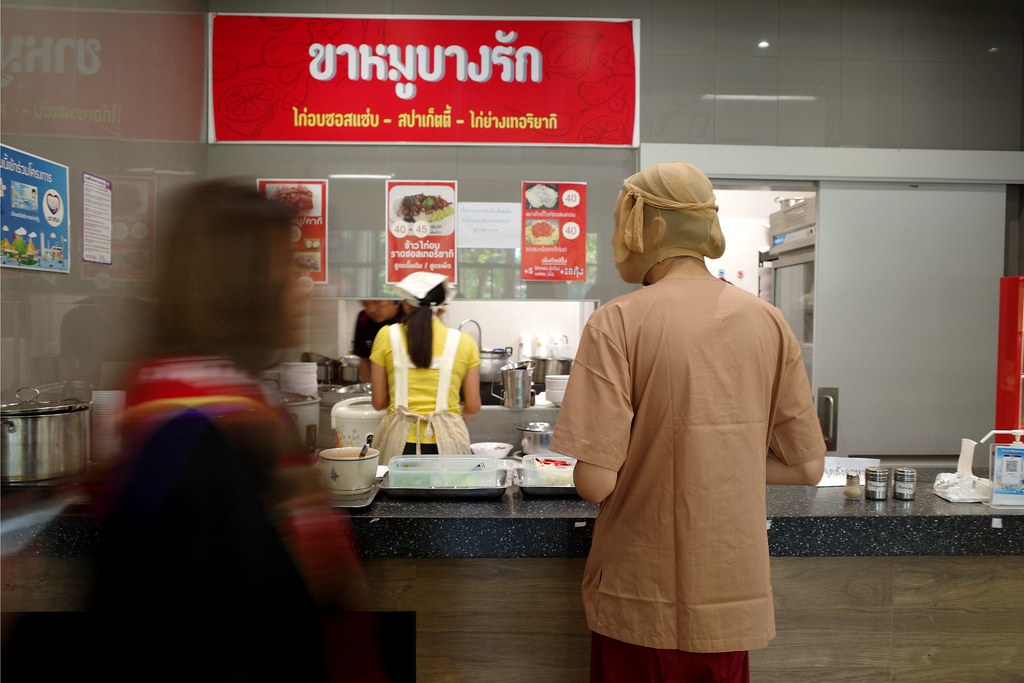 From 13.00 – 18.12, while graduation ceremony rehearsals were taking place, 7 students participated in a campus-wide performance as part of the protest to demand the release of political prisoners and to back the demands made by activists Tantawan Tuatulanon and Orawan Phuphong when they revoked their own bail on 16 January.

The students were seen walking around campus dressed in an inmate’s uniform with stockings over their heads and chains on their wrists and ankles. At 17.00, they met by Ang Kaew, an on-campus reservoir, where other protesters were standing as part of the protest calling for the right to bail for detained activists and protesters. Water from the reservoir was poured on them, making it look as if they were bleeding as pigment dissolved onto their clothes. A representative of the students also read out Tantawan and Orawan’s demands. 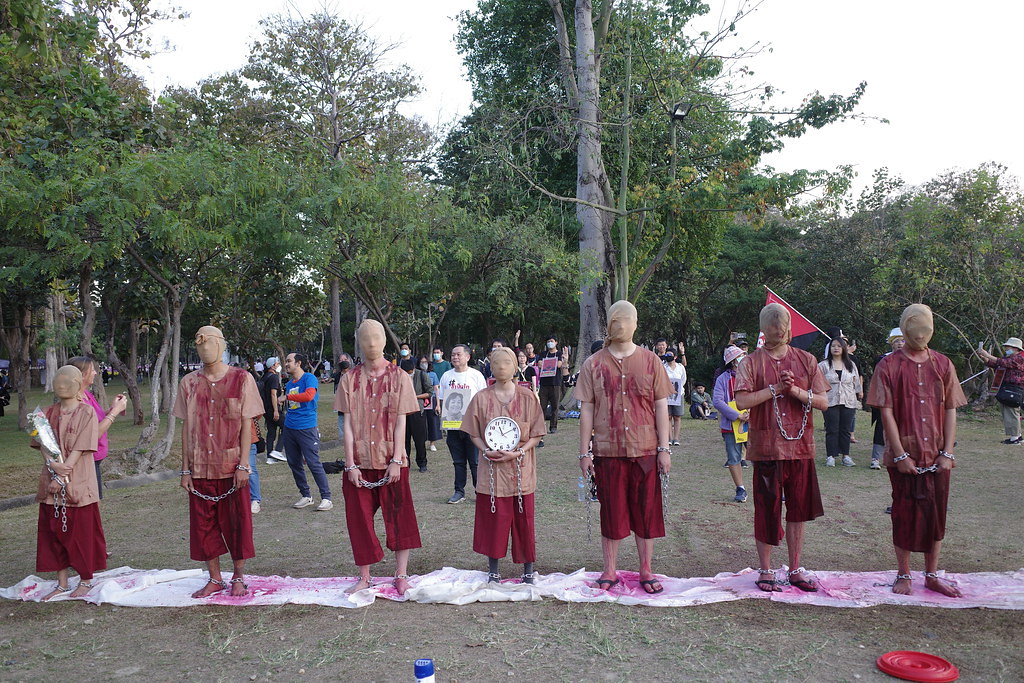 The 7 students, covered in red paint after water was poured on them, standing with others participating in the protest calling for the right to bail.

Tantawan and Orawan called for the reform of the judicial system so that human rights and freedom of expression take priority, and so that courts are independent and protect people’s freedom, as well as for judges to make decisions without intervention from their own executives.

They also called for all charges to be dropped against those exercising their freedoms of expression and assembly, and for every political party to guarantee people’s rights, freedoms, and political participation by backing the repeal of the royal defamation law and sedition law.

After no response was made to their demands within the three-day time limit, Tantawan and Orawan announced on 18 January that they would be going on a dry hunger strike and would not request bail for themselves until their demands are met. They were taken to the Department of Corrections Hospital last Friday (20 January) and are now in their 7th day of their hunger strike. 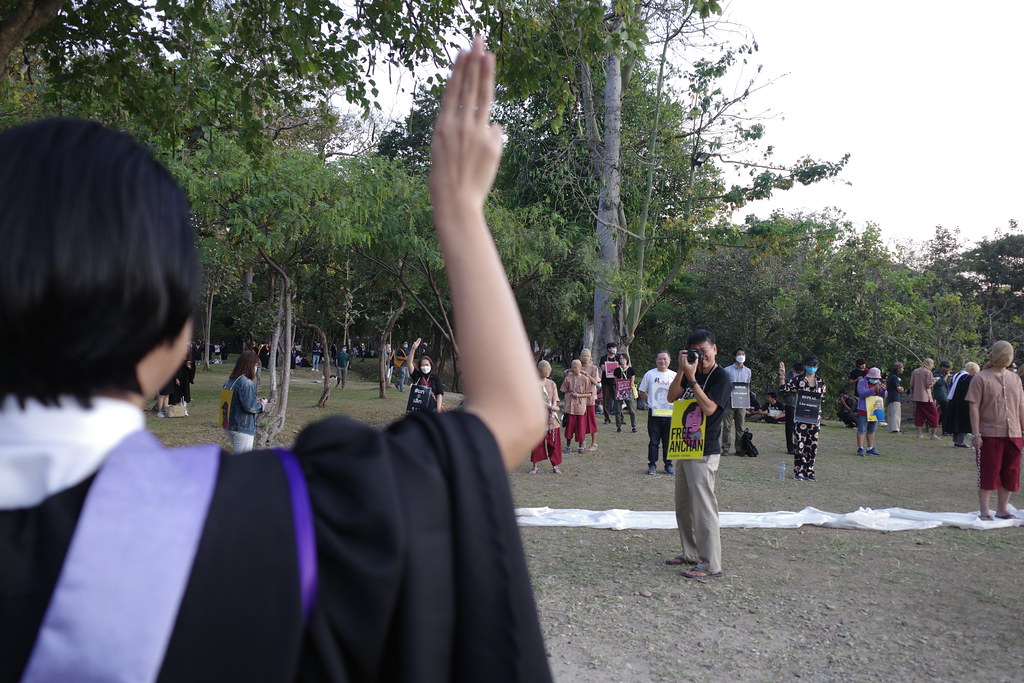 A graduate flashing the three-finger salute at protesters gathering next to Ang Kaew.

At around 20.00, it was reported that Tantawan and Orawan have arrived at Thammasat University Hospital.

Police attempt to detain students for dressing like inmates 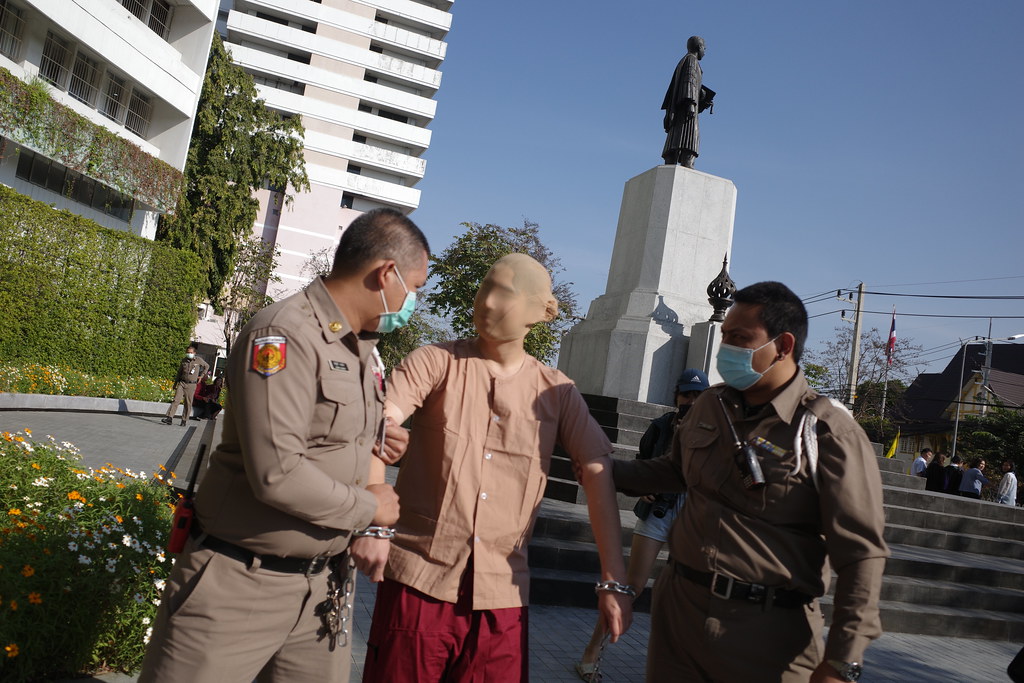 Police officers surrounding one of the two students seen standing around Maharaj Nakorn Chiang Mai Hospital dressed like an inmate.

While the students were taking part in yesterdays’ performance at Chiang Mai University, police officers attempted to detain two medical students while they were standing around Maharaj Nakorn Chiang Mai Hospital, a teaching hospital in Chiang Mai city affiliated with Chiang Mai University’s Faculty of Medicine. The officers accused the students of causing public panic and making the officers mistake them for inmates from a nearby prison brought to the hospital for treatment. They were taken to a police office in the hospital reprimanded, before a lawyer from Thai Lawyers for Human Rights (TLHR)’s Chiang Mai office arrive to negotiate their release. However, corrections officers refused to release the students until they apologize for dressing like an inmate.

Following the incident, the Chiang Mai Central Prison issued a statement addressed to the Department of Corrections saying that they were informed by correction officers guarding sick inmates receiving treatment at the hospital of a group of people dressed like officers and chained inmates, which may damage the Department’s reputation. The Prison said that it has looked into the incident, and that the group in question is not affiliated with the Chiang Mai Central Prison.

2. Or, Transfer money via Paypal, to e-mail address: [email protected]ai.com, please leave a comment on the transaction as “For Prachatai English”