Right groups launch appeal for the release of political prisoners

Following the detention of monarchy reform activists Sopon Surariddhidhamrong and Nutthanit Duangmusit, the Observatory for the Protection of Human Rights Defenders, a partnership of the International Federation for Human Rights (FIDH) and the World Organisation Against Torture (OMCT), launched an urgent appeal asking the international community to call on the Thai authorities to immediately release detained human right defenders and end all acts of harassment against them. 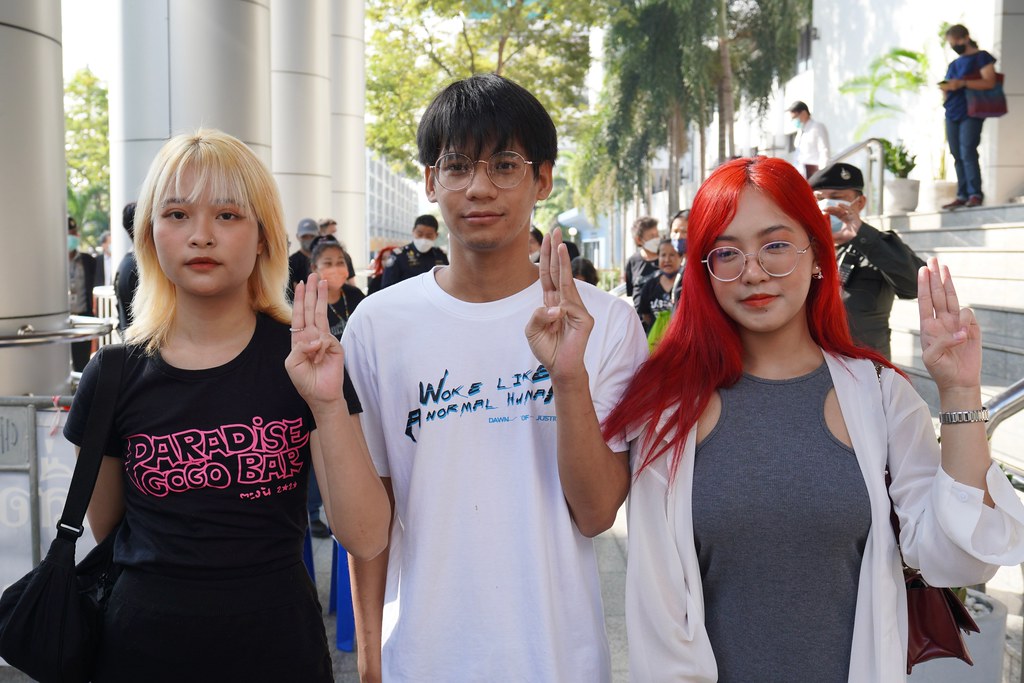 The Observatory has been informed about the arbitrary detention and ongoing judicial harassment of Mr Sopon Surariddhidhamrong, aka Get, leader of the student pro-democracy group Mok Luang Rim Nam, and Ms Natthanit Duangmusit, aka Baipor, member of the pro-democracy and monarchy reform activist group Thalu Wang. Founded in August 2020, Mok Luang Rim Nam has expanded from advocating for the rights of students at Navamindradhiraj University in Bangkok to various human rights issues in Thailand, including enforced disappearance, labour rights, and equality. Formed in early 2022, Thalu Wang has been advocating for the abolition of Article 112 of Thailand Criminal Code (“lèse-majesté”) and conducting public opinion polls at various locations in Bangkok on how the Thai monarchy affects people’s lives and whether the institution should be reformed.

On January 9, 2023, the Bangkok Criminal Court revoked Sopon and Natthanit’s bail and ordered their detention, on the ground that the two violated the bail conditions of their temporary release, granted on May 31, 2022, and August 4, 2022, respectively, by participating in an anti-government protest on November 17, 2022, during the Asia-Pacific Economic Cooperation (APEC) Summit in Bangkok. Sopon’s bail conditions stemmed from a “lèse-majesté” case in which he is being prosecuted for allegedly giving a speech critical of Thailand’s Queen on April 22, 2022. As for Natthanit, her bail conditions also stemmed from a “lèse-majesté” case in connection with a Facebook post she shared on March 30, 2022, concerning the budget allocated to the monarchy as well as to public opinion polls she conducted in Bangkok. These surveys questioned the appropriateness of the government allegedly allowing Thailand’s King to exercise his powers at his discretion.

On the same day of their bail revocation, Sopon and Natthanit’s lawyer submitted a bail request, which was rejected by the Court, arguing that both had already broken their previous bail conditions by participating in the November 17, 2022 protest and were likely to cause other danger or commit again acts similar to the ones of which they were accused. Upon the Court’s decision, Sopon was taken to the Bangkok Remand Prison, and Natthanit was taken to the Women’s Correctional Institution in Bangkok to be held in pre-trial detention.

The Observatory recalls that Sopon and Natthanit face charges for alleged violations of Article 112 in connection with their pro-democracy and human rights activities. Sopon is currently facing “lèse-majesté” charges stemming from three separate cases: 1) a speech he made in Bangkok on April 6, 2022, which was deemed critical of the King; 2) the above-referenced speech he made at a protest in Bangkok on April 22, 2022; and 3) a speech he made on the occasion of International Workers’ Day on May 1, 2022, in Bangkok, which was deemed critical of the King. Sopon was detained for 30 days from May 2 to May 31, 2022, at the Bangkok Remand Prison, before being released on bail.

Natthanit, in turn, is currently facing charges under Article 112 in connection with three cases: 1) conducting a public opinion poll about royal motorcades at Siam Paragon in central Bangkok on February 8, 2022; 2) the above-referenced case related to the sharing of a post on Facebook about the budget allocated to the Thai monarchy on March 30, 2022; and 3) conducting public opinion polls on April 18, 2022, at different locations in Bangkok questioning the appropriateness of the government allegedly allowing the King to exercise his powers at his discretion. Natthanit was detained in connection with the February 8 event for 94 days between May 3 and August 4, 2022, at the Central Women’s Correctional Institution in Bangkok, before being released on bail.

While in detention, Sopon and Natthanit went on a hunger strike to protest their pre-trial detention and to demand their right to bail. They were granted temporary release on the conditions that they would refrain from repeating their offences, participating in demonstrations that cause public disorder, and engaging in activities that may damage the monarchy.

The Observatory expresses its deepest concern about the arbitrary detention and judicial harassment of Sopon and Natthanit, who seem to be only targeted for the legitimate exercise of their rights to freedom of expression and freedom of peaceful assembly. Furthermore, Tantawan Tuatulanon - a human rights defender who is currently being prosecuted for delivering a speech allegedly critical of the King via Facebook live on March 5, 2022 - is scheduled to attend a bail revocation hearing on March 1, 2023, where the Court will consider whether her participation in the November 17, 2022, APEC protest violated any of her bail conditions.

The Observatory notes that between November 24, 2020, and January 11, 2023, 226 people, including many human rights defenders and 17 minors, were charged under Article 112 of the Criminal Code. Five of them are currently held in detention pending trial.

The Observatory calls on the Thai authorities to immediately and unconditionally release Sopon Surariddhidhamrong, Natthanit Duangmusit, and all other human rights defenders in the country, and to put an end to all acts of harassment, including at the judicial level, against them.

Please write to the authorities of Thailand asking them to:

i. Guarantee in all circumstances the physical integrity and psychological well-being of Sopon Surariddhidhamrong, Natthanit Duangmusit, and all other human rights defenders and pro-democracy activists in Thailand;

ii. Immediately and unconditionally release Sopon Surariddhidhamrong, Natthanit Duangmusit, and all other human rights defenders and pro-democracy activists, since their detention is arbitrary as it seems to be merely aimed at punishing them for their legitimate human rights activities;

iii. Put an end to all acts of harassment, including at the judicial level, against Sopon Surariddhidhamrong, Natthanit Duangmusit, and all other human rights defenders and pro-democracy activists in the country, and ensure in all circumstances that they are able to carry out their legitimate activities without any hindrance and fear of reprisals;

iv. Guarantee in all circumstances the rights to freedom of expression and of peaceful assembly, as enshrined in international human right law, and particularly in Articles 19 and 21 of the International Covenant on Civil and Political Rights;

Please also write to the diplomatic representatives of Thailand in your respective countries.