Police operations to disperse protesters demonstrating against the APEC summit in Bangkok last month were launched without a court approval, a police official said during a recent parliamentary hearing. 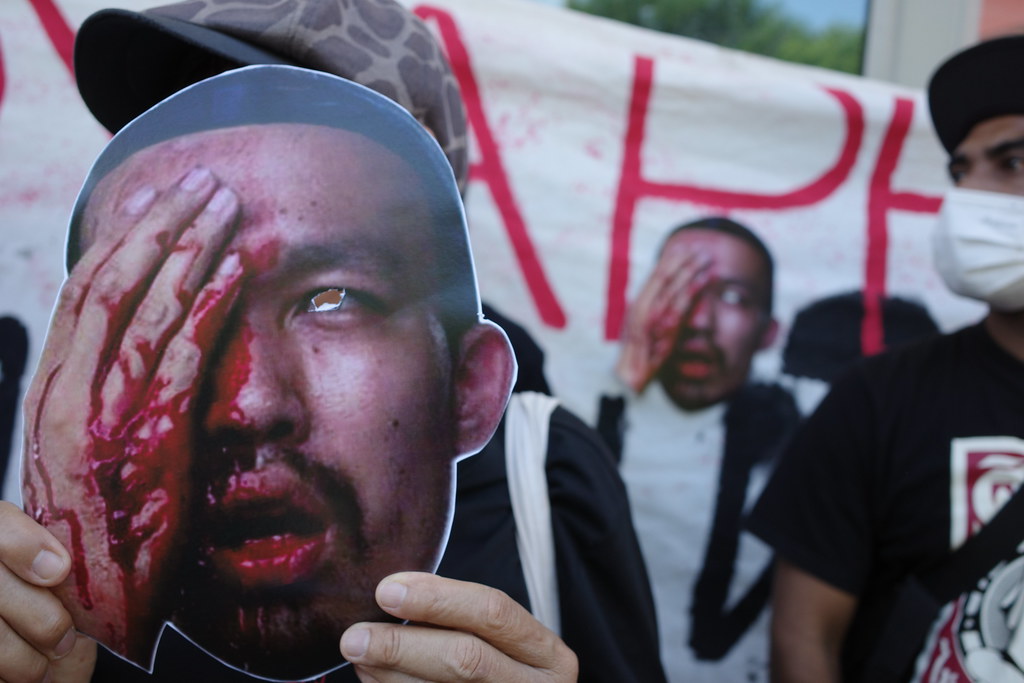 In this file photo from 29 November 2022, protesters in front of the U.S. Consulate in Chiang Mai hold up images of anti-government activist Payu Boonsophon who was shot in his right eye by a police baton round during the 18 November protest.

The revelation is expected to spell further legal trouble for the national police force, which is already being sued by a group of activists injured in the crackdown. One of the lawyers behind the lawsuit said that the  existing law on public assemblies clearly requires the police to obtain a formal backing from the Civil Court before dispersing political gatherings.

“This shows that police actions on that day were not in accordance with the Public Assembly Act,” Amarin Saichan from the Human Rights Lawyers Alliance said in a phone interview. “It is a case of a wrongdoing by people who are supposed to enforce the law.”

Several hundred protesters gathered at City Hall on 18 November and attempted to march to the venue where the government was hosting the Asia-Pacific Economic Cooperation, or APEC, forum. The march leaders wanted to submit a complaint over the bioeconomy policies pledged by APEC leaders, which they believe threaten community rights and natural resources.

But police blocked the group close to Democracy Monument. After skirmishes broke out, police moved in to disperse the protest and arrested 25 people, including a citizen journalist for the Isaan Record news agency. Dozens were also injured, including protesters, police, and a news photographer struck in her face by a bottle hurled from the group of riot police.

In response to the outburst of violence, the Human Rights Lawyers Alliance filed a new legal challenge on behalf of the activists.

Amarin, a lawyer from the group, noted that the 18 November gathering was the first major protest to take place after the government repealed the Emergency Decree in October. The emergency law, enacted by PM Prayut Chan-o-cha at the outbreak of COVID-19 in early 2020, permitted law enforcement officials to ban gatherings deemed to threaten public order. Critics say it was invoked mainly to suppress dissent against the government, rather than tackling the pandemic.

Since the ban is no longer in place, Amarin said that the police were required to follow the steps mandated by the Public Assembly Act.

Section 21 of the law stipulates that when police deem a certain gathering to be unlawful, they must first obtain a clearance from the Civil Court before moving or dispersing it. If the court rules in favour of the police, the authorities must notify the protesters and order them to leave the area.

If protesters fail to comply, the police are required to secure permission from the Civil Court to declare the protest area a “controlled zone” which can be cleared by force, if necessary.

The number of steps involved is meant to prevent law enforcement officials from banning or dispersing protests at their own discretion, protecting constitutional rights to peaceful assembly, the lawyer said.

“The law was designed in a way to make sure that any request [from the police] is scrutinised and deliberated first, for the sake of checks and balances,” Amarin said. He cited an example in Krabi where the Civil Court recently ruled against a request by local police to put an end to an environmental protest.

By the police’s own admission, there was no court backing for their decision to move in and crack down on the APEC protest.

This key information surfaced during a hearing held on 30 November by the House Committee on Law Enforcement, where activist leaders, their lawyers and representatives from the police force were summoned to testify about the sequence of events that led to the violent confrontation. The hearing was observed by several media personnel, including a correspondent for Prachatai English.

One of the three policemen, Pol Col Pitak Sitthikul, told the panel of parliamentarians that actions by the police on that day were in accordance with all relevant laws on public assembly, since an officer was dispatched to the Civil Court and applied for a permission to clear the protesters from the street.

But when opposition MP Rangsiman Rome pressed him to clarify how the court ruled on their dispersal request, another police official said the judges did not hand down a ruling, since the courthouse was closed on that day.

“It was on a special holiday mandated by the government for the APEC summit,” said Pol Col Thanayut Bhumngam, whose explanation was met with chuckles of derision and disbelief from some of the activists present at the hearing. The judges declined to open an emergency session to hear the police request because it did not qualify as “an urgent matter,” Thanayut added.

“We went to secure permission from the court on the following day, but the protest was already over by then,” Thanayut concluded his testimony. 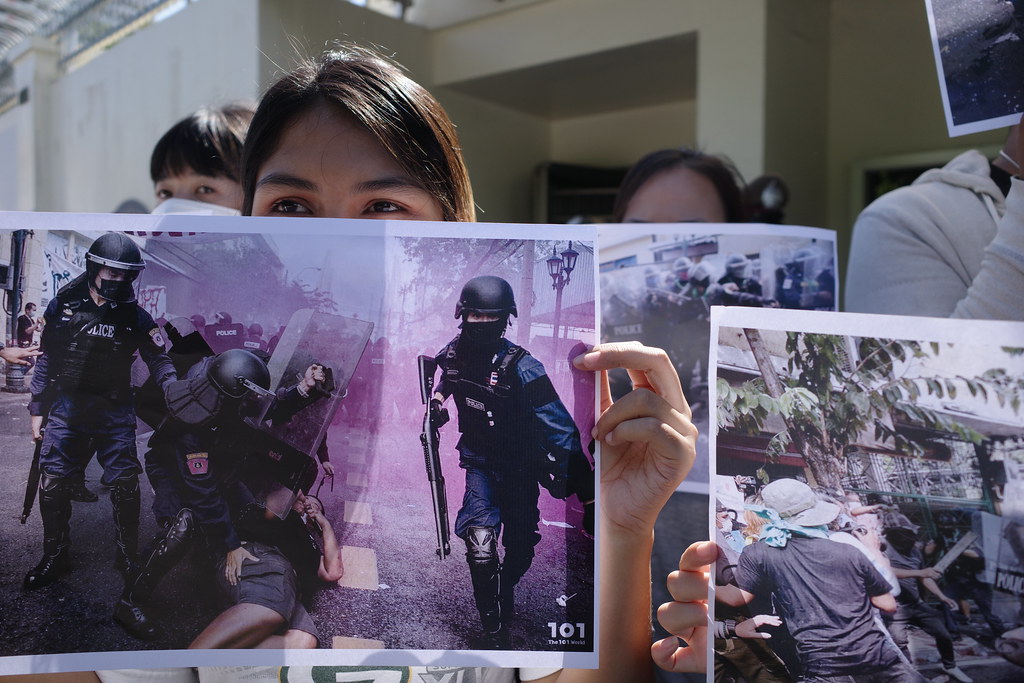 In this file photo from 29 November 2022, protesters in front of the U.S. Consulate in Chiang Mai hold up images that depict the police crackdown on the 18 November protest.

Both Thanayut and Pitak maintained that the crowd control units were forced to act and make arrests without waiting for a court hearing because the protesters were posing a clear and present threat to public safety.  In support of this assertion, they noted that an attempt was made to set a fire to a police vehicle.

One of the activists at the hearing, Baramee Chaiyarat, disputed that allegation. He said the demonstrators were merely burning chili on a charcoal grill – a Thai ritual of calling down a curse – which they placed on a police pickup truck. Baramee’s account is confirmed by multiple videos of the confrontation.

Thanayut went on to insist that the police were not launching a “crackdown” on the protest on 18 November, but merely detaining individuals engaged in violence or unlawful behaviour.

“Let me be clear, we did not disperse the protest. We were only making arrests,” Col. Thanayut said. “The gathering continued for a number of hours afterwards.”

He also offered a word of sympathy to the demonstrators wounded in the violence, including activist Payu Boonsophon who reportedly lost the eyesight in his right eye to an impact from a police baton round.

“I am very saddened to see members of the public being injured in this incident,” the officer said.

Amarin, the attorney assisting the protesters with their lawsuit, dismissed police explanations as a failed attempt at mental gymnastics.

“It’s just groundless assertions,” Amarin said, adding that the police did not produced any evidence to back their claim that they tried to secure permission from the Civil Court on 18 November, before moving in on the protesters.

He said the refusal of the police to wait for the court to convene a hearing as mandated by the law robbed the demonstrators of a chance to defend themselves.

“It runs against the principle of freedom of assembly,” Amarin said. “If there had been a hearing by the Civil Court first, there would have been an examination of whether the protesters were simply exercising their rights to peaceful assembly.”

At the parliamentary hearing on 30 November, Col Thanayut said that the police have set up their own investigation into the APEC protest. However, he did not elaborate on how the inquiry would take place or when its results would be made public.

The Human Rights Lawyers Alliance had also asked the court to rule whether the police action breached an injunction issued by the Civil Court back in August 2021, which stipulated that police crowd control measures be proportional to the actual threat posed by a given protest.

A hearing is set for 17 January 2023. Senior police commanders are expected to be summoned by the court to testify and explain their actions, Amarin said.