A 13-year-old protester says he has been harassed by the police after he tried to protest at Sanam Luang on the late King Bhumibol’s birthday. 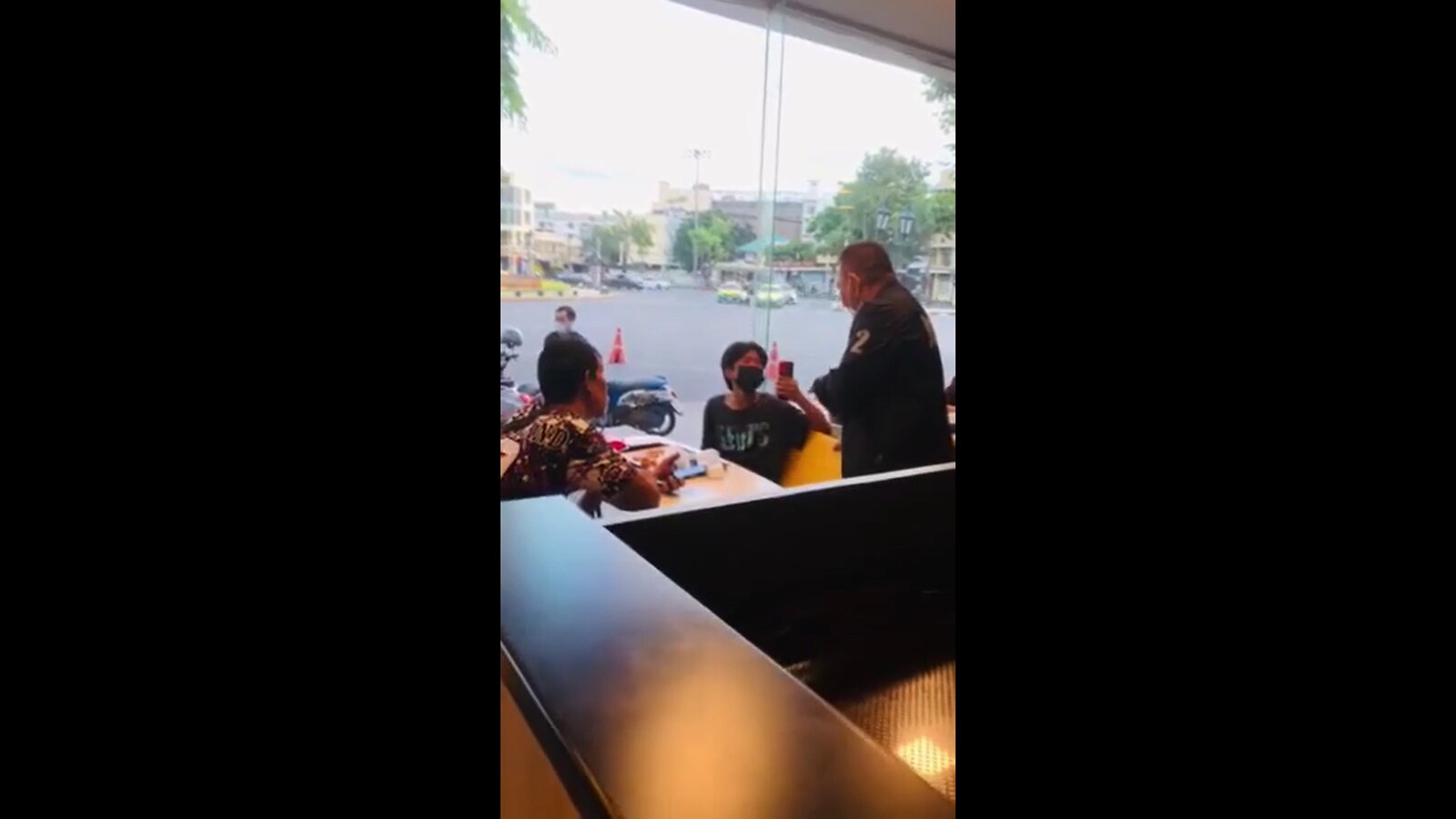 A screenshot of a video clip of a police officer speaking to Oia while he was sitting in the McDonald's next to the Democracy Monument.

“Oia” (pseudonym), a 13-year-old protester, said that on Monday (5 December) he tried to stage a protest calling for the repeal of the royal defamation law at Sanam Luang, where an event commemorating the birthday of the late King Bhumibol was taking place, saying that he disagrees with the royal defamation law because it has been used to harm people.

However, he was stopped by plainclothes police officers while near Thammasat University’s Tha Prachan campus, which is across the street from Sanam Luang. The officers confiscated Oia’s sign saying “Repeal Section 112” and forced him to move to the McDonald’s near the Democracy Monument.

While at the McDonald’s, Oia said that another officer came to talk to him and confiscated more signs, so he went home to get more paper with the same message before returning to the McDonald’s in the evening. While walking back to Sanam Luang, he was blocked by plainclothes police near the Rattanakosin Hotel, who tried to convince him to go back to the McDonald’s, claiming that a royal motorcade was going to pass through the area, even offering to give him a lift in their motorcycle.

Oia said he told the officers that he was just walking around and did not intend to disrupt the royal motorcade, but the officers did not believe him and told him that either he leaves on their motorcycle, or they will take him in a van. After a few more minutes of negotiation, Oia agreed to go back to the McDonald’s.

Later, Oia said he was walking towards the 14 October 1973 Memorial, near Khok Wua intersection, before heading towards Chana Songkhram Police Station. He then noticed plainclothes officers following him on their motorcycle and taking pictures of him. The officers then reprimanded him and told him not to go to Sanam Luang. Oia then went back to the McDonald’s since he felt unsafe. He also said that he did not want to travel with the police because he was concerned for his own safety.

After arriving at the McDonald’s, Oia said he was approached by a police officer, later reported to be Pol Capt Chumphon Suthiprapha, an inspector from Metropolitan Police Division 2, who tried to pull a piece of paper Oia was carrying under his arm. When Oia tried to walk away and into the McDonald’s, the officer threatened him, telling him that he will have Oia removed from the restaurant unless the 13-year-old showed him what was on the piece of paper.

An argument then took place, during which Oia told the officer that the police have no right to make him leave the restaurant. The officer then asked for Oia’s name and ID card. Oia said that he told the officer his name, but did not give him his ID. Around 10 plainclothes police then came to the McDonald’s along with personnel from the Ministry of Social Development and Human Security (MSDHS). Oia said it seemed like he was going to be arrested, and so he told the police that this is inappropriate because he had not done anything.

Oia said that, around 10 minutes later, he received a call from his family telling him to stop what he was doing because a police officer was going to visit them, which Oia said might be an attempt to threaten him to stop his activity, but he said that he wasn’t doing anything at the time and did not do anything wrong.

Oia said he was concerned that the police would either charge him or harm him, and that he found it to be inappropriate for the police to threaten a child and his family. He also said that MSDHS officers said they will be visiting him at home to ‘investigate his behaviour.’

13-year-old Oia is a regular protest-goer. He was previously charged with violating the Emergency Decree because he passed by a protest while riding a bicycle home on 13 September 2021. He was also charged with violation of the Emergency Decree and joining an assembly of 10 or more people threatening violence when he joined a protest on 15 April 2022.