A statement from the protesters who have been violently dispersed by the police force on 18 November underlines the purposes of the movement and demands responsibility for grieve losses. 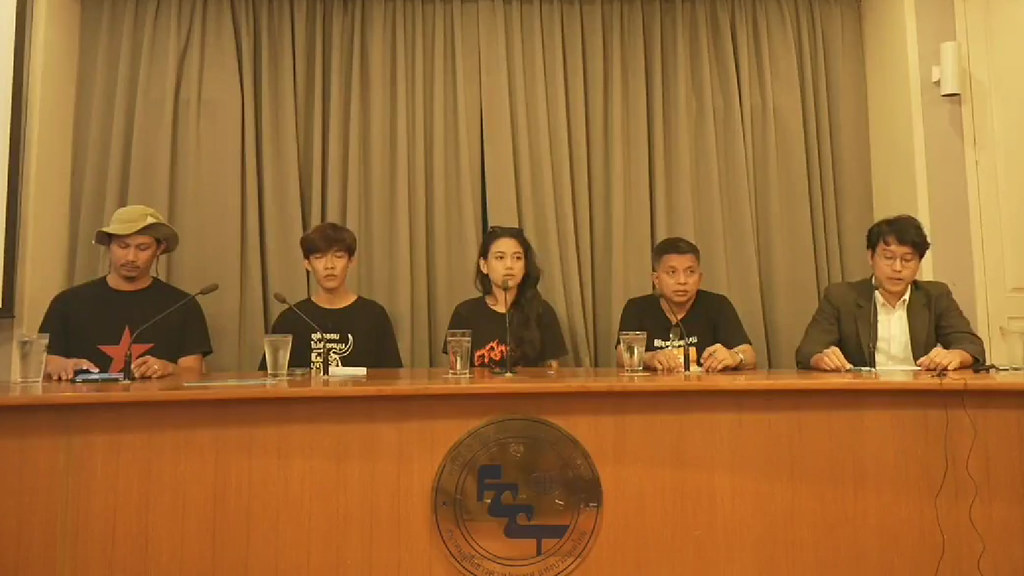 Citizens Stop APEC 2022 Coalition address their demands in a press briefing on 28 November 2022.

"Citizens Stop APEC 2022 Coalition" is a gathering of more than 75 organisations representing farmers, workers, poor people, grassroots groups and local people committed to fighting dictatorship and promoting democracy across the country. We monitored the recent Asia-Pacific Economic Cooperation (APEC) 2022 Forum in Bangkok along with the APEC Economic Leaders Summit. We also organised parallel forums between 16-17 November 2022 at the Bangkok City Hall plaza to consider the needs of people affected by state development policies.

On November 18, 2022, we announced the formation of a movement to pursue three demands: 1) a suspension of the government’s “Bio-Circular-Green” (BCG) economic policy and facilitating legislation; 2) the removal of Prime Minister Prayut Chan-o-cha from chairmanship of the meeting chair on the grounds that he has no legitimacy to sign an agreement with APEC leaders; and 3) the dissolution of parliament and drafting of a new constitution by the people to pave the way for elections and create true democracy. In pursuing these demands, our rally was violently dispersed by crowd control police who arrested 25 people and injured many at the scene.

Why protest against APEC?

Many mottos have been used to promote the APEC Forum - Open. Connect. Balance; Create economic opportunities for all sectors in society; Promote growth that emphasises balance in all aspects rather than profit; and Responsible business operations with environmental considerations. Thailand’s BCG model, proposed during the forum fit none of these. Instead, it has been designed to benefit government agencies and capital groups.

The Thai government made great efforts to have APEC member countries sign off on the project. Following cabinet approval of a draft Bangkok Goals for a BCG Economy, a national development BCG Model action plan was drawn up for 2021-2027, by a group of former high-ranking civil servants and representatives of the country’s major industries. Unsurprisingly, the BCG strategy secures benefits for large capital groups and the bureaucratic state at the expense of the general public.

1) The bio-economy policy opens the way for genetic theft. This allows capitalists to easily monopolise the markets for seeds and the development of biotechnologies such as genetically-modified organisms (GMOs) with a biosecurity act. The so-called GMOs Act includes an attempt to amend the Plant Varieties Protection Act B.E. 2542 to facilitate seed monopolisation.

2) The circular economy policy, which opens the way for the growth of energy crops for power generation, will result in a reduction of food crops, lead to food insecurity problems and generate dangerous environmental pollution. Plans call for the construction of a large number of biomass power plants and the importation of plastic waste.

3) The green economy policy is an opportunity for the government to push a carbon credit trade policy to address the climate change crisis. Rather that regulating industrial capital, the real source of carbon emissions, it will place additional burdens on peasants, labourers, and the poor in general. Instead of solving the problem at its root, the state will snatch public land for reforestation projects to serve as carbon credit areas for capital groups. The goal is to increase the  country’s green areas by up to 55%.  A policy to increase forest areas by 40% that is currently being implemented by the government’s National Forest Policy Committee has already resulted in land-grabbing, with a huge impact on public livelihoods.

When the Citizens Stop Apec 2022 coalition organised events and rallies on 18 November to demand that the state review its policies, crowd control police responded by subjecting them to unnecessary force. At least 31 people were injured, including Phayu Boonsophon, a protester, was shot by rubber bullets and lost his right eye.

At least three members of the press were injured, and 26 people were held in police custody. There were reported cases of surveillance against activists on Facebook and attempts to request a bail revocation against the activists facing royal defamation charges who joined the recent APEC 2022 protest.

Our demands to APEC members state

We call on APEC member states to take responsibility for the human rights abuses that happened at the APEC 2022 meeting by pressuring the Thai government to follow the demands of the Citizens Stop Apec 2022 Coalition. We also ask that your country abolish the collective agreements made Thailand during the APEC meeting that are likely to effect our people.

You should take into account the principles of Human Rights as well as Business. You should study whether your agreements are likely to increase human rights violations by the Thai state and/or large capital groups as they compete for public resources. People wanted to participate and express our opinions at the meeting but the government used violence to disperse the protests.

With respect to the 18 November Violence, the “Citizens Stop Apec 2022 Coalition" demands that:

1. The Royal Thai Police publicly admit their wrong-doing and apologise for the 18 November 2022 incident.

2. The Royal Thai Police and relevant parties take responsibility for what happened and compensate the injured for both physical damage and lost items.

3. The Royal Thai Police and related divisions accelerate the investigation into those responsible for the dispersal, release their finding and punish all guilty parties.

4. Reform the assembly control process to support the exercise of rights and freedoms of assembly for the people. To guarantee that there will be no more violent police incidents against the people, the names of the officers charged with assembly control must be disclosed every time. All officers, in uniform and undercover, must be identifiable to prevent undercover officers from creating violent situations. Rubber bullets should stop being used for crowd control.  International human rights principles in assembly should be adhered to along with laws and regulations conducive to people's rights to freedom of assembly.

We affirm that our assembly is peaceful without weapons according to international standards.  We want to participate by submitting demands and policy comments to the leaders at the APEC meetings and to the Gen Prayut government because "We are not just consumers. We are also people affected by the APEC policies".