Civil Court to summon police to testify on protest crackdown

The Civil Court has agreed to summon police representatives to testify on the crackdown on the 18 November anti-government protest, which left at least 4 reporters injured.

A video clip showing crowd control police running at a group of reporters gathering on the footpath and hitting them with shields and batons during the 18 November protest crackdown.

Last Friday (18 November), protesters attempted to march to the Queen Sirikit National Convention Centre, where the Asia-Pacific Economic Cooperation (APEC) Leaders’ Meeting was taking place, to protest what they see as the Thai government’s attempt to boost its legitimacy on the international stage and the lack of participation from civil society in determining policies being proposed at APEC meetings.

They were also protesting the Bio-Circular-Green (BCG) Economy Model proposed by the Thai government at the APEC meetings due to concerns that the model would worsen community right issues facing marginalized and vulnerable groups, would take away their resources and land, and is an attempt at greenwashing the country’s major corporations with its carbon credit model.

However, as they were approaching the Democracy Monument, the protesters were stopped on Dinso Road by units of crowd control police. Twice, the police forcibly dispersed the protesters, leaving many injured, including one who was shot in the eye with a rubber bullet, and at least 4 members of the press. 25 people were arrested, including a citizen journalist livestreaming for The Isaan Record.

On Tuesday (22 November), the online news agency The Matter, whose reporter Sutthipath Kanittakul was assaulted by crowd control police while livestreaming the crackdown, filed a request with the Civil Court to have police commanders summoned to explain the crowd control police use of violence against members of the press.

The request was part of an ongoing lawsuit the news agency filed in August 2021 against the police after one of its photographers was shot with a rubber bullet while covering a protest on 18 July 2021 along with Plus Seven reporter Thanapong Kengpaiboon. The Civil Court subsequently granted an injunction ordering the police to exercise caution and refrain from committing violence against the media during its crowd control operations. The Matter’s senior editor Pongpiphat Banchanont said that the request also asked the court to rule whether the police had failed to obey the injunction.

On Thursday (24 November), the Human Right Lawyers Alliance, which is providing legal assistance to The Matter and other reporters injured during the protest, said that the Civil Court agreed to summon police representatives to testify over the use of violence to disperse protesters. The hearing will take place on 17 January. 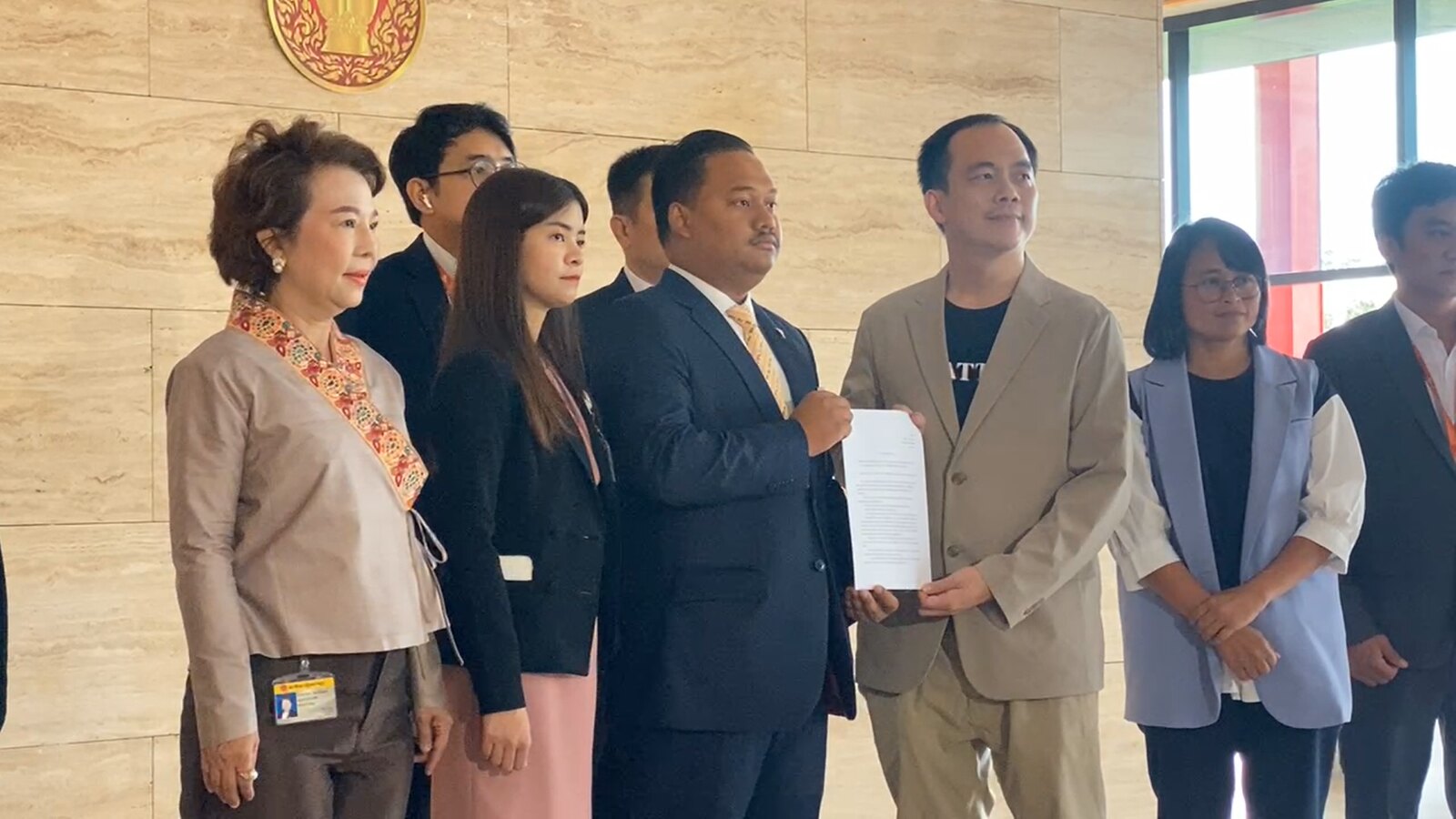 Pongpiphat Banchanont (third from right) submitting his petition to the House Committee on Political Development, Mass Communications and Public Participation. (Photo from The Reporters)

Pongpiphat also met with the House Committee on Political Development, Mass Communications and Public Participation on Thursday (24 November) to file a petition asking the House Committee to investigate the police operation on 18 November and find out why crowd control police used such a level of violence to disperse protesters, injuring many protesters and reporters.

The petition asks that the House Committee summon the national Police Commissioner, the Metropolitan Police Commissioner, and commanding officers in the crackdown to explain the crackdowns and how they intend to prevent such an incident from taking place again. It also asks that the House Committee summon documents relating to the police operation, including the number of officers, the police crowd control policy, the equipment used during the dispersal, and orders forming committees to investigate the police use of force to crackdown on protests, leading to injuries for both protesters and reporters, since 2020.

Pongpiphat noted that the TJA met with the Metropolitan police chief and the police spokesperson twice in 2021 to discuss safety measures for journalists covering protests. He asked whether the level of violence used during the 18 November crackdown was a matter of policy and commanding officers’ orders rather than a matter of individual officers’ actions.

Move Forward Party MP and committee member Nattacha Boonchaiinsawat said that the committee is already planning to compile evidence relating to the crackdown so that it can summon the officers involved for an inquiry.