An online news agency is filing a fresh court challenge aimed at reining in the police’s documented aggression against members of the press following the 18 November crackdown on anti-government demonstrators, which saw a reporter on the ground being beaten and a bottle hurled at a photographer’s face from the direction of the police. 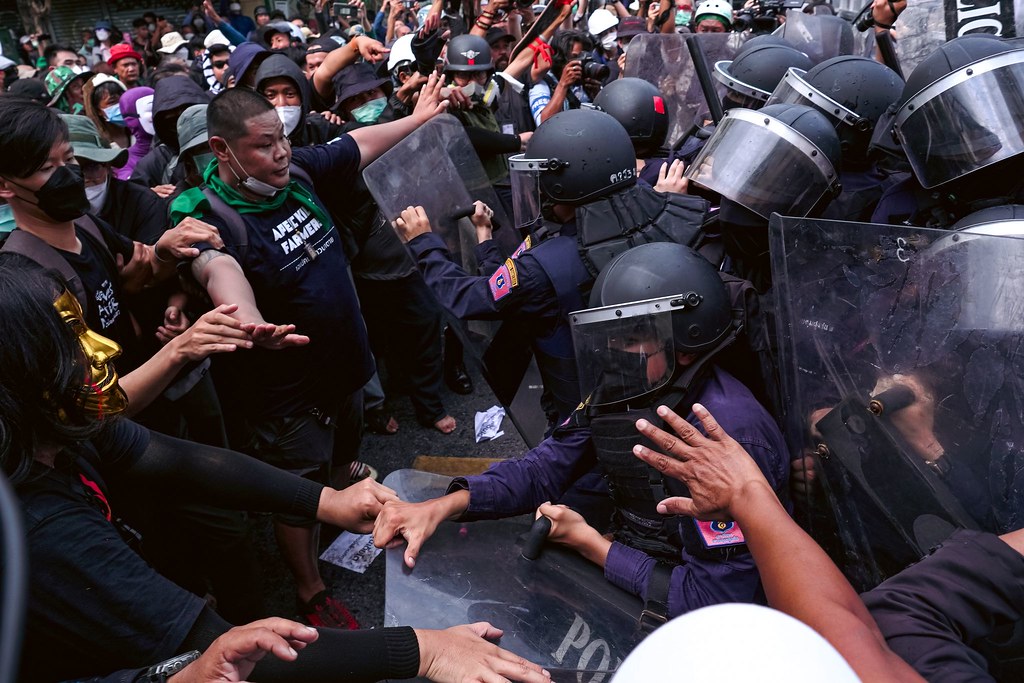 A protester spreads his arms during clashes between anti-government demonstrators and riot police in Bangkok on 18 November 2022.

The news agency whose reporter was mobbed and beaten by riot police while covering a recent protest filed a fresh legal action against the national police force on Tuesday.

The filing submitted by The Matter asks the Civil Court to summon police commanders to explain themselves over the outburst of violence against journalists and photographers on Friday. At least four members of the press were reportedly injured by police actions, including a stringer photojournalist whose face was struck with a glass bottle.

“We want police to have standards and take responsibility for their actions,” Pongpiphat Banchanont, an editor for The Matter, told Prachatai English before the court proceedings began. “So that the police, as an organisation, will have credibility, respect for the media, and respect for the constitutional right to peaceful assembly.”

The move is part of an ongoing lawsuit filed by The Matter against the Royal Thai Police back in 2021. It sought financial damages for reporters and photographers struck by police baton rounds during clashes between security officers and anti-government protesters. The court subsequently issued an injunction ordering the police to exercise caution and refrain from committing violence against the media during its crowd control operations.

Pongpiphat said today’s court filing will ask the court to rule whether senior police commanders had failed to obey the injunction handed down last year. It is unclear when the ruling will be made. As of publication time, the case was accepted by the court, but no decision had been reached.

On Friday, several hundreds of demonstrators attempted to march to the venue where the Asia-Pacific Economic Cooperation (APEC) summit was being held. The rally turned violent when police dispersed the protesters, who accused the government of whitewashing its human rights records at the summit.

Dozens of police and protesters were wounded in the violence on Friday. From the details that emerged so far, all of the injuries suffered by members of the press were caused by the police. Officers were filmed stomping a reporter on the ground, smashing another with a riot shield, and beating a photographer with a baton. A bottle hurled from the police line also hit a photographer for Reuters in the face.

Photographer hit in the face by glass bottle at protest outside APEC summit in Bangkok, Thailand this morning #ม็อบ18พฤศจิกา65 #APEC2022THAILAND #APEC2022 pic.twitter.com/NvvXQ10GTS

Online news agency The Matter said in a statement that one of its reporters was shoved to the ground by police officers wielding shields and batons, and then kicked multiple times after he fell down, despite wearing a media armband and shouting that he was a member of the press.

“The Matter condemns such action and urges relevant authorities to convene a committee to investigate the incident, in order to hold the perpetrators responsible,” the company said on Friday evening, adding that it reserved the rights to take further actions to protect its staff and freedom of the press.

Although Pongpiphat told Prachatai English that the trial will be lengthy and the chance of victory uncertain, he hopes the lawsuit will send a loud and clear message to the police: behave yourselves.

“It could take up to 10 years,” Pongpiphat said. “But we want the police to know that they have to be held accountable in their exercise of power. They can’t just do as they please.”

Although the police spokesperson maintained that Friday’s crackdown was in accordance with the laws and approved measures, photos, videos and eyewitness accounts paint a picture of police officers venting their frustration on members of the press without visible attempts by their supervisors to restrain them. 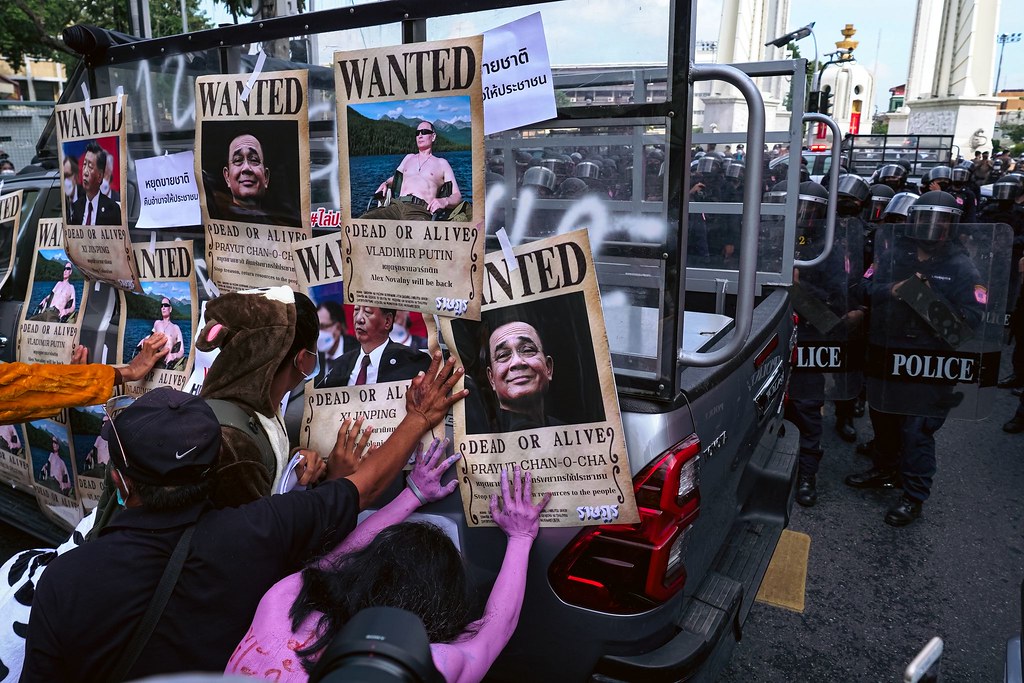 Protesters push at a police vehicle moments before anti-government demonstrators and riot police clash in Bangkok on 18 November 2022.

One of the people speaking out against police actions is a senior reporter who helped the Thai Journalist Association organise its safety training programs for field reporters. Sataporn Pongpipatwattana said the police violence on reporters at the scene on Friday didn’t appear to be a case of collateral damage, but instead showed an intent to intimidate the press through violence.

“As a person who conducted safety programs for the press for many years, it is my opinion that in this case, reporters were doing their job by reporting the situation based on facts, and they were clearly identified as such,” Sataporn wrote online. “They weren’t injured by stray objects in the chaos. They were targeted and assaulted.”

He went on, “This is considered intimidation of the press, and an attempt to block the media from reporting the news. If they resort to this [degree of violence], no matter how many safety courses we take, they won’t help us defend ourselves at all.”

The Thai Journalists Association’s press freedom committee also published a damning preliminary finding, which was partially based on testimonies from injured reporters.

“[We] were informed that actions from some of the police officers lacked self-restraint, potentially amounted to intimidation of media professionals at the scene, and ran against the police’s own tactical guidelines on crowd control,” part of the statement said.

The association, whose leadership includes a reporter for Prachatai English, also said its representatives will file a petition to the national police force demanding an investigation into the violence.

Protest organisers said at least 21 demonstrators were wounded in Friday’s clashes, including a man who was reportedly shot in his eye by a rubber-tipped bullet. Another 26 people were arrested, including a citizen journalist, organizers said. The police said in a statement that 14 officers were injured.

Police officials were quick to downplay allegations of using excessive force or targeting the press. Police spokesman Pol Maj Gen Archayon Kraithong said the force will investigate allegations of unsanctioned violence against the media, adding that “a conclusion cannot be made in haste.”

He also said police were deploying anti-riot equipment in accordance with approved guidelines because protesters were trying to march outside an area authorised for the rally.

Police commissioner Pol Gen Damrongsak Kittipraphat said members of the media injured by police actions may seek compensation from the force, but did not elaborate on the procedures. He also appeared to suggest that the press simply had to accept the risks of such injuries.

“If a demonstration has the potential for clashes and scuffles with police, the media has to be careful and look after themselves, because it’s difficult to control the situation,” Pol Gen Damrongsak said at a news conference. “Please have some sympathy for the police, because there were a lot of reporters, including Youtubers … so when an incident breaks out, there might be some mistakes.”

Those “mistakes” included a moment when The Matter’s correspondent was filming a group of police officers rushing to a demonstrator who was on the ground. He was soon confronted by police officers, who struck him with a baton and shoved him to the ground, before stomping on him with their boots.

“I’m the real deal!” one policeman shouted in the video, using an expletive. The reporter could be heard identifying himself as media and pleading with them to stop.

In other videos, police officers armed with shields and batons can be seen charging at a group of reporters and photographers who were standing on the sidewalk, away from the main line of contact between riot police and the protesters.

A photographer for Top News was struck in his face by a baton, his eyeglasses damaged by the blow. Another policeman shoved his shield at a reporter for Prachatai English, wounding his hand.

Perhaps the most serious injury experienced by the press on Friday belonged to Chalinee Thirasupa, the Reuters photographer, who reported on Twitter that doctors diagnosed her with haemorrhage in the eye after being hit in the face by a glass bottle.

Based on a photo Chalinee posted on her social media, the impact appeared to miss her pupil by a mere millimeter.

“Went to see an eye doctor. I’m safe. Off work for a week. Thank you everyone,” Chalinee wrote on her Twitter in Thai, before repeating the same message in English.

The photojournalist was not available for an interview by publication time, but her tweets said she had evidence in her camera implicating the police as the perpetrators who threw the projectile at her.

“The glass bottle came from the back of the police line, 100 percent. I had a photo of the face of the person who did it. Don’t worry. No more doubt,” she wrote.

More legal repercussions against the police may follow, as Chalinee hinted at a lawsuit in one of her replies to a Twitter account who posted a video showing the bottle flying into her face. “Please let me know how to reach the admin so I can ask for the video to be used as part of the prosecution in the court,” she wrote.

A statement released by the Thai Journalist Association offered pro bono legal assistance to any members of the media injured by police actions on Friday who wish to sue for damages.