On Friday (18 November), several reporters were injured and a citizen journalist was assaulted and arrested during a violent dispersal of a protest march that was heading towards the APEC meeting at the Queen Sirikit National Convention Centre (QSNCC). 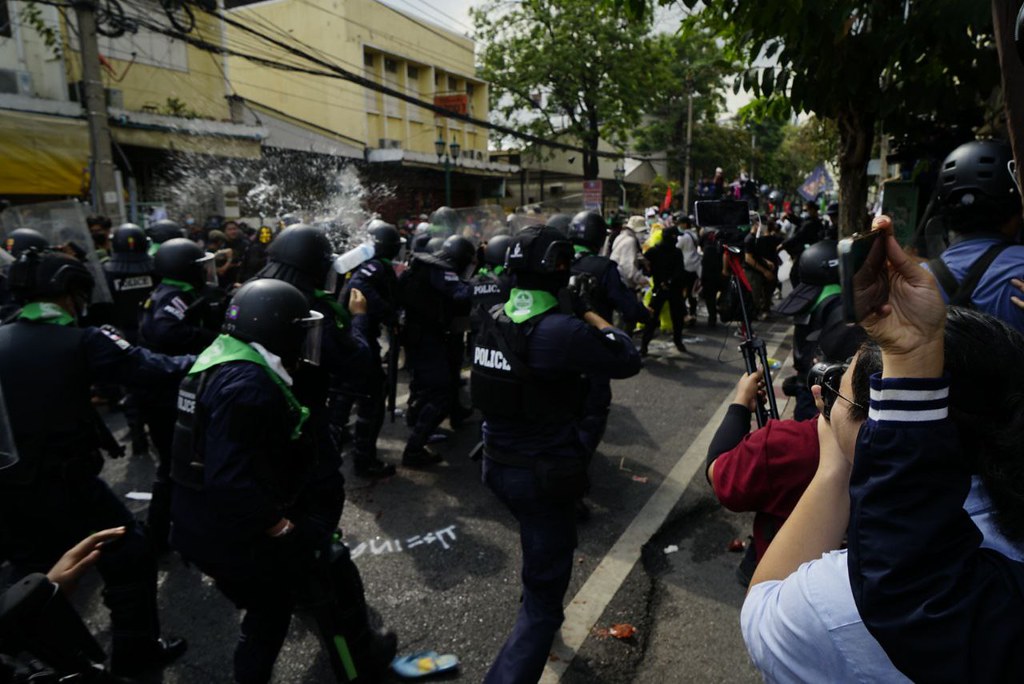 At 10.10, after protesters moved a police truck blocking Dinso Road, crowd control police forcibly dispersed the crowd, hitting both protesters and reporters with shields and batons. A video clip taken at the time shows police in full riot gear running directly at a group of reporters and photographers gathered on the footpath, pushing them with shields and hitting them with batons. Most of the reporters in the clip were wearing the blue press armbands issued by the Thai Journalists Association (TJA) to identify members of the press covering protests.

Prachatai English reporter Yiamyut Sutthichaya sustained a minor injury to his finger after being hit by a shield while filming the clash. Another photographer on the footpath from the right-wing news channel Top News was also hit by shields and batons while photographing operation. He sustained minor bruises, and his glasses were broken.

A video clip filmed by Prachatai English reporter Yiamyut Sutthichaya as crowd control police charged into the group of reporters gathering on the footpath, hitting them with shields and batons.

At around 12.45, during a second violent dispersal of protesters on Dinso Road, Sutthipath Kanittakul, a reporter from the online news outlet The Matter, was assaulted by crowd control police while livestreaming the protest. In a video clip taken from the livestream, a crowd control officer can be seen pushing Sutthipath away from a protester lying on the ground. He was then hit with a shield until he fell, at which point the officers kicked him and hit him with their batons while threatening him. The reporter was heard telling the officers that he was a member of the press wearing the TJA’s press armband.

A statement issued by the Matter after the attack condemned the police action and called on the authorities to investigate and hold those responsible to account. Noting that several reporters were injured during the crackdown, the outlet raised questions about whether the police had used excessive force in violation of international protocols.  Stressing that freedom of assembly is a constitutional right, it also said that it would steps to protect the welfare of its employees and press freedom. 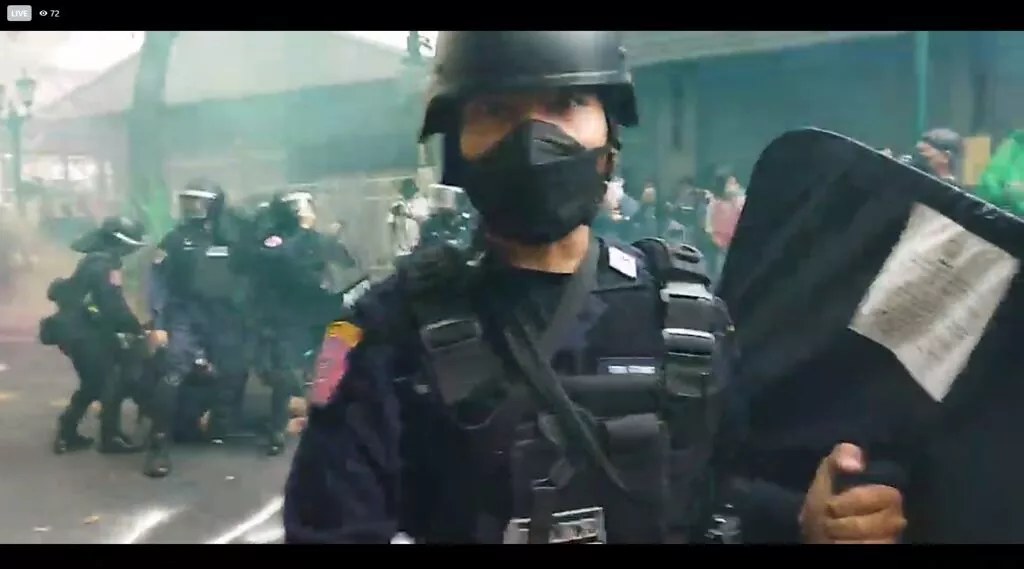 A screenshot from The Matter's livestream shows a crowd control officer approaching The Matter reporter Sutthipath Kanittakul while he was livestreaming the protest before hitting him with a shield.

The statement added that the attacks broke an agreement reached by the representatives of media organisations and the metropolitan police in 2021 and were also a violation of a Civil Court order issued in August 2021, which stated that police must exercise caution when dispersing protests and keep in mind the safety of on-duty reporters.

The Civil Court ruling stemmed from a lawsuit filed by Plus Seven reporter Thanapong Kengpaiboon and a photographer from The Matter in August 2021 after they were injured with rubber bullets while covering a protest on 18 July 2021. It was filed against the Royal Thai Police, then-police chief Pol Gen Suwat Jangyodsuk, then-Metropolitan Police Commissioner Pol Lt Gen Phukphong Phongpetra, and then-Protection and Crowds Control Division Commander Pol Maj Gen Manop Sukonthanapat for the unlawful dispersal of the protest on 18 July 2021.  The police fired rubber bullets, intentionally using excessive force to disperse the protest.

Reuters photographer Chalinee Thirasupa receiving first aid after a glass bottle was thrown at her from behind the police line. It was initially reported that she was cut with broken glass, but a video clip circulated on Twitter shows that an object was thrown at her.

At around 12.45 on Friday (18 November), Reuters photographer Chalinee Thirasupa was also injured after someone from behind the police line threw a glass bottle at her head. In a video clip circulated on Twitter, Chalinee can be seen standing with several other photographers behind a police truck blocking Dinso Road.  She was photographing the police from behind the truck when the bottle was thrown at her head. A photograph of Chalinee receiving first aid makes it clear that she was wearing a press ID and the TJA’s press armband.

Chalinee sustained a minor eye injury,  later posting on her Facebook page that she had seen an ophthalmologist and did not require surgery or stitches but would need to take a week off work. 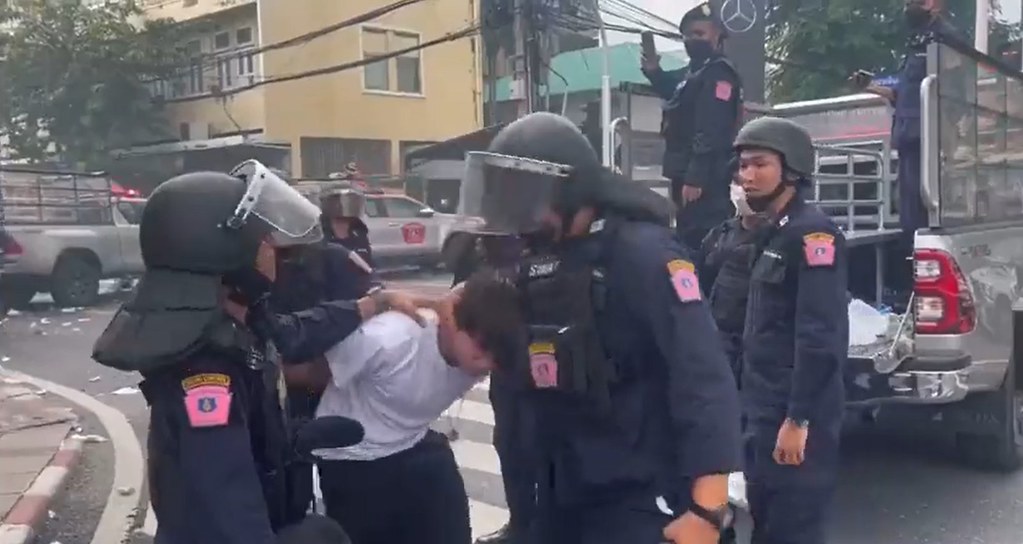 Waranyu Khonsathittum, a citizen journalist for The Isaan Record, was arrested after being assaulted by crowd control police.

Meanwhile, Waranyu Khongsathittum, a citizen journalist livestreaming for The Isaan Record, was assaulted by several crowd control police, who then arrested him, even though he identified himself as a reporter. In a video clip, crowd control officers can be seen kicking Waranyu.  Thai Lawyers for Human Rights (TLHR) later reported that he sustained an injury to his head and has bruising on his body, and that he was made to wait at least 2 hours with only a bandage around his head before he was taken to a hospital for treatment.

Waranyu was taken to Thung Song Hong Police Station along with other protesters arrested during the crackdown. The Isaan Record issued a statement calling for his immediate release and demanding that police stop using violence against reporters and respect freedom of the press.

Accoring to the Isaan Record, Waranyu is part of its citizen journalist programme aimed at training participants to report in a way that reduces conflict and promotes democracy in Thailand.  He was assigned by his editor to cover the protest.

Waranyu was charged with participating in a gathering of 10 or more people and causing a breach of public peace by participating in an act posing the threat of violence, for not dispersing when ordered to do so by an official, and for not complying with an officer’s order given under the Public Assembly Act. He was granted bail on a 20,000-baht security predicated upon the condition that he refrain from joining any political demonstration, and encouraging others to join gatherings likely to cause public disorder.  He was released at around midnight on Friday (18 November) along with 22 arrested protesters.

Teeranai Charuvastra, the TJA’s vice president for press freedom and press reform, expressed concern about police behaviour.  There were no reports of officers being threatened or assaulted by field reporters.  The injured journalists were not obstructing police operations and all were wearing press IDs. He concluded that the injuries sustained were not accidental but rather an effort by police to prevent members of the press from covering the protest.

Teeranai called on relevant authorities to investigate the attack, inform the public of the facts, and punish those responsible.  He also demanded compensation for the injured reporters.

Teeranai reiterated that members of the press have the right to report information to the public, adding that any attempt to intimidate or prevent them from doing so was a violation of the people’s right to information. He said that TJA’s press freedom subcommittee will be meeting on Sunday (20 November) to discuss how they can pressure the authorities to launch any investigation and what additional measures should be taken to reduce the risk for field journalists.

The TJA reported on Sunday (20 November) that its press freedom subcommittee will be filing a petition with the police chief to call for an investigation into the violence against reporters, and that any field reporter who were injured or whose equipment was damaged while covering the 18 November protest and wish to press charges against any relevant authority but did not have the money or a lawyer may contact the TJA for support by sending an account of what happened, as well as evidence such as photos, video clips, or a medical certificate to [email protected].

Meanwhile, police chief Pol Col Damrongsak Kittiprapas told reporters visiting the media centreing at the QSNCC that, by stand in front of protesters, journalists often made police’ operation more difficult. He also said that reporters covering protests should be careful and take care of themselves because it was difficult to control the situation; “mistakes can happen” when there are many reporters and also some YouTubers who do not stay in line. He added that the police will check the “mistakes” that happened.