Home » Fame and a wreath: The price Amnesty International pays for addressing sensitive issues in Thailand

Fame and a wreath: The price Amnesty International pays for addressing sensitive issues in Thailand

The Thai office of Amnesty International over the past few months has increasingly turned to tackle more domestic human rights issues. An interview with the Country Director reveals that this decision has had a great impact, even threatening the organization’s existence, and including death threats against Amnesty personnel. 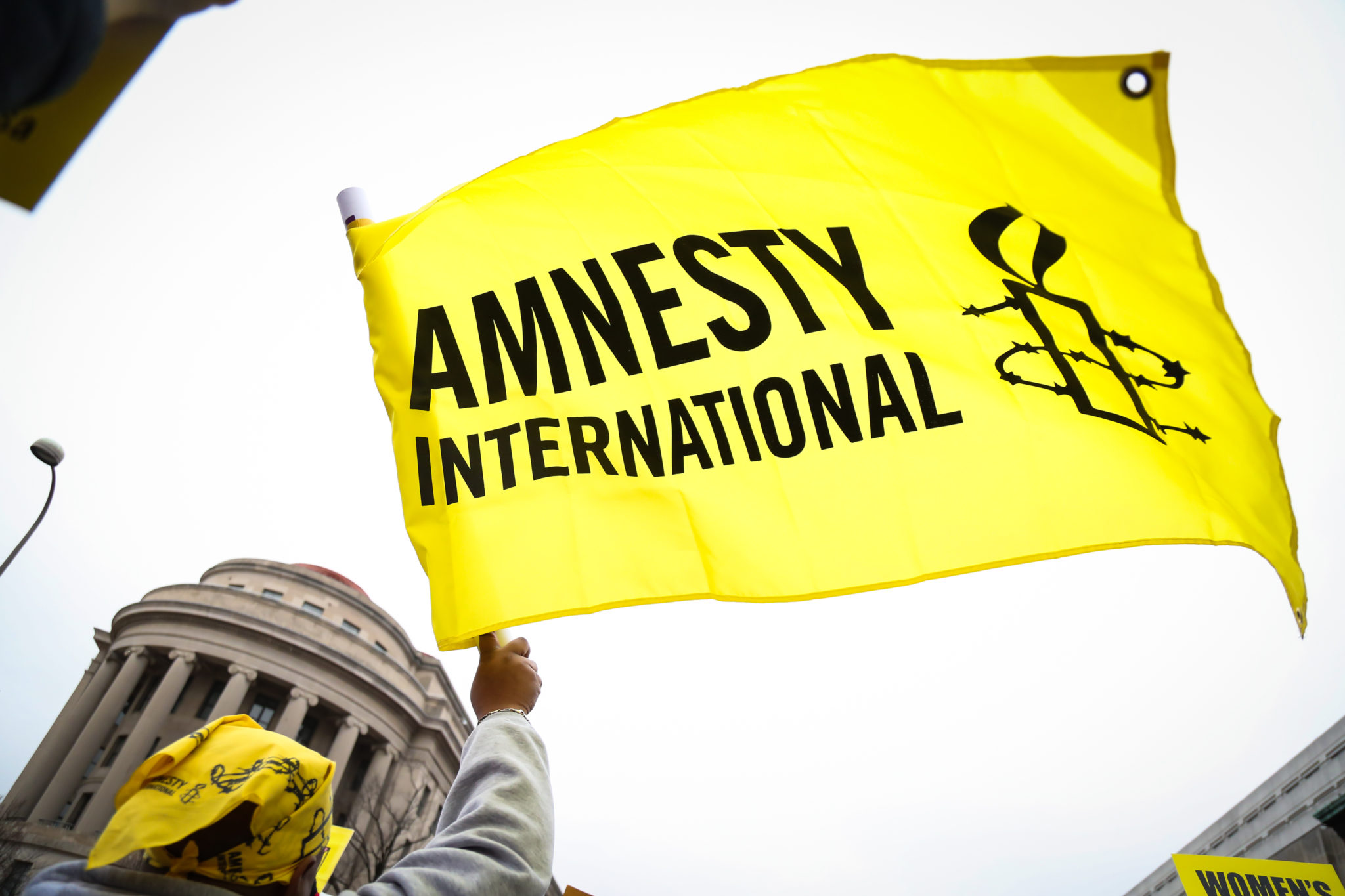 Since its first campaigns in Thailand about five decades ago, Amnesty International (AI) has exposed itself to threats because it has addressed human rights issues in Thailand, a country where human rights abuses are intertwined with state-sponsored violence, impunity, and public hatred spun by propaganda.

The threat has loomed even larger since the membership of the London-based international NGO decided less than a decade back to change its policy to allow its offices to address human rights issues in their own countries.

As questions remain over the reasons for and effects of this change, Piyanut Kotsan, Director of the AI Thailand office reveals the backlash where staff have been on the receiving end and the impact on the organisation’s continued existence in the kingdom.

Why did AI decide to look more inward?

AI is now 61 years of age. In the past, members and staff in any country mainly worked on human rights issues that were outside their country due to safety reasons. Avoiding accusations of political bias was another reason. 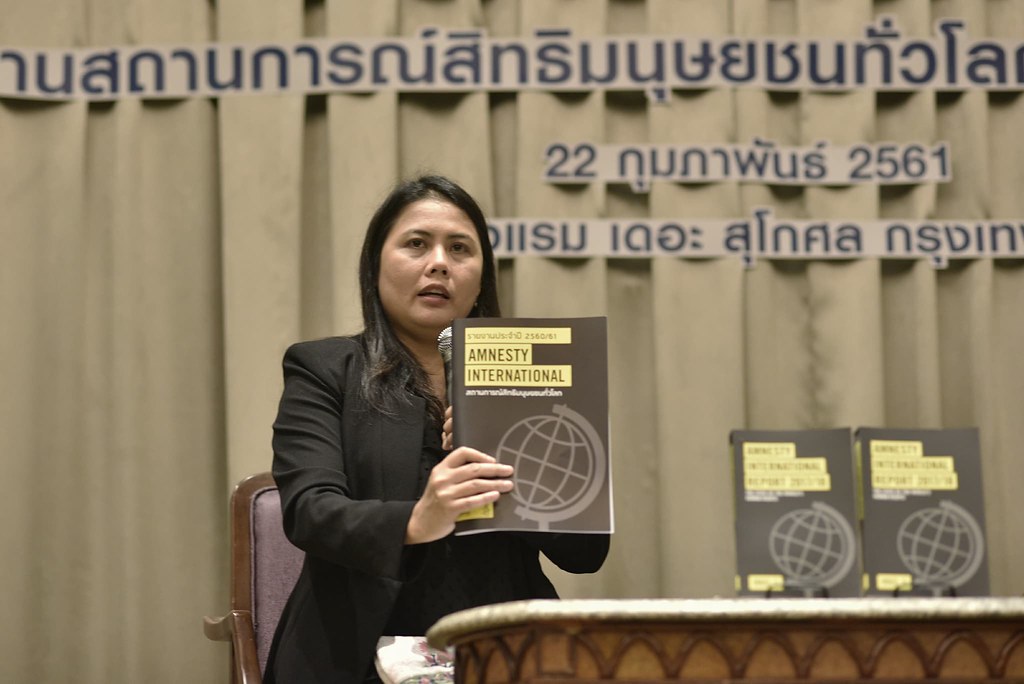 For us to pay more attention to domestic issues is something that gradually took place. AI around the world was being questioned by its members because if they did not address local cases, this would limit their feelings about being a part of the membership. Before the change, the nearest issue we campaigned on was about Myanmar. There would be researchers who looked into Thai cases but they would not be stationed in Thailand. Statements would be published from the International Secretariat (in London) and campaigns would be led from other countries’ offices.

We also wanted our members to feel that they have done something in the context of their own country. So we started to make a move little by little. We started working at the level of policy and the law and kept on doing more. Until the coup in 2014 we began to delve into issues in Thailand more. Surely there is a price to pay, but we still see ourselves working under the principle of human rights; it’s just that we stand on hotter ground.

According to Piyanut, AI offices around the world take different amounts of time before deciding to look more into its local issues depending on different contexts of safety and sensitivity. The offices in India and Hong Kong, for example, have been closed down after addressing sensitive issues in India and China.

However, AI still retains its stance of being a global citizen that can call out human rights problems everywhere in the world.

At what point should be counted as a milestone for AI Thai in addressing local issues?

AI started to be known in Thailand after the 6 October massacre when the organization campaigned about the arrested students. People, foreigners and Thais, have gathered unofficially and addressed human rights issues ever since.

But what that can be seen as a milestone, I think, was in 2003 when AI was registered as an association. Since then, we started to work more on human rights issues in Thailand such as violence against women and children and the death sentence. However, sensitive issues would still be handled by the London office, such as Thaksin’s war on drugs, the deep south, or the red and yellow shirt conflict.

Was the stance on the red and yellow shirts all decided from outside?

The statement was issued from the main office. AI Thailand issued one statement after a clash in August 2008. We received scrutiny for that so we started to be cautious, because while politics has shades, human rights does not. We stood for whichever side that was abused.

Lately, AI Thailand has also issued statements, but after discussions among ourselves. There were still some issues where we let the main office make position statements for safety reasons.

There have been security measures in place because of incidents we have faced in Thailand and elsewhere. In Thailand’s case, for example, on 26 September 2016 AI launched a report about torture in Thailand. The report was written by a researcher from London who came to do field study in Thailand. Eventually, the launch event was halted by the authorities, after we were told that it would affect the work permits of staff in Thailand.

At that time, journalists were already all waiting in the briefing room so we had to inform them what happened. Upon hearing the reason, the journalists showed even more interest and started interviewing the researcher in the hotel lobby. That evening, that researcher could not get back into the hotel because there were people waiting for them.

Recently there was also a campaign to drive us out of the country. 3-4 years ago, we also faced threats from people who disagreed with our campaign on the death sentence. Sometimes staff had to reconsider wearing AI shirts.

So it means that by addressing local issues AI really faces more threats?

Threats are regular. Something like laying a wreath in front of our office or announcing where our office is located and inciting people to come wreck it. Those threats were clearly seen when we addressed the death sentence issue in 2018. We were also labelled as being sponsored by foreign entities along with Human Rights Watch (HRW).

The latest example was in 2021 when Rung (Panussaya Sitthijirawattanakul) became the first Thai case under our biggest annual global campaign “Write for Rights” in which we invite members around the world to write letters of support. When we launched the campaign for Rung, it was at the time when the Constitutional Court ruled that the activists' demand to reform the monarchy amounted to calling for the abolition of the institution. 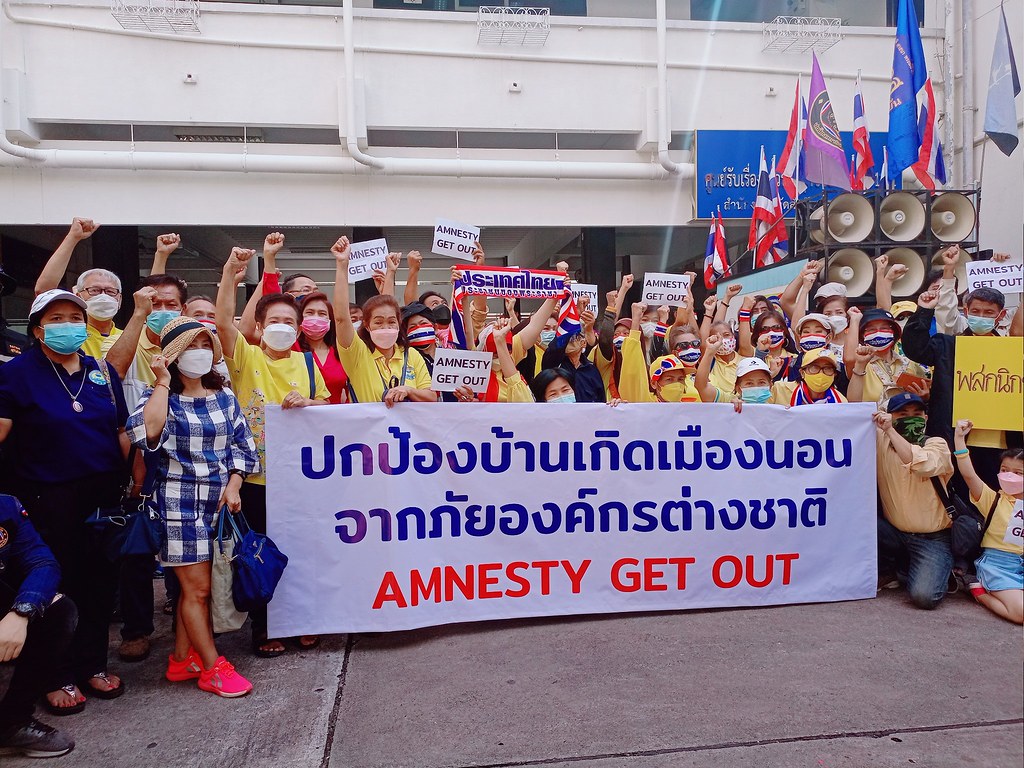 Groups of pro-monarchy people submit a petition to the government, demanding AI be driven off the country.

As a result, we saw waves of people demanding that we be driven out. It was not until the Prime Minister said in an interview that AI deserves scrutiny that we started to receive letters from the authorities summoning us for investigation, making our work more difficult. If it was football, it was like receiving a red card without stepping on anyone's leg.

Is there any difference you can see in the last couple years?

Greatly, and we were all so amazed. It is true in the numbers of people being threatened or abused for exercising their rights, but we also see changes. In the past, when we held some kind of seminar, there would only be the same group of people we knew. But in the last couple of years, we have seen new groups of people with diversity.

For example, when we held an event about the Black May event, something that took place 30 years ago and which is not as well-known as the 6 October massacre, new groups of people attended, such as highschoolers, science-major students, or artists. We feel like we have more networks or alliances.

I think social media plays a big role, by showing things beyond what the textbooks or adults say. That is why we can discover new groups of people, new types of campaigns.

Is there negative change then?

What we are concerned about is the safety of free expression. The risk from the Computer Crime Act or other laws still persists to gag us. Another concern comes from attitude issues. Take gender sensitivity for example. Not everyone who yearns for democratic change will understand gender sensitivity. Sometimes people will label one another. I feel that issues can be discussed in a respectful way. We should not be concerned or censor ourselves out of fear of being arrested or being tracked down.

Is there anything you want to raise regarding the upcoming APEC summit?

We know that the government will do everything through APEC to be recognised in international society. APEC has become the government’s hope of being recognised. The more hope, the more fear about people coming out to cause shame to the government. If any group comes out to take a stance, they will be exposed to risk.

During APEC, AI may address issues that member states should take heed of. If the government really wants to be accepted internationally, it must open a space for people to exercise their rights and freedoms because the government is subject to international rules regarding civil rights. Otherwise, it would become self-contradictory. No matter how nicely it organises the event, if it does not abide by its commitments, it will be hypocritical.

What will happen if AI is shut down tomorrow?

Even if the AI office is to be shut down, it does not mean our voice will be lowered. It may stir fear among other organisations, but there will be a tsunami that hits the government harder. We have members and supporters, and rights is not an issue that is limited to Thailand. If AI Thailand is to be shut down, imagine how much the incident will become news and be questioned by members all around the world. The ones who will become the target of this are the ones who shut us down.

If we are still in Thailand, we can still inform or create an understanding with the authorities, but if we are shut down, AI in other countries will not care about creating an understanding. They will question the government even more heavily.

Even if AI Thailand is shut down tomorrow, you cannot shut down the voice, or the support of regular people who want to see changes in rights. You cannot underestimate regular people who cannot stand injustice. They have power, even more than the guns or laws you use to shut them up. Because it is the will of the people, it cannot be easily wiped out.