Home » No penalties for police shooting rubber bullets at journalists, injuring one from Prachatai

No penalties for police shooting rubber bullets at journalists, injuring one from Prachatai

A letter has been issued by the crowd control police stating that the shooting of rubber bullets to disperse a protest in March 2021, when Prachatai journalist Sarayut Tangprasert was injured, was in line with the law and guidelines on the use of force. 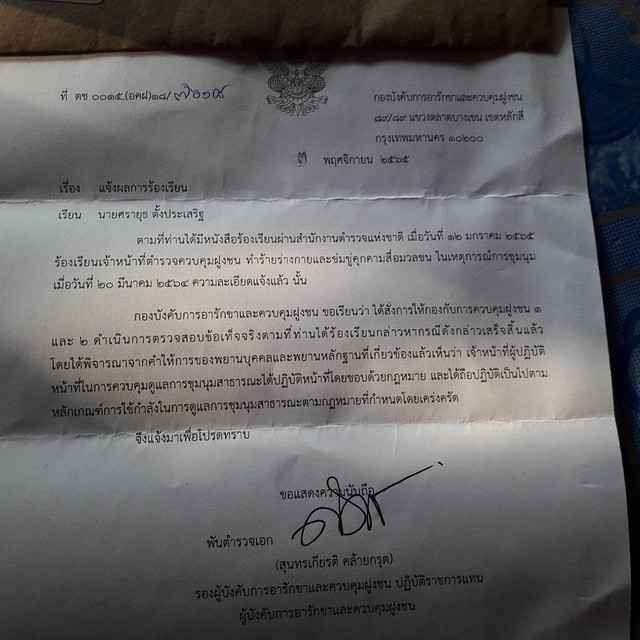 The letter from PCCD to Sarayut.

The letter was issued by Pol Col Sunthonkiat Khlaikrut), Acting Commander of the Protection and Crowd Control Division (PCCD), in response to a petition filed by Sarayut for an investigation into the incident.

According to the letter, the PCCD ordered the 1st and 2nd Crowd Control Divisions to conduct the investigation.

After considering the evidence and witness testimony, they found themselves to have acted legitimately.

“The officers who conducted control of the public demonstration performed their duty legitimately, and are held to have acted strictly in line with the criteria on the use of force in taking care of public gatherings as specified by law,” stated the letter.

On the night of 20 March 2021, Sarayut was shot in the back by a rubber bullet while livestreaming the crackdown at Kok Wua intersection, leading to Khao San Road. He was wearing a media armband provided by the Thai Journalists Association (TJA). His helmet was clearly marked “PRESS” in large letters.

The incident took place as Sarayut was standing among many reporters from other outlets. Beside Sarayut, journalists from Channel 8 and Khaosod were injured by rubber bullets, one on the head and one on the leg.

On 24 March, Sarayut filed a case in the Civil Court against the then National Police Chief Pol Gen Suwat Jangyodsuk, asking the Court to order the police to stop restricting the media’s duty to report in the field, to end the use of force in dispersing protests, and to conduct an internal investigation into the incident and punish any wrongdoing.

On the same day, the Court dismissed all the pleas, because they related to protests in the future rather than the one that did take place and led to the injury. The Court also stated that it had no power to order the police to conduct an internal investigation.

Nevertheless, he filed a petition to the Royal Thai Police to have the PCCD conduct an investigation which led to the letter.

During the past year, Sarayut has been summoned to testify to the PCCD once, with another testimony given at the police stage at Chana Songkram police station.

The legal processes have been facilitated by the Human Rights Lawyers Alliance, a network of human rights lawyers set up after the massive legal harassment against voices calling for political and monarchy reform in 2020.