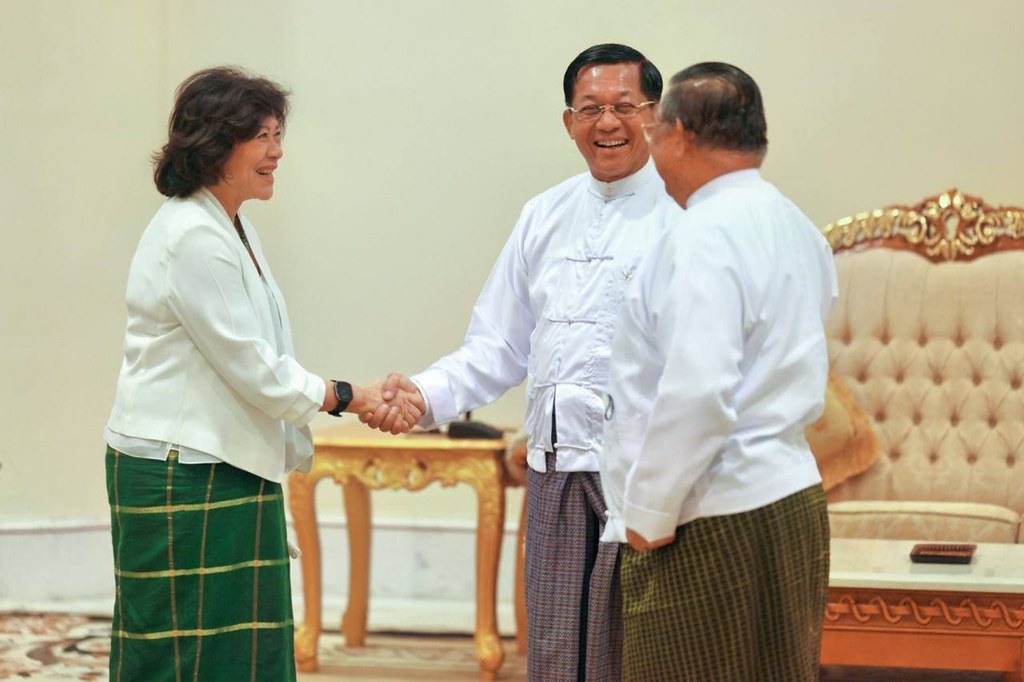 The junta chief did not immediately acquiesce to the UN proposals to reduce conflict and suffering.

Noeleen Heyzer conveyed requests on behalf of the UN and the Australian government that Sean Turnell, an imprisoned Australian economist and advisor to former State Counsellor Daw Aung San Suu Kyi, be immediately released.  Predicated upon the recognition of the SAC administration by UN members states, Heyzer also called for the establishment of a formal dialogue to improve the country humanitarian situation.  At present, neither SAC nor the National Unity Government (NUG) it ousted have a representative at the UN.

No demands, only requests

Addressing allegations of state-sanctioned violence, the special envoy asked the senior general “to halt the aerial bombing and to stop the burning of the villages and houses of the people.” According to the meeting transcript published by the Global New Light of Myanmar, Min Aung Hlaing responded by saying that they were merely targeting the location of the insurgents who attacked security forces and countering them.

In marked contrast to press reports of aerial bombings, village burnings, and the slaughter of civilians, he reportedly added that the Tatmadaw never initiated attacks and categorically rejected the allegations that they were burning villages because “the Tatmadaw always protects the people.”

Heyzer discussed the execution of prisoners, expressing hope that leniency and humanitarianism might forestall further executions.  She also raised the issue of underage prisoners, as documented in a UN report from the Office of the High Commissioner on Human Rights (OHCHR), but stopped short of accusing the state of detaining children. In response, Min Aung Hlaing reportedly said that executed prisoners had been “given the sentences they deserved” and had nothing to say about the detention of prisoners younger than 16-years-old.

In discussing the repatriation of refugees in Bangladesh back to Myanmar, the term ‘Rohingya’ was not used. Instead, the special envoy sought “safe arrangements for the return of refugees to the Rakhine State.” She was rebuffed by the senior general, who maintained that Myanmar would not accept refugees because of international demands but rather because they “can prove they reside in the country.”

According to Human Rights Watch, proof of residence remains difficult for the Rohingya people, who have been effectively denied citizenship and rendered stateless by Myanmar's 1982 Citizenship Law. Two previous repatriation attempts have failed due to concerns over safety in Myanmar, a problem exacerbated by the 2021 coup and subsequent conflicts.

Finally, Heyzer asked for and was denied an audience with Daw Aung San Suu Kyi, now imprisoned on corruption charges by the junta. Min Aung Hlaing claimed that she carried out “illegal activities” and failed to address the problem of “election fraud, therefore, legal actions were taken against her.” He made no mention of the NUG and the various ethnic minority groups arrayed against the ruling junta, other than to refer them as “terrorists.”

In the end, none of the UN’s requests were accepted.

One year on, little has changed

The military junta has ruled Myanmar since 1 February 2021, when a coup d'etat against the democratically-elected National Unity Government ousted it from power, forcing its leaders to flee the country or go to prison.

Two months after the coup on 24 April, ASEAN leaders met to discuss the situation, agreeing on what came to be known as the Five-Point-Consensus. In brief, it called for an immediate end to violence, dialogue among all parties, the appointment of a special envoy, allowing the special envoy to visit Myanmar to meet with all parties, and permitting humanitarian assistance from ASEAN.

While the senior general has subsequently weathered a storm of international criticism, significant action from international organisations such as the United Nations and the Association for Southeast Asian Nations (ASEAN) has yet to materialise.

Ming Yu Hah, Amnesty International’s Deputy Regional Director for Campaigns, decried ASEAN’s lack of progress and demanded that the organisation “prove it is not a toothless body but acts decisively to hold Myanmar’s military to account for its atrocious human rights violations.  The military has decades of blood on its hands and will continue to trample on the lives and rights of millions of people in Myanmar if it is not made to face the consequences of its crimes.”

The UN has not been exempted from criticism either.  On 4 September, anti-SAC protestors hung a banner reading “UN: Prove Your Existence for Justice” outside of the UN’s Yangon office - a call for action as opposed to empty words.

Over a year has passed since the coup. In its aftermath, the Myanmar government has systematically cracked down on peaceful protests, forced 700,000 people from their homes, killed over 2,000 people, and arrested almost 15,000 individuals according to Human Rights Watch. Dialogues between parties have fallen silent; UN and ASEAN envoys were unable to meet with NUG or ethnic armed organisation (EAO) leaders.

Remnants of the NUG, in the form of people's defence forces (PDFs) have formed a fragile alliance with EAOs and are collaborating to resist the Tatmadaw.  The ruling military junta has classified both groups as ‘terrorist’ organisation, a move that ASEAN special envoy for Myanmar, Cambodian foreign minister Prek Sokhonn, called unconstructive for developing a peaceful dialogue.

As a result of violence and instability in Myanmar, refugees from Burmese and ethnic minority groups have fled across the border to neighbouring Thailand. The UNHCR estimates that a total of 91,166 refugees from the country were residing in Thailand as of 1 August, 2022. Fighting has drawn closer to the border as well, as evidenced by a Myanmar MiG-29 fighter jet incursion into Thai airspace during a bombing run against ethnic Karen rebels on 30 June.

The execution of four anti-coup activists in Myanmar on 27 July triggered protests around Thailand, including one in front of the Myanmar embassy in Bangkok. It also sparked another round of international condemnations.

Although the UN special envoy called upon the Myanmar government to refrain from using capital punishment against political dissidents, the effort appears fruitless as dozens more have been sentenced to death.