A small parade was held by activists in Siam Square, Bangkok’s robust downtown area, in a bid to raise awareness about enforced disappearance. The marchers carried portraits of abducted activists, some of whom were later found dead. 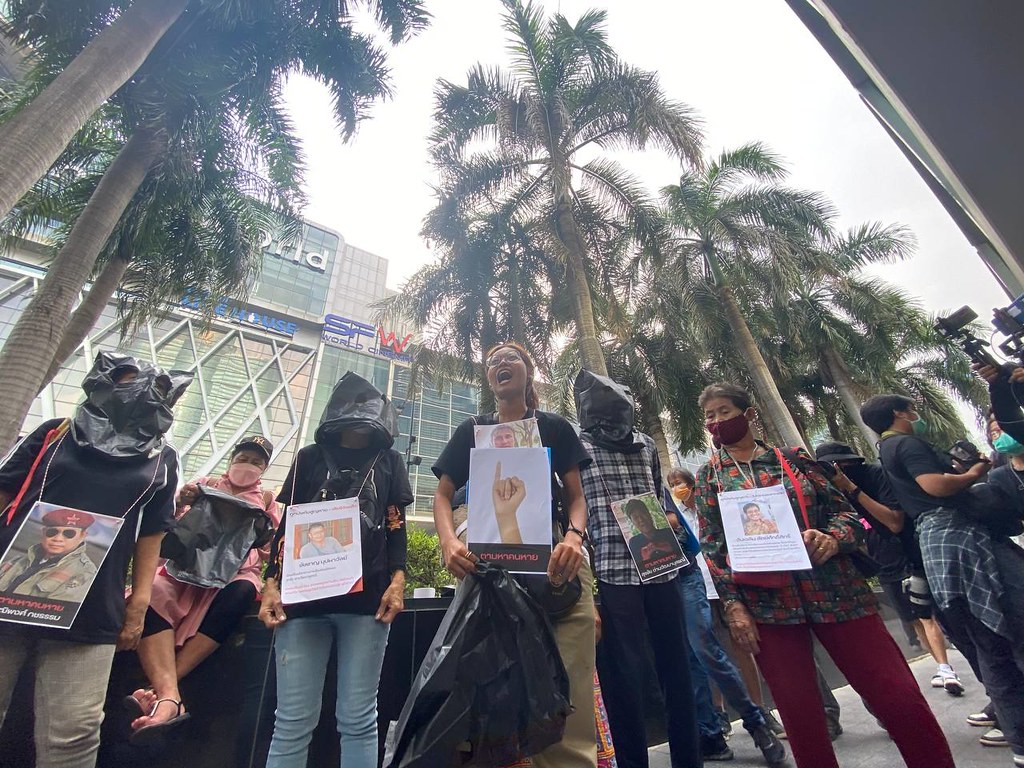 Event participants dress themselves up with plastic bags and placards with photos of the disappeared Thai activists.

To mark International Day of the Disappeared on 30 August, a dozen people affiliated with the Mok Luang Rim Nam student activist group gathered at Ratchaprasong Intersection. 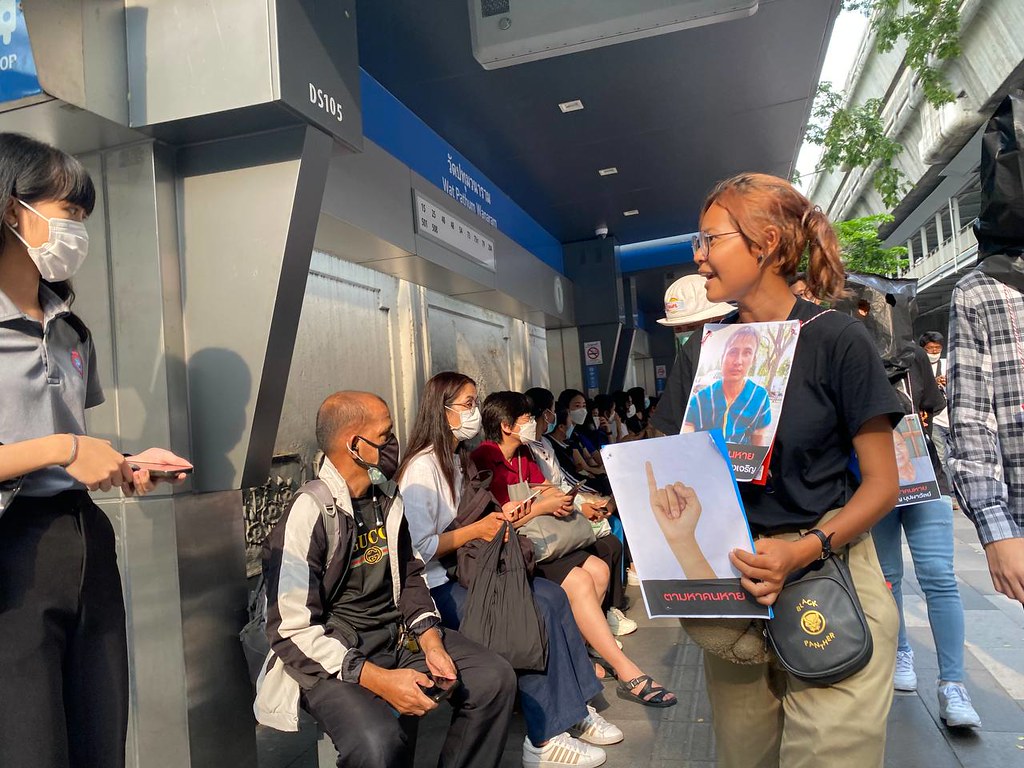 An activist Tanrutai addresses the enforced disappearance issues to passersby.

The group carried photos of Porlajee Rakchongcharoen, Surachai Danwattananusorn, Wanchalearm Satsaksit, and Siam Theerawut - Thai victims of enforced disappearance.  Hanging photos of the victims around their necks, some covered their heads with plastic bags, in imitation of a suffocation torture technique, as they walked through Siam Square.

Speaking on the occasion, Tanruthai Thaenrut said that the group wanted to raise awareness about enforced disappearance, to tell people that the government is ignoring these disappearances and silencing the people to make disappearance seem normal.

A 2020 report by the UN Working Group on Enforced or Involuntary Disappearances puts the number of victims of enforced disappearance in Thailand at 75 people. Since the 2014 military coup, 9 Thai political refugees living in neighbouring countries have gone missing. Two were subsequently found dead. There has been no progress in the investigations of the other 7 disappearances. 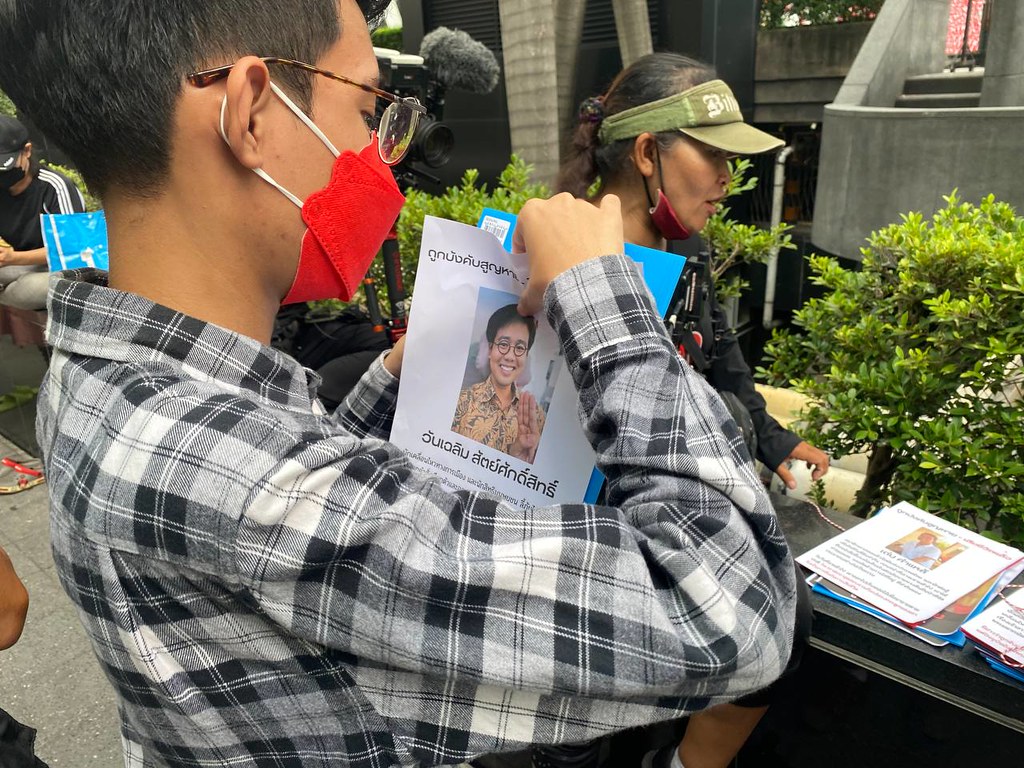 Photo of Wanchalearm Satsaksit, one of the disappeared activists in exile.

Uniformed police were seen standing guard at the National Police Headquarters on the way to Siam Square. Plainclothes police were reportedly taking photographs of event participants before the event started.

When they reached their destination, the Superintendent of Pathumwan police station arrived with other police officers, quietly monitoring the situation.

During the gathering, activists staged a performance symbolising an abduction. One of the participants placed a black bag over Tanruthai's head while she was giving a speech. Two others then carried her away while other activists shouted "Free our friends." 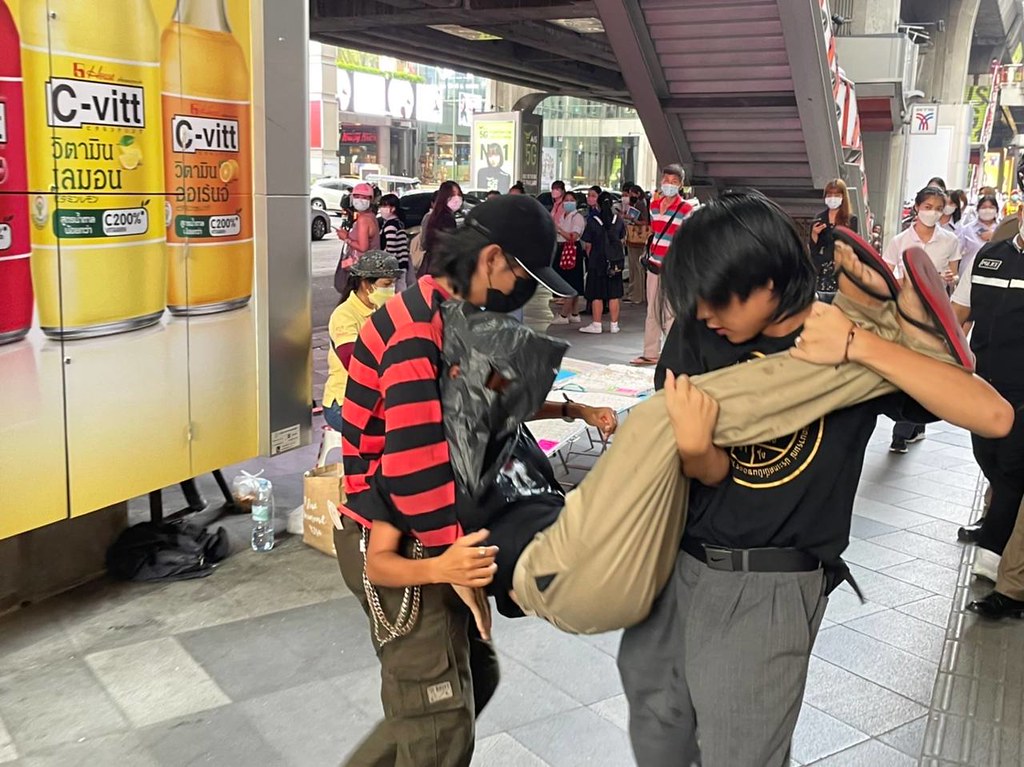 The mock-up abduction before the event conclusion.

Mint, a Thai traditional dancer-turned-activist who participated in the march, said that the performance signified that anyone could become a victim of enforced disappearance. She noted that human rights lawyer Somchai Neelapaijit was abducted in the middle of Bangkok, and added that the fates of most people who disappeared remain unknown.

Mint noted that as they were staging their march, women police officers were deployed in the area, possibly to remove them from the protest location. 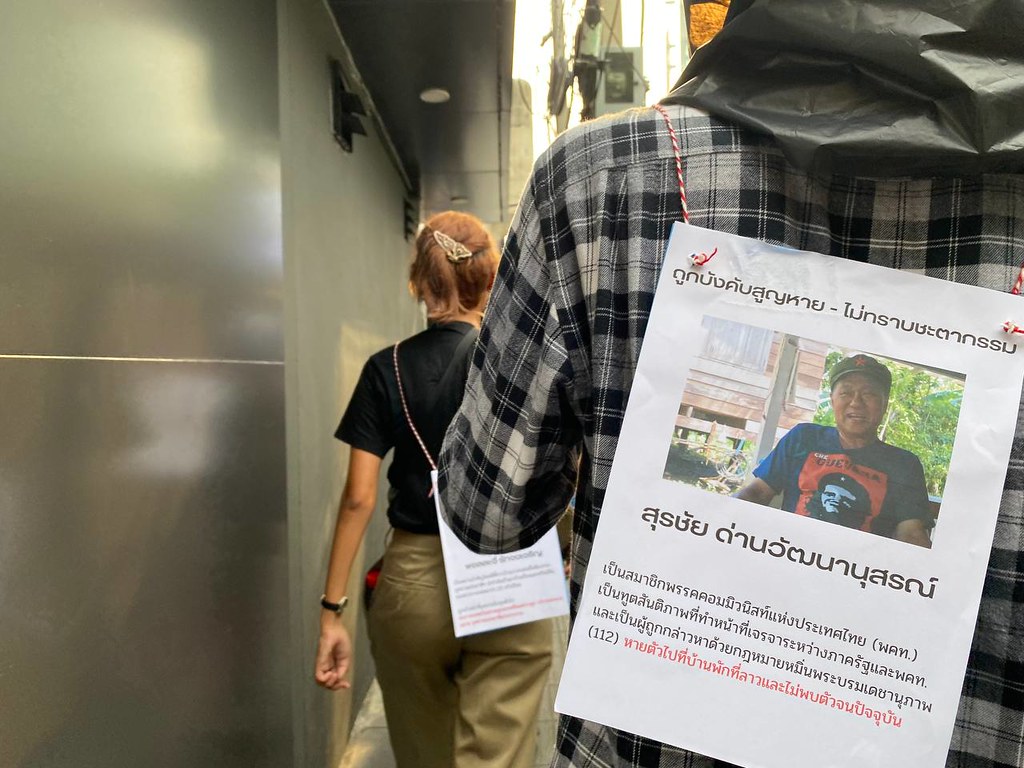 An event participant hangs a photo of Surachai Danwattananusorn, one of the disappeared Thai activists who was reportedly abducted in December 2018 with two affiliates. Two bodies but his were found on Mekong River bank a couple weeks later.

“So, we have organised this event to look back at the twisted things that have happened in this country. They call it democracy but you can be abducted or killed for just expressing your opinion."

Chan (pseudonym), 18, another participant who was on the authorities’ watchlist said he wanted officials to have empathy toward their victims, to “… think of the hearts of family members who have been forced to live with loss.  One day it could be someone close to you. Don’t use the excuse that ‘superiors ordered it’ -  in the future, in your children or grandchildren’s time, it could be your children or grandchildren who get it.”

“Nobody should be disappeared because they think differently.”