The Constitutional Court has accepted a petition asking it to rule whether Prime Minister Gen Prayut Chan-o-cha’s time in office is up due to the 8-year maximum term limit for a Prime Minister imposed by the 2017 Constitution, and suspended him from office until a ruling is made. 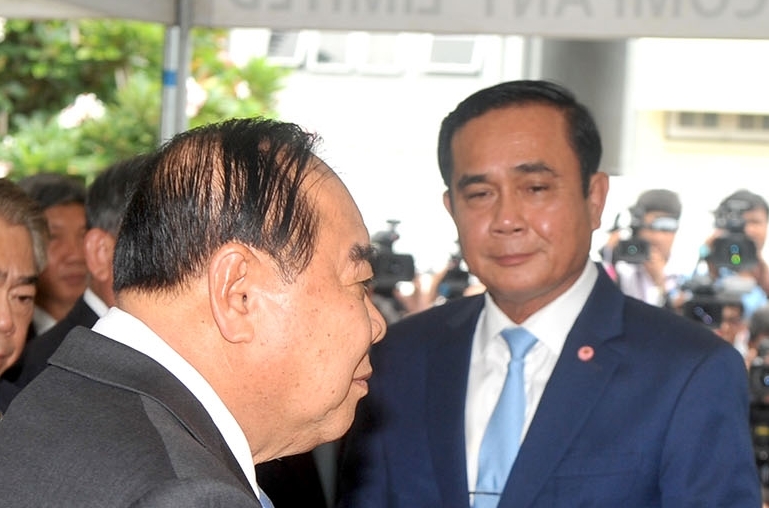 The petition raised 6 points as follows:

Anucha Burapachaisri, Deputy Secretary-General on Political Affairs to the Prime Minister, said following the Court’s decision that Gen Prayut respects the decision to suspend him and will step back from Prime Ministerial duties until a ruling is made, but will continue working normally as Minister of Defense. Meanwhile, Deputy Prime Minister Gen Prawit Wongsuwan will be acting as Prime Minister while Gen Prayut is suspended.

Opposition leader and Pheu Thai MP Dr. Chonlanan Srikaew held a press conference following the Court’s decision. He praised the Court’s decision to suspend Gen Prayut and said that the suspension shows that the Court accepts the questions raised by the opposition. He noted that, as far as opposition parties are concerned, Gen Prayut’s term in office ended on 24 August 2022, and so they consider him no longer Prime Minister, and said that Gen Prayut should resign so that a new Prime Minister can be elected and a new cabinet appointed, which would also lessen the burden on the Court.

Move Forward Party leader and MP Pita Limjaroenrat also held a press conference saying that the Move Forward Party is concerned that Gen Prayut’s suspension will lead to an administrative vacuum, which will mean that several issues facing the country remain unsolved. The party therefore demanded that the Constitutional Court rule on the matter quickly so that parliament can move forward to electing a new Prime Minister. He also noted that returning power to the people by dissolving parliament is also possible.

Move Forward Party MP Rangsiman Rome also said that he does not believe that Gen Prawit will be a better Prime Minister than Gen Prayut, since both played a role in bringing the country to this point. He said that the country must call on the Constitutional Court to issue a ruling, and if it rules that Gen Prayut’s term is over, parliament must elect a new Prime Minister.

“If we elect a new Prime Minister, what we have to do next is to leave it to the new Prime Minister take steps to return power to the people and hold an election, and not to stay in office for the full term, which is not what Thai society wants,” Rangsiman said.