On 17 May, the International Day Against Homophobia, Transphobia, and Biphobia (IDAHOT), activists held a rally for LGBTQ rights and called for marriage equality by rewriting the Constitutional Court’s ruling on the Thai marriage law. 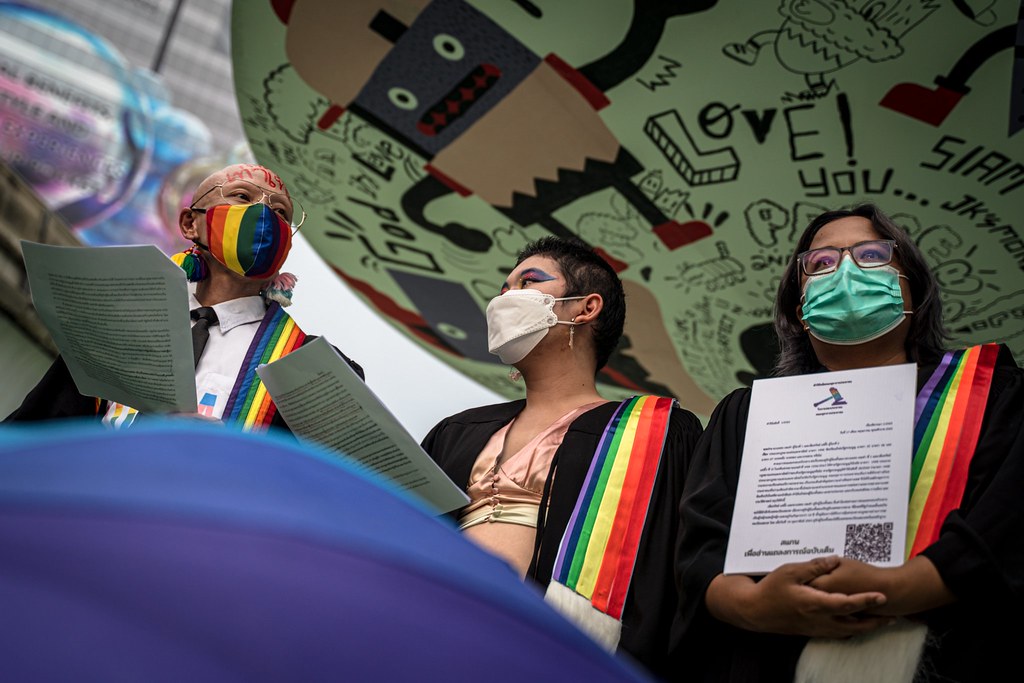 On 17 November 2021, the Thai Constitutional Court ruled that Article 1448 of the Civil and Commercial Code, which states that marriage can only be contracted between a man and a woman, does not violate Section27 of the Constitution, which states that all persons are equal, and equally protected, under the law.

The ruling sparked public outrage, as the full text was found to be archaic, sexist, and homophobic, such as when it defines marriage as “when a man and a woman are willing to live together, to build a husband and wife relationship to reproduce their offspring, under the morals, traditions, religion and the laws of each society” and that it is therefore reserved only for a man and a woman. The ruling also mention that LGBTQ people cannot reproduce and that LGBTQ marriage is against the natural order, and that they cannot form the same “delicate bond” as that of heterosexual families. It also said that legalizing LGBTQ marriage would place a greater “burden” on the government to provide welfare and benefit to LGBTQ couples. Another part of the ruling also compared LGBTQ people to animals with strange behaviour.

On 8 March, International Women’s Day, Thai Lawyers for Human Rights (TLHR) and the activist group Feminist’s Liberation Front Thailand launched the “People’s Judgement” project with a panel discussion on marriage equality, during which panellists said that the Constitutional Court’s ruling shows a lack of understanding and connection with the people, as well as damages gender justice in the country.

Tyrell Haberkorn, Professor of Asian Languages and Cultures at the University of Wisconsin-Madison, said during the discussion that the project aims to provide an opportunity for the public to criticize the Constitutional Court’s ruling in order to imagine a more equal future by rewriting the ruling.

Haberkorn said that the project took inspiration from activists and feminist lawyers in other countries, such as Canada, Australia, New Zealand, Ireland, and the UK, which uses this method to push for changes in the legal system. She noted that these countries are democratic countries where the courts try to be progessive, but the situation in Thailand is the opposite since there is still an attempt to protect conservative ideology.

In Canada, a group of feminist academics, activists, and lawyers formed the Women’s Court of Canada and rewrote a number of rulings made by the Supreme Court of Canada in gender equality-related cases to see what the rulings would have been like if equality as defined under Section 15 of the Canadian Charter of Rights and Freedoms took priority in the decision-making process.

Haberkorn said that she was angry and found that the Constitutional Court’s ruling devalued LGBTQ people’s human dignity. She said that, as an academic who studies human rights and state violence, she has not studied LGBTQ rights even though she identifies as a woman who loves women, and wanted to rewrite the ruling to show the court how it should be done.

Meanwhile, TLHR lawyer Poonsuk Poonsukcharoen, another panellist, said that Thai law has never defined marriage as a union between a man and a woman, but there is stipulation under Article 1448 of the Civil and Commercial Code, which is being challenged on whether it is discriminatory, and she is not sure where the Constitutional Court got its definition of marriage from. She also said that the Constitutional Court said that Thai tradition is different from that of other countries and that a law would only be sustainable if it doesn’t go against the views of the people, and questioned how the judges could say what the public’s opinion is on any matter.

Poonsuk said that the Court only considered the two sexes, male and female, and the differences in how each sex is treated, but today, gender has gone beyond the male-female binary and reflects how the Constitutional Court is still stuck in the old framework. She also noted that the Constitutional Court should not have considered the idea that people would get married in order to benefit from state welfare, even though a marriage without the intention of living together would be annulled under the current law.

The TLHR lawyer said that the People’s Judgement project is an attempt to bring power back to the people. Since there can be no appeal against a Constitutional Court ruling, other courts are not able to comment on it in the way that would have been possible in other cases where appeals can be made to the Appeal Court or the Supreme Court. She said that rewriting the ruling would be a positive criticism of the Constitutional Court in that it would show the court how things should be.

Meanwhile, gender equality activist Chumaporn Tangkliang said during the panel discussion that the public has the right to write a ruling because everyone is human and equal. While judges have law degrees and a job, people in the LGBTQ community have to live with not being allowed to register their marriage, so they have the right to write their own ruling. Doing so would return to them their power and human dignity.

On 17 May, activists gathered on the Pathumwan Skywalk for an IDAHOT rally, during which they presented a rewritten version of the Constitutional Court ruling on marriage law, which was written by activists and members of the public who signed up to participate in the People’s Judgement project, which states that Article 1448 of the Civil and Commercial Code violates Sections 4, 25, 26, and 27 of the Constitution, noting that even though Section 27 of the Constitution states that men and women have equal rights, it does not mean that anyone with a different gender identity or sexual orientation does not have equal rights. The ruling said that not discriminating on the basis of gender includes everyone regardless of their identity or orientation, and a law that is limited to sex as assigned at birth would lead to discrimination against a group of people in the society on the basis of gender, which would disrespect their human dignity.

The ruling stated that building a family is now not limited to a man and a woman, and that sharing one’s life with another person is about the intention to create a sustainable relationship. It stated that the family is held to be a fundamental institution of Thai society, and that the right to establish a family should not be denied to LGBTQ people. It notes that families do not exist solely for procreation, that reproductive technology now exists to assist those who wish to have children, and that the law must protect the rights of all individuals.

“Oppressing people who are different is not good morals, no matter how one defines good morals. Neither sexual nor gender bias should be a factor in deciding who can marry and nor should fears that extending the right to marry will increase the burden on the state or that people will exploit public benefits and impact state security. Equality in this country has never been a gift from the state but is a result of a long struggle,” said the ruling. 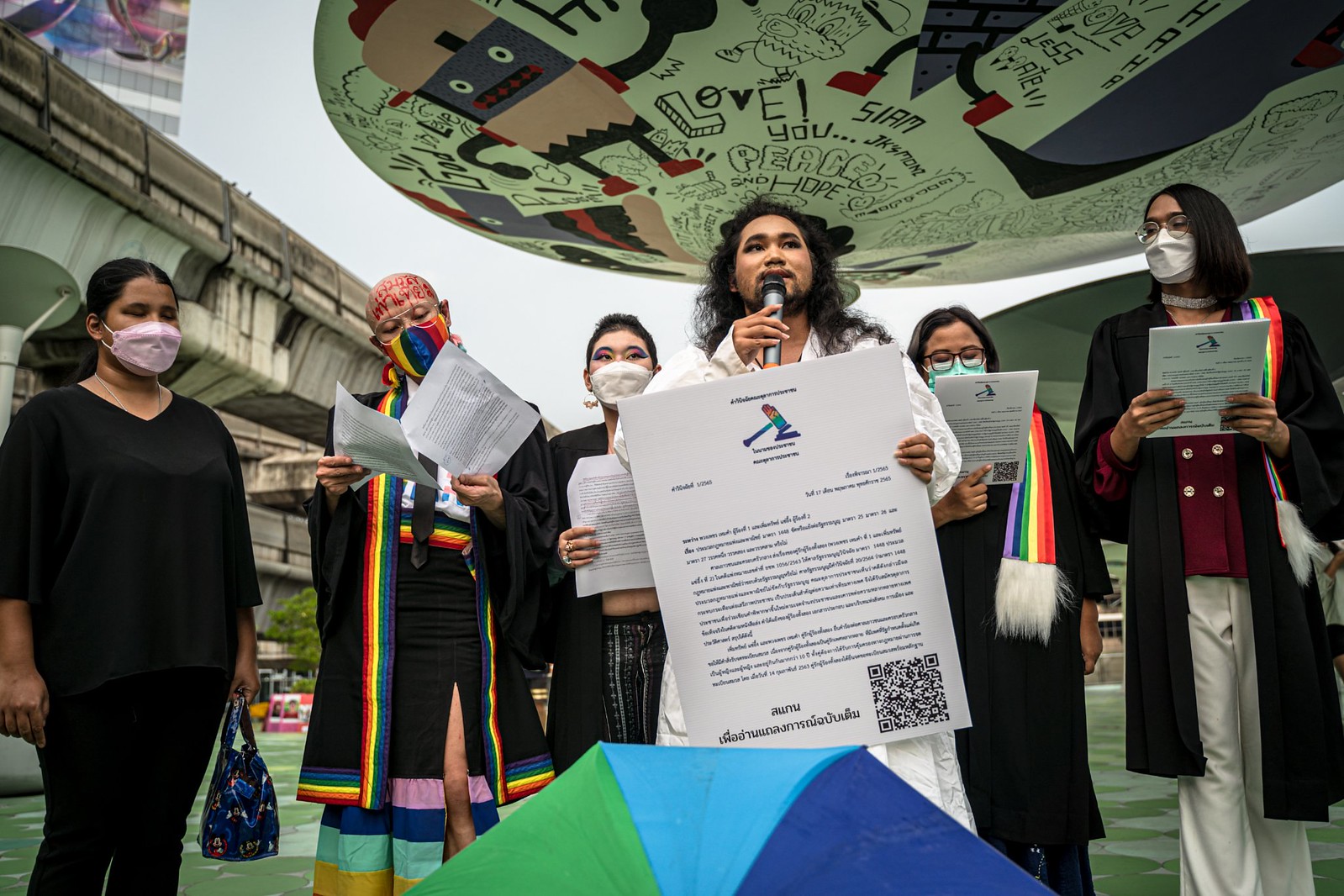 Currently, two bills on marriage for LGBTQ couples are already waiting to go before parliament. One is the Civil Partnership bill proposed by the Ministry of Justice and approved by the Cabinet in June 2020. It has previously been criticized by NGOs and LGBTQ rights activists for not giving LGBTQ couples the same rights as heterosexual couples and for being unclear about whether certain rights are granted. Activists also questioned the need for separate legislation legalising LGBTQ marriages and raised concerns that the bill will deepen the stigma against the LGBTQ community in Thailand.

Another bill is proposes amendments to the sections on marriage and family in the Civil and Commercial Code, or the Marriage Equality bill, proposed by MPs from the Move Forward Party, which will change the terminology used in the law to “spouse” instead of “husband” and “wife,” and “person” instead of “man” and “woman” and raise the age at which a person can legally marry from 17 to 18 years.

The bill went before parliament in February 2022 and was forwarded to the Cabinet for consideration. On 29 March, the Government House website reported the Cabinet voted to reject it and ordered the Ministry of Justice and the Ministry of Social Development and Human Security to develop the Civil Partnership Bill using the results of a study conducted by Sukhothai Thammathirat Open University and to present a revised draft to the Cabinet as soon as possible so that it can be proposed to parliament.

Nevertheless, the Marriage Equality bill can still go before parliament. According to the 2019 Rules of Procedure of the House of Representatives, a bill proposed by an MP or by civil society can be forwarded to the Cabinet for a 60-day consideration period, and must be returned to parliament after the consideration period has lapsed. The House Speaker may also put it on the parliament agenda even though it has not been returned.

Meanwhile, another Marriage Equality Bill is in the process of collecting signatures so that it can be proposed to parliament. On 28 November 2021, during a protest at the Ratchaprasong intersection, the Rainbow Coalition for Marriage Equality, a network of over 40 civil society organizations and activist groups, launched a petition proposing amendments to the Civil and Commercial Code to allow marriage registration between two people of any gender.

The petition proposes to amend Article 1448 of the Civil Commercial Code, which governs marriage, so that marriage registration is allowed between two people of any gender, instead of only between a man and a woman. It also proposed to raise the age at which people can legally marry from 17 to 18 years old.

The petition also proposes to replace the terms “man” and “woman” in every article of the Civil and Commercial Code relating to marriage with “person,” as well as to replace “husband” and “wife” with “spouse” and “father” and “mother” with “parents.”

Within 24 hours of its launch, the petition gained over 150,000 signatures, ten times the number legally required for a bill to be put before parliament. As of 20 May 2022, it has gained over 304,000 signatures.