On 17 May, the Ratchadaphisek Civil Court postponed hearings in the case against the Office of the Prime Minister and the Royal Thai Army (RTA) over compensation for their involvement in Information Operations (IO) targeting people and activists in the Deep South of Thailand where the military are conducting anti-insurgency operations. 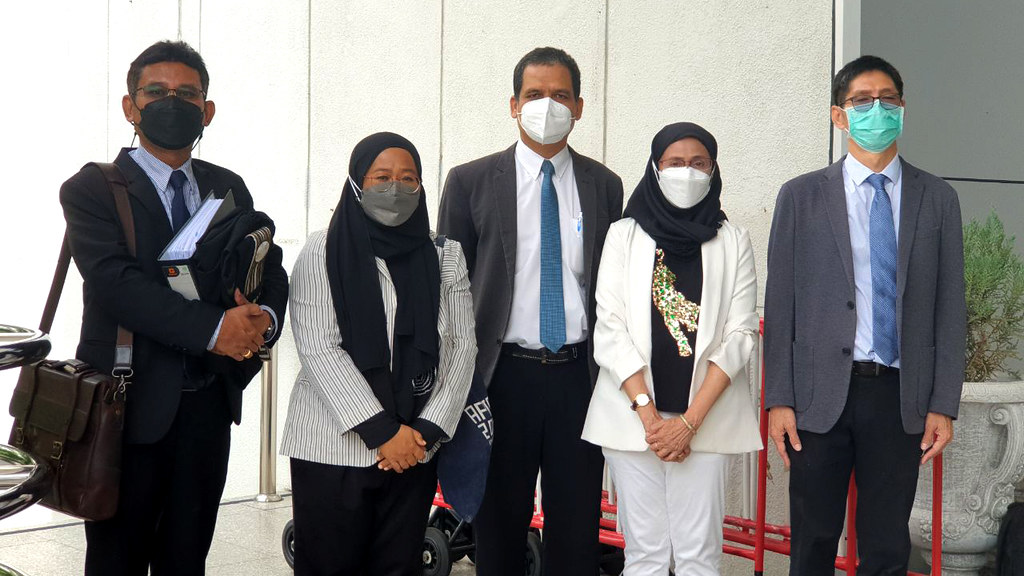 Anchana and Angkhana (Second from the left and right) take a group photo with the lawyer team.

The case was brought by Angkhana Neelapaijit, a former member of the National Human Rights Commission (NHRC) and now an expert in the United Nations Working Group on Enforced or Involuntary Disappearances (WGEID), and Anchana Heemmina, a human rights activist from the Duay Jai group, a rights organisation in the Deep South, who have been the target of defamation by Pulony.blogspot.com, a website that was found to have a connection with the Internal Security Operations Command (ISOC), a quasi-military government agency conducting operations involving civilians.

Angkhana and Anchana filed a lawsuit against the Office of the Prime Minister, the entity that oversees ISOC, and the RTA, saying they were guilty of malfeasance for supporting the publication of defamatory accusations against them via the website.

The two plaintiffs and their team of lawyers presented themselves at the Court for what was scheduled to be the last hearing of witnesses for the plaintiffs, only to be informed that the hearing had been put off, on the grounds that a lawyer for the defendants had fallen ill.

As the trial was supposed to continue with defence witness hearings on 18-19 May, the postponement has affected that schedule. The next hearing is set for 26 August 2022.

Angkhana expressed regret over the postponement because she had prepared well for her testimony, hoping for a quick end to the case. She added that this case was not pursued for the benefit of Anchana and herself, but with the aim of setting a precedent for the protection of human rights defenders from the work of IOs that still persists and repeatedly makes victims of women human rights defenders (WHRDs).

Sanya Chongdeeiad, a member of the legal team, said the team has prepared two witnesses. One is Angkhana, who will address the scope of damage caused by harassment of women human rights defenders working in the Deep South. Another witness is an expert that has been monitoring the website’s attacks on human rights defenders, activists and citizens who rally for human rights protection.

The case stems from evidence revealed during a 2020 parliamentary no-confidence debate in which MP Wiroj Lakkhanaadisorn exposed an Information Operation (IO) to spread disinformation and smear the reputations of WHRDs using the website Pulony.blogspot.com. The alleged aim of the IO was to damage the reputations, dignity and mental health of WHRDs. The case was filed to hold those responsible for the IO accountable.

On 4 November 2020, lawyers representing Angkhana and Anchana, filed the case against the Office of the Prime Minister and the RTA, claiming damages of three million baht and two million baht respectively. The defendants are alleged to be responsible for the dissemination of disinformation on the Pulony.blogspot.com website to smear the two WHRDs.

Twitter cooperated with the Stanford Internet Observatory (SIO) in the investigation and analysis which revealed that 926 accounts with 21,385 tweets linked to the Thai Royal Army supported the government and the Army and targeted opposition parties and their allies, especially the Future Forward Party (FFP) and the Move Forward Party (MFP).

The SIO’s country report “Cheerleading Without Fans: A Low-Impact Domestic Information Operation by the Royal Thai Army” categorized the RTA IO behaviour under 4 headings: RTA Cheerleading, neutralizing criticism during the Korat mass shooting, criticizing the FFP and MFP, and posting content related to Covid-19 including retweeting the PM’s tweets.