17 May 2022 marks the 30th anniversary of “Black May”, a popular uprising in 1992 that ended with a violent military crackdown and the fall of a military-led government. Plans to use the commemoration event to promote reconciliation are drawing more criticism than praise. 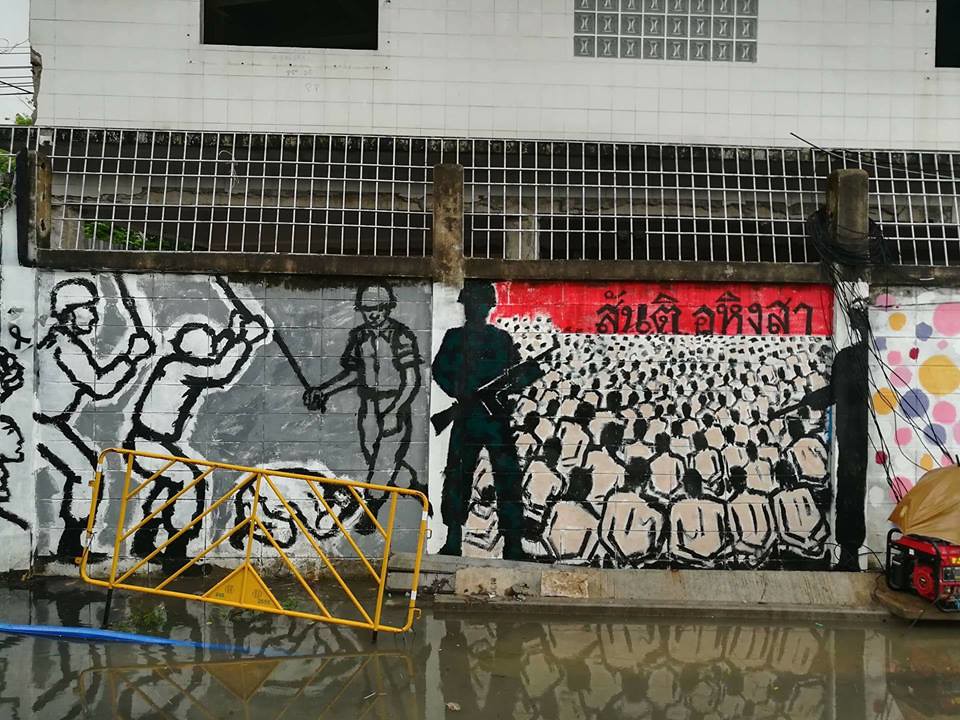 A file photo of graffiti behind the Black May memorial site at Ratchadamnoen Road.

In a statement issued on 5 May, Adul Khieoboriboon, the chair of a committee representing the relatives of individuals killed during the Black May violence, announced plans to invite Gen Pravit Wongsuwan, commander of the Royal Thai Army (RTA), Deputy Prime Minister Abhisit Vejjajiva, a former PM and Democrat Party head, Cholnan Srikaew, leader of the Pheu Thai Party, and a number of other individuals involved in the 1992 event to the commemoration.

According to Adul, the aim is to build upon reconciliation efforts that began five years ago when the committee first started inviting military leaders to the event.

Past commemoration events provided Black May survivors from different political camps with an opportunity to interact. Only recently have military leaders, and Gen Prawit, been invited to participate, however. 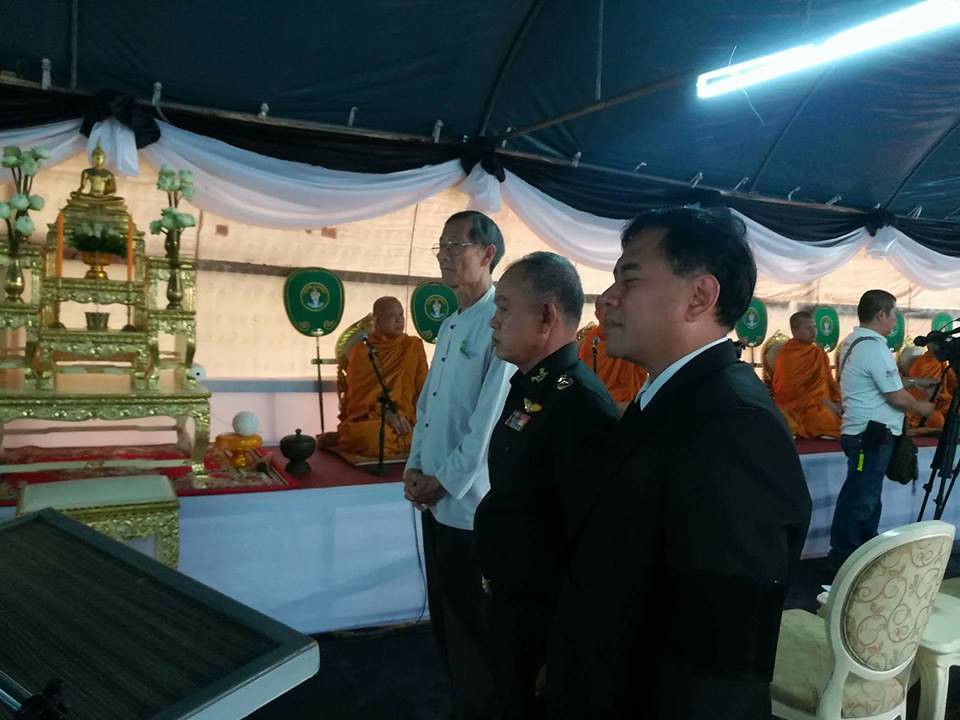 A representative from the Royal Thai Army (in the middle) attends the 25th commemoration event in 2017.

Metha Matkhao, secretary-general of the relatives’ committee, affirmed that organisers have invited figures from all shades of the political spectrum, from government and opposition party members to police and army officers. Chuan Leekpai, a Democrat Party politician and parliament spokesperson, has been asked to chair the commemoration and wreath-laying ceremonies.

Not everyone agrees that reconciliation is warranted. Thirty years ago, people took to the streets to protest against the military dictatorship of Gen Suchinda Kraprayoon. In the crackdown that followed, the official death toll was 52 people. Another 3,500 were arrested, many alleging that they were tortured in custody.

As a result of the violence, Gen Suchinda, and protest leader Maj Chamlong Srimuang were summoned on 20 May to meet with King Rama IX to find a way out of the conflict. Gen Suchinda later resigned on 24 May, paving the way for a return to civilian rule.

The military’s withdrawal from politics makes Black May a rare occurrence in Thailand, an episode comparable to the October 1973 protests which toppled the military government of the day. King Bhumibol’s effort to defuse tensions was also a moment when the king’s popularity reached a new peak.

Some argue that efforts to ‘forgive and forget’ are misplaced, that the commemoration should focus instead on honouring the victims of past political struggles.

Since 8 May, the People’s Network for Democracy (PNP), an ad-hoc gathering of civil society and academic groups, has been encouraging people to boycott the commemoration ceremonies.  The reason cited is that attendees and scheduled speakers include leaders of anti-democratic movements and perpetrators of the deadly 2010 crackdown on red shirt protesters.

A group statement cited the examples of Gen Prawit, who participated in the 2010 crackdown and led the junta that ousted Yingluck Shinnawatra’s elected government in 2014;  Abhisit Vejjajiva, an unelected Prime Minister who oversaw the military crackdown in 2010; Kasit Piromya a former Minister of Foreign Affairs who was a leading figure in the anti-democratic People’s Alliance for Democracy (PAD aka Yellow Shirt, the ultra-right wing pro-royalists), and Piphob Dhongchai, another leader of the PAD and the People’s Democratic Reform Committee (PDR), a movement that set the stage for the 2014 coup.

“Without question, these individuals have effected a roll back of civil and human rights, imposing laws to undermine … democratic movements from 2006 right up to the present. Gen Prawit, in particular, has not only brought about the destruction of Thailand’s democracy but also emerged as a collaborator of the Min Aung Hlaing regime in Myanmar and fostered insecurity throughout much of ASEAN,” stated the statement.

On 9 May, the United Front of Thammasat and Demonstration (UFTD), a student activist group from Thammasat University (TU), posted a statement in which they strongly objected to the invitation of Abhisit, Prawit and others involved in the crackdown of the red shirt protesters.

The statement noted that by inviting people responsible for deaths of pro-democracy protesters, the organisers of the commemoration ceremony were undermining the legacy of the people who took to the streets in the Black May event.

“We denounced the organisers of the commemorative event for distorting the will of the heroes of May 1992.  They lack an understanding of Thai political history and people who seek democracy. We urge those who love democracy and oppose dictatorship to not participate in the commemoration and to protest against the organising committee,” the statement declared.

Another open statement has been circulating on social media this past week. A petition, it also denounces the event committee for inviting Prawit and Abhisit to attend the commemoration ceremony, citing reasons similar to those listed by the UFTD. As of 9 May, the statement had received 229 signatures.

In 2010, the Abhisit Vejjajiva government dispersed protesters from the United Front for Democracy Against Dictatorship (UDD), violently ending a demonstration which had been going on for 3 months to secure the dissolution of parliament and a new election. The crackdown, which included the use of live ammunition, war weapons and tanks, caused 94 death - 84 civilians and 10 officials.

As of 2022, neither the military nor any officers responsible for the killing and the crackdown operations have been brought to justice.

A collection of blind alleys: murder cases from the 2010 protest crackdown going nowhere after 10 years

In addition to the Thai circle, Thinzar Shunlei Yi, an activist from Myanmar has also withdrawn his participation as a speaker in the commemoration event, according to his post on Facebook.

“With all due respects to the activists, students, people killed by the Thai Army #BlackMay on May 17, 1992, I refuse to stand along with current Thai Deputy Prime Minister & former Military General Pravit,” stated in the post.