Plans for the upcoming Southeast Asia Games (SEA Games), scheduled to be held in Vietnam on 12-23 May after 4 months of delays, offer insight into how Southeast Asian nations will find their way back to normal after years of struggling with the Covid-19 pandemic. 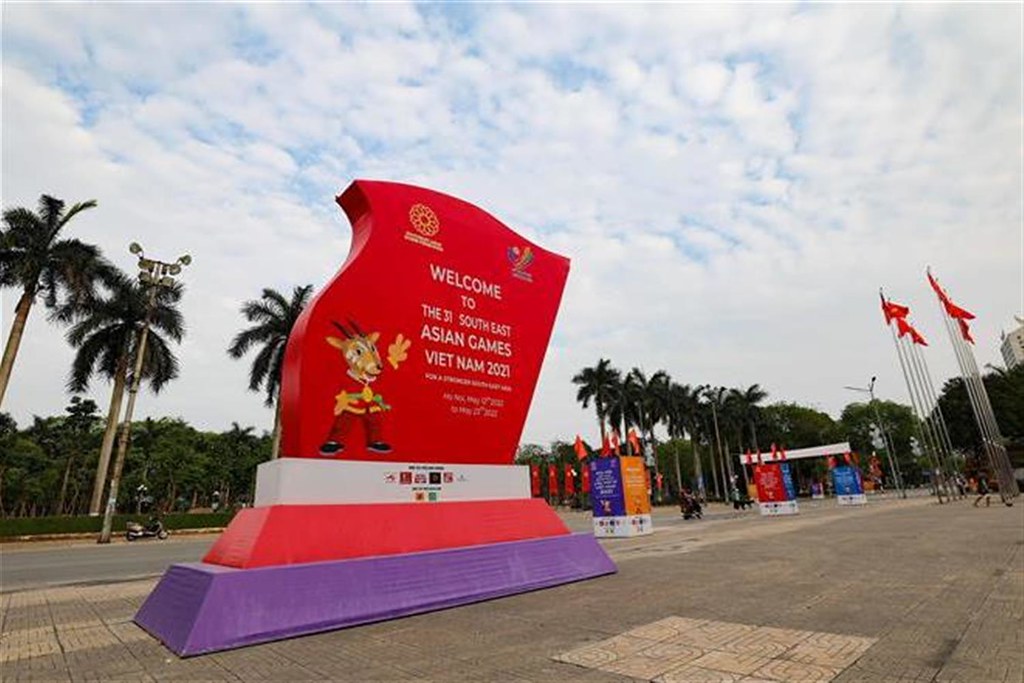 A decoration for SEA Games 31 in Vietnam (Photo: VNA via www.seagames2021.com)

This will be the second time that Hanoi has hosted the SEA Games, a biennial sporting event organised by the Southeast Asian Games Federation on behalf of participants from the 10 member states of the Association of Southeast Asian Nations (ASEAN) and Timor-leste.

The event, which will include 40 sport competitions staged in Hanoi and 12 other venues, is expected to draw some 10,000 participants and 2,000 reporters, a gathering the likes of which has seldom been seen in Southeast Asia since Sars-Cov2 made its first appearance here in early 2020.

The crowds may exceed the expectations.  The opening ceremony will be held on 12 May at the Mỹ Đình National Stadium, which has a seating capacity of 40,192. In anticipation of a large audience, the men's football finals are slated to be held in a venue that can seat tens of thousands.

Under the theme ”For a Stronger Southeast Asia”, Vietnamese planners have been preparing facilities, supplies, and infrastructure with an eye on public health.  The goal is not just to control infection but to serve as a regional vanguard demonstrating how Southeast Asian peoples can safely coexist with Covid-19.

Measuring up to public health needs

To reduce the risk of infection, Vietnam’s Ministry of Health (MoH) has published a set of guidelines, instructing districts hosting events to prepare additional test kits and medical staff. Area hospitals and hotels have also been made ready to cope with infected participants.

Take Hanoi for, an example. The city’s Health Department has prepared 42 medical teams,  half from district medical centres and the other half from local hospitals. Some 5-10 beds in every hospital have been set aside for Covid-19 patients.  Spaces have also been designated in 35 other medical facilities.

Public health measures during the games will be enforced without exception. Participants will be expected to show negative RT-PCR test results 72 hours before their arrival and negative rapid test results 24 hours before their respective competitions. Those infected will not be allowed to compete. Patient symptoms will be used to determine treatment - self-isolation or hospitalization.

Spectator attendance at ceremonies and events will be limited.  When not competing, athletes will be required to wear masks - at awards ceremonies, at press conferences and when giving interviews.

These measures will be imposed, despite the country’s recent lifting of mandatory health declarations for overseas visitors and despite the fact that better than 80 percent of all Vietnamese are fully vaccinated.  Clearly, the government is taking a prudent approach to controlling the spread of a virus responsible for 10.7 million infections, the highest among Southeast Asia nations, and some 43,000 deaths, second highest in the region after Indonesia.

Living with the virus?

Looked at in another way, the proposed health measures offer a glimpse of what Southeast Asian countries will be doing in the near term to facilitate the return of human mobility and economic flows while living under the continued threat of Covid-19.

Measures to prevent deaths and infections have come at a great economic cost. Countrywide lockdowns, business closures, and border controls have caused Vietnam, which saw its per capita GDP better than treble between 2002 and 2021, to experience far slower growth, a mere 2.58 percent in 2021.  This was still better than many countries in the world; only two countries in ASEAN (as of 2nd Q of 2020) maintained GDP growth during the pandemic.

With its population now mostly vaccinated, Vietnam is looking forward to a resurgence and hoping that the 31st SEA Games will spotlight its performance - in event management and in other sectors from retailing and tourism to the provision of services.

In addition to sporting events, the 31st SEA Games official website is promoting tourist spots, encouraging foreign visitors to spend time in the country, and creating opportunities for local businesses to gain thousands of new customers.  The hope is that businesses linked to event venues, particularly service sector firms, will be able to profit and make a good impression on visitors.

If everything goes according to plan - if local businesses benefit, tourist attractions fill up and the Covid infection rate remains low - other Southeast Asian countries will probably follow suit and open up as well. The converse is also true, however.

After a lengthy period of imposing disease control measures at the expense of economic growth and social interaction, Vietnam has a chance to set a good example of how a country can move beyond the pandemic, connecting people once again with tourism and sportsmanship.

With regard to the games, I personally wish that the competition contributes to a regional harmony and pride that transcends nationalism, showing the world the resilience of Southeast Asia.

As the spotlight shines on Vietnam, we must also remember the many who have died over the past few years - not just from Covid and ill-conceived state health policies but also from violent political conflicts in Thailand, Myanmar, and elsewhere in the region. Such matters will probably not be mentioned during the Games. Still, understanding the hardships experienced by people in the region can help to pave the way for meaningful regionalism, one where inclusiveness is valued as much as national security.

In this 31st SEA Games, let us remember the difficulties we have faced over the past 2 years, keeping those who have passed away from the pandemic and political conflicts in our memories. Let us also commit ourselves anew to building a more inclusive ASEAN in the future.