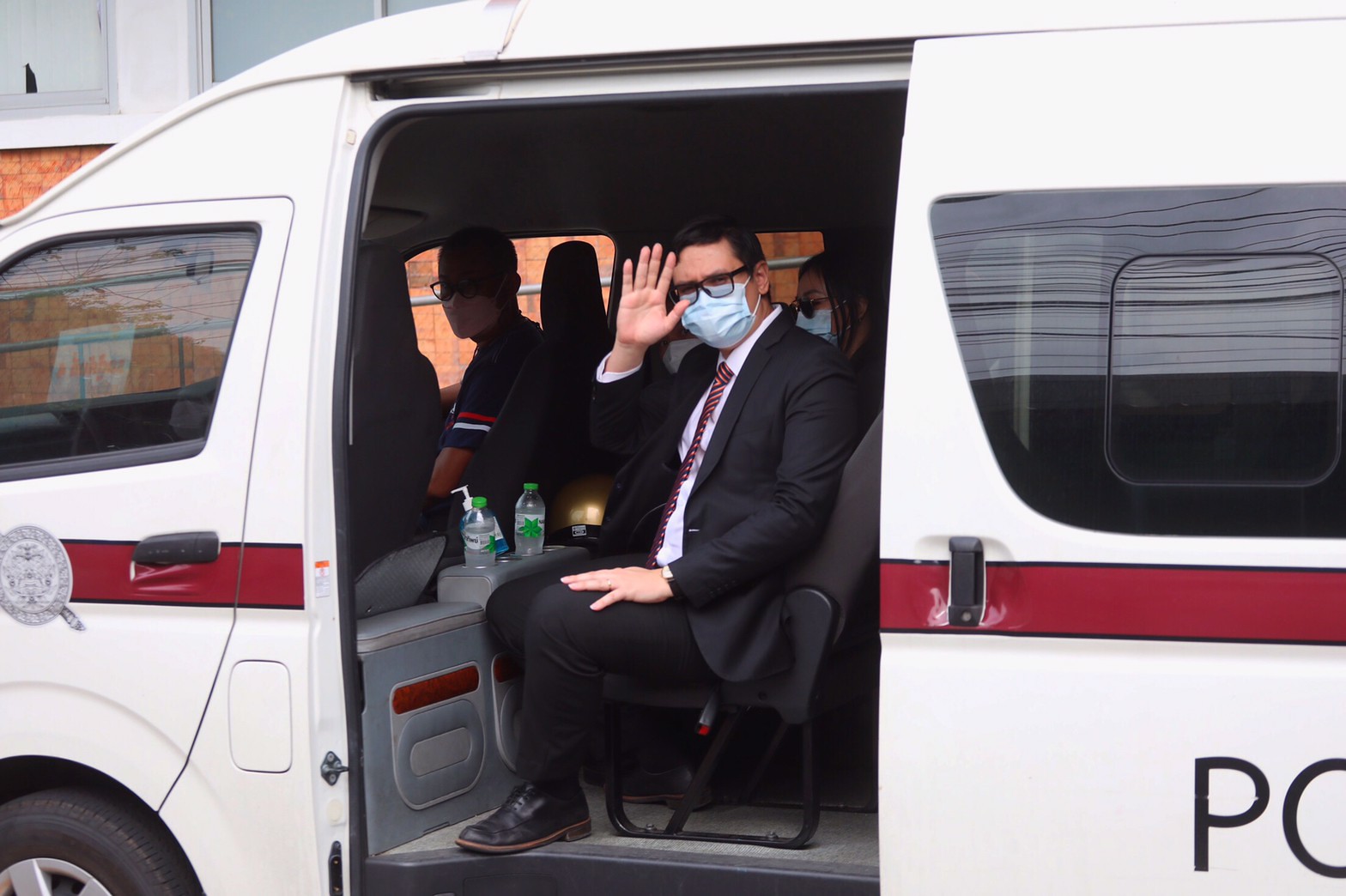 Rangsiman in a police van.

On 18 March, Rangsiman reported to the Bang Khun Non police station to face charges. MFP leader Pita Limjaroenrat, party-list MP Amornrat Chokpamitkul and a number of other parliamentarians accompanied him to show support.

The case originated from a statement made by Rangsiman outside of a no-confidence debate in parliament in 2020. He accused Gen Prawit of using the foundation as a venue to negotiate business deals between high-ranking military officers, business oligarchs and politicians. Due to the lengthy speeches of Saranwut Saranket, the then Pheu Thai Party MP, he did not have enough time on the floor of parliament to finish his remarks, which were made without the immunity provided to parliamentary debate.

According to Rangsiman, he has been threatened with charges every time he raises a motion in parliament about Gen Prawit. He was summoned twice before, on 23 February and March 11, but this time his call for postponement was rejected by the investigator. He suspects that the arrest warrant stems from his recent speech about role of behind-the-scenes influences which impeded a police investigation into the trafficking of Rohingya boat people in 2015.

He contends that charges were filed in order to remove him from parliament. He also asserts that the arrest warrant was technically illegal as it could only be issued for crime stipulating a jail sentence longer than three years and the suspect was a flight risk, neither of which applied in this instance.

“A summons to come and talk was issued on 11 March. I explained that I could not go on that day and asked for a new appointment … but ultimately … the investigator did not allow it, so an arrest warrant was issued”, said Rangsiman.

The activist turned MP said that he is ready to fight injustice from inside or outside of prison. He further asserted that he, and the MFP, will stand and fight the distorted judicial system that is now being used against him.

Noting Rangsiman’s statement on the legal requirements for issuing a warrant, Pita said that the case was abnormally hastened. He added that MFP MPs will continue to stand side-by-side with the people to scrutinise the government.

After turning himself in, Rangsiman was taken to the Provincial Prosecutor’s Office at Taling Chan. Following his meeting with the prosecutor, Rangsiman reported that the prosecutor deemed the police investigation report incomplete and refused to accept it.  He was not immediately detained but the police plan to summon him again for further investigation on 31 March.

In February 2020, Rangsiman alleged that Gen Prawit was using the foundation as a vehicle for hiding political ‘donations’ from private firms.  As evidence, he cited a 1 million-baht donation made to the foundation by Datang Overseas Investment Limited, a company involved in a Mekong river dam project, and the payment made by the Provincial Electricity Authority, where Patikhom Wongsuwan, Gen Prawit’s cousin, has been serving as committee member since 2018.a