7 out of 9 activists who pleaded by the police for temporary detention for surveying public perceptions of royal motorcades have been released on bail. 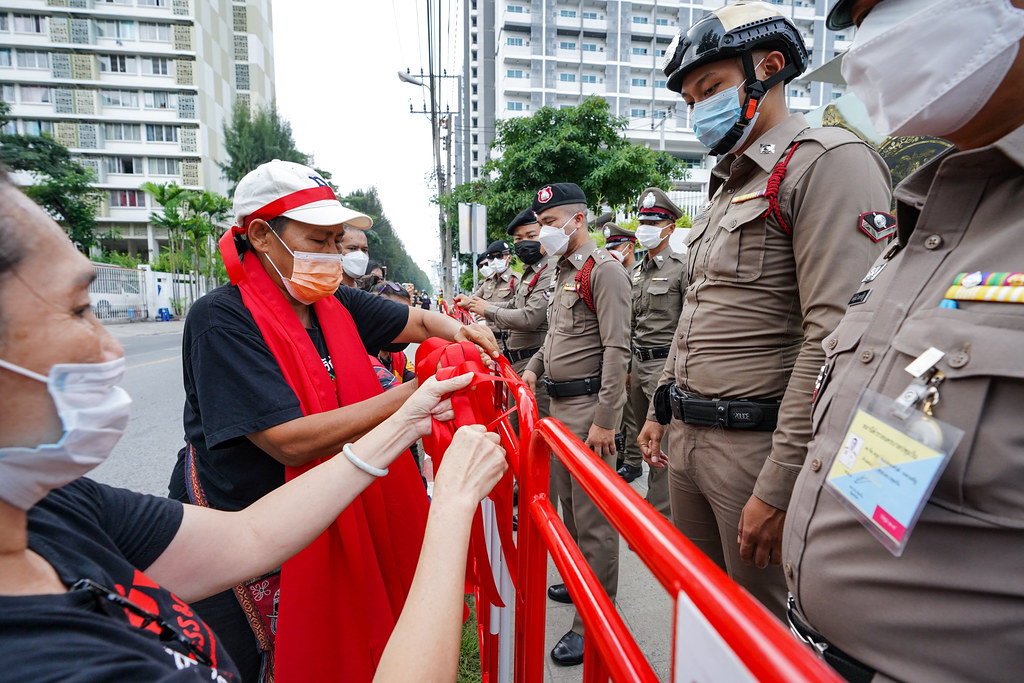 Activists supporters tie red ribbons to the fence set up by Pathumwan police station as a sign of support. (Photo: Ginger Cat)

After conducting a poll that posed the question “Do you think royal motorcades cause problems?,” on 8 February, 9 individuals face charges of royal defamation, sedition and resisting arrest by Pathumwan police station.

Thai Lawyers for Human Rights (TLHR) reports that the South Bangkok Criminal Court granted 5 of the activists bail on 10 March.  Baipor (nickname) and four members of the Thaluwang (Through the palace) Group were released after each posted a Baht 200,000 surety.

Bail conditions stipulate that they must refrain from: engaging in any further activities that damage the monarchy; inviting, inciting or convincing people via social media to participate in protests or activities that cause public disorder; and leaving the country without the Court’s authorisation. All five have also been ordered to wear tracking devices.

According to TLHR a sixth activist, a fourteen-year-old, was granted bail by the Central Juvenile and Family Court with similar bail conditions and a security of 20,000 baht.

Another young activist, Tantawan Tuatulanon, came to the police station to hear charges and released on bail earlier. The charge hearings for two others have been postponed.

Surety money was provided by the Ratsadon Prasong Fund, a crowd-funded charity that provides bail support for pro-democracy protesters and political detainees.

The charges stem from an activity staged at Siam Paragon Shopping Mall on 8 February.  The activists walked inside and outside the mall carrying a poster that posed the question “Do you think royal motorcades cause problems?” Survey participants were given stickers to cast their votes. 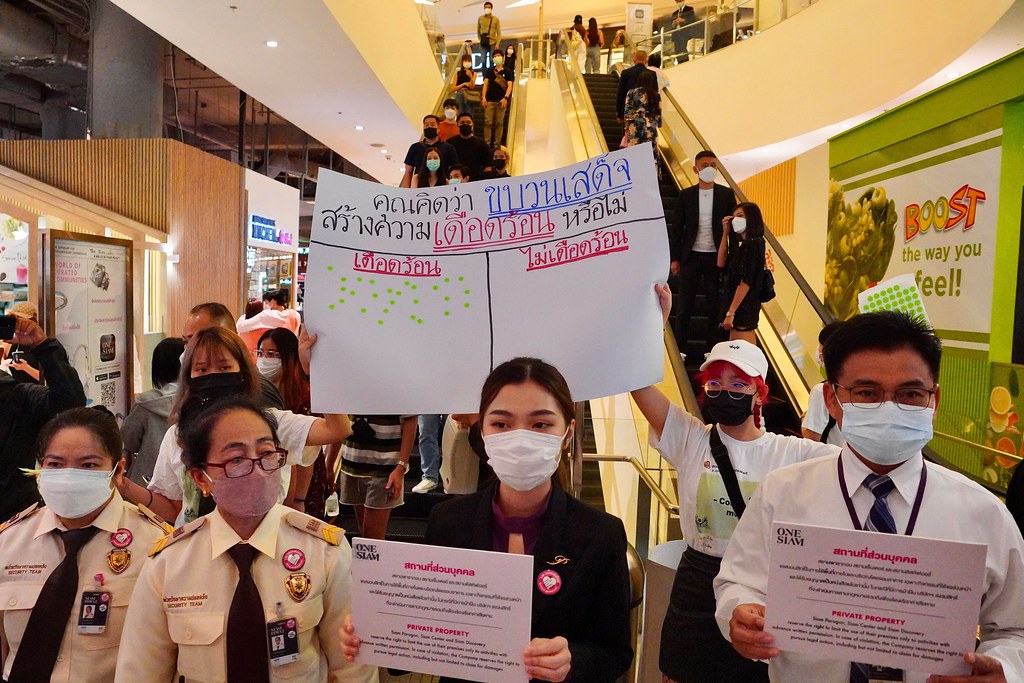 Mall security blocking the activists standing in front of the escalator at Siam Paragon shopping mall on 8 February.

After leaving the mall, the activists walked to nearby Sa Pathum Palace, the residence of the king’s sister, Princess Sirindhorn.  They were planning to deliver their poll results to the princess but were blocked by police officers near the palace entrance. Plainclothes officers grabbed one of the activists from behind and ripped the poster out of her hands.

In pictures of the incident, Tantawan and Baipor can be seen holding the poster. The details of the charges they and the others face have yet to be formally declared.

Section 112 of the Criminal Code, also known as lese majeste law, criminalises acts defaming, insulting or expressing hostilities toward the King, the Queen, the Heir apparent or the Regent. Technically, the law does not extend protection to Princess Sirindhorn but much depends on the court’s interpretation.

This is not the first time that activists have turned their attention to royal motorcades and processions. In the latter months of 2021, the heavily-guarded events were targeted for protests by monarchy reform activists, giving rise to confrontations with the police.

Even before this, Thai netizens were expressing frustration over road closures caused by passing royal motorcades. In October 2019, the hashtag #ขบวนเสด็จ or ‘Royal Motorcade’ trended on Twitter after a procession caused an ambulance-halting traffic jam near Victory Monument in Bangkok during the evening rush hour. The hashtag appeared again in January 2020, with many tweets expressing how motorcade disrupted daily routines.