On 23 December, the ‘Save Na Bon’ group’, 15 villagers from the Na Bon District in Nakhon Si Thammarat who began a hunger strike in front of Government House to end the construction of 2 biomass power plants in their community, announced new developments in their negotiations with a ‘policy body’ about the project . 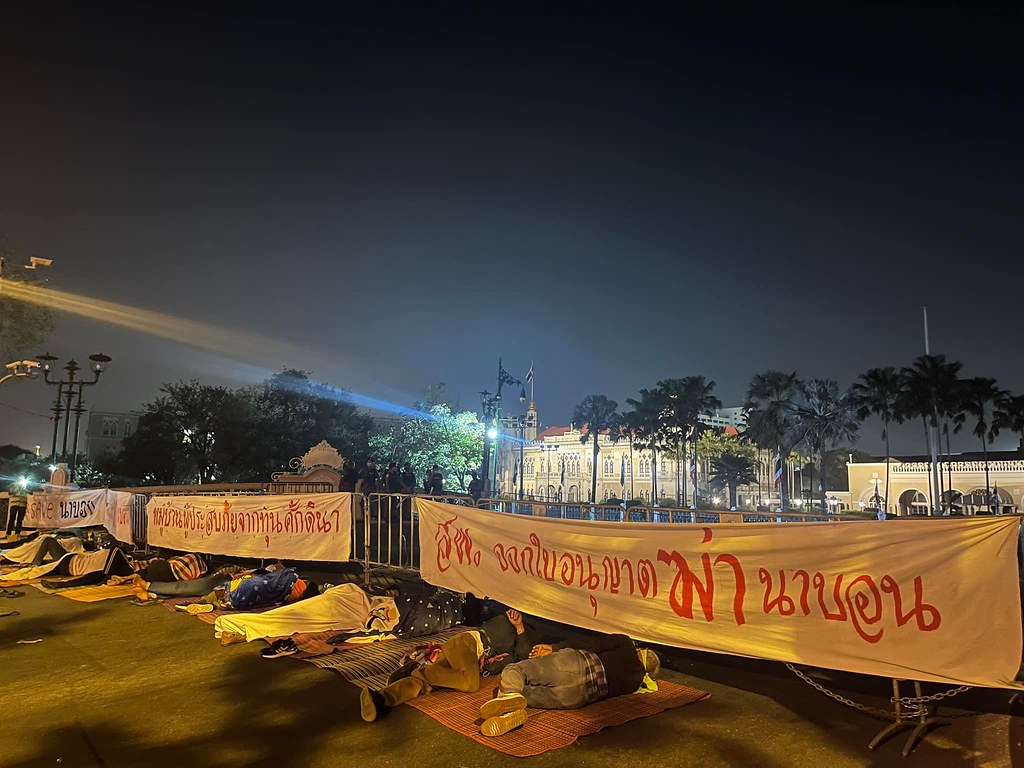 Protesters from Na Bon sleep at the front of the Government House. (File photo)

According to the group, the policy body has agreed to temporarily halt construction in order to conduct a Strategic Environmental Assessment (SEA). This will be undertaken by a committee comprised of representatives from the Ministry of Natural Resources and Environment, the Office of the Prime Minister, and the Office of Natural Resources and Environmental Policy and Planning (ONEP) as well as villagers and academics.

The development is a step forward. On 22 December, Rieng Seekaew , the group’s advisor, announced that the Energy Regulatory Commission (ERC) and the Office of Natural Resources and Environmental Policy and Planning (ONEP) had earlier rejected a proposal to review power plant locations and provide compensation for the 13 families affected by the construction. In response, the group marched to the cabinet to set up a protest camp and the next morning, declared a hunger strike.

Group members are concerned that the power plants will have a severe impact on their communities and surrounding environment. They also allege that the company which acquired land for the site misled villagers by telling them that it would be used to build a market.

After the announcement, the group moved from Government House to the nearby Prince of Chumphon Shrine, to await formal confirmation of the negotiation agreement. They expect to receive it on 24 December.

As of 24 December 11.30, there was still no reports of the formal agreement being handed out.

The power plants are the projects of the Absolute Clean Energy Company Limited (ACE), a Thai electric power distributor that lists Pol Gen Wirachai Songmetta, a deputy commander of the Royal Thai Police, as its largest shareholder (22.43%), as of 23 December.

This is not the first time the group has staged a demonstration in Bangkok.  In July 2021, they held a protest in front of the Siam Commercial Bank (SCB) headquarters. SCB is also one of ACE’s shareholders.