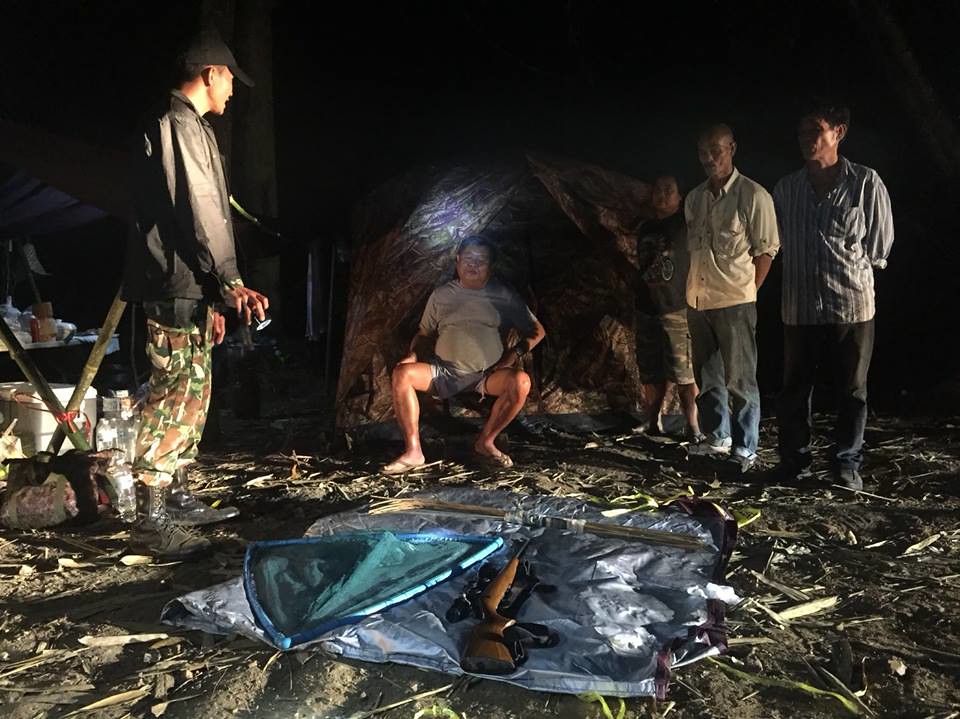 Premchai Karnasuta (seated) when he was arrested at his forest camp

His driver Yong Dodkrua was sentenced to 3 years and 5 months in prison, while hunter Thanee Thummat got 3 years and 9 months. The Court also ordered all three defendants to pay compensation of 2 million baht to the Department of National Parks, Wildlife, and Plant Conservation (DNP), with an interest rate of 7.5% per year.

Premchai, Yong, Thanee, and Nathee Riamsaen, who was their cook, were arrested by officials from the Thung Yai Naresuan Wildlife Sanctuary at their camp in February 2018. Carcasses of a black leopard, a barking deer, and a Kalij pheasant were also found at their camp.

They were later charged with carrying firearms in public without a license, poaching in a wildlife sanctuary, poaching protected animals, and illegal possession of carcasses of protected species.

On 19 March 2019, the Court of First Instance sentenced Premchai to 16 months in prison, Yong to 13 months, and Thanee to 2 years and 17 months. Meanwhile, Nathee was sentenced to 4 months in prison, but her sentence was suspended. She also received a fine of 10,000 baht. They also had to pay compensation of 2 million baht to the DNP.

The four defendants filed an appeal. The Appeal Court then ruled to increase their sentence. Premchai was sentenced to 2 years and 14 months in prison, Yong to 2 years and 9 months, and Thanee to 2 years and 21 months. Nathee received a prison sentence of 1 years and 8 months and a fine of 40,000 baht, but her sentence was suspended for 2 years.

Only Premchai, Yong, and Thanee appealed to the Supreme Court, whose decision to uphold the Appeal Court’s ruling brings an end to a long-running case which has captured public interest for the past 4 years and sparked public anger over the Thai elite’s perceived impunity and unfairness in the justice system.