Home » Women workers, trade unions and grassroots organisations call for safety of women in all workplaces

Women workers, trade unions and grassroots organisations call for safety of women in all workplaces

Feminists, women workers and grassroots women from Asia and the Pacific gathered together, albeit virtually, to kick off the commemoration of 16 Days of Activism and International Day for the Elimination of Violence against Women through the regional online protest, “Ratify C190 - End All Forms of Violence at All Workplaces”. 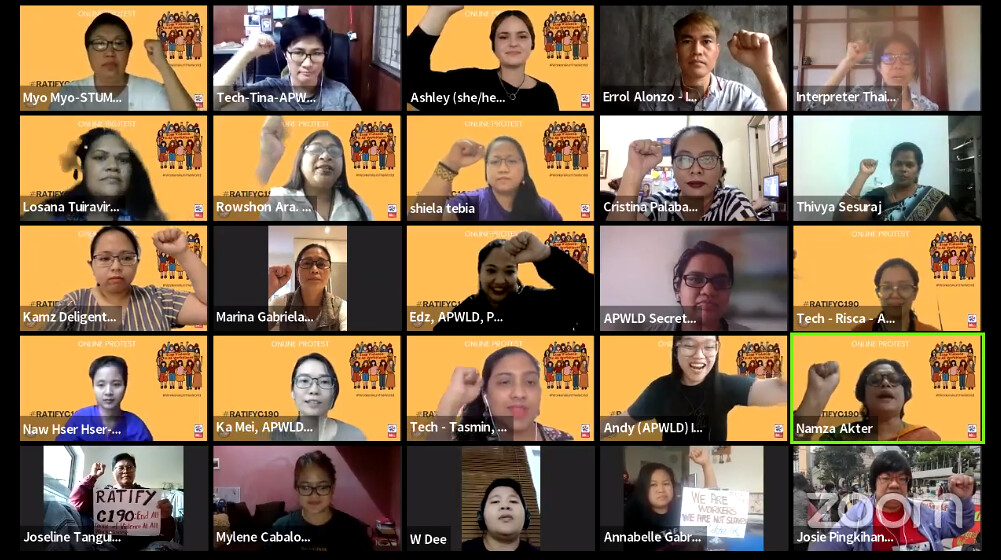 The International Labour Organisation (ILO) Convention 190, or C190, and its accompanying Recommendation No 206 (R206) have been pushed by women workers and its allies as a pathway to end violence and harassment in all workplaces.

To date, only nine countries have ratified C190 worldwide. In Asia and the Pacific, only Fiji has ratified the Convention. Organisations of women workers and grassroots women, however, commit to continue urging their governments to ratify C190 until all women are safe and protected in all workplaces.

“Preventing gender-based violence is essential to ensuring the health, safety and dignity of women workers. It is also a precursor to freedom of association and collective bargaining in industries dominated by women workers. These in turn, are foundational to achieving living wages - a decade-long mandate of the Asia Floor Wage Alliance,” Abiramy explained.

Shiela Tebia-Bonifacio of Asian Migrants Coordinating Body International Migrants Alliance (AMCB - IMA Hong Kong and Macau) also pointed out that C190 will be critically helpful for migrant women who have long been struggling with dirty, dangerous and demeaning jobs abroad without the protection from either the sending or receiving countries.

“In cases of migrant women especially those who engage in domestic work and other low wage jobs, protection, support and government accountability are either lacking or very little. Migrant women are left to fend for themselves, which has become extremely difficult during the pandemic,” Sheila noted.

The ratification of C-190, according to workers, could also help in exercising women’s right to freedom of association and protect women labour rights and human rights defenders from attacks and threats. Stories of women workers noted that union-busting has become a common practice among companies to prevent women workers from organising and empowering themselves to assert their human rights.

Daw Myo Myo Aye of Solidarity Trade Union of Myanmar (STUM) in Burma/Myanmar shared how the authorities violated women’s human rights when a series of arrests happened earlier this year.

“When I was arrested, I was still in my workplace. The regime’s armed forces came into an office compound where a project under the UN is operating and arrested a woman. When I requested to change my clothes, the policemen were standing in front of the room. Is this violence or not?” Daw Myo Myo recalled.

Daw Myo Myo further noted that women are often subjected to threats, torture and various forms of harassment, and that women leaders of unions are targeted. Worse, the government uses family attachments as a threat to weaken women’s collective power.

“Women were arrested when they assert their rights as citizens in political events. In such arrests, women were beaten by the regime’s male uniformed personnel. Sometimes, when a warrant has been issued against the father, the daughter or the spouse will be arrested as hostages and will be tortured to force the father to surrender. The arrests of infants and children, pregnant and elderly as hostages only reflect the brutality and lack of regard for women’s lives of these regime leaders,” she added.

APWLD Deputy Regional Coordinator Wardarina emphasised that gender-based violence and the systemic oppression that women are experiencing in workplaces are deeply rooted in an extractive and exploitive model of capitalism, and that the only way for women to break free from the cycle of oppression and violence is by challenging and dismantling the system together.

“Fighting to end gender based violence for all women in all workplaces is at the center of dismantling the oppressive system of capitalism, fundamentalisms, militarism and patriarchy. And only with cross-movements, struggle, actions and solidarity can we really achieve it. Today we make our resolution to continue that struggle collectively until we achieve our win in ending all forms of gender-based violence and harassment against women in all their diversities in workplaces, and everywhere,” Wardarina shared.