Friends and family of activist in exile Siam Theerawut, who went missing 2 years ago, met at his family home in Samut Sakhon on Saturday (31 October) for a gathering on his 36th birthday, while his fate remains unknown. 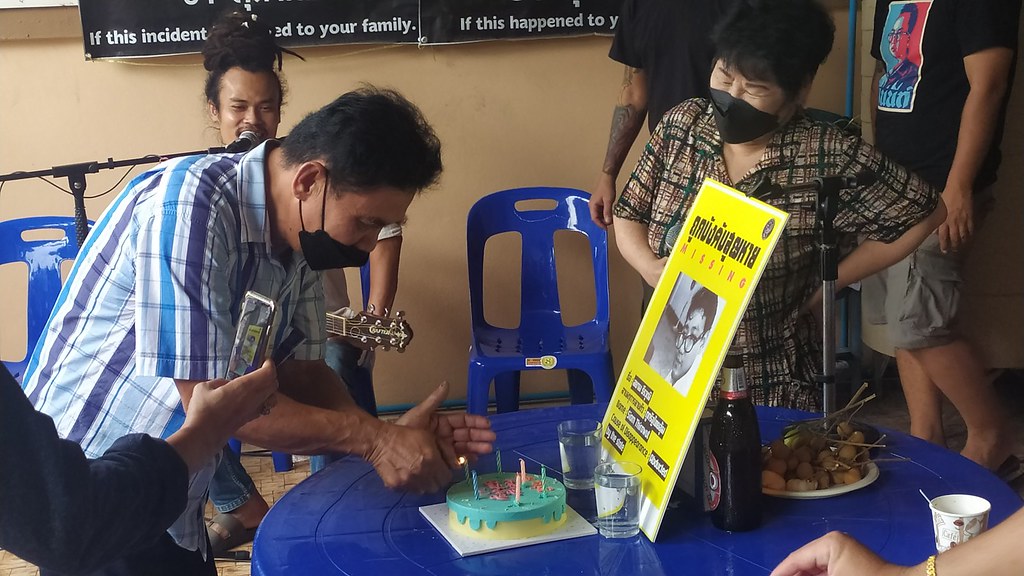 They held a small merit-making ceremony, and a birthday gathering for Siam. There were also reports that, on 29 October, 2 days before the event, 2 men who claimed to be police officers came to the house to ask about the event.

Siam was a member of the Prakaifai theatre group and was involved in “The Wolf Bride.” Many of those involved in staging the play were charged with royal defamation under Section 112 of the Thai Criminal Code. Pornthip Mankhong and Patiwat Saraiyaem, two other performers on the show, were arrested and spent two years in prison.

In 2018, Siam was accused of being a leading member of the Thai Federation and was charged with royal defamation. He fled the country after the 2014 military coup when all royal defamation cases were revived.

Siam went missing in May 2019, after he was reportedly arrested in Vietnam and extradited to Bangkok along with 2 other Thai activists in exile, Chucheep “Uncle Sanam Luang” Chiwasut and Kritsana Tubthai. They have not been heard from since.

In June 2021, Kanya and Saranya Theerawut, Siam’s mother and sister, went to the Department of Special Investigation (DSI), along with Sitanun Satsaksit, sister of missing activist in exile Wanchalearm Satsaksit, and their legal assistance team from Thai Lawyers for Human Rights (TLHR) and the Cross Cultural Foundation (CrCF) to ask for updates on the investigation into the two activists’ disappearances.

Saranya said that there were no updates and that, while the DSI has asked the family for basic information about Siam’s disappearance, there has not been much progress in the investigation at all. As of October 2021, Siam’s whereabouts remain unknown.