On 31 October, a protest was held by the Ratsadon group at Bangkok’s Ratchaprasong Intersection to demand that the royal defamation law be abolished and those held for violating it be freed. 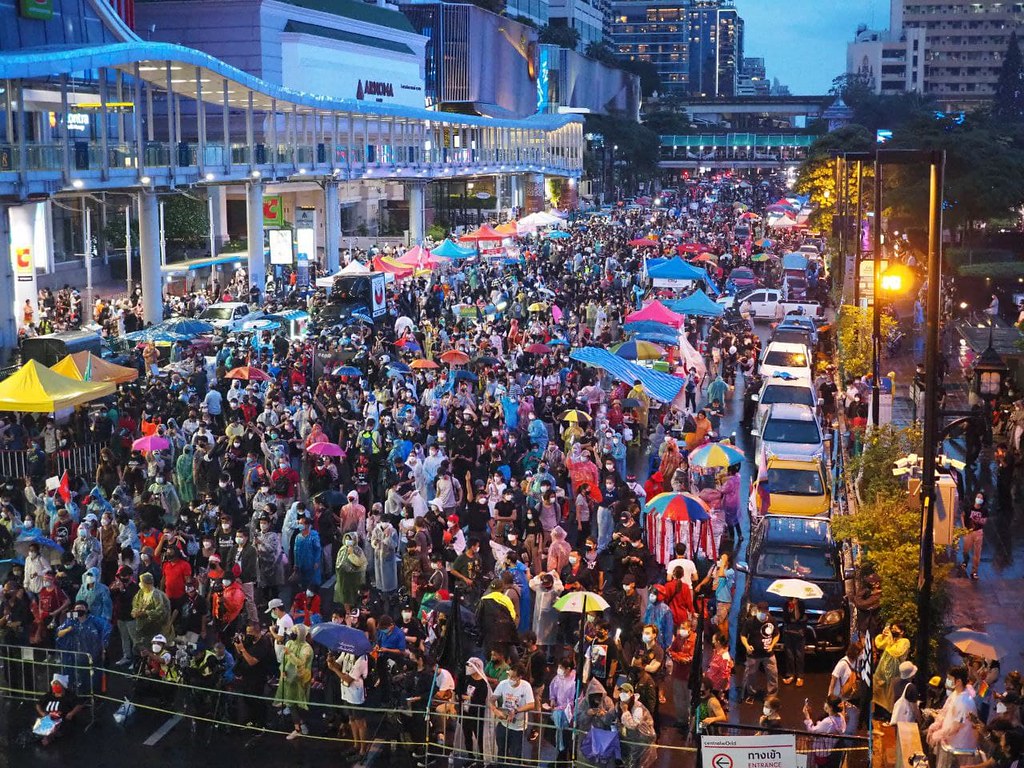 People take over the road that leads to Ratchaprasong Intersection.

The march took place around 15.00 and concluded at 20.30 . Representatives of legal watchdog iLaw were at the scene collecting signatures for a petition demanding that parliament abolish Section 112 of the criminal code which stipulates punishment for anyone who defames, insults or threatens the King, the Queen, the Heir-apparent, or the Regent.

Meanwhile, people gathered at “Uncle Nuamthong Pedestrian Bridge”, in front of the Thairath newspaper office on Vibhavadi Rangsit Road to commemorate his suicidal protest and his death. 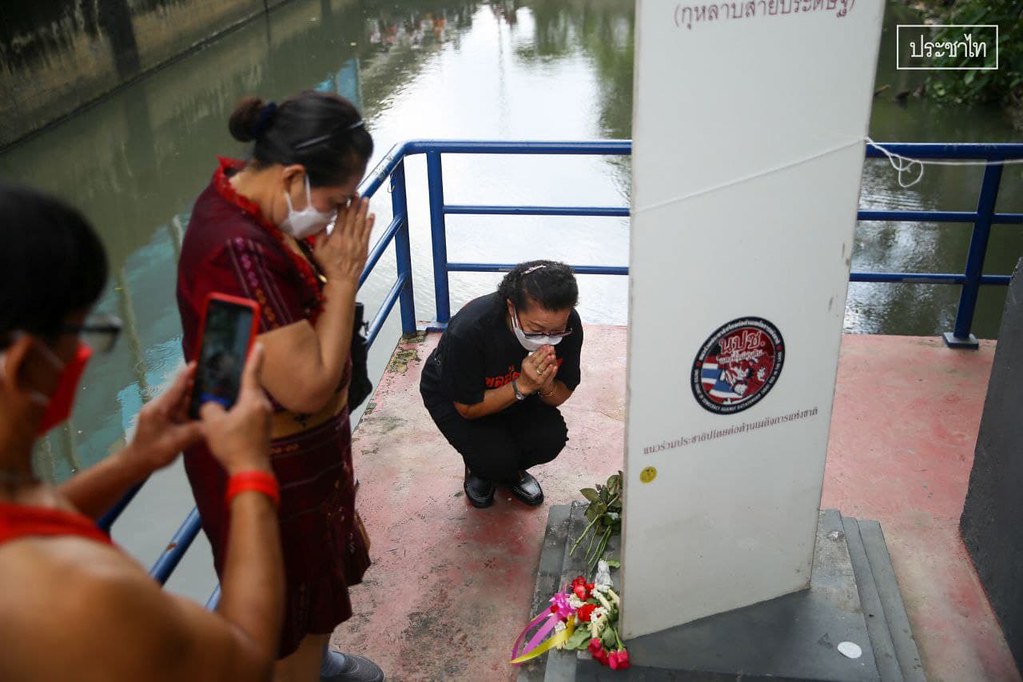 On this day in 2006, Nuamthong Praiwan, slammed his taxi into a military tank near a military headquarters in Bangkok. The seriously injured driver told the press he wanted to protest against the coup committed on 19 September that year.

At the opening of the event, Pol Col Kritsana Pattanacharoen, deputy spokesperson of the Royal Thai Police Office, stated the protest was in violation of both the emergency decree and Contagious Disease Act. He added that police planned to monitor the event and collect evidence so that charges could later be brought against anyone breaking the law.

Yingcheep Atchanont, an iLaw spokesperson, noted growing frustration among members of the media, politicians, bureaucrats and the public with a law that left them unable to talk about the impact of monarchy-related issues on their lives. 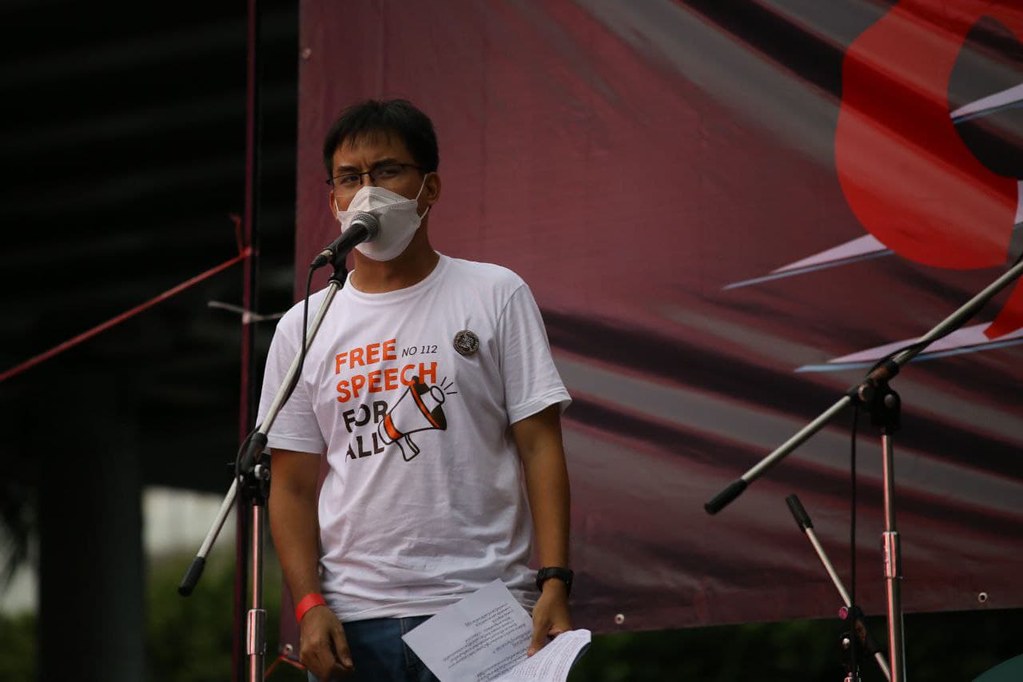 “We believe that it would be better to have a concise law that lets people understand what can be said and what cannot, a law that leaves us confident that if what we said say is true, reasonable, and of benefit to the public and nation, we can speak freely and never be accused of wrongdoing.”

“We believe that it would be better if individuals who defame and damage others are tried under a just law by impartial court officers who decide cases on the basis of facts and law, irrespective of the political atmosphere,”

We believe, when people are in fundamental disagreement over the country’s problems, that it is better to put everything on the table and talk.  Let parties to the dispute put forward their arguments and debate the evidence.  Let people everywhere listen and participate in deciding what to do. ”

“We believe it would be better to live in a society where people are not imprisoned for simply expressing their political opinions, for demanding a better society, and for asserting that the people are the true owners of power in the country,” said Yingcheep.

Supitcha Chailom, a student activist charged under Section 112, also gave a speech at Ratchaprasong Intersection. She said Section 112 is being used by the state to harass and stoke fear among the people to keep them from criticising the monarchy and calling for monarchy reform. In the recent past, people have been charged for questioning the Kingdom’s vaccination rollout, mocking the royal dog, and even reciting part of a poem. 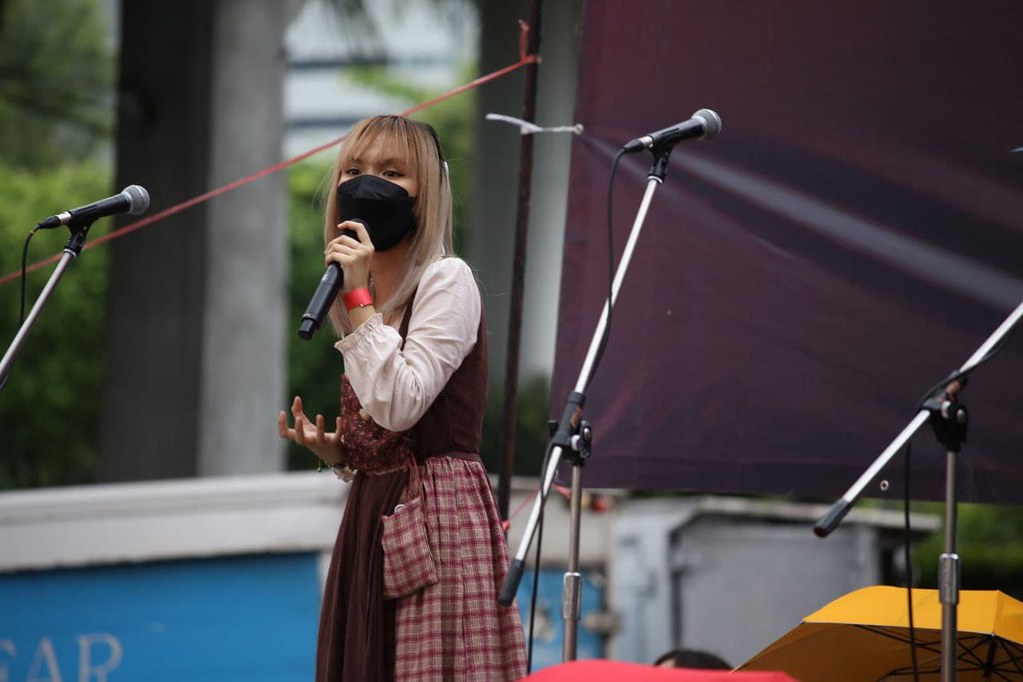 “The more you use [Section 112], the more likely it is that the thing you wanted to protect will come crumbling down,” said Supitcha, urging people to sign the petition to abolish Section 112.

Phromsorn Viradhammajari from Ratsadon Mutelu group also gave a speech, noting that although the monarchy is a state organization that receives a national budget, there is no public oversight of the many appointed royal officers and established royal projects.

He said feudalists have been using the monarchy and Section 112 to oppress people by claiming that those who rally for democratic reform are trying to uproot the royal institution.

“Actually, we love the monarchy. If we didn’t love it, we wouldn’t want to reform it to be under the constitution. It is because we love it that [we] ask for reform. Because if it’s not reformed, there could be a revolution.”

At the end of the protest, Panussaya Sitthijirawattanakul, a student activist from Thammasat University read a statement from the Ratsadon group making two main demands: granting bail to all detained political activists and abolishing Section 112.

“The ten demands to reform the monarchy proposed on 10 August 2020 were meant to fundamentally address political deadlocks in Thailand and raise questions about cults of personality. These demands were made to see Thailand become a constitutional monarchy, a characteristic of which is that the throne is under the law and subject to bona fide public scrutiny like any other institution in a democratic system…”

“We, the People’s Party (Khana Ratsadon) for the Repeal of #112, will work with all groups, all sectors, all organisations and all individuals in society to repeal the law and assure the right to bail for political prisoners. We have a dream that Thai society will be prosperous under a genuine democracy, under liberté, égalité, and fraternité,” the statement said.

After reading the statement, Panussaya cut her wrist, making a wound of 112 figure and a cross line on it, underlining their demand for the law abolition. 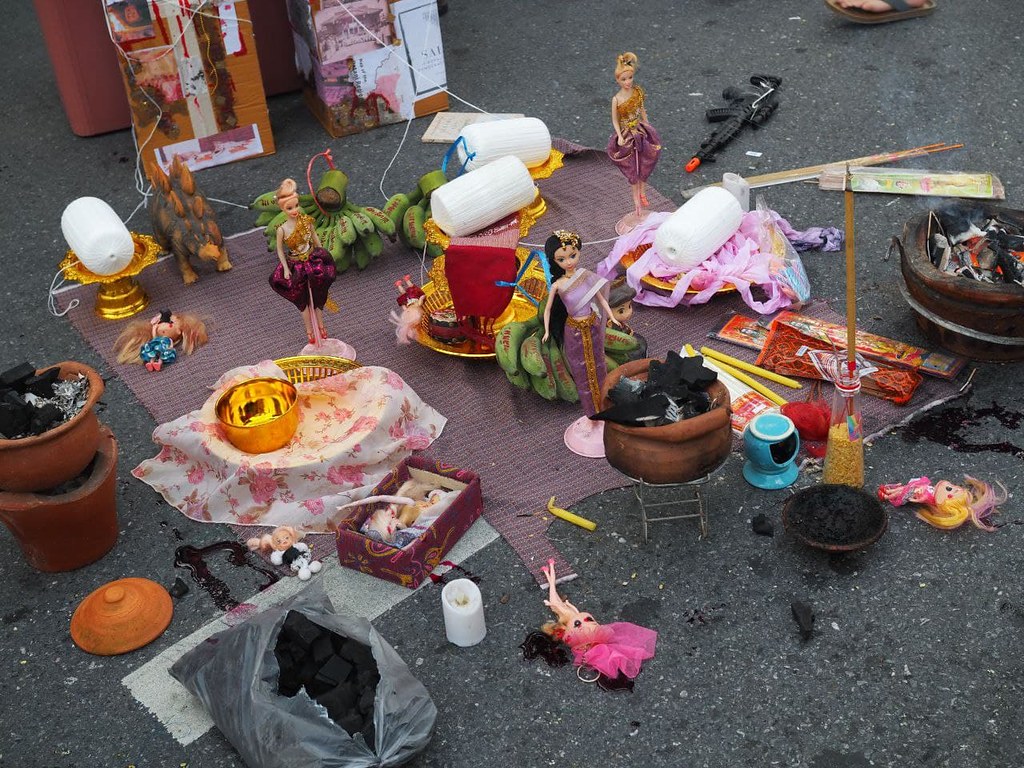 A work of art by ‘Goat in a Graveyard’.

A supernatural-themed work of art made by an independent group of artists, ‘Goat in a Graveyard’. One of the members said they wanted to present a narrative of the political struggle since the 1932 revolution, demanding a reduction in royal power and  commemorating the many women who have been deprived of their rights and killed by political violence.