The public prosecutor has decided to indict Noppasin Treelayapewat, 16, who was charged with royal defamation for participating in a “fashion show” during a pro-democracy protest on Silom Road on 29 October 2020. 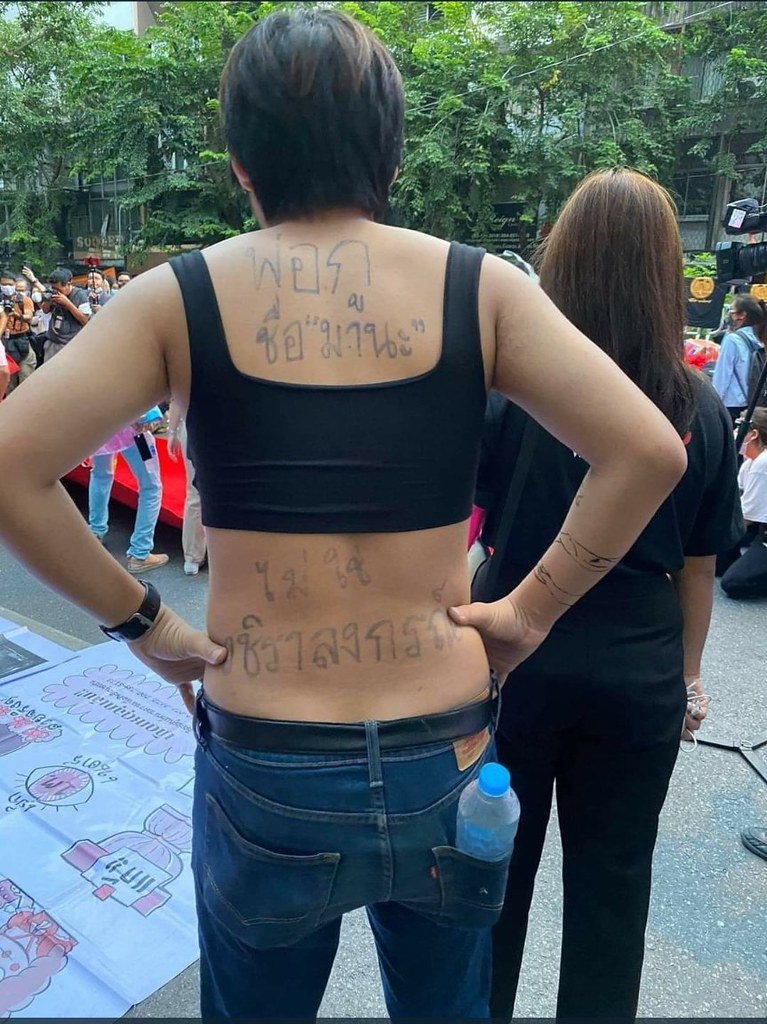 At the “Ratsadorn Catwalk” fashion show, staged at the 29 October 2020 protest, Noppasin is alleged to have mocked the King by wearing a black crop top with the message “My father’s name is Mana, not Vajiralongkorn” written on his back. He was charged with royal defamation under Section 112 of the Thai Criminal Code after a complaint was filed against him by Waritsanun Sribawornthanakit.

Waritsanun also filed a complaint against Jatuporn Sae-Ung, 23, for participating in the same protest. Jatuporn is alleged to have ridiculed the Queen by wearing a pink Thai traditional dress to the fashion show and walking along a red carpet under an umbrella held by another protester.

The public prosecutor decided on 15 July 2021 to indict Jatuporn with royal defamation on 15 July 2021. She was released on bail using 200,000 baht as security. The court also set her conditions that she must not repeat her offences, participate in activities that damage the monarchy, or leave the country.

The ”Ratsadorn Catwalk” took place after it was reported that the Ministry of Commerce received a 13-million baht budget for the overseas exhibition of new products by Sirivannavari brand, a fashion label owned by the King’s younger daughter, Princess Sirivannavari.

The 29 October 2020 protest took place on the same day that Sirivannavari’s new collection launch event was being held at the nearby Mandarin Oriental Hotel. Although there were no speeches, protesters participated in the fashion show, performed, and exhibit artwork to support monarchy reform.

According to Thai Lawyers for Human Rights (TLHR), at least 154 people have been charged with royal defamation for political expression since November 2020.  At least 12 of the defendants are under the age of 18.