Chiang Mai University students petitioned the Chiang Mai University Council, the House Committee on Legal Affairs, Justice, and Human Rights, and the House Committee on Education to have university principle Dr Niwet Nantajit and Faculty of Fine Arts dean Asawinee Wanjing removed from office, after faculty and university administration prohibited students from exhibiting their theses in the University Art Centre as some pieces deal with social and political themes. 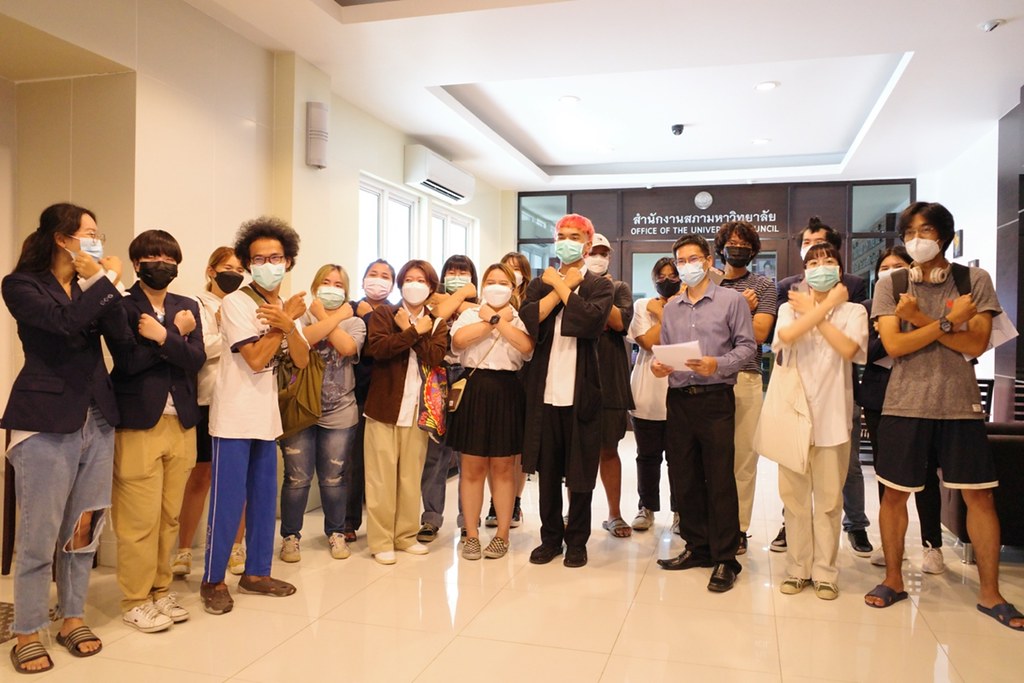 Students from the Media Arts and Design Department and lecturers occupied the University Art Centre on 16 October to set up their exhibition, after the Faculty and University administration refused them permission to use the Art Centre for the thesis exhibition, required for 4th year students in the department, claiming that some pieces are political and therefore inappropriate for a public exhibition. Water and electricity at the Media Arts and Design department building were also cut on Friday night (15 October) and Saturday morning, reportedly by order of the Faculty Dean, while several students were locked inside the building as all gates were locked with chains.

Students also filed a lawsuit with the Chiang Mai Administrative Court on Monday (18 October) for a temporary injunction, as the exhibition is required for the students to complete their project so that lecturers can grade them within the semester. If they are not able to receive a grade, they could fail their class.

At least 60 people went to the Office of the University Council to submit their petition, signed by at least 1,7000 students, lecturers, members of staff, and members of the public demanding that an investigation committee be formed to look into the obstruction of the students’ final thesis exhibition and to see whether to remove from office the responsible members of university administration.

They also demand that students, lecturers, and members of staff be allowed to elect the next set of university administrators, that an investigation be made into other issues caused by the current administration, and that a policy for inquiries into university management be announced to guarantee the protection of freedom of expression and academic freedom. 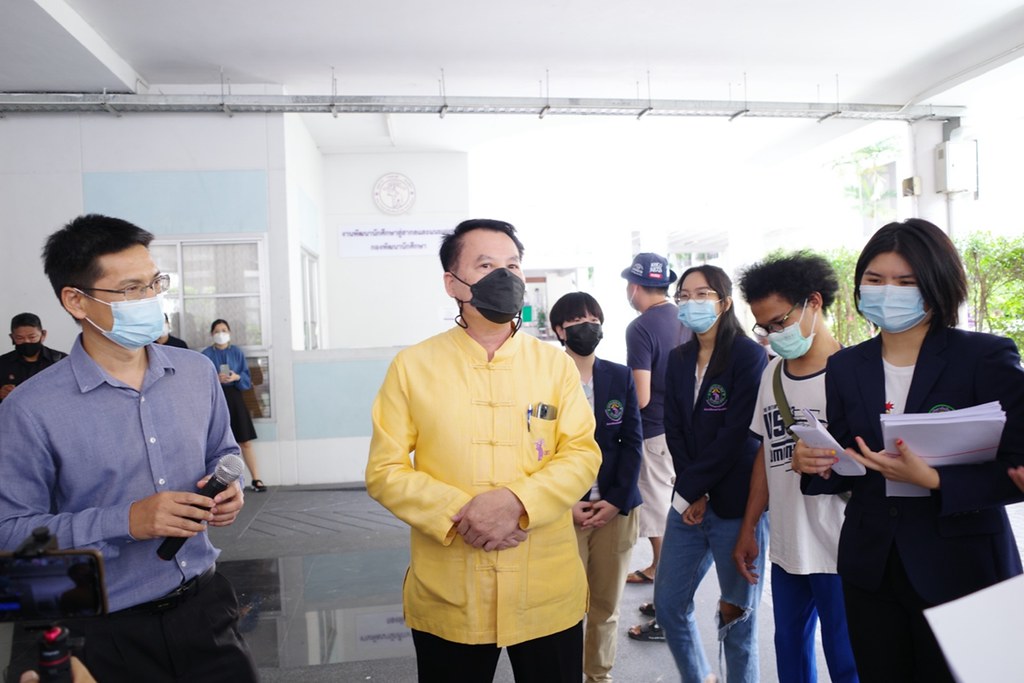 Thatchapan Tritong, a student from the Media Arts and Design Department, said during the gathering that the students have had to pay a lot of money to use the University Art Centre. She said that the rental fee for the Art Centre is charged per day, and could be in the tens of thousands. She questioned why students need to pay to use university space when they have already paid their tuition fees, and added that the administration did not just close the Art Centre but also the department building, which students use as workshops and classrooms. 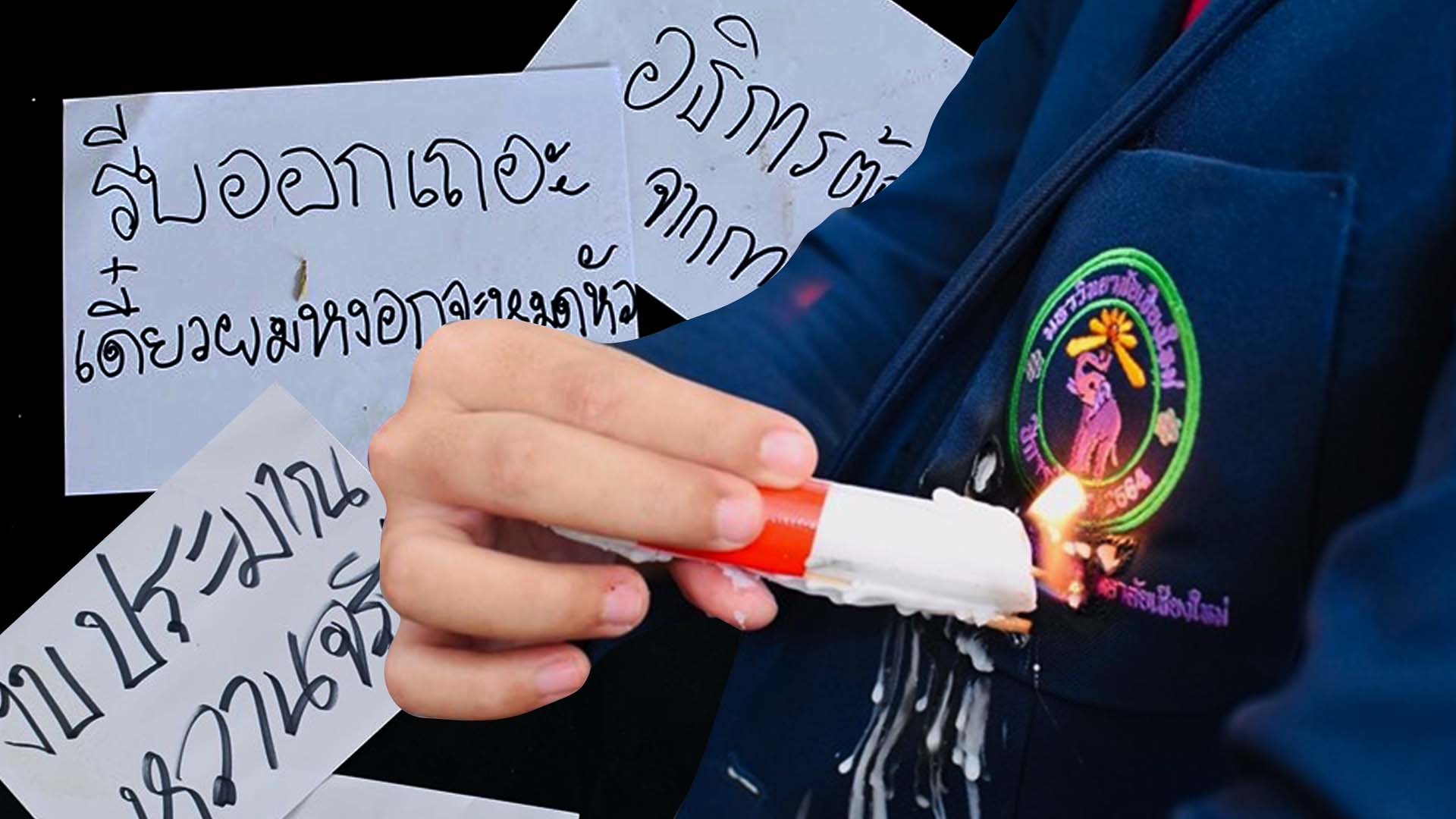 Thanathorn Wittayabenjang, another member of the student union committee, burned off the university symbol on his student union blazer.

Meanwhile, deputy president of the CMU Student Union Navinthiti Jarupratai said that student organizations are not doing a good enough job of protecting the students’ rights, such as in the case of the Faculty of Fine Arts, the call for tuition fee reduction during the Covid-19 pandemic, or the case of students facing legal prosecution for political expression.