On 12 October 2021, Surachai Trongngam, Theeraphan Phankhiri, and Sanya Chongdeeiad, members of a legal team representing Angkhana Neelapaijit and Anchana Heemmina, two women human rights defenders (WHRDs), attended a civil court hearing to settle issues and schedule witness testimony in a case filed against the Office of the Prime Minister and the Royal Thai Army for damages pursuant to the 1996 Act on the Liability for Wrongful Acts of Officials. 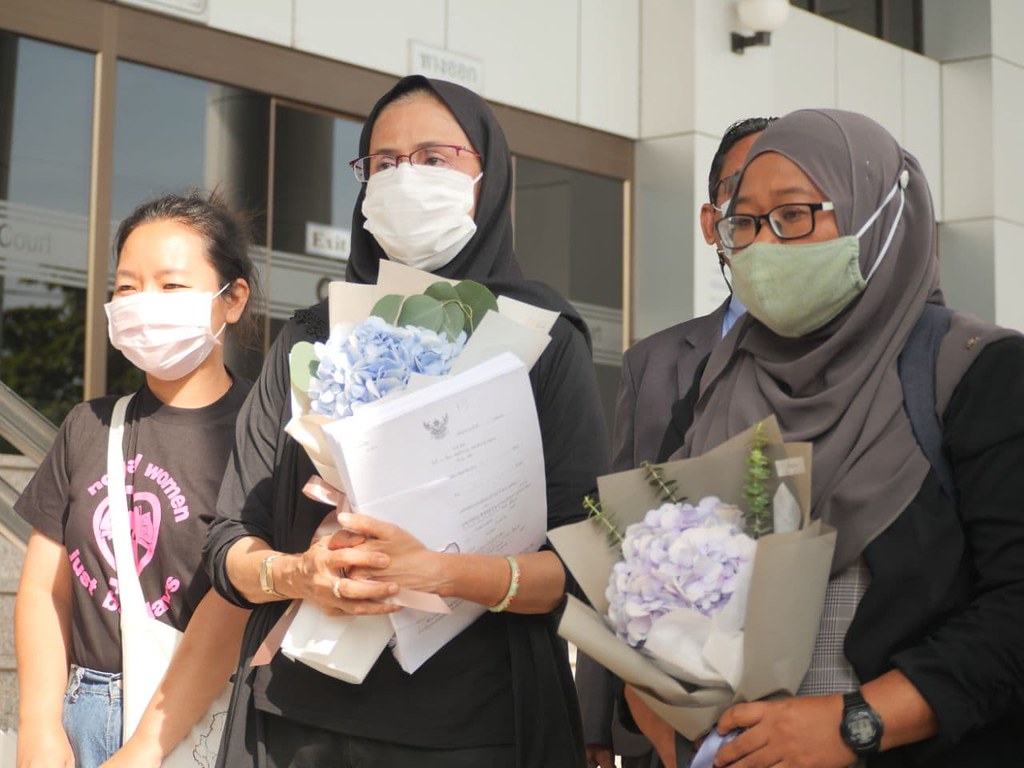 Middle and right: Angkhana and Anchana on the standby at the court.

The case stems from the issues raised during a 2020 parliamentary no-confidence debate in which MP Wiroj Lakkhanaadisorn exposed an information operation (IO) to spread disinformation and smear the reputations of WHRDs using the website Pulony.blogspot.com. The alleged aim of the IO was to damage to the reputations, dignity and mental health of WHRDs.   The case was filed to hold those responsible for the IO accountable.

On 4 November 2020, lawyers representing two WHRDs, Angkhana Neelapaijit and Anchana Heemmina, filed the case against the Office of the Prime Minister, which oversees the Internal Security Operations Command (ISOC), and the Royal Thai Army for damages, demanding three million baht and two million baht respectively. The defendants are alleged to be responsible for the dissemination of disinformation on the Pulony.blogspot.com website to smear the two WHRDs.

After the hearing ended, Sanya revealed that prosecutors representing the defendants assert that his clients  have no legal standing to file the case.  They also contend that the Pulony.blogspot.com website does not belong to ISOC and the Royal Thai Army and that affiliated officials were not involved with  website posts, as alleged by the plaintiffs. They further argued that the case was filed too late, falling outside  the statute of limitations.

Sanya added that the plaintiffs plan to submit additional evidence to establish that ISOC, the Royal Thai Army, and other government agencies were  involved with the running of the Pulony.blogspot.com website.  He added that the evidence would shed light on the utilisation of financial resources in the three southern border provinces by the Army and ISOC Region 4 Forward Command officers.  Due to the complexity of the issues involved experts in various fields would be called to give evidence. Additional evidence and expert testimony would also be used to adduce the nature of state information operations.

“It has been clear to us from the beginning that  state information operations in the southern border provinces, and in the Army Region 2 case raised during the parliamentary debate, have been very professional. Masterminds have been shielded and the dissemination process has been systematically organised. It makes it challenging to pin down those responsible for such actions,

"But we believe we will be able to shed light on the overall structure harboured by the state. It will lay bare how the state has been perpetrating such information operations and how much money has been used for such operation. We will try our best to establish these links, despite the circumstances we are operating under," said Sanya. The Civil Court has scheduled witness examination to take place on May 10, 11, 17 18 and 19 2022.

Angkhana thanked the court for agreeing to review the case. It is the first time that a party humiliated by an information operation has been  able to file a case in the court of justice.  In the past, human rights defenders (HRD)  have been victimised by IOs designed to promote hatred, particularly against WHRDs. State agencies in charge have failed to protect the rights of injured parties and end such operations, let alone bring perpetrators to justice.

“Over the past several years, I have been the victim of a smear campaign perpetrated via an information operation and am looking to find ways to restore justice for myself. I have reported cases to the Technology Crime Suppression Division (TCSD) and made inquiries with officials in local precincts. Thus far, the perpetrators have not been brought to justice. Worse, such websites and information operations have been allowed to continue unabated, harassing and humiliating members of  the public, particularly HRDs.”

“I have no worry filing this case even though the burden of proof lies with the injured parties. It is after all an uphill task to prove the case since the defendants are public agencies. Still, I believe the court will bring me justice.”

“As to the evidence adduced, it includes documents produced by the public agencies and furnished to the House Budget Scrutiny Committee. They are all official documents. As the opposition parties have raised questions to the Prime Minister about state efforts to smear HRDs, I believe  the state should show its courage by accepting the responsibility and liability, offering remedies to the victims. They should not protect the agencies, and  officials implicated in such offences. Nor should they treat the acceptance of liability as a loss of face. I believe that by filing this case, I can be part of the effort to expose the truth and ensure the victims receive remedies. This will serve public interest and lead to the protection of people’s rights from the violations by the state,” said Angkhana.

Anchana said that the case was a response to the commission of a wrongful act, as well as an effort to reveal the wrong and put things right. She hopes the case will help everyone to understand what the state should have done and what they should not have done. She thanked supporting organisations for doing their best to help and added her hope that the case would shed light on things that should not have happened to anyone. Rather than using public resources to attack or to discredit people, she proposed that such money be used to protect people’s rights.

Pranom Somwong, a representative of Protection International, an international organisation that provides support to WHRDs, said that the harassment of WHRDs is being closely monitored by United Nations agencies. In its latest report the UN Human Rights Committee noted that Thailand is a place where civilian HRDs are often targeted for reprisal.

Among the cases mentioned was that of Angkhana Neelapaijit, her allegations against the Office of the Prime Minister and Royal Thai Army, and her petitioned to have the reported fake news, offensive content and disinformation removed.  Reports of the UN Secretary General also  note  that  local HRDs frequently meet with intimidation and online smear campaigns.