Sitanun Satsaksit, sister of missing activist in exile Wanchalearm Satsaksit, has been charged with violation of the Emergency Decree for giving a speech at a protest on 5 September 2021 at the Asoke Intersection. 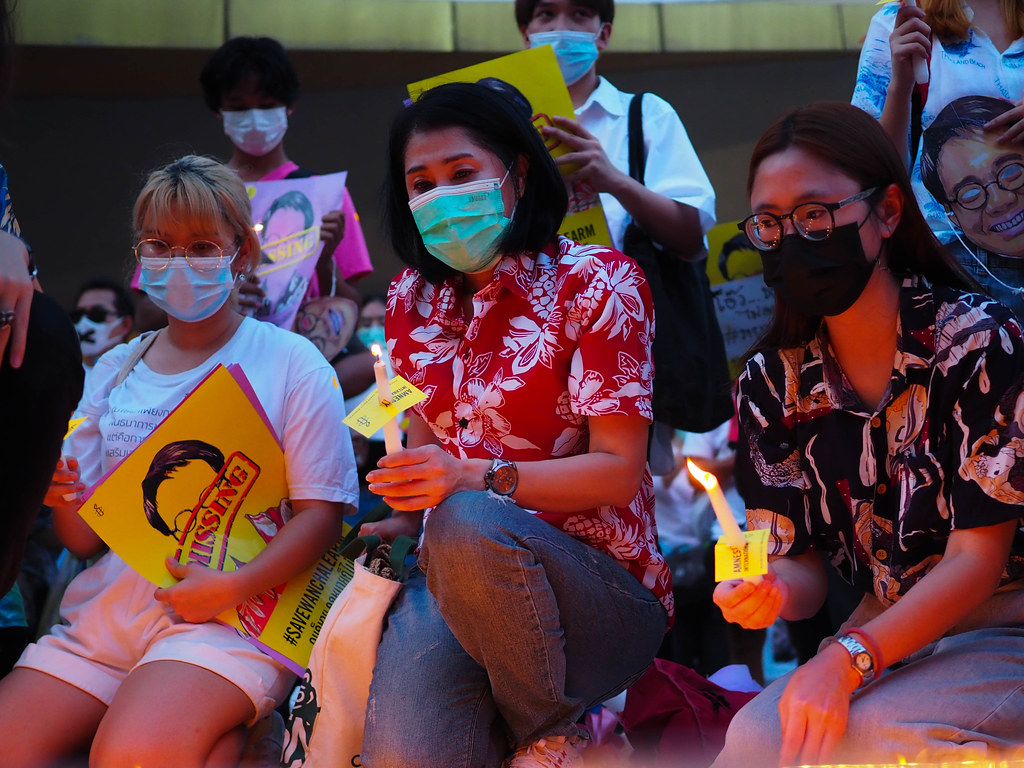 11 other people have been charged with violation of the Emergency Decree for participating in the same protest and were summoned to Thong Lo Police Station on 27 September 2021 to hear the charges. However, according to the Cross-Cultural Foundation, Sitanun did not receive either of the summonses sent to her. She later contacted  Thong Lo Police Station and found that the summonses were not delivered to her address, and that an arrest warrant might be issued if she does not report to the police. Her lawyer therefore contacted the police so that she can report to them to hear the charges.

Sitanun said that she feels hopeless that not only are the Thai authorities not helping her find her brother and bring the perpetrators to justice, they are also trying to silence her by filing charges against her, even though she is fighting for the rights of her brother and other victims of enforced disappearance. She said that she has no other option but to speak out about the failure of the justice system in investigating her brother’s disappearance, and asked whether expressing her support for the anti-torture and enforced disappearance bill is such a threat to national security.

“Is it such a threat to national security that I join the campaign for the Prevention and Suppression of Torture and Enforced Disappearance bill that you have to file charges to silence a victim? I am just calling for justice for someone in my family, but the government sees me as an enemy,” Sitanun said.

Sitanun’s brother Wanchalearm went missing on 4 June 2020, while living in exile in Cambodia. His fate is currently unknown, and no progress has been made in the investigation into his disappearance. Meanwhile, Sitanun has been spearheading the search for her brother and became a vocal supporter for the anti-torture and enforced disappearance bill, which was recently submitted to parliament.

At the 5 September 2021 protest, Sitanun gave a speech on torture and enforced disappearance, during which she asked why dissenters are harassed and are not able to even stay in Thailand. She said that these people should have the right to stay in the country, but they are forced to go overseas and live in exile, and noted that her brother has been on a government “watch list” since 2014.

A “watch list” document was leaked in late August 2021, which included at least 183 activists, politicians, and members of civil society organisations, all of whom have been critical of the government.

“I don’t know why people with different opinions have to be a threat to national security. Are they the nation? As far as I know, they are soldiers who live off taxpayers’ money. Can’t we have different ideas from them?” she said during the speech.

Sitanun said that torture is not a phenomenon that takes place after a coup, but has long been taking place in the three Deep South provinces, where people are accused of being separatists. She said that what happened to Wanchalearm and 8 other disappeared activists in exile let people see who the country is being ruled by and who they are fighting, and that she is fighting because she does not want anyone else to suffer the same fate as her family.

She also said that, even though her brother disappeared over a year ago, government agencies has yet to decide who is going to be responsible for investigating his disappearance. She saw that the government is ignoring Wanchalearm’s case in the same way that it ignores the voices of people who are protesting, and said that everyone is at risk if we are still ignorant about things that are not right. She also called for people to support the anti-torture and enforced disappearance bill.

Under the State of Emergency declared in late March 2020, public gatherings are banned and many activists and protesters are facing legal prosecution for violation of the Emergency Decree. According to iLaw, at least 1171 people are now facing charges of violating the Emergency Decree for joining protests.