The Constitutional Court has postponed to 14 December 2021 a hearing on a petition filed by an LGBTQ couple and the Foundation for SOGI Rights and Justice (For-SOGI) to rule whether the current Thai marriage law violates the 2017 Constitution. 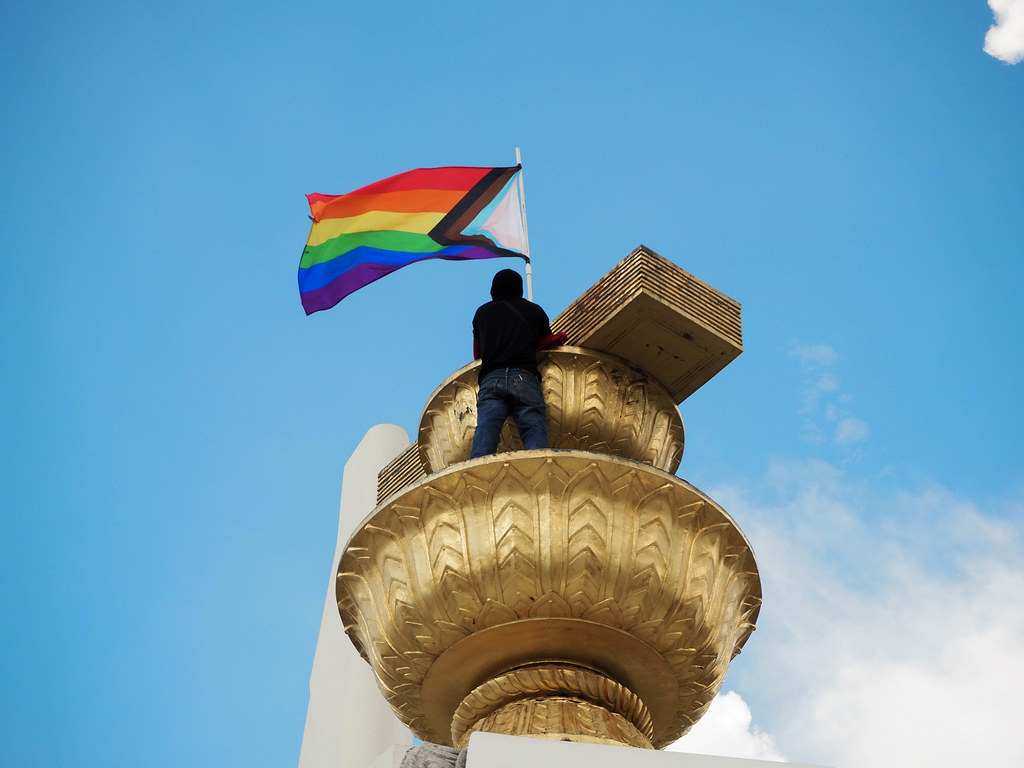 A Pride flag, symbol of the LGBTQ rights movement, was placed on top of the modelof the Constitution above Democracy Monument during a protest on 22 August 2021.

Permsap Sae-Ung and Puangphet Hengkham first filed a petition with the Constitutional Court in November 2019, asking to Court to rule whether Article 1448 of the Thai Civil and Commercial Code, which states that marriage can only be contracted between a man and a woman, violates the Constitution.

Under Section 27 of the 2017 Constitution, all persons are “equal before the law, and shall have rights and liberties and be protected equally under the law.” This section also states that “unjust discrimination against a person on the grounds of differences in origin, race, language, sex, age, disability, physical or health condition, personal status, economic and social standing, religious belief, education, or political view which is not contrary to the provisions of the Constitution, or on any other grounds shall not be permitted.”

Earlier in 2019, Permsap and Puangphet, along with For-SOGI, filed a complaint with the Ombudsman on the grounds that denying marriage registration to LGBTQ couples is discrimination. However, on 27 August 2019, the Ombudsman ruled that since Article 1448 states that marriage can only be contracted between a man and a woman and because the law only considers the gender a person is assigned at birth, denying marriage registration to LGBTQ couples is not gender-based discrimination.

On 22 November 2019, Permsap and Puangphet, together with For-SOGI representatives, went to directly file a petition asking the Court to rule whether Article 1448 is in violation of Section 27 of the Constitution. However, the Constitutional Court dismissed their petition on the grounds that, since the refusal of the Registrar at the Phasi Charoen District Office to register the marriage of the couples is an administrative act, and they need to follow an administrative procedure. 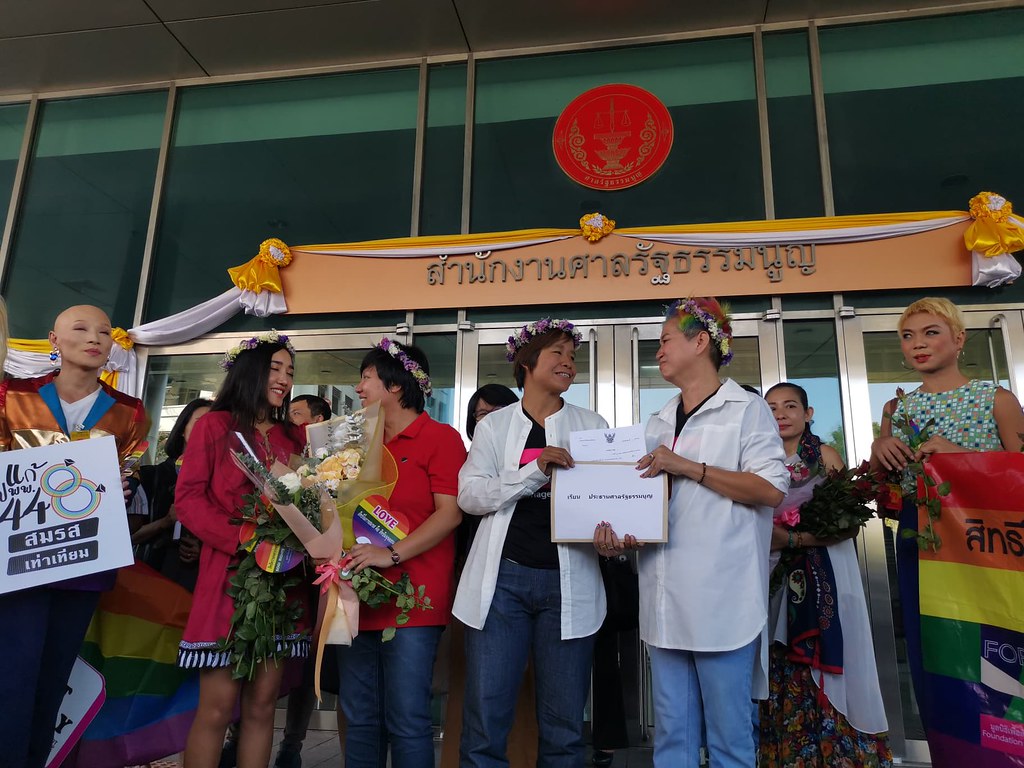 Puangphet (white shirt, fourth from left) and Permsap (white shirt, second from right) after filing their petition with the Constitutional Court on 22 November 2019

Sanya Eadjongdee, the lawyer responsible for the couple’s case, said that the Central Juvenile and Family Court has previously postponed the hearing several times, and that he was told by an official from the Court that the Constitutional Court has issued a ruling, and so the hearing was scheduled for today (28 September), but the hearing was then postponed.

Sanya said that he has informed the Court that they have exhausted every other legal channel. The Court also asked him about the Civil Partnership bill, which was scheduled to go before parliament. Sanya said he told the court that placing LGBTQ couples under a different law means that they are not equal to heterosexual couples, which could be considered discrimination.

He said that the Thai marriage law has existed for almost 100 years without being amended, and if the Constitutional Court rules that Article 1448 does not violate the Constitution, the Court has to offer an explanation to society how marriage equality could be achieved when progress has already been made in other countries.

However, if the Constitutional Court rules that Article 1448 violates the Constitution, Sanya said that every relevant agency and official will no longer be able to use Article 1448 as grounds to refuse marriage registration. The Court might also grant permission to the couple who filed the petition to register their marriage or issue a court order for a registrar at a district office to accept their marriage registration request.

Nevertheless, Sanya said that lawmakers still have to push for parliament to pass a law in accordance with the Constitutional Court’s order, so that there is a law allowing for the order to be put into practice, which might also include amending the Civil and Commercial Code and other ministerial regulations regarding marriage.

A bill proposing amendments to the Civil and Commercial Code, proposed by MPs from the Move Forward Party (MFP), was submitted to parliament in June 2020. It is likely to go before parliament during the next parliamentary session, which will begin in November 2021. The bill proposes that the terminology used in the law be changed to use “spouses” instead of “husband” and “wife” and “person” instead of “man” and “woman.” It also proposed to raise the age at which a person can legally marry from 17 to 18 years.

The proposed amendments will allow individuals to be legally married regardless of gender, and ensure that they receive equal rights, duties, and protection under the law. If the bill passes, LGBT couples who have registered their marriage will be able to adopt children together, make medical decisions on behalf of their partner, and in cases where one partner dies, the other will be able to inherit from their partner and make legal decisions about their partner’s assets.

Meanwhile, in July 2020, the Thai Cabinet approved the Civil Partnership bill, proposed by the Ministry of Justice. However, it still has to be approved by parliament before it becomes law.

This bill defines “civil partnership” as a union between two people of the same gender. To register as civil partners, both persons must be at least 17 years old, and one or both must be a Thai national.

The bill allows civil partners to adopt children, and gives them the power of attorney to act on behalf of their injured or dead partner in a legal proceeding according to the Criminal Procedure Code. It also includes a section on properties between civil partners, which is separated into personal property and property acquired after entering into a partnership.

The Civil Partnership bill has been criticized by the civil society for not giving LGBTQ couples the same rights as heterosexual couples, while putting LGBTQ couples under a different law could deepen the stigma against the LGBTQ community in Thailand and relegate them to the position of second-class citizens.