Student activist Panusaya Sithijirawattanakul was arrested on Wednesday (22 September) and charged with sedition due to her involvement with the Facebook page of the student activist group United Front of Thammasat and Demonstration (UFTD). 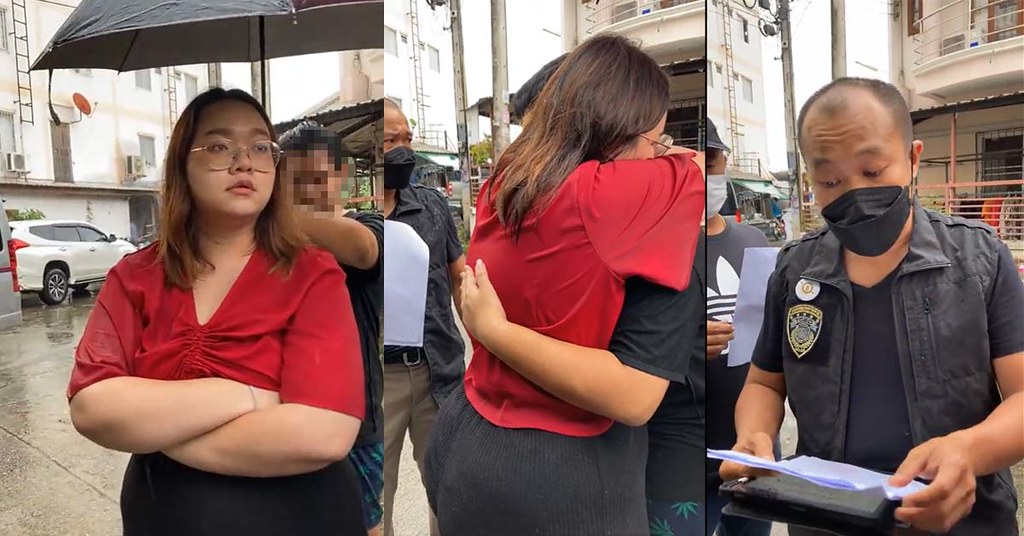 Panusaya was arrested at her home at around 12.30 by TCSD officers

Panusaya was arrested at around 12.30 at her home. She went live on her personal Facebook profile and said that she was returning home and about to attend an online class when plainclothes officers from the Technological Crime Suppression Division (TCSD) approached her and presented an arrest warrant. She said that the officers had likely followed her car and ran up to her as soon as she got out.

The arrest warrant was issued by the Criminal Court and signed by judge Sakda Phraisan. It stated that Panusaya is charged with sedition under Section 116 of the Thai Criminal Code and with entering into a computer system data which is an offense to national security under Section 14 of the Computer Crimes Act.

Panusaya continued live broadcasting via the Facebook profile of student activist Watcharakorn Chaikaew, another UFTD member. During the live broadcast, she asked the officers if she could go inside the house to use the bathroom, but the officers refused and told her to wait for an inspector to arrive.

After an investigation inspector from Huai Khwang Police Station and other officers arrived to serve the warrant on Panusaya , she and her friends were taken to the TCSD headquarters in a police van. The officers told Panusaya and her lawyer, who was on the phone with her, that they have already filed a temporary detention request and wanted to bring her to the TCSD headquarters as soon as possible so that her lawyer has enough time to file a bail request.

Panusaya initially wanted to wait for the arrival of Boonlert Wisetpreecha, lecturer at the Faculty of Sociology and Anthropology, Thammasat University, before going to the TCSD headquarters. However, the officers tried to persuade her to leave quickly as her lawyer is already on the way to the TCSD headquarters, so Panusaya and her friends left in the police van without waiting for the lecturer.

She also asked why the police did not issue a summons before arresting her, but the officers said they did not know and are only doing their job by arresting her.

Thai Lawyers for Human Rights (TLHR) reported that the charges against Panusaya were the result of a complaint filed by Nopadol Prompasit, a member of the Thailand Help Center for Cyberbullying Victims, an online royalist group whose members have filed numerous lèse majesté charges against many netizens and activists, including Parit Chiwarak and Anon Nampa.

Nopadol accused Panusaya of running the UFTD’s Facebook page and inciting people to join anti-government demonstrations, which he said risked the spread of Covid-19 and were not peaceful.

TLHR also said that, according to the inquiry officer’s temporary detention request, the UFTD Facebook page contains what they consider to be seditious messages calling for people to rebel against the authorities, and accusations that police have used excessive force against protesters.

The request also stated that the inquiry officer is opposed to granting Panusaya bail, as the charges are related to national security and she might flee or tamper with evidence. Nevertheless, she was granted bail on 35,000 baht security.

The charges filed against Panusaya are the same as those filed against Niraphorn Onkhao, another UFTD member, who was arrested last Friday (17 September) during a police raid on the house she was staying with Panusaya and student activist Benja Apan. Niraphorn also never received a summons before being arrested.