A week of pro-democracy protests calls for PM’s resignation

The activist group Thalufah has staged daily demonstrations from 16 – 22 August to protest against the government’s mishandling of the Covid-19 pandemic and demand the resignation of Prime Minister Gen Prayut Chan-o-cha. 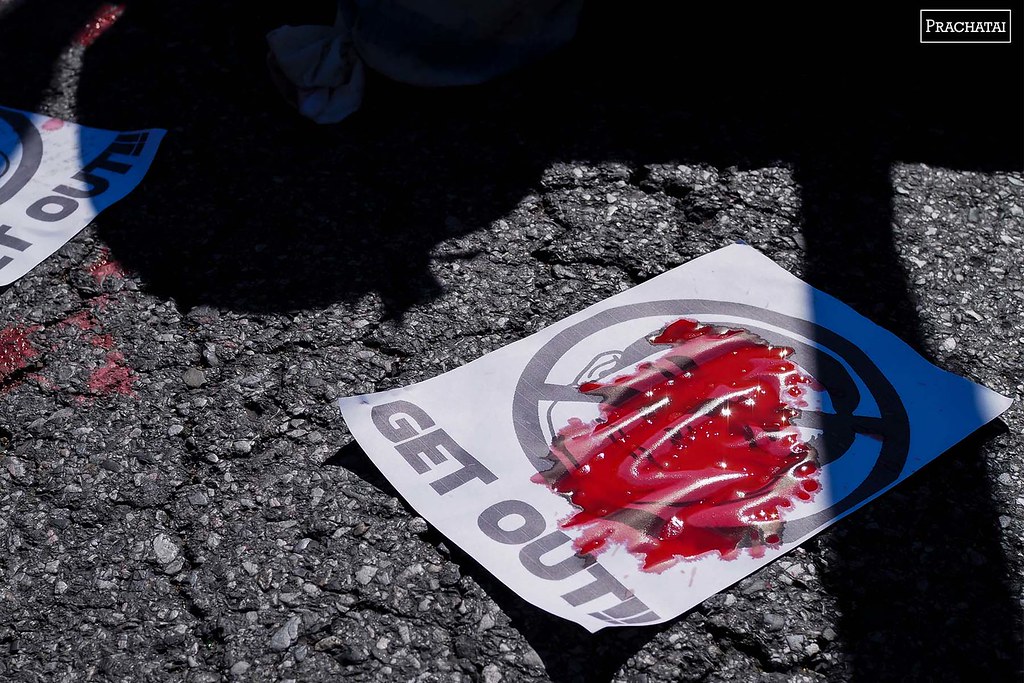 The protests were held despite the fact that two protest marches on Monday (16 August) and Tuesday (17 August) were forcibly dispersed by crowd control police. On Wednesday (18 August), the group staged a protest at the Democracy Monument, the first of their protests to conclude without being forcibly dispersed. 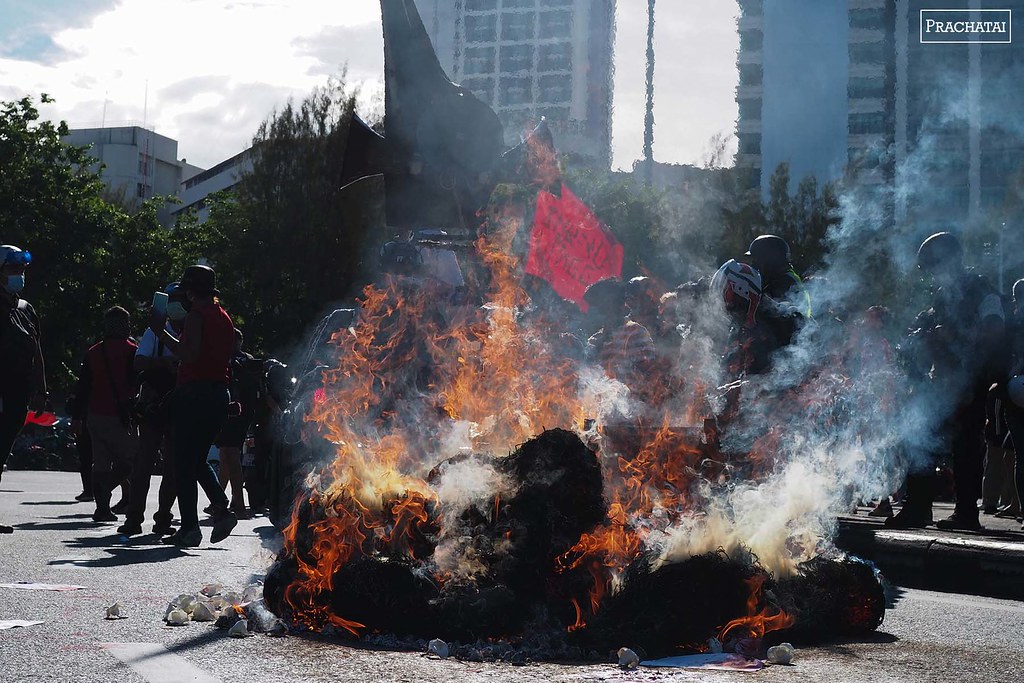 They returned to the Democracy Monument on Thursday (19 August) for another demonstration, during which they wrapped the model of the palm-leaf manuscript representing the Constitution in black cloth to represent the hopelessness of the era. They also burned pictures of the cabinet, government MPs, and senators as a symbolic act of protest. 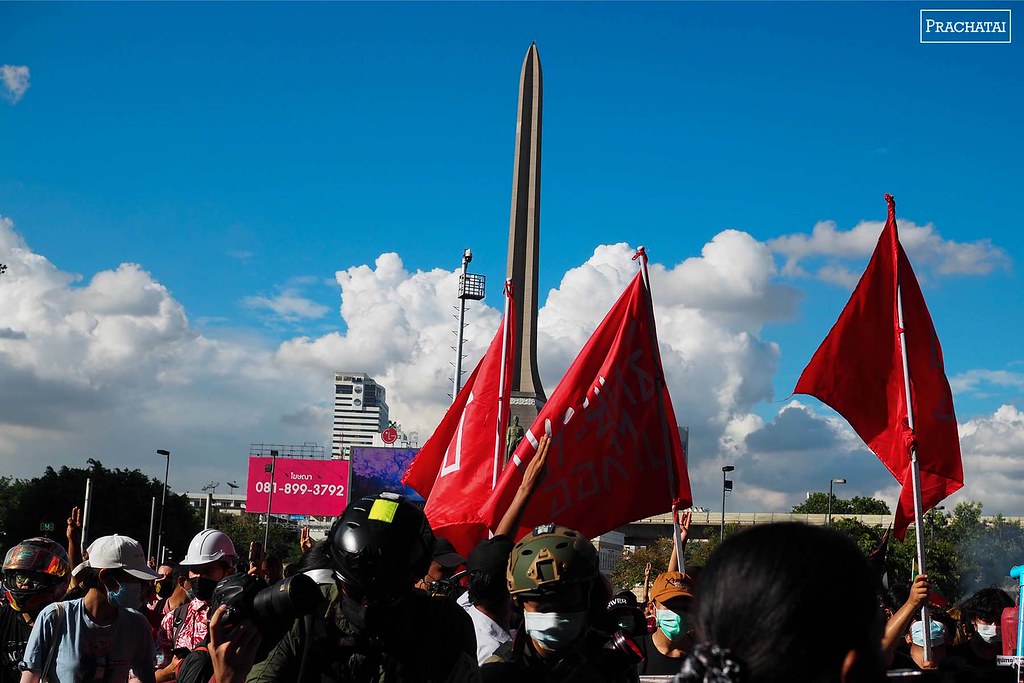 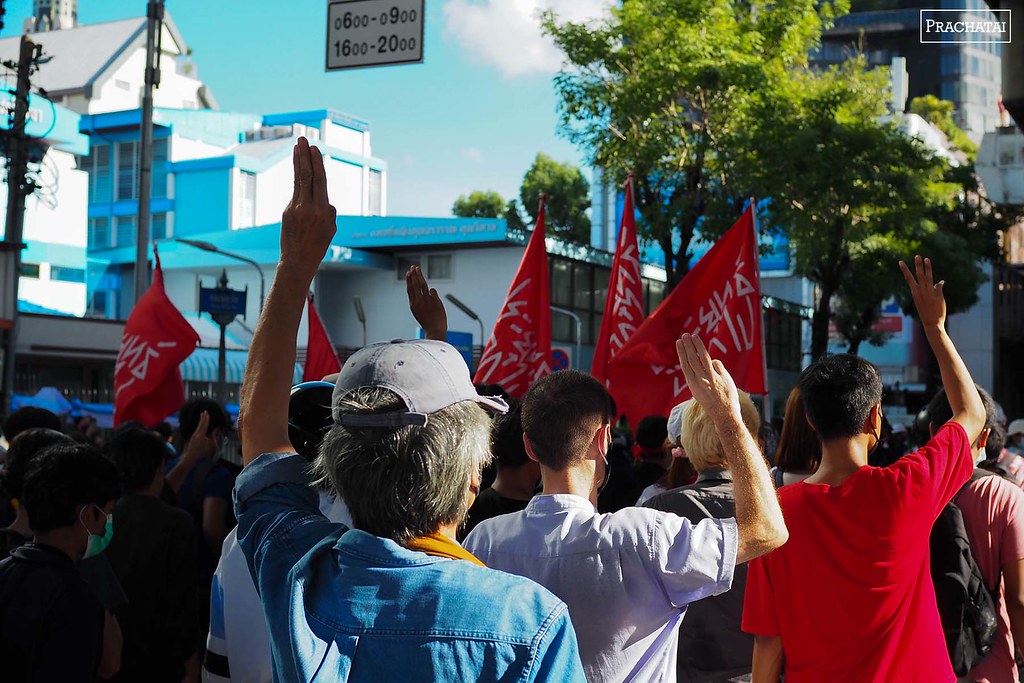 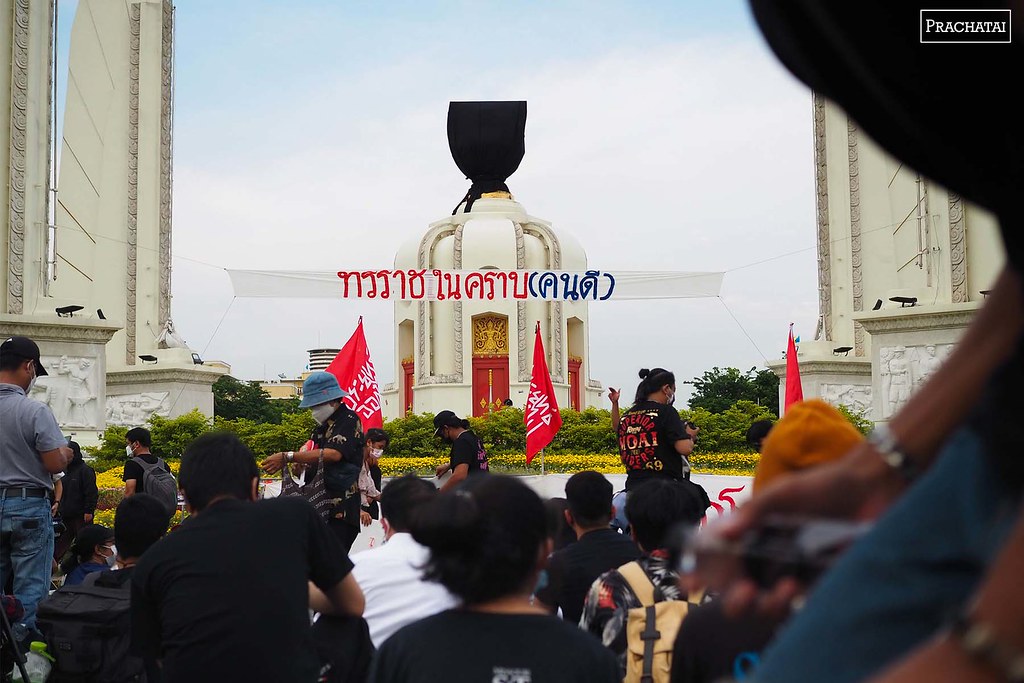 The model of the Constitution above the Democracy Monument being wrapped in black cloth during the 19 August protest. A banner saying "Tyrants posing as good people" were also hung from the Monument. 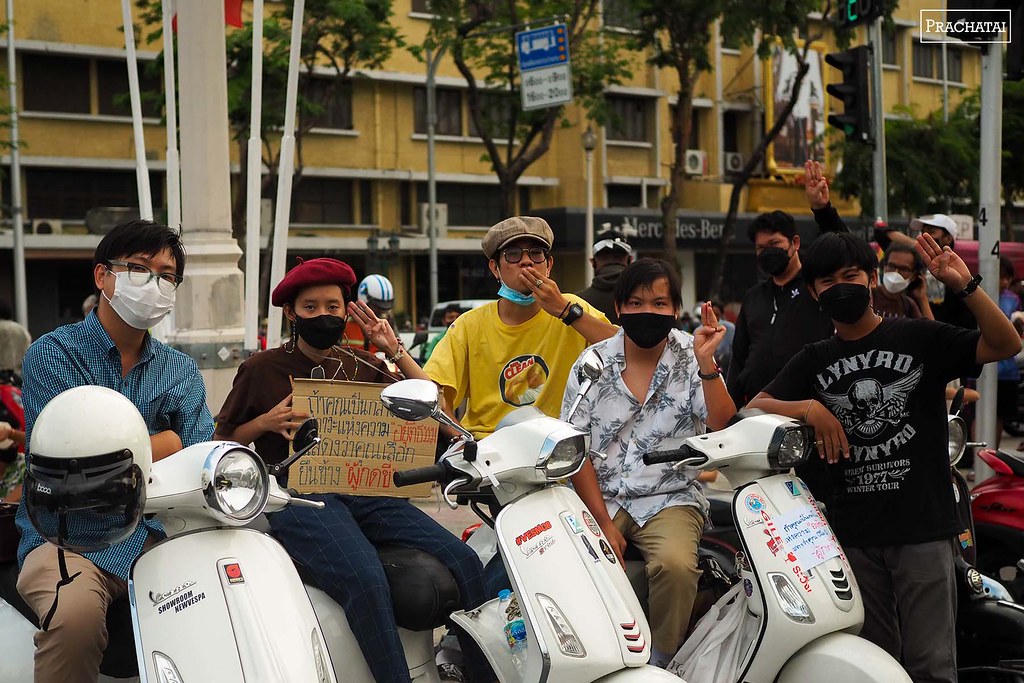 Protesters at the 19 August protest flashing the three-finger salute. One was also holding a placard saying "If you are neutral in situations of injustice, you have chosen the side of the oppressor". 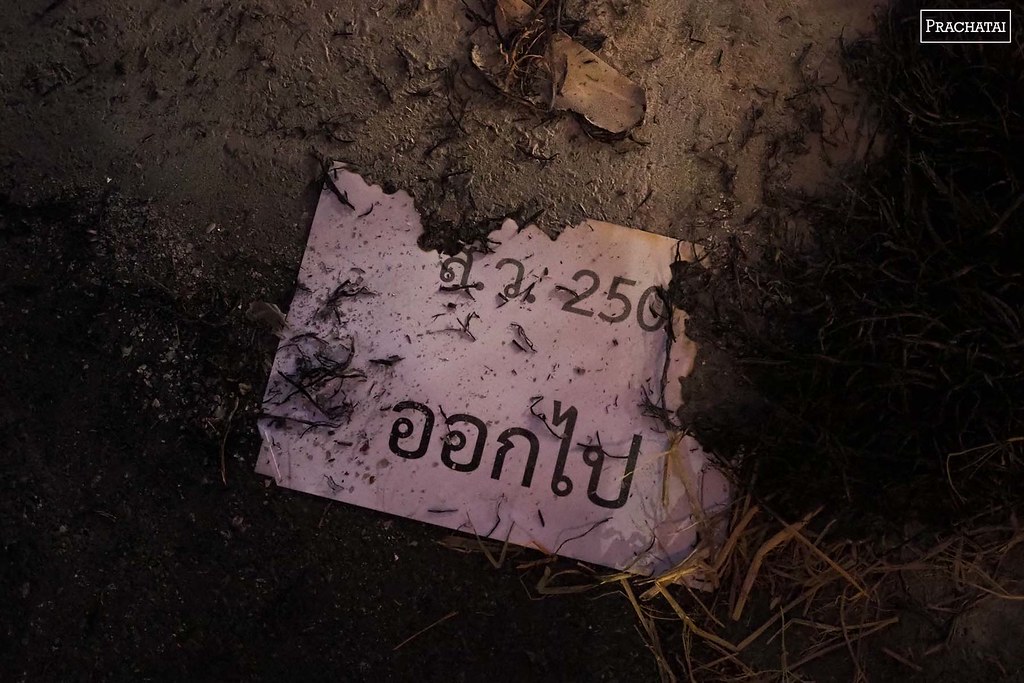 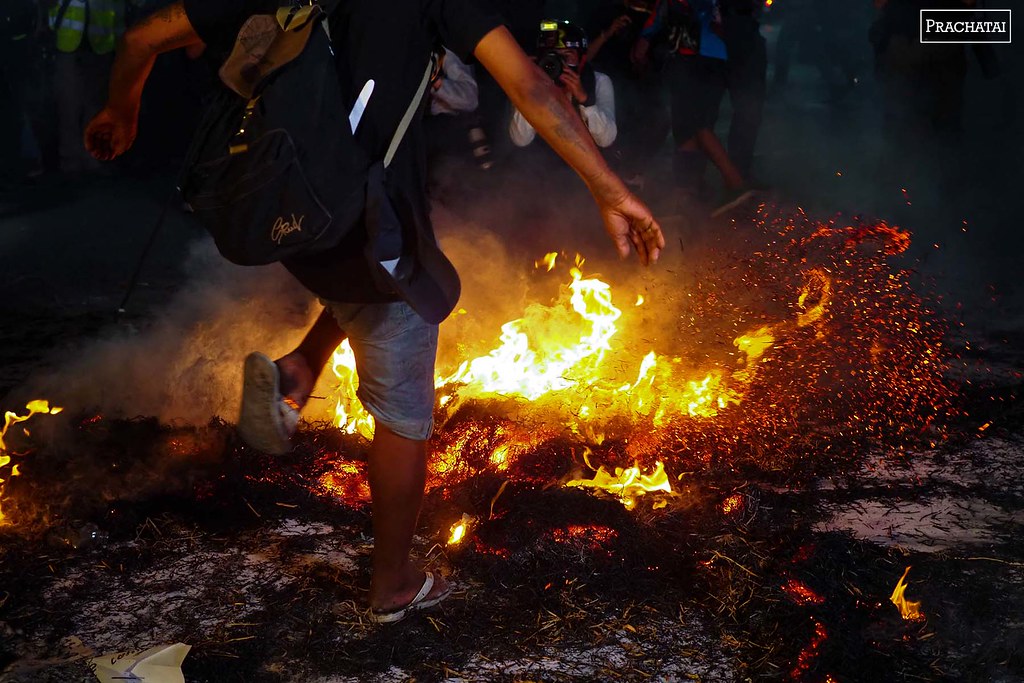 On Friday (20 August), Thalufah organized a protest caravan visiting three embassies across Bangkok to file petitions on the Thai authorities’ use of violence against pro-democracy protesters and the Covid-19 vaccination programme. 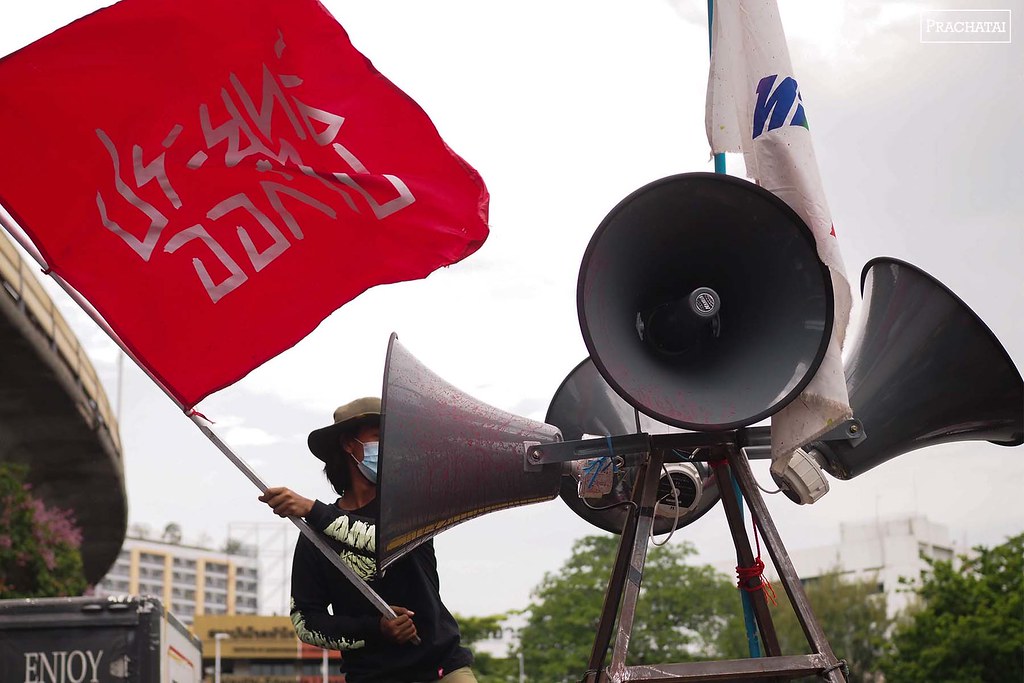 The group first went to the Embassy of Switzerland to file a petition about the recent use of force to disperse pro-democracy protesters, which may have been in violation of the Geneva Conventions and other international laws. The group called on Switzerland, as a member of the International Committee of the Red Cross, to investigate the government under Gen Prayut for possible violation of the Conventions. 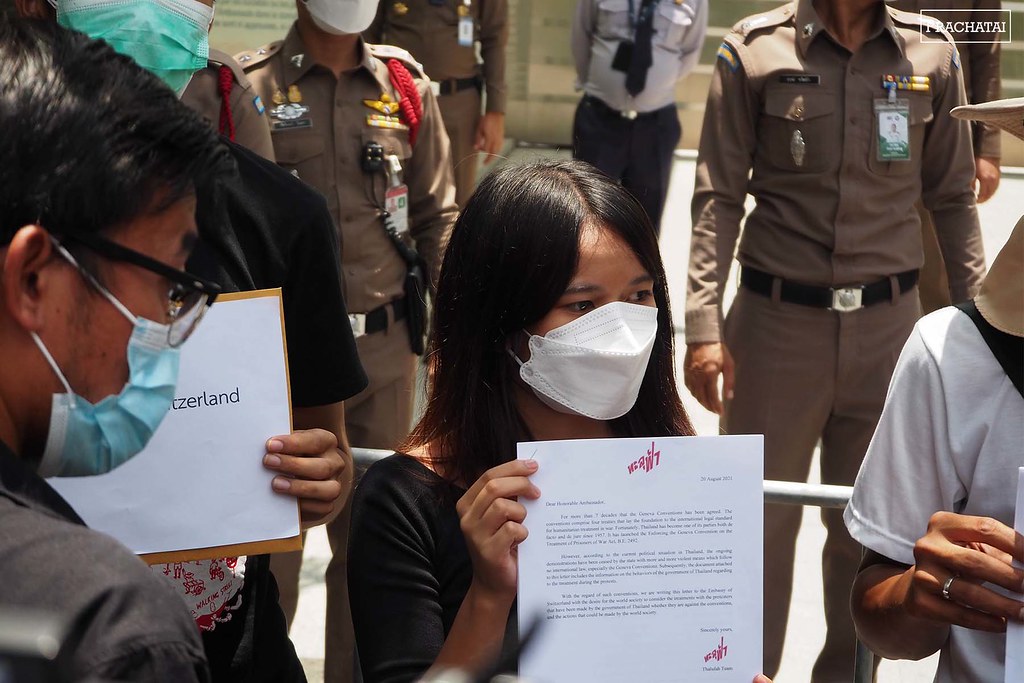 They then went to the US Embassy to file a petition regarding the 1.5 million doses of the Pfizer Covid-19 vaccine donated to Thailand by the US government, after reports that military personnel have received the vaccine, and that frontline medical staff are not receiving enough vaccines, while the names of those who do not work in hospitals appeared on lists of Pfizer vaccine recipients.

It was previously reported that staff at the Bhumibol Adulyadej Hospital found discrepancies in the lists of those who will receive the Pfizer vaccines, which contained the names of staff from other agencies, retired medical staff, and medical students who already graduated, while frontliners were left off the list. 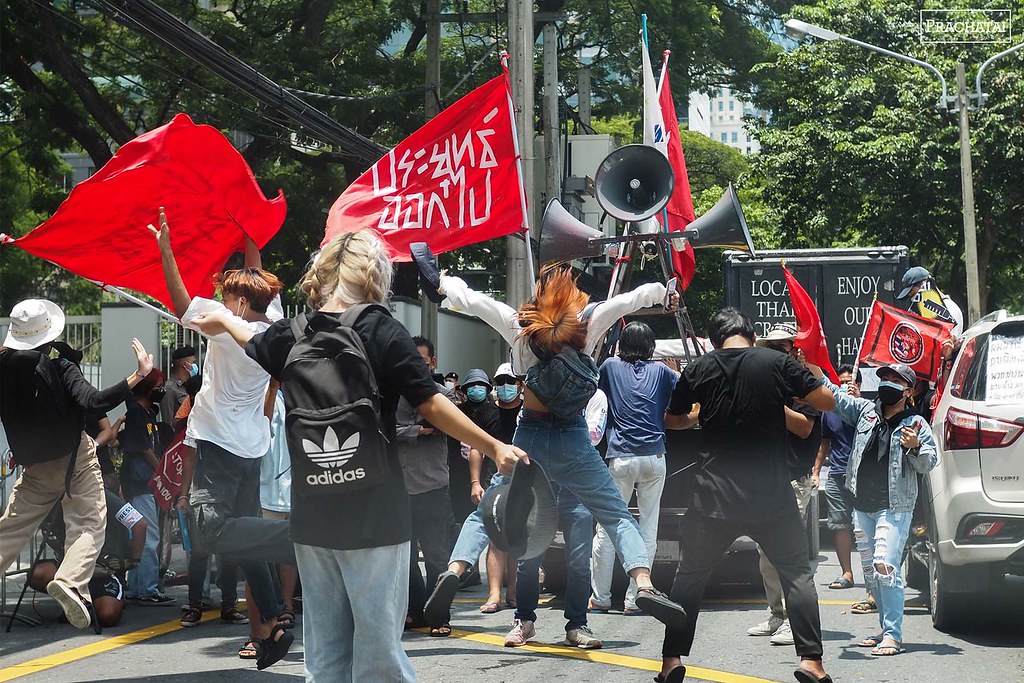 The caravan’s final stop was the Chinese Embassy, where they submitted a petition asking the Chinese authorities to inquire about the Thai government’s purchase of the Sinovac Covid-19 vaccine, and to suspend the purchase. The petition also stated that, since the Thai government is not being transparent about purchasing vaccines from China, the Thai people are unable to trust the Sinovac vaccine, although it has been approved by the World Health Organization for emergency use. There are also questions about Sinovac’s efficacy rates and whether it is effective against the Delta variant of the virus.

It has also been reported that the Embassy sent its head of security to receive the letter. An embassy security personnel took pictures of the group representatives' ID cards, although he insisted that he will not be sharing their personnel information with the authorities. 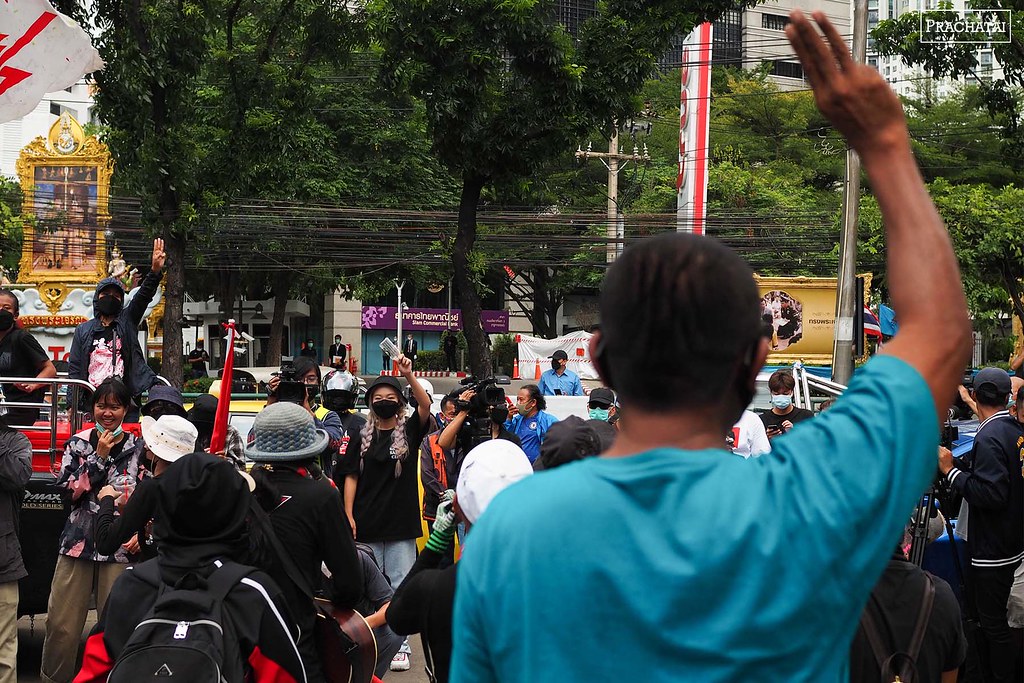 Thalufah also went to the United Nations building on Saturday (21 August), to file a petition with the Office of the United Nations High Commissioner for Human Rights (OHCHR) calling for the OHCHR to investigate human rights violations in Thailand over the past year, especially rights violations in the judicial system, as well as to issue a letter to the Thai government raising concerns about these violations and calling on it to follow international principles. They also asked that the OHCHR provide assistance to pro-democracy activists being detained pending trial in charges relating to the exercise of freedom of expression and right to peaceful assembly.

The protesters returned to the Democracy Monument on Sunday (22 August) with a sports day-themed protest, beginning with a parade from the Khok Wua Intersection to the Democracy Monument, led by Thanat Thanakitamnuay, a former leader of the People’s Democratic Reform Committee (PDRC) who recently joined the pro-democracy movement, holding a sign saying “The people’s fraternity.”

Thanat lost the vision in his right eye after he was injured during a clash between protesters and crowd control police at the Din Daeng intersection on 13 August, after a tear gas canister was fired into his face. His family has vowed to pursue legal action against those responsible for his injuries, saying in a statement that Thanat was exercising his constitutional right to participate in a peaceful protest, while the police violated international crowd control practices by firing tear gas canisters directly at the protesters instead of using a parabolic trajectory. 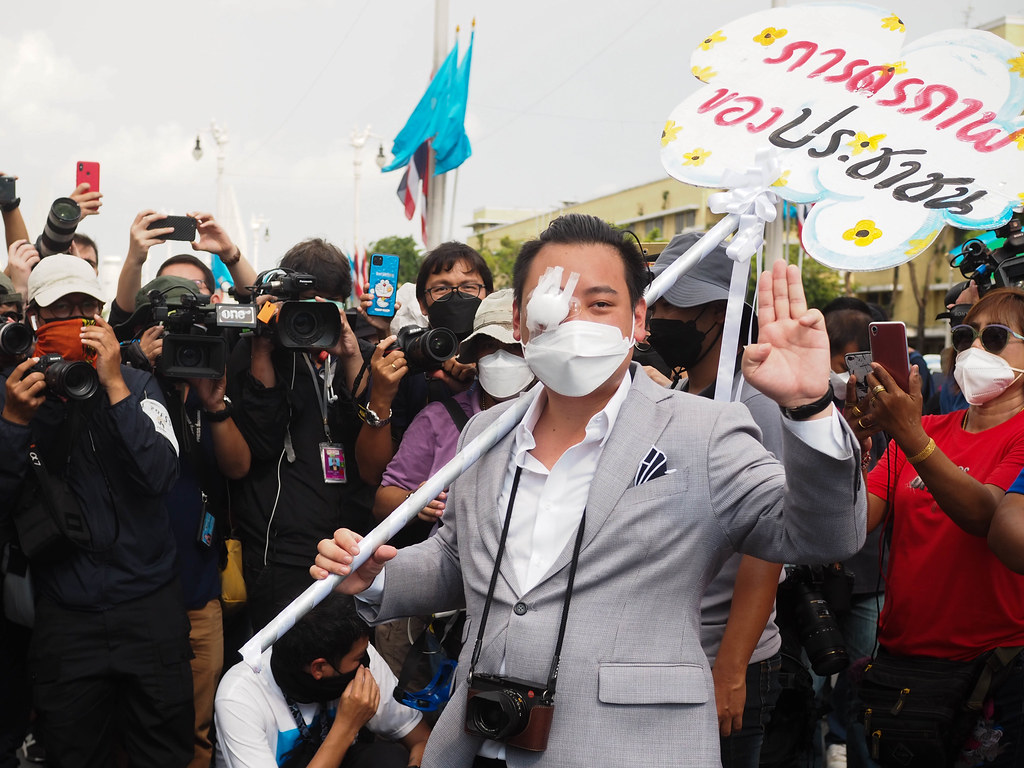 Protesters joining the parade carried banners saying “Prayut get out,” “Draft a new constitution,” and “Monarchy reform.” As the parade went around the Democracy Monument, one Thalufah member spoke about the government’s mishandling of the pandemic, which led to the rising death toll.

A series of speeches were also given during the protest, in-between various sports day games, including tug of war and futsal. A group of skateboarders also staged a performance showing their skating skills, while a vinyl banner with Gen Prayut’s face was set up, at which protesters could throw bags of paint.

The protest ended at around 19.00, with a small fireworks display above the Democracy Monument. 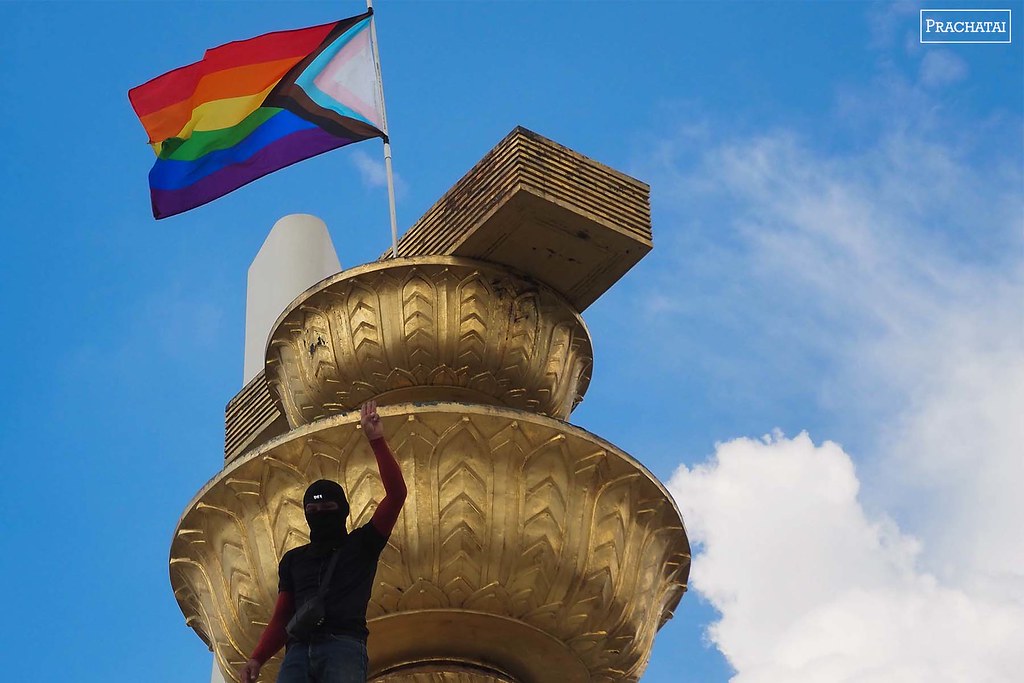 A Pride flag, symbol of the LGBTQ rights movement, was placed on top of the Democracy Monument during the protest 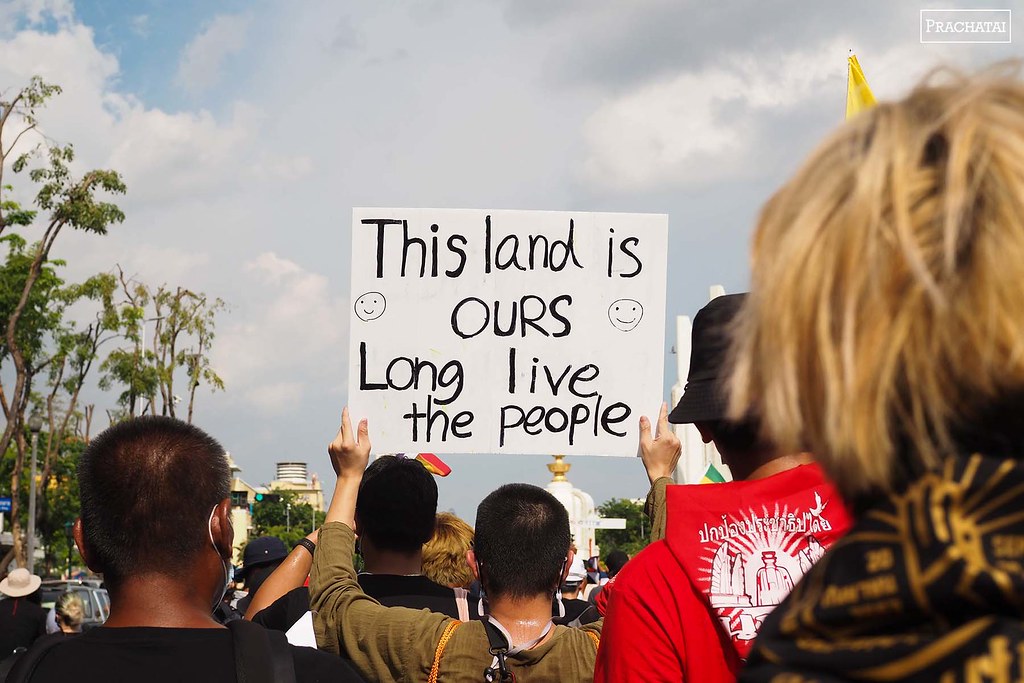 A protester holding up a placard saying "This land is ours. Long live the people" as the parade move to the Democracy Monument. The other side of his placard says "Repeal the lèse majesté law." 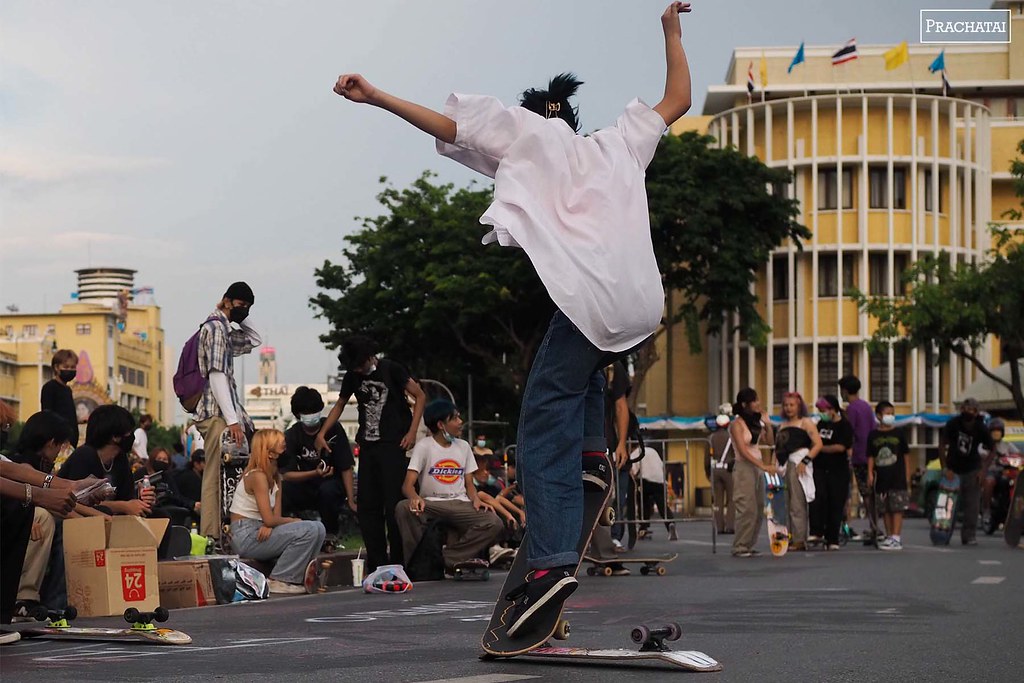 A protester skatboarding next to the Democracy Monument during the protest 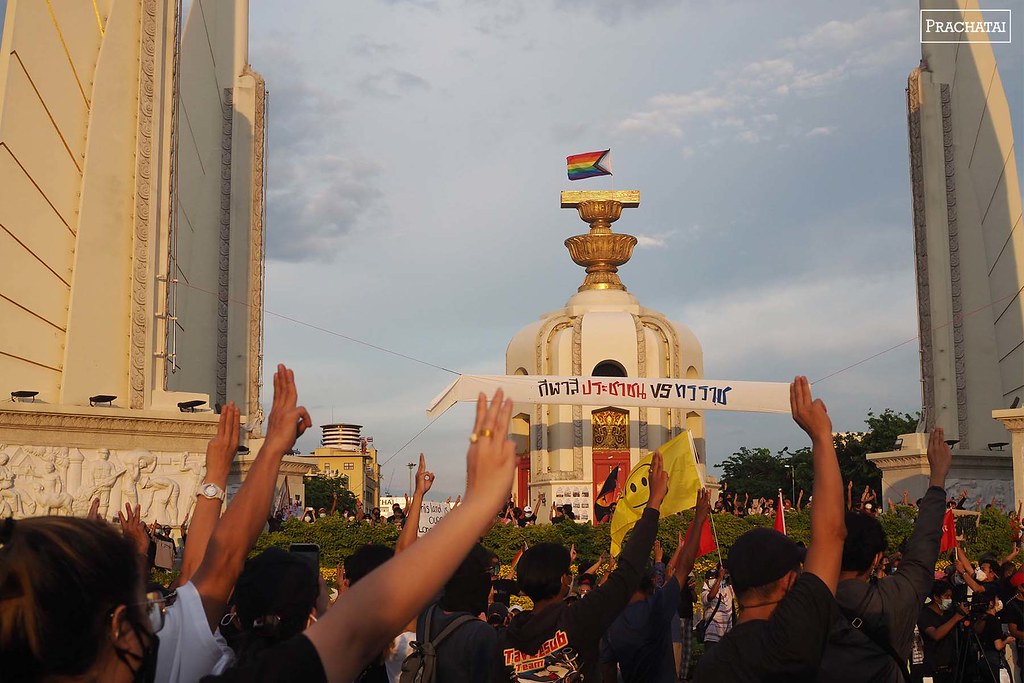 Protesters flashed the three-finger salute while the National Anthem plays

The protesters, most of whom were riding motorcycles, were trying to get past police barriers to the 1st Infantry Regiment headquarters to demand that Gen Prayut resign.

Crowd control police were also stationed in front of the Veterans General Hospital, along with 2 water cannon trucks. At 18.10, the police forced the protesters to retreat by firing tear gas, rubber bullets, and water cannon blasts.

The Din Daeng intersection has been the site of daily clashes between protesters and crowd control police for the past week, as protesters repeatedly attempted to break through the police barriers. Vibhavadi Rangsit Road was blocked off by a row of containers until Saturday (21 August), when they were removed to allow traffic to pass through.

Thai Lawyers for Human Rights (TLHR) reported that at least 42 people were arrested following the protests on Sunday (22 August), 5 of whom were arrested after returning from Thalufah’s event at the Democracy Monument.