Protest march dispersed before it began

A protest march organized by the activist group Thalufah was dispersed by crowd control police armed with tear gas and rubber bullets even before they left their starting point at the Victory Monument. 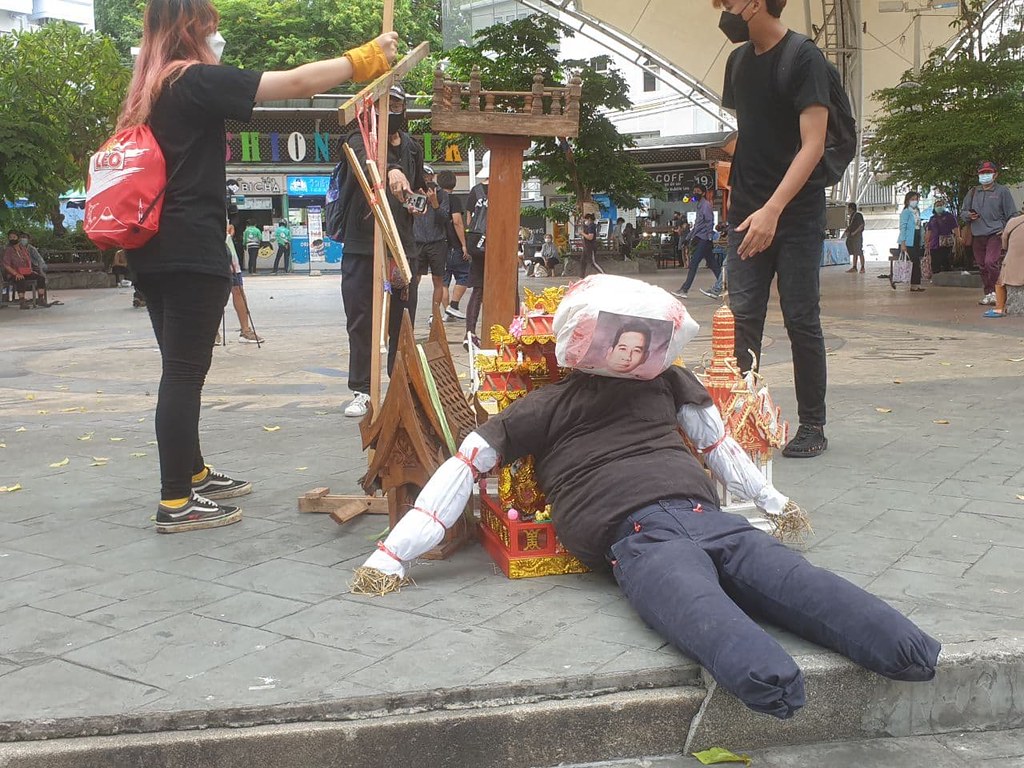 An effigy of judge Chanathip Muanwapong was placed on the footpath where the protesters were gathering, before being taken out onto the street to be burned.

The group planned to march to the Infantry Regiment headquarters, where Prime Minister Gen Prayut Chan-o-cha lives in free army housing despite being retired, to protest against the government’s mishandling of the pandemic, the use of violence against dissenters, arbitrary arrest, and the unfair judicial process.

Several speakers took turn giving speeches as the crowd began gathering at the Victory Monument ahead of the march at 16.00. During the speeches, they repeated that the protest will be nonviolent and that they will use only symbolic actions.

At 15.45, the protesters gathered on the street to burn spirit houses, the Thai word for which is the same as the word for ‘court,’ as well as an effigy of judge Chanathip Muanpawong, who previously denied bail to several pro-democracy activists detained pending trial earlier this year.

Chanathip also sentenced Ampon Tangnoppakul, or “Uncle SMS,” to 20 years in prison on a royal defamation charge under Section 112 in 2011, after Ampon was accused of sending messages to Somkiat Krongwattanasuk, who was at the time the secretary of then Prime Minister Abhisit Vejjajiva, which were deemed offensive to the King and Queen. 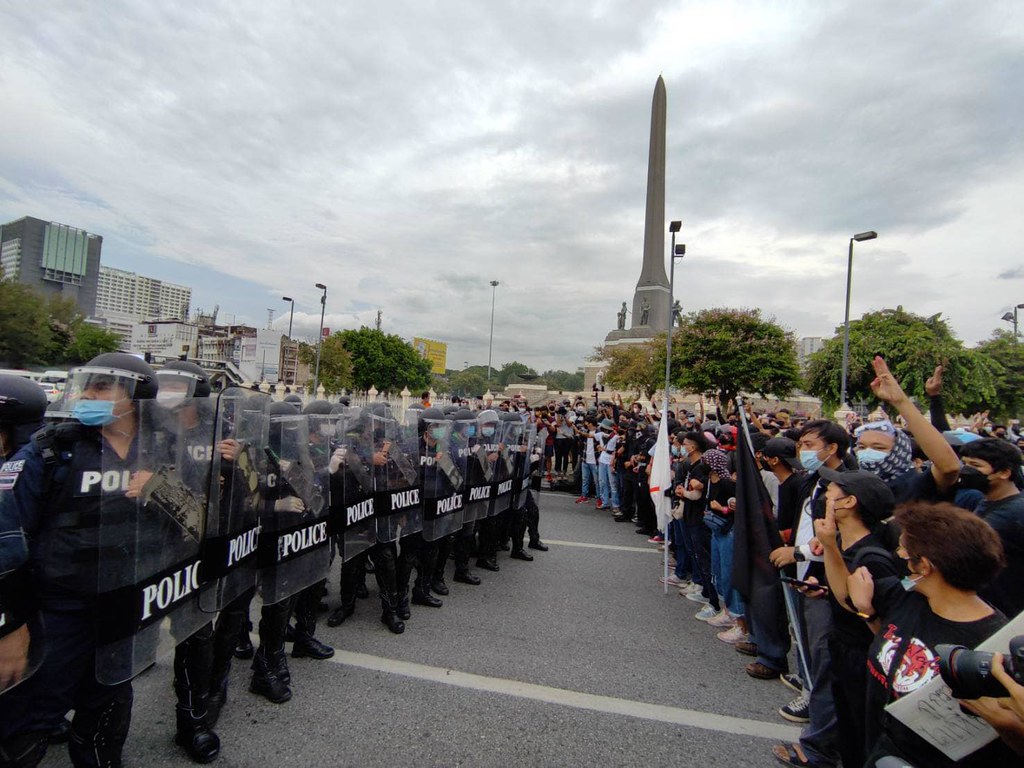 Around five minutes later, crowd control police lined up and moved towards the protesters, who linked arms and flashed the three-finger ‘Hunger Games’ salute as they faced the police. Several people also threw paint at the officers.

Another unit of crowd control police then surrounded the protesters and chased them onto the footpath next to the roundabout. Tear gas and rubber bullets were also used.

At 15.55, Thalufah announced on their Facebook page that they had called off the march due to police violence. In another post, they asked protesters to leave the area through the street next to the Center One Shopping Mall.

A protester told Voice TV on their live broadcast that she had been shot in the stomach with a rubber bullet. She was seen showing her injuries and the bullet casing to nearby reporters. More rubber bullet casings were also found around the Victory Monument. 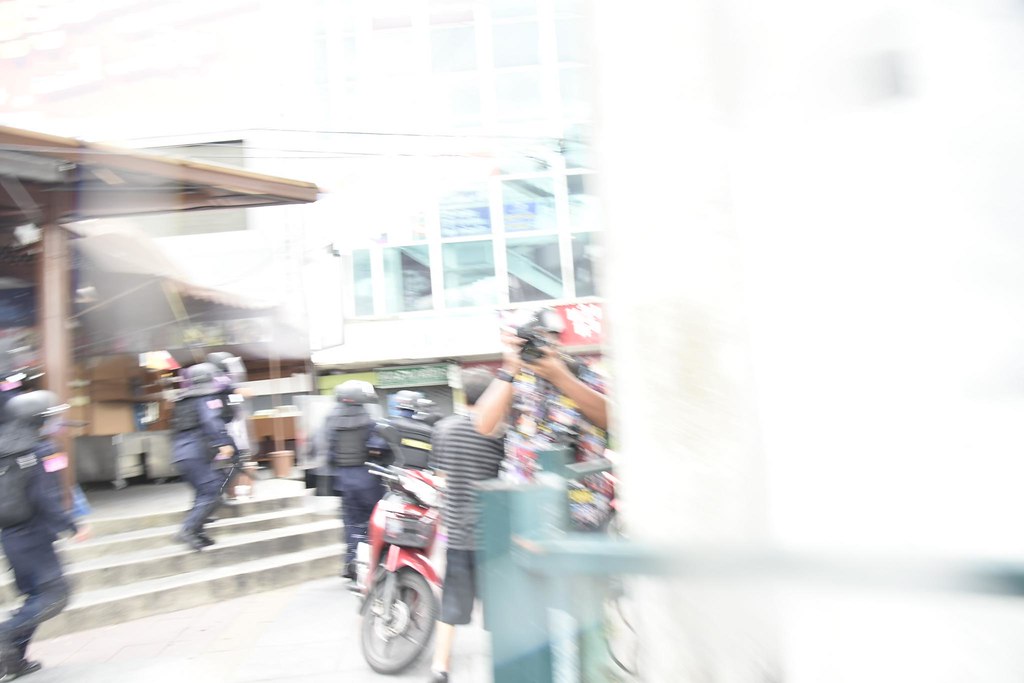 Meanwhile, independent photographer Laila Tahe said that a crowd control officer hit her with a baton while she is photographing them as they walk past to arrest protesters who ran into a nearby alley. The baton hit her camera, breaking her lens filter. The end of the baton also hit her shoulder, but Laila said she was not injured. She also said that the officer gave no warning before hitting her.

Nevertheless, Laila said she is not afraid and will continue to photograph protests. 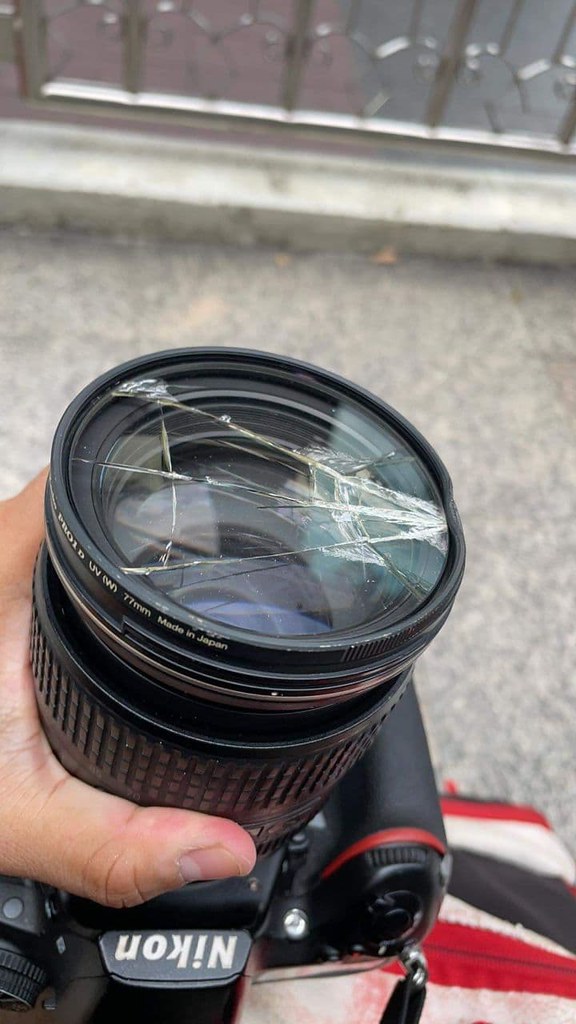 The damage to Laila's camera

After the protesters at the Victory Monument were dispersed, groups of protesters still headed to Vibhavadi Rangsit Road. However, they found that the Din Daeng intersection was blocked with rows of containers while crowd control police were stationed on the Din Daeng Highway.

Tear gas and rubber bullets were continuously fired at the protesters gathered on the street amidst heavy rain until around 19.00 when the protesters retreated towards the Victory Monument, where crowd control police deployed tear gas and water cannon trucks against them. 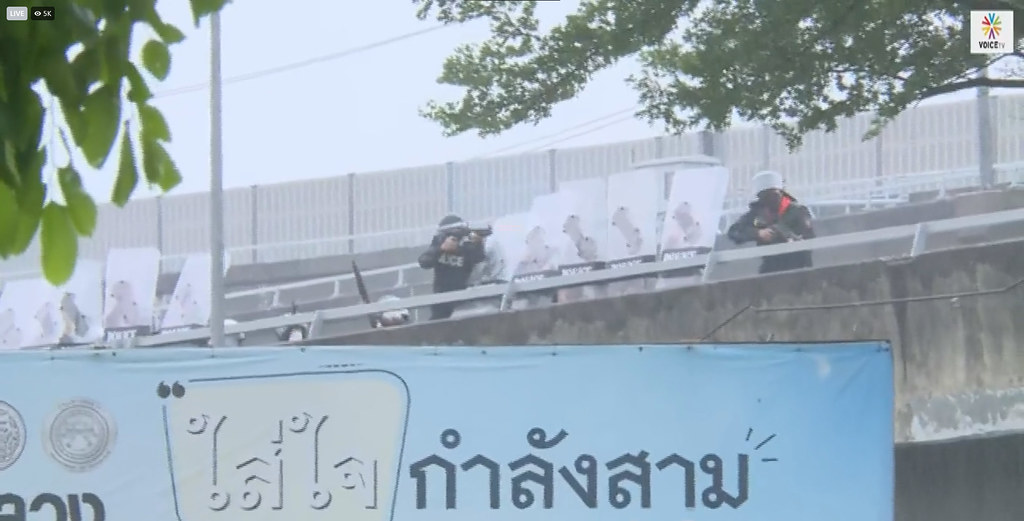 The clashes ended at around 20.00. Thai Lawyers for Human Rights (TLHR) reported that at least 17 people have been arrested, including Worawan “Aunty Pao” Sae-aung, an elderly fruit vendor known at protests for her outspokenness and sharp tongue. TLHR also said that 1 of the arrested protesters is a minor.

The protesters are currently being detained at the Narcotics Suppression Bureau. TLHR said that it is likely that they will have to spend 2 nights in police custody before being taken to court on Friday (13 August), as Thursday (12 August) is a public holiday.