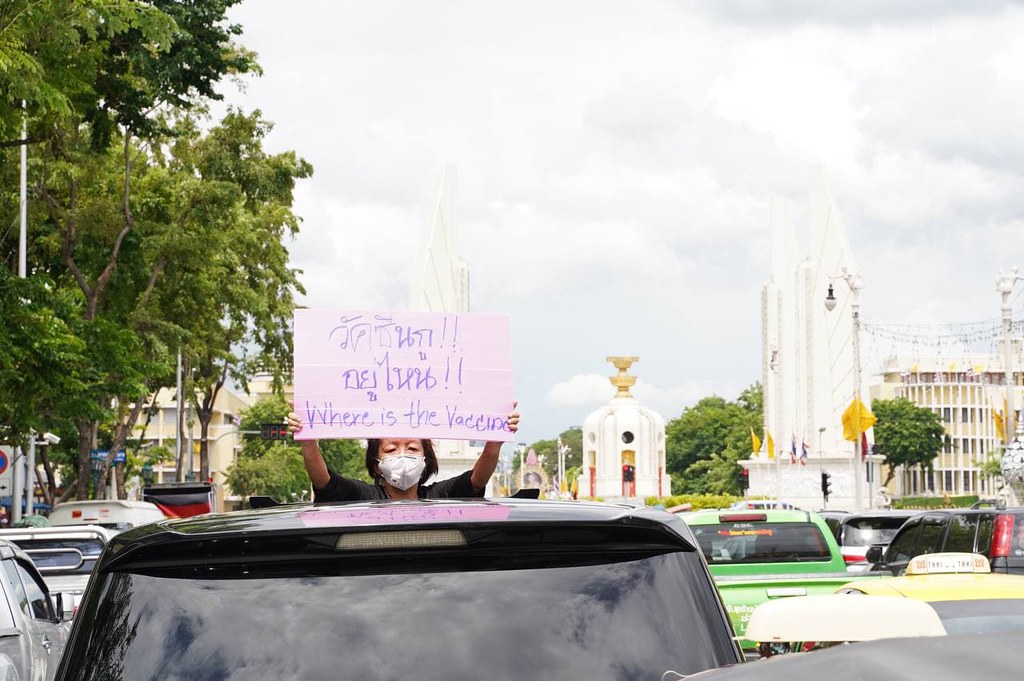 The protest started at 14.00 at the Democracy Monument. By 13.50, cars and motorcycles had filled the roundabout around the Monument ahead of the march to Government House. To reduce the risk of Covid-19 infection, protesters set up disinfection booths, while volunteers handed out masks, rubber gloves, raincoats, and face shields to participants.

The march was organized by Free Youth and its partner organizations to protest the government’s mishandling of the Covid-19 pandemic. They have made three demands: the resignation of Prime Minister Gen Prayut Chan-o-cha, the reduction of the budget for the monarchy and military to be reallocated to Covid-19 assistance, and to have the Sinovac Covid-19 vaccine replaced with mRNA vaccines. 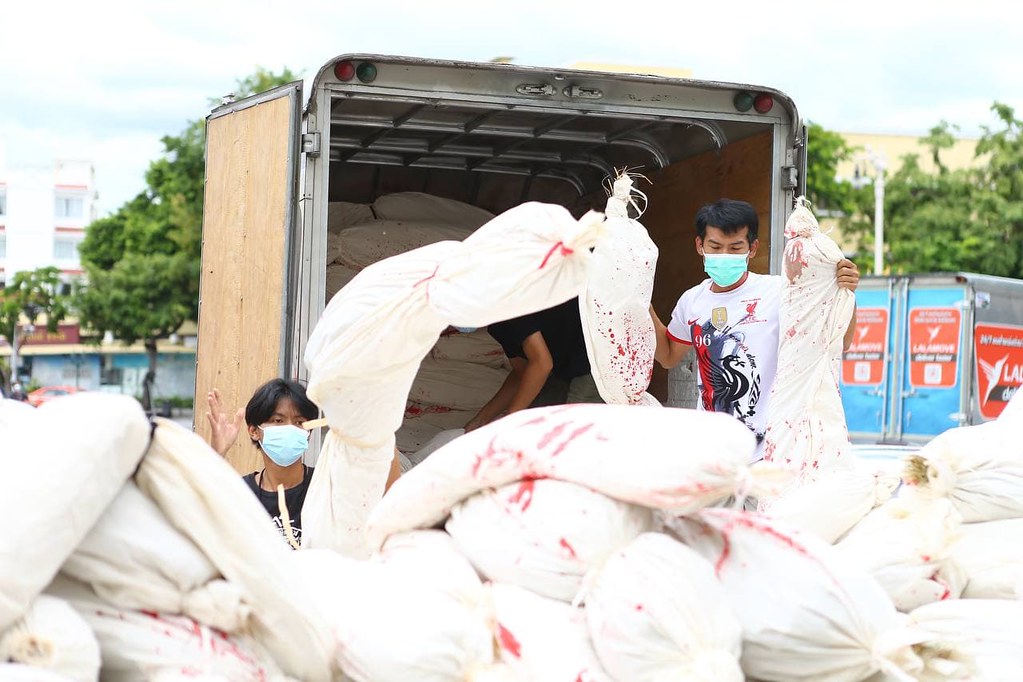 Mock body bags were piled up in front of the McDonald’s next to the Democracy Monument. The number reportedly equalled that of people who have died from Covid-19. They were also carried by protesters during the march.

Ahead of the protest, the Chamai Maruchet Bridge was blocked by containers, while water cannon trucks were stationed around Government House. There were also reports of crowd control police lining up at the Wat Benchamabophit intersection, while the road leading to the Panitchayakan intersection was closed.

Crowd control police, along with 2 speaker trucks and 1 water cannon truck, were also seen stationed at the Phan Fa Lilat Bridge, which was also blocked with razor wire.

At 13.00, police officers from Samranrat and Chana Songkhram police stations read out the order under the Emergency Decree banning gatherings or any activity which risked spreading the Covid-19 virus. 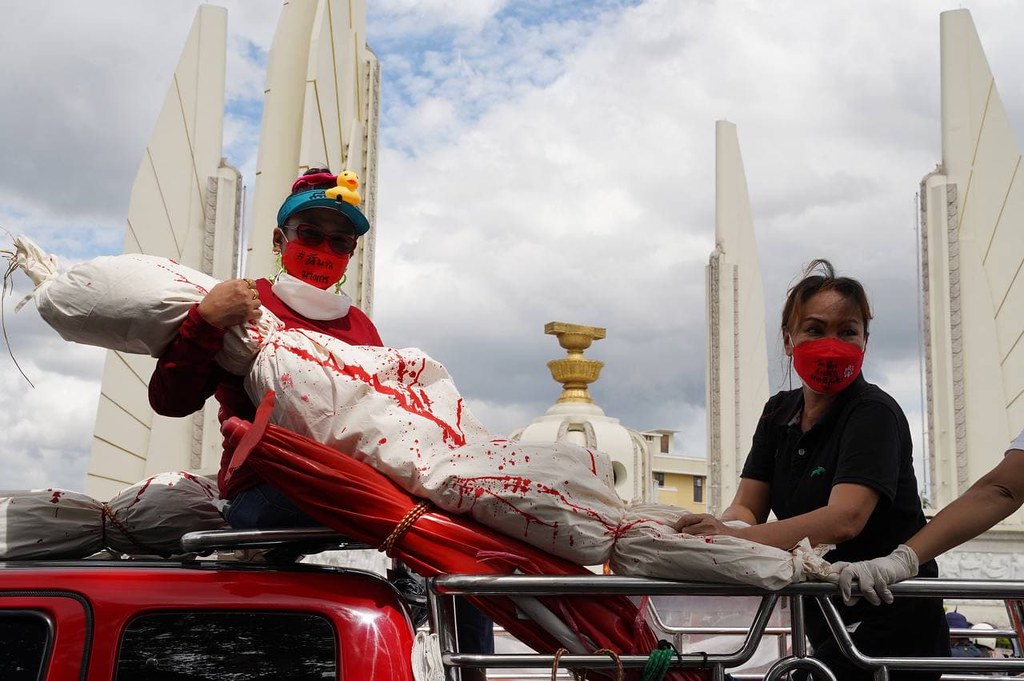 At around 15.10, after a brief bout of rain, protesters began marching to Government House. Protesters marching on foot headed the procession, followed by motorcycles and cars. After around 20 minutes, they reached the Phan Fa Lilat intersection, which was blocked by razor wire and a unit of crowd control police. 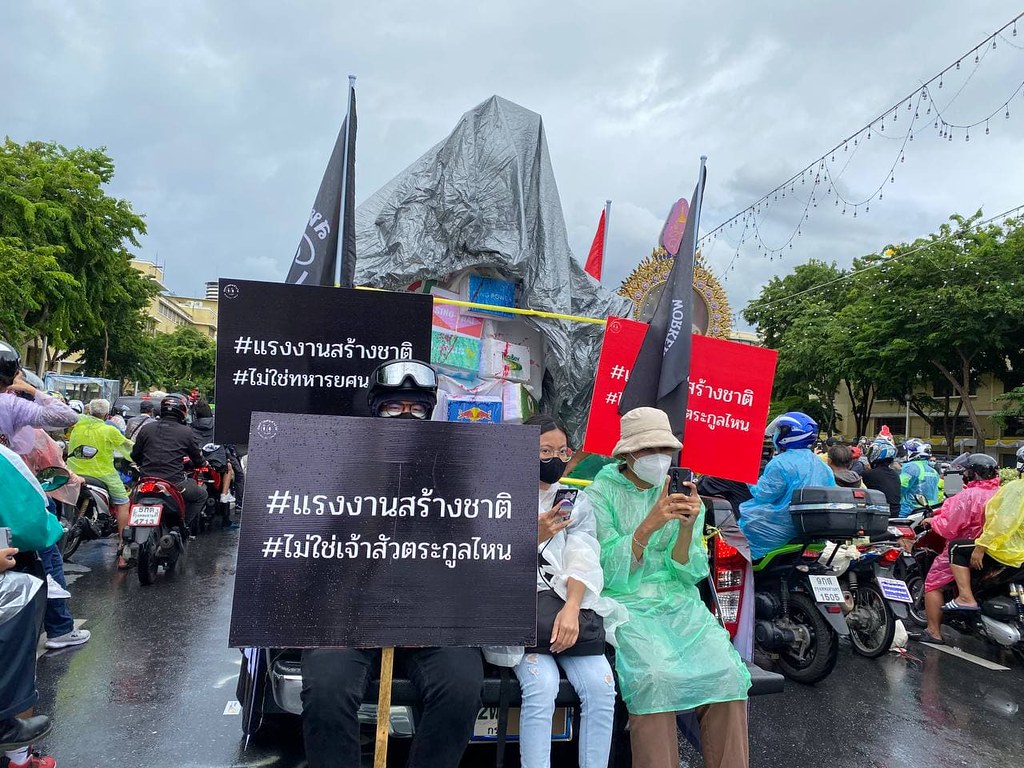 At around 16.10, the police began firing rubber bullets at the protesters. iLaw also reported that the police were ordered to add tear gas to the water in the water cannon trucks. A Prachatai reporter at the scene said that he felt some irritation in his eyes, possibly due to the chemical in the water.

Around 5 minutes later, the protesters changed their route, heading instead towards Nakhon Sawan Road. At 16.30, they arrived at Phitsanulok Road near Rachawinit School, but were blocked by units of crowd control police. They were hit with blasts from water cannon reportedly mixed with chemical irritants. 2 detention trucks, 2 water cannon trucks, and 4 police vans were also seen parked at the Panitchayakan intersection.

The police also continuously fired tear gas at the protesters. At 17.05, The Reporters’ field reporter said on their livestream feed that they also felt extreme irritation in their throat and eyes despite wearing protective gear and could not stay close to the frontline. Several people were also reportedly injured. It is unclear how many people were injured during the clash. 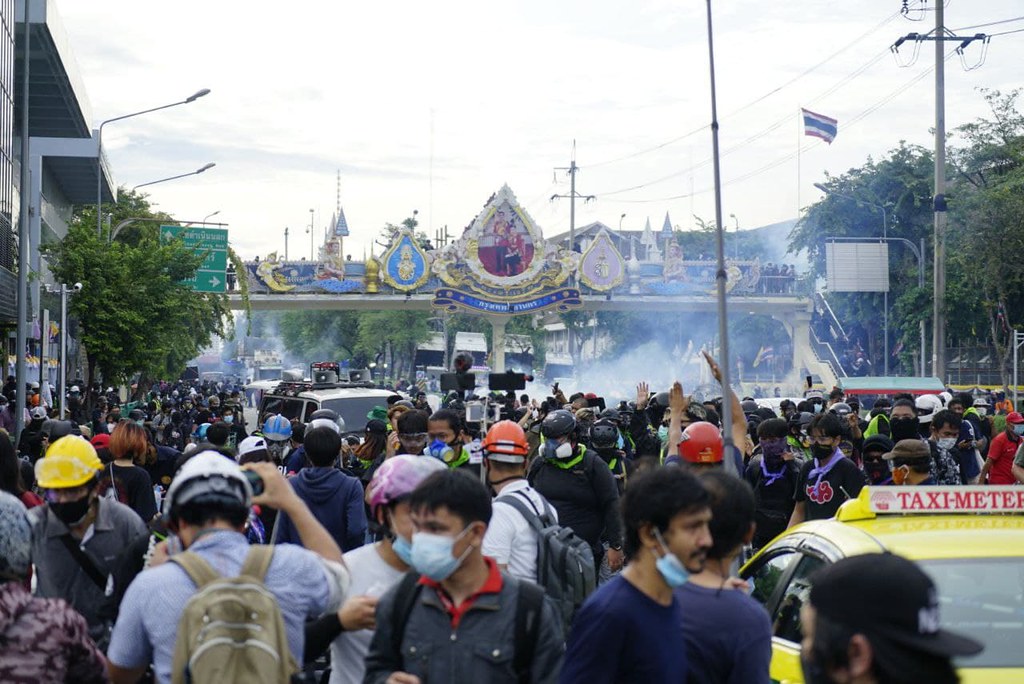 White tear gas smoke ahead of protesters on Pitsanulok Road

The clash lasted until 18.00, when the protesters retreated to the Nang Loeng intersection. They burned the mock body bags and an effigy of Gen Prayut. A model of a guillotine was also placed near the bonfire.

Free Youth announced the conclusion of the protest at 18.30. However, protesters continued to gather around the area. Some burned effigies at the Thewakam intersection and threw objects at the crowd control police stationed there. Firecracker-like sounds were also heard from Krung Kasem Road. 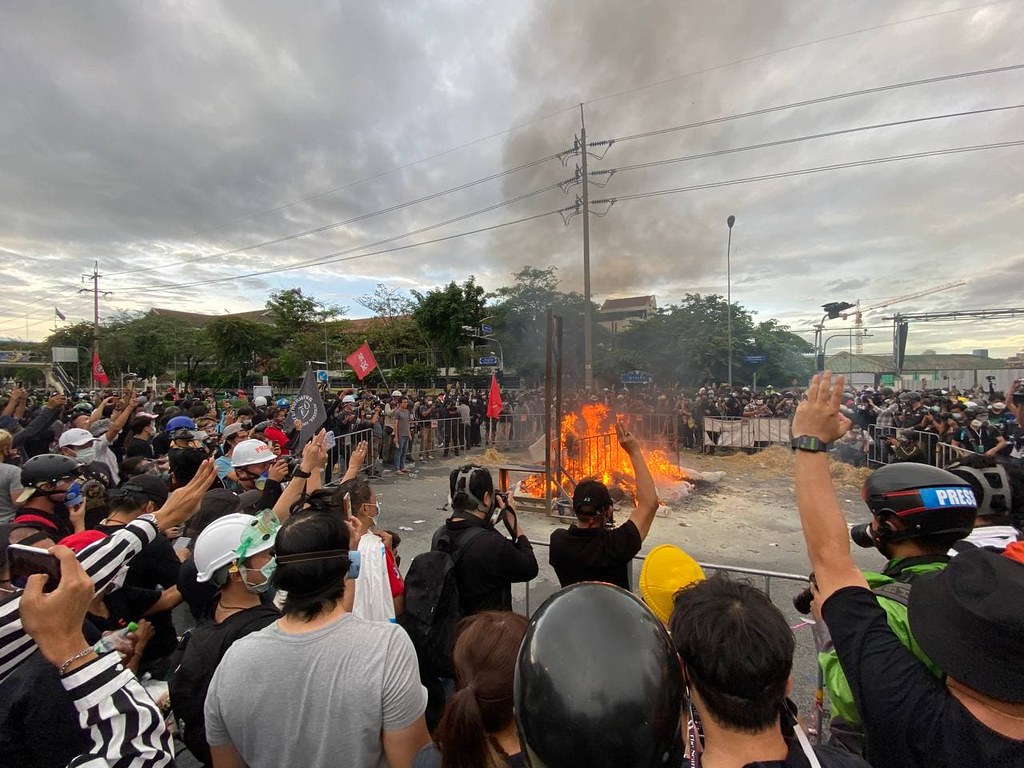 At 18.50, police officers stationed near Wat Sommanat announced that the protest had ended and participants should leave. Tear gas was then fired towards the Thewakam intersection. 10 minutes later, crowd control police moved in to push the protesters out of the area and force them to leave before the 21.00 curfew. There were also reports of police firing rubber bullets and tear gas into areas where protesters were gathering.

Three reporters were injured with rubber bullets while covering the protest, despite wearing visible press IDs: Thanapong Kengpaiboon from Plus Seven, Peerapong Pongnak from Matichon TV, and a photographer from The Matter whose name is withheld. The police did not issue warnings before using rubber bullets.

Thai Lawyers for Human Rights (TLHR) reported that activist Thanadet Srisongkhram was arrested on a warrant issued by the Nonthaburi Provincial Court relating to the protest in front of the Ministry of Public Health on Friday (16 July). 11 other protesters were also later arrested after they travelled with Thanadet to Bangkhen Police Station. According to TLHR, the police arrested them because they were seen at the protest. However, the police did not present an arrest warrant. Among those arrested were 4 minors, and all were expected to be taken to the Border Patrol Police Region 1 headquarters.

18 July was also the anniversary of the mass protest at the Democracy Monument in 2020, which called for the dissolution of parliament and constitutional amendments, and for the authorities to stop harassing citizens exercising freedom of expression. That protest was attended by around 2000 people, and is regarded as the protest which kickstarted the pro-democracy movement.

According to iLaw, there have been 1,359 protests during the past year, while the authorities have used force to disperse 16. The reasons given for the use of force to break up the protests have included violation of the Emergency Decree or the risk of spreading Covid-19, entering an area surrounding royal land or a passing royal motorcade, breaking through police blockades, overrunning the scheduled protest period given to the police, blocking traffic, and not notifying the authorities of the protest. Some crackdowns took place without a clear reason. 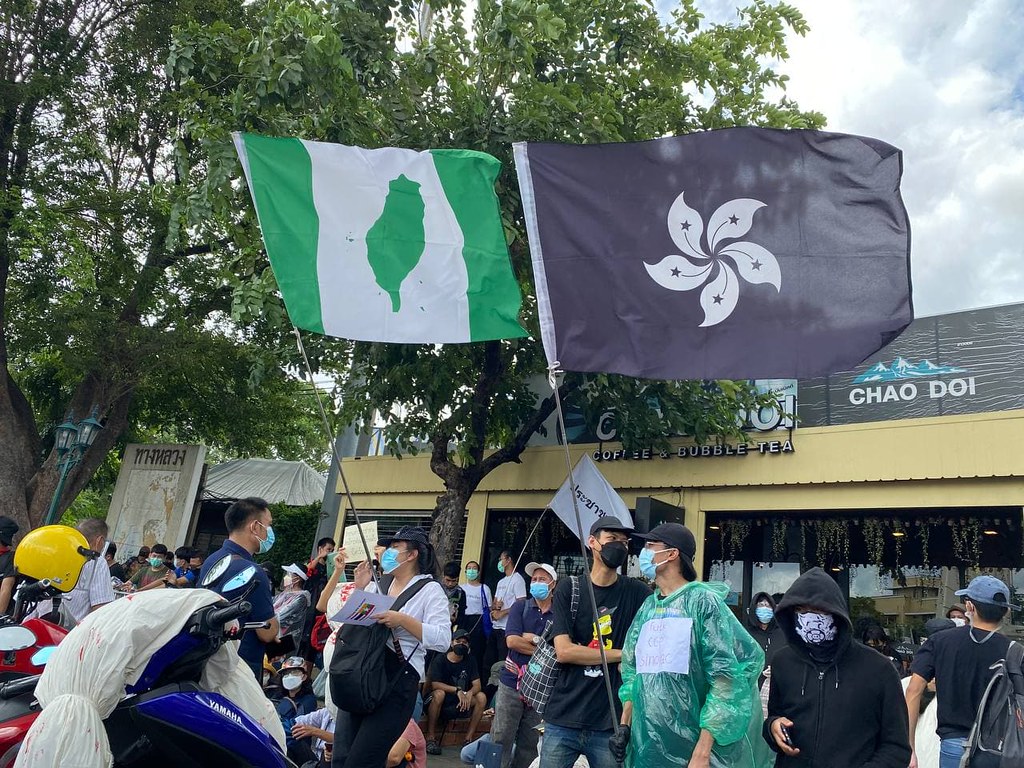 Rattasart Plianwong joined the protest carrying the Black Bauhinia flag of the Hong Kong pro-democracy movement and the flag of the World Taiwanese Congress.

“Right now we see that Sinovac cannot prevent anything, and scientific experiments show that Pfizer and Moderna are more effective,” he said.

Rattasart said that he has just graduated with a degree in political science and now works in marketing. He is paid a salary of 13,000 baht, with additional incentives and overtime. However, since the lockdown, he has a salary of 15,000 with no perks, and has had to pay for his own Covid-19 testing several times.

“The government has to bring in good vaccines and give it to everyone for free, so the economy can move forward,” Rattasart said. 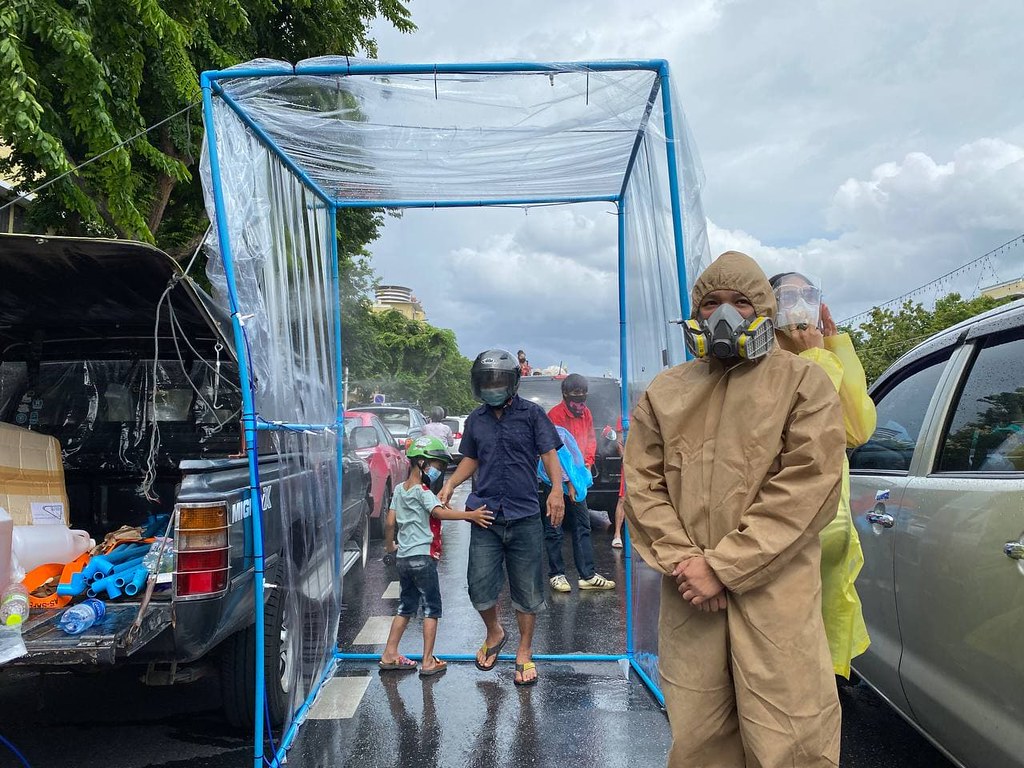 Bank and his disinfection booth

Bank (pseudonym), 31, came to the protest with a DIY disinfection booth made from PVC tubes, which he used to spray disinfectant for protesters.

Bank said that he is a volunteer working in the Khlong Toei community, where the outbreak of Covid-19 has been severe. He said that there are at least 10,000 people with Covid-19 in the community.

"Right now, the state’s management is completely ineffective. Mostly, the people have come together and helped each other, like the screening points for people going to field hospitals,” he said.

He would like the government to allocate budget to have officials help them, or at least give them information on what to do.