On the occasion of the International Day Against Homophobia, Transphobia, and Biphobia (IDAHOT), gender equality and LGBTQ rights activist groups Queer Riot, Feminist’s Liberation Front, Togetherness for Equality and Action (TEA), Secure Ranger, and Free Queer & Non-binary organised a candlelight vigil at the Pathumwan Skywalk and the Bangkok Art and Culture Centre (BACC) to raise awareness about discrimination against the LGBTQ community.

The event also raised awareness about the hardship faced by LGBTQ people during the Covid-19 pandemic. The organizers said in a statement released before the event that the pandemic has worsened discrimination against LGBTQ people, especially young people, many of whom spent the lockdown with families who do not accept their identity.

Many trans and non-binary people also face unfriendly treatment from hospitals which follow the binary conception of gender. Sex workers, particularly trans people, and nightlife establishment employees lost their jobs due to the government order closing down their workplace.

Meanwhile, the marriage equality bill, which should be going before parliament for consideration, has been delayed, and it is currently unclear when the bill will be considered.

Due to the new outbreak of Covid-19 in Thailand, the small group of participants kept a distance from each other and wore masks throughout the entire event. The event was also broadcast on Zoom, so that members of the public could join the virtual vigil.

After the event, a monk named Shine Wara Dhammo, who participated in the event, was taken to Pathumwan Police Station. He was initially stopped by police officers while walking to the Ratchathewi BTS Station. The officers claimed they were notified that a monk had joined the activity at the BACC and were asked to verify whether the person really was a monk. They asked to see Wara Dhammo’s certification as a monk, but he did not have it with him and instead presented his citizen ID card. The officers then insisted on taking him to Pathumwan Police Station. He was later released after they were able to verify his certification. 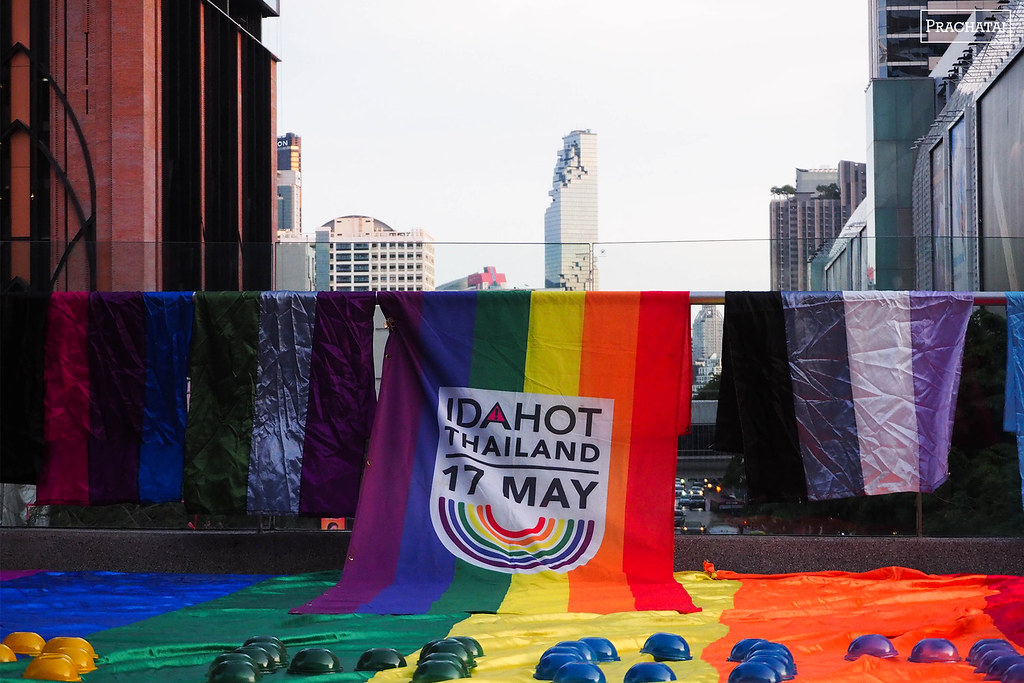 LGBTQ pride flags hanging from the railing around the Pathumwan Skywalk 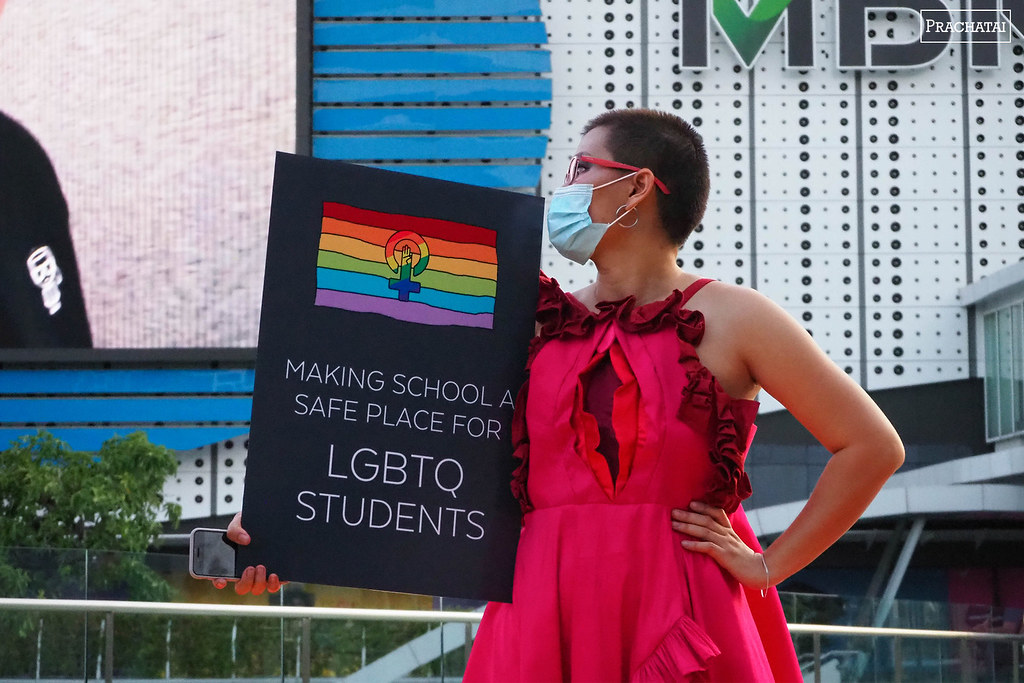 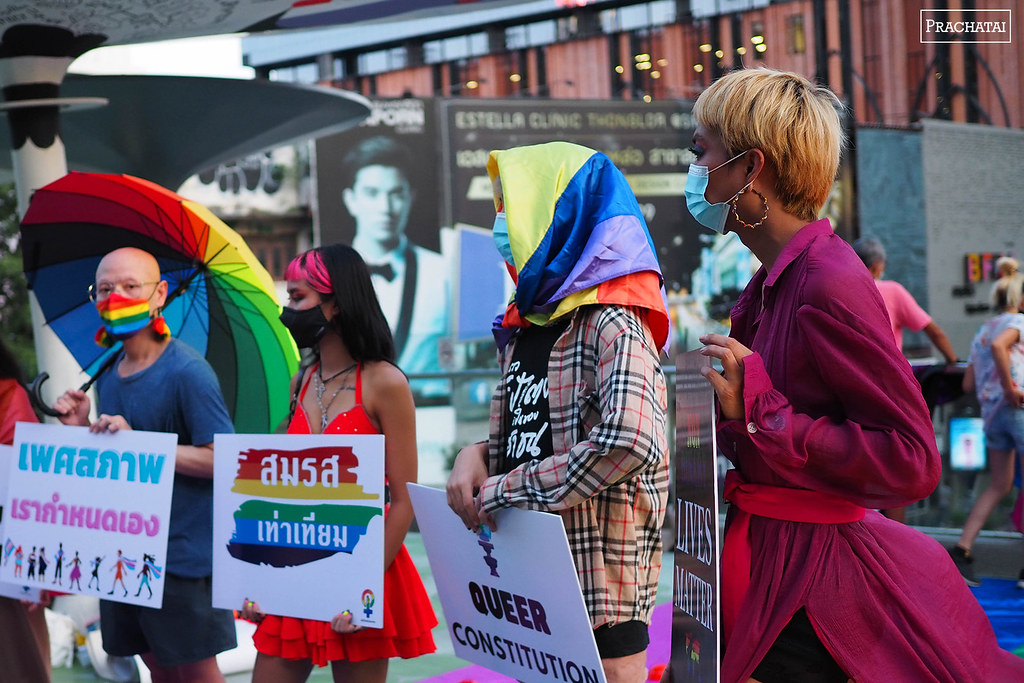 The participants, carrying campaign signs, standing on the Pathumwan Skywalk. The two signs on the left say "we determine our own gender" and "marriage equality". 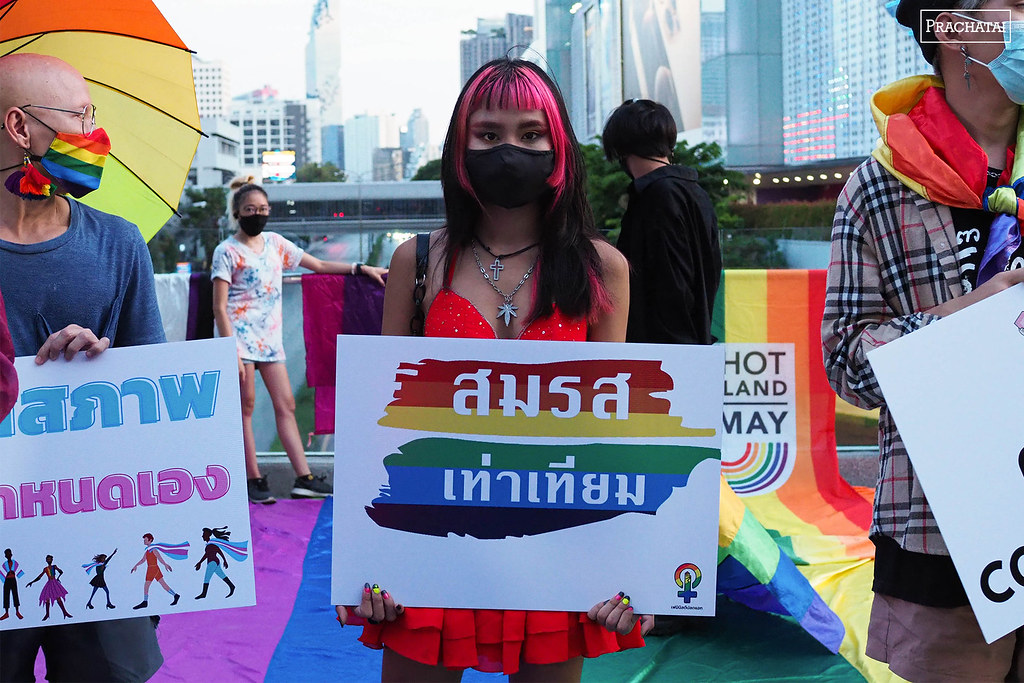 A participant holding a sign saying "marriage equality" while standing on a large pride flag placed on the Pathumwan Skywalk. 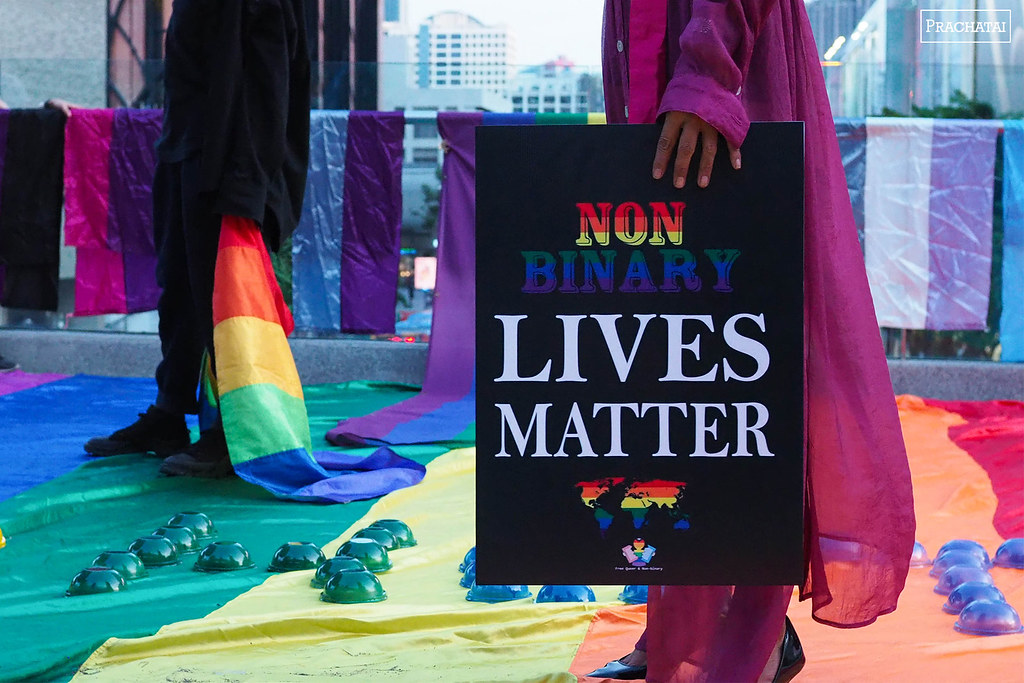 Another participant is holding a "Non-binary lives matter" sign while standing on the pride flag. 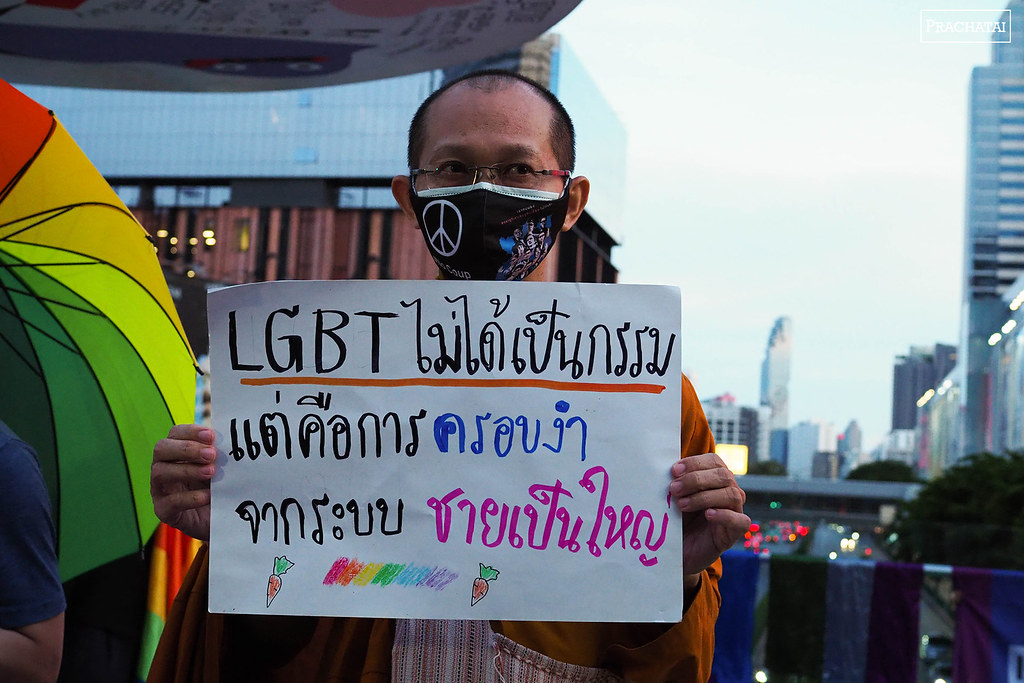 Shine Wara Dhammo holding a sign saying "LGBT is not karma, but it is domination from the patriarchy." 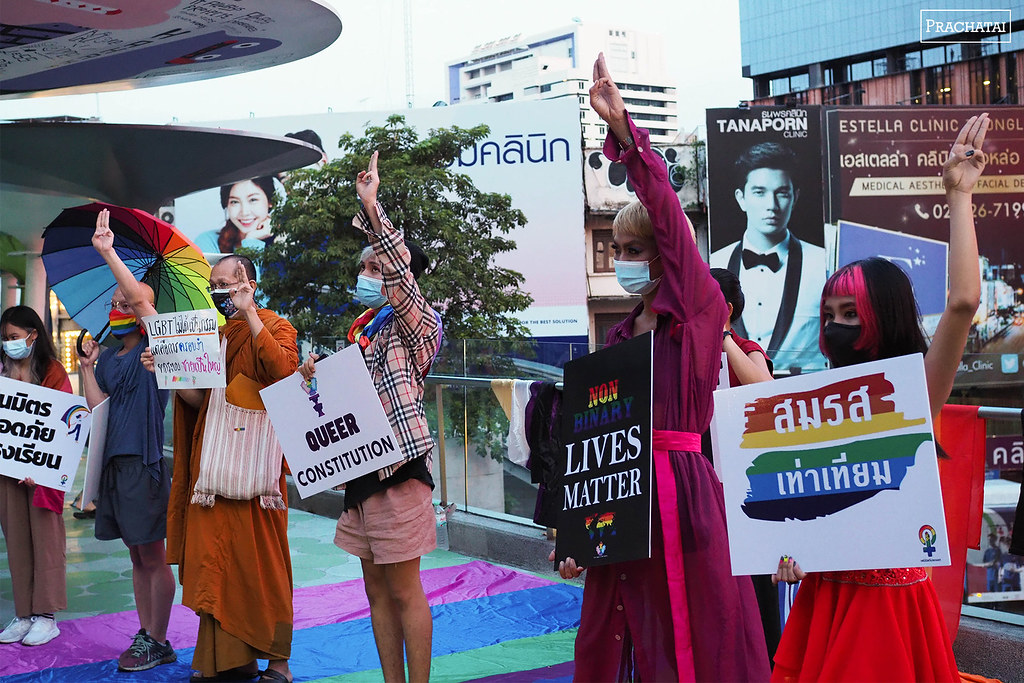 Participants flashing the three-finger 'Hunger Games' salute, a popular symbol of resistance seen at protests in Thailand, while standing on the Pathumwan Skywalk. 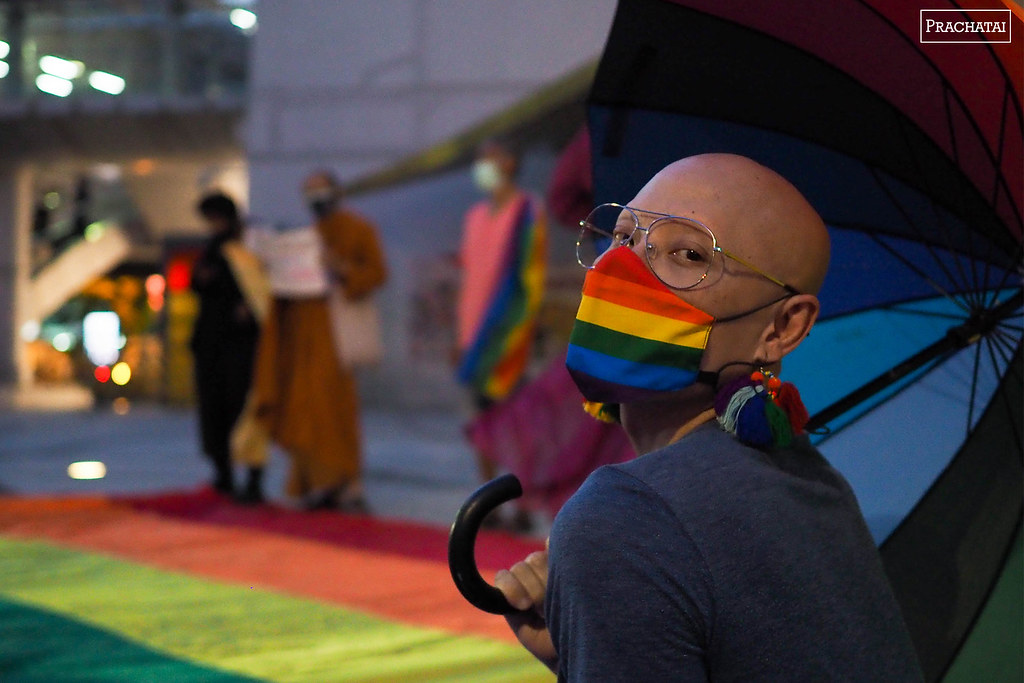 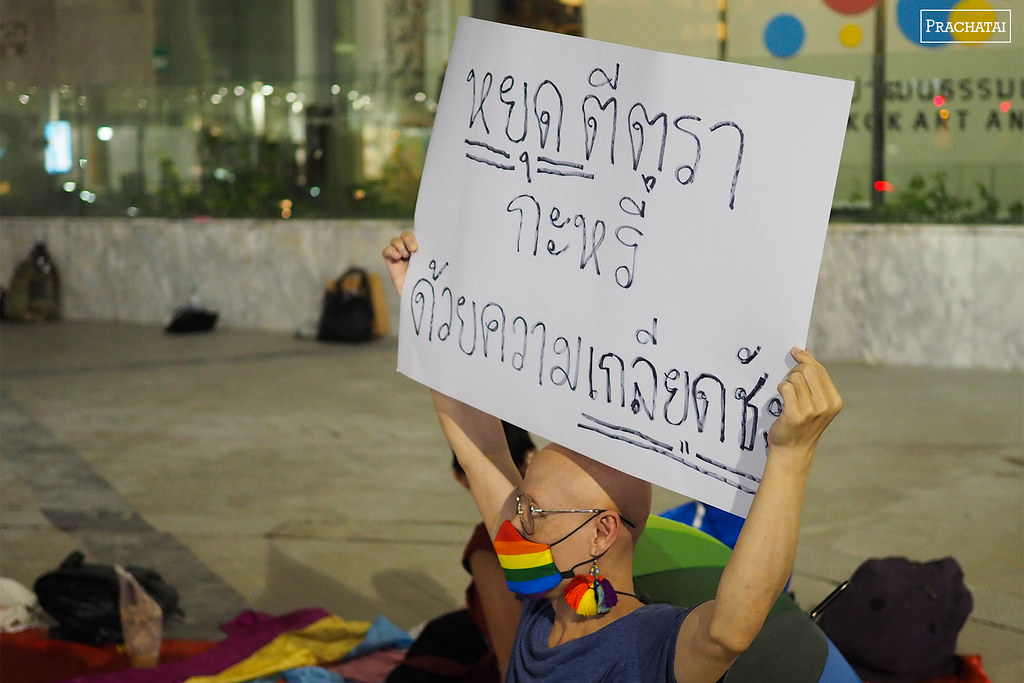 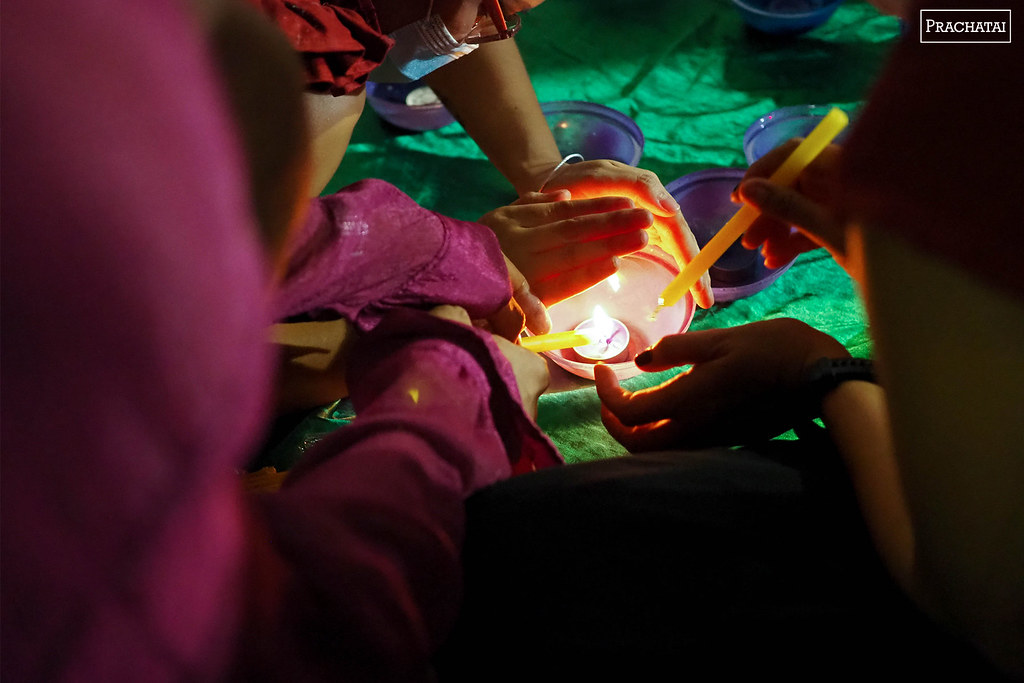 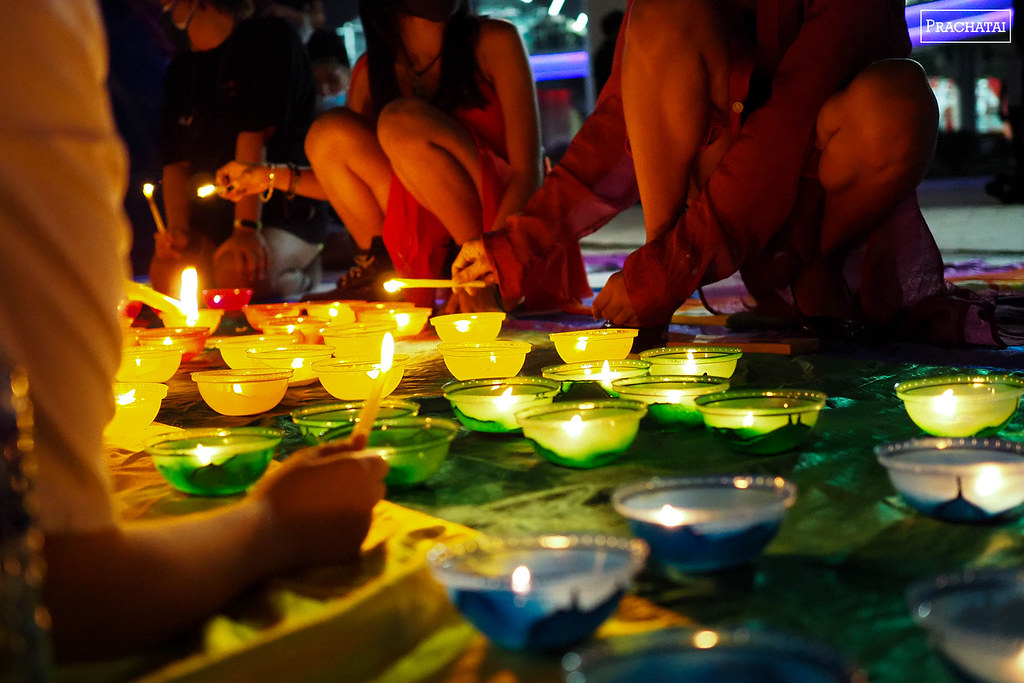 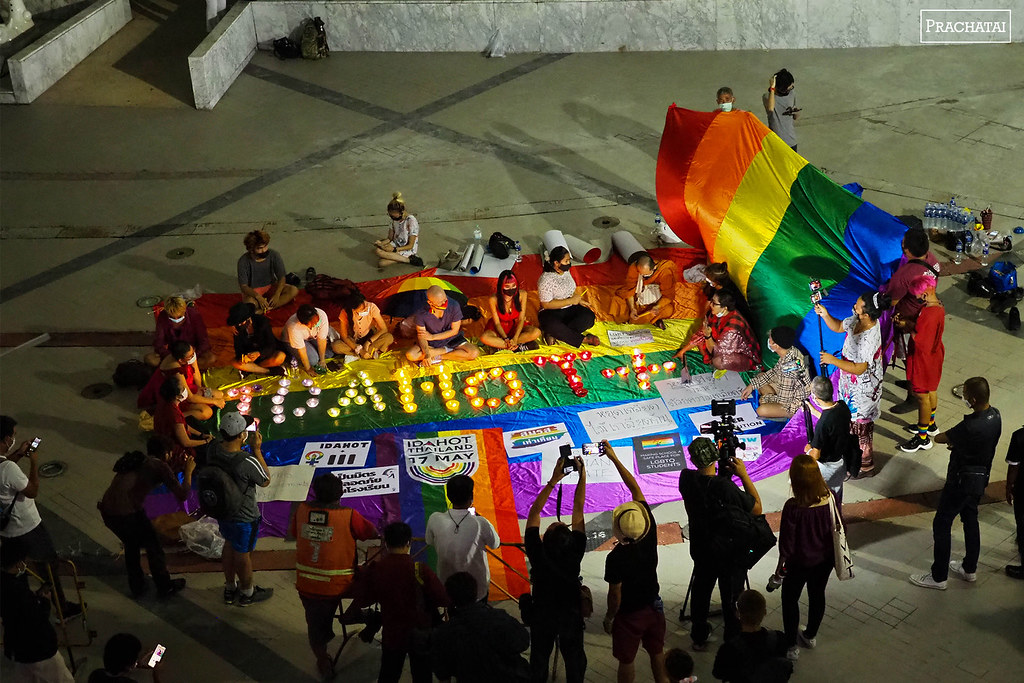