Hundreds of scholars from universities across North America, Europe and Asia are sending letters of appeal to high-level administrators at Chulalongkorn University (CU) asking them to defend academic freedom and stop the attack on Dr Nattapoll Chaiching. 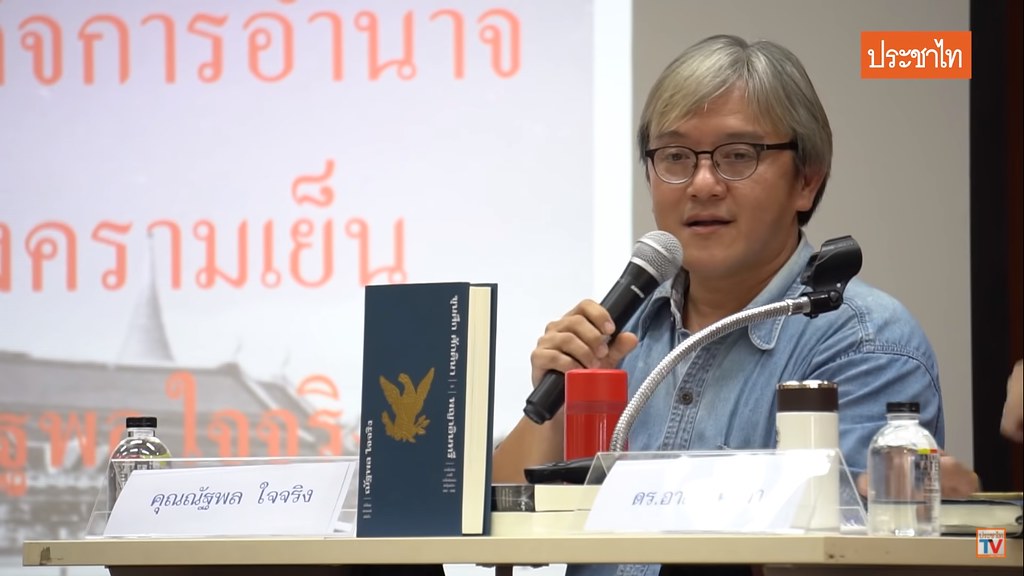 Dr Nattapoll presenting his book "Warlords, Feudals and the Great Eagle", a work which was made from his targeted dissertation.

Dr Nattapoll Chaiching, who received his PhD in 2009 from the Faculty of Political Science at CU and is now a faculty member at Suan Sunandha Ratchabhat University, is being investigated by CU as a result of an innocent and minor mistake made in his dissertation at the behest of some academics who alleged that it was a fabrication of evidence that affects the reputation of the monarchy. Given the politicized place of the monarchy in the Thai polity, the investigation into Dr Nattapoll for a mistake in his dissertation is the instigation of a witch-hunt, rather than the safeguarding of principles of academic integrity.

Writing to Professor Bundhit Eua-arporn, CU President, Professor Parichart Sthapitanonda, Vice President for Academic Affairs and Social Outreach, and Professor Chakkaphan Sutthirat, Vice President for Research Affairs, the scholars called on them to cease the investigation into Dr Nattapoll, make his Ph.D. dissertation available to the public, since an open discussion, not censorship, is the best way to guarantee academic integrity in this case. The scholars also called on them to put in place policies that will enable that will provide protection to students and faculty to take the intellectual risks necessary to complete creative and ground-breaking work.

In their letters, the scholars explained that without protection of scholars against attacks, the university itself will be damaged. This will be felt in a the impoverishment of debate in the classroom, the dull theses produced to stay safe from possible attack, and lifeless scholarship that remains solely within the frameworks of debate amenable to those in power. But the cost of producing only a narrow scholarship amenable to those in power is a decline in excellence, which will may ultimately be reflected in the international rankings so essential to the survival of all universities today, including Chulalongkorn University.

Leading international scholars offered the following comments about the investigation and campaign:

Dr Jeffrey Wasserstrom, Chancellor's Professor of History, University of California, Irvine: “This is a moment when academic freedom is under assault in many parts of Asia (and indeed the world as a whole) at a time when it has never been more important for universities to be places where free inquiry can be carried out on issues related to such topics as international relations and political systems… It has thus been deeply concerning to me to learn of the varied methods now being used to try to silence a well regarded Thai scholar of these topics--efforts that are focusing largely on a small mistake of detail that he made early in his career, which he has gone on to acknowledge and try to correct.”

Dr Ben Kiernan, A. Whitney Griswold Professor of History at Yale University: “In withholding any public access to the PhD dissertation…Chulalongkorn University is now engaging in academic persecution that deserves rigorous condemnation by the global scholarly community.”

Dr Jim Glassman, Professor of Geography at the University of British Columbia: “Freedom of speech and academic research are barometer indicating the degree to which a society and its major institutions are healthy or unhealthy. In strong and healthy societies, these basic freedoms reinforce society’s overall health, and where scholars… make mistakes—as they inevitably sometimes will—those mistakes are corrected through free and open discussion. A society in which honest scholarly mistakes are corrected… through draconian punishment reveals itself not to be strong in the defense of its institutions but frail and marred by declining health. Thailand is currently at a crossroads, where the decisions made by leading policy-makers and intellectuals about freedom of speech and intellectual inquiry will reveal—and perhaps help determine—whether or not the country and its institutions will have a healthy future or are instead headed toward greater illness and eventual demise.”

Katherine A. Bowie, Vilas Distinguished Achievement Professor of Anthropology, University of Wisconsin-Madison, former President (2017-2018) of the Association for Asian Studies: "By failing to make a straightforward defense of academic freedom, Chulalongkorn University risks the danger of appearing to allow itself to become a party to the broader partisan politics that is threatening to beset Thailand at present... Universities play important roles in ensuring a civil space for rigorous dissent and debate that is important for broader society. Failure to defend academic freedom not only leads to the impoverishment of debate on campus, but also to the inability to nurture a new generation of dynamic, innovative leadership."

Dr Andrew J. Nathan, Class of 1919 Professor of Political Science at Columbia University, appealed to the CU administrators to set an example for their colleagues around the world: “This is an issue of international concern, because what can happen to a scholar today in Thailand today can happen to me in the United States tomorrow. I therefore personally request that you, as academic leaders, take the necessary steps to protect Dr Nattapoll Chaiching from persecution... Your doing so will offer great encouragement to all scholars around the world.”

The organizers of the campaign, Dr Thongchai Winichakul, Emeritus Professor of History at the University of Wisconsin-Madison, and Dr Tyrell Haberkorn, Professor of Asian Languages and Cultures at the University of Wisconsin-Madison, believe it is important to stand with colleagues in Thailand because the role of the university is to serve as a beacon of free exchange and a space for rigorous dissent and debate. This is important both for the broader Thai society of which the university is a part, as well as to foster the atmosphere of critical and creative exchange necessary for academic excellence.