On 20 March, protesters gathered at Sanam Luang demanding that the power of the monarchy be limited under the constitution. The police responded by setting up a long barrier of containers. The people faced retaliation after removing the blockade. Rubber bullets, tear gas, and water cannon were deployed broadly and indiscriminately. 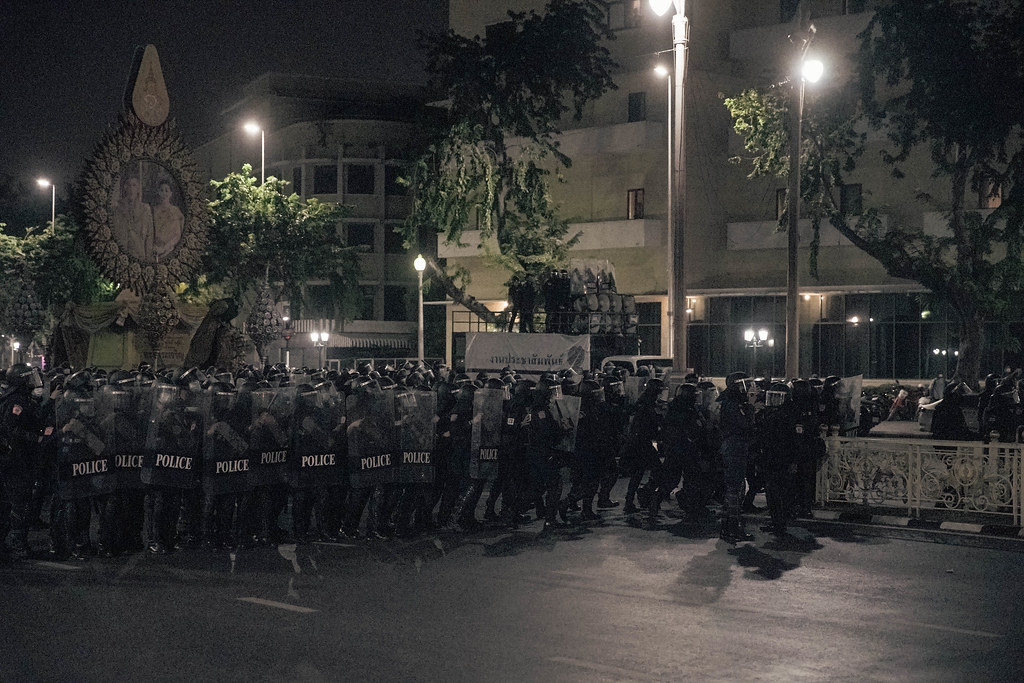 Crowd control police assembling in front of Rattanakosin Hotel before engaging the protesters.

As of Sunday morning, Thai Lawyers for Human Rights reported that 32 people were arrested. 30 people were taken to Border Patrol Police Region 1 headquarters in Pathum Thani for detention and investigation.

The Erawan Medical Centre reported on Sunday that 33 people were injured and transferred to hospital.

The protest was scheduled after a popular vote in the REDEM communication group. Protesters gathered at Sanam Luang at around 17.50 to face a long barrier of containers stacked two-high barring them from accessing the Grand Palace walls. The blockade was reportedly put in place at around 07.00 on Saturday. 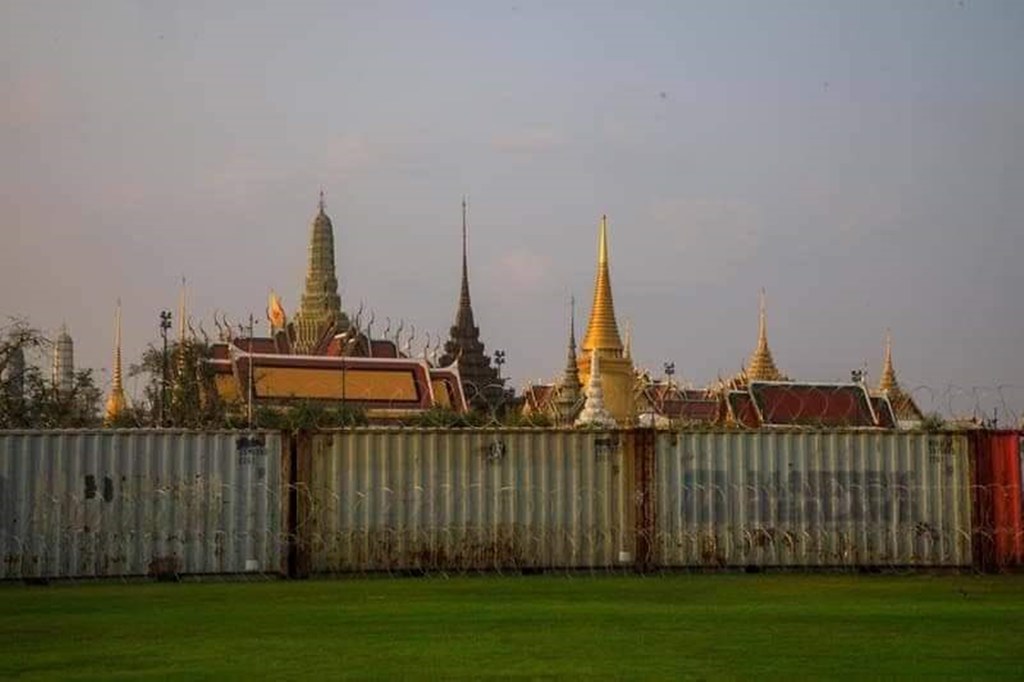 A long container barrier in front of the Royal Palace.

As more people arrived, some protesters were seen pulling down part of the wall of containers. At around 19.00 a path opened up after a row of containers was removed. Crowd control police behind the blockade began to warn the protesters not to cross the line otherwise they would be arrested.

At 19.02 water cannon opened fire from behind the blockade as the police were preparing arrest teams. 8 explosions were heard. The protesters retreated to Phan Phipop Lila Bridge before re-entering Sanam Luang, waving large white banners, only to face more water cannon fire. The water was reportedly infused with a tear gas agent. 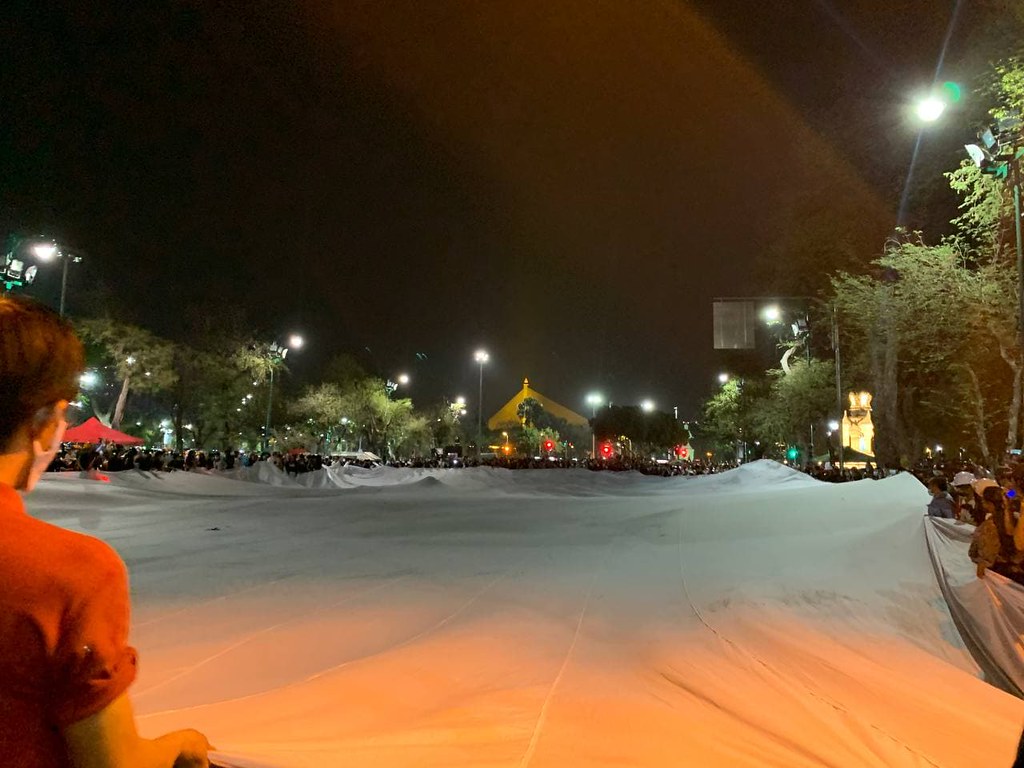 At around 19.30, the protesters were flanked by crowd control police who marched from Ratchadamnoen Road toward the protesters. The police on both sides then started forcibly dispersing protestors. Tear gas and rubber bullets were widely used at this stage as the protesters made a retreat to Phra Pinklao Bridge, the only major exit that remained open.

Doi, a 15-year-old young woman, was injured in the left chest by a rubber bullet. She said she was at the Mother Earth Statue across Sanam Luang when the police announced that they would arrest people who were lingering on the street. However, the police shot her after a couple seconds without allowing her to run. 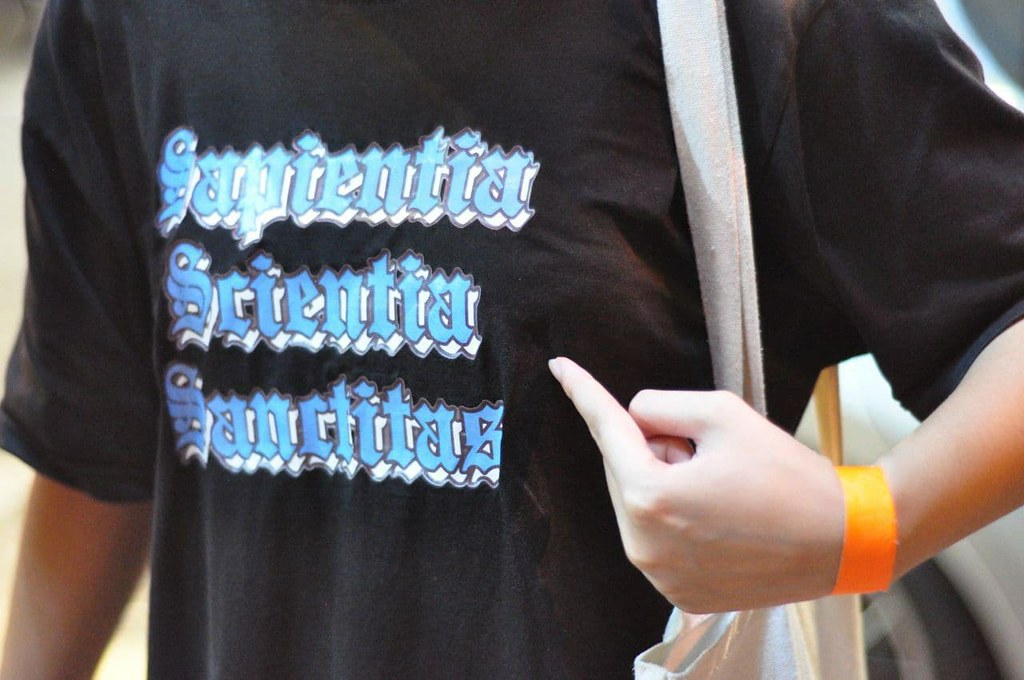 Doi pointing to where she was shot.

Doi said she was terrified and hurt. She said her family is not against her coming to the protest. However, getting hurt is not what she wanted as she was afraid of missing a test because of her injury.

The standoff at Phra Pinklao Bridge went on for around 1 hour. Tear gas and explosions were observed several times. The media around Ratchadamnoen Road were restricted in a designated area by the police.

At 20.43, crowd control police opened a path to Atsadang Road, allowing protesters to leave. Police asked the media to lead the people out of the area. Afraid of an ambush by a pro-monarchy vigilante group, the protesters urged the police to lead them out to a safe place. 2 units of police were deployed to lead the protesters out.

At 21.45, a person was attacked by an unidentified group of men around Wat Mahannapharam with some sort of flag pole. He was injured in the head and taken to hospital.

At 21.53, the Coalition of Salaya for Democracy posted on Facebook that a person was shot with live ammunition by unknown men around the Giant Swing.

At 22.24, Prachatai journalist Sarayut Tangprasert was shot in the back by a rubber bullet while livestreaming the crackdown at Kok Wua intersection, leading to Khao San Road. He was wearing a media armband provided by the Thai Journalists Association (TJA). 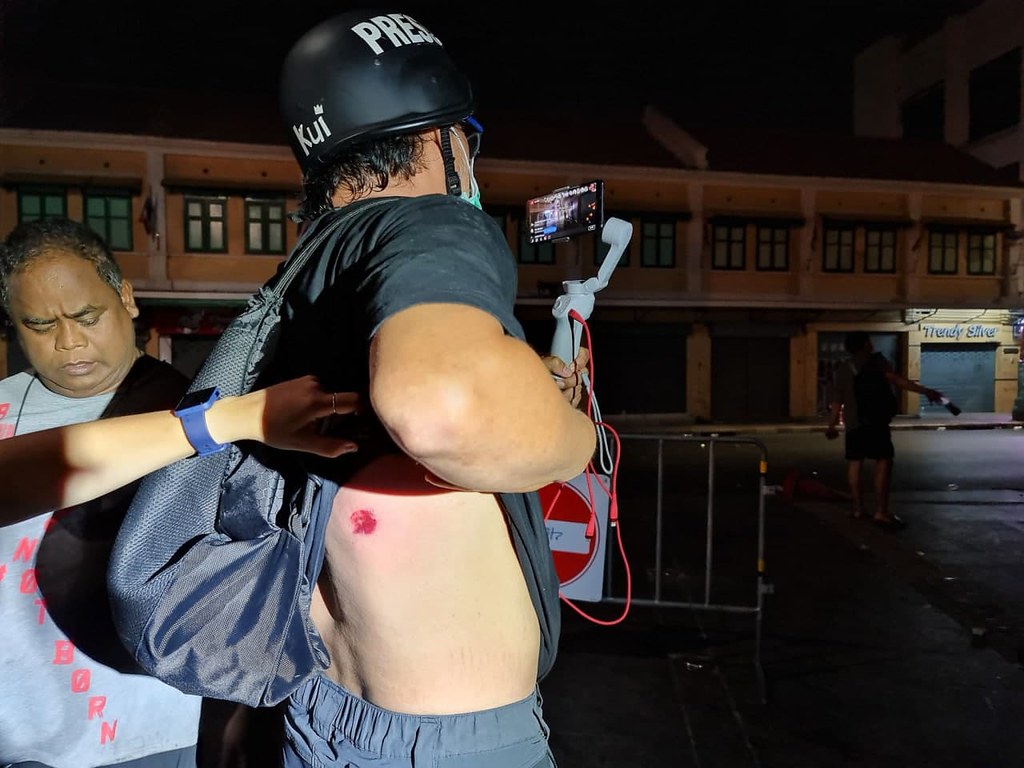 Sarayut showing his bullet wound. He still kept on reporting on Facebook live.

During the night, journalists from Channel 8 and Khaosod were injured by rubber bullets, one to the head and one to the leg.

The police set up a line at Kok Wua intersection, moving back and forth to disperse protestors. People who were sitting in Khao San Road booed them before the police moved away from the famous tourist destination which is now less crowded due to the pandemic. 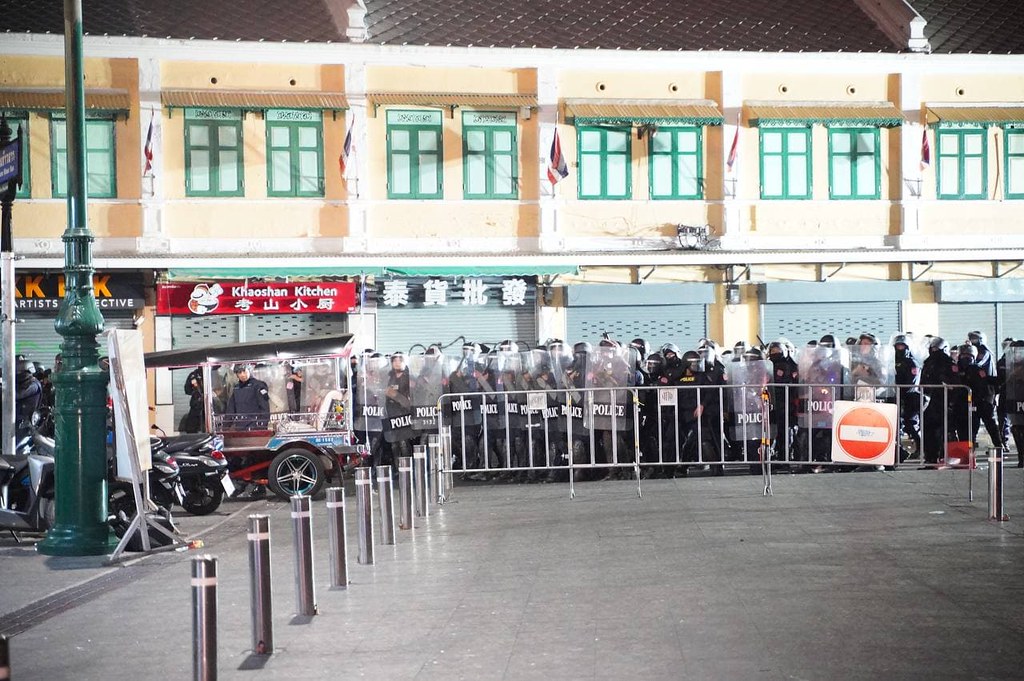 Deputy Police Spokesperson Pol Col Kritsana Pattanacharoen said the police responded to the protest in accordance with legal provisions, noting that the protest was not allowed according to the restrictions of the Emergency Decree to control the spread of Covid-19. The police had warned the protesters not to trespass beyond the blockade. Protesters still came forward and some attacked the police with marbles or bolts fired by slingshots. 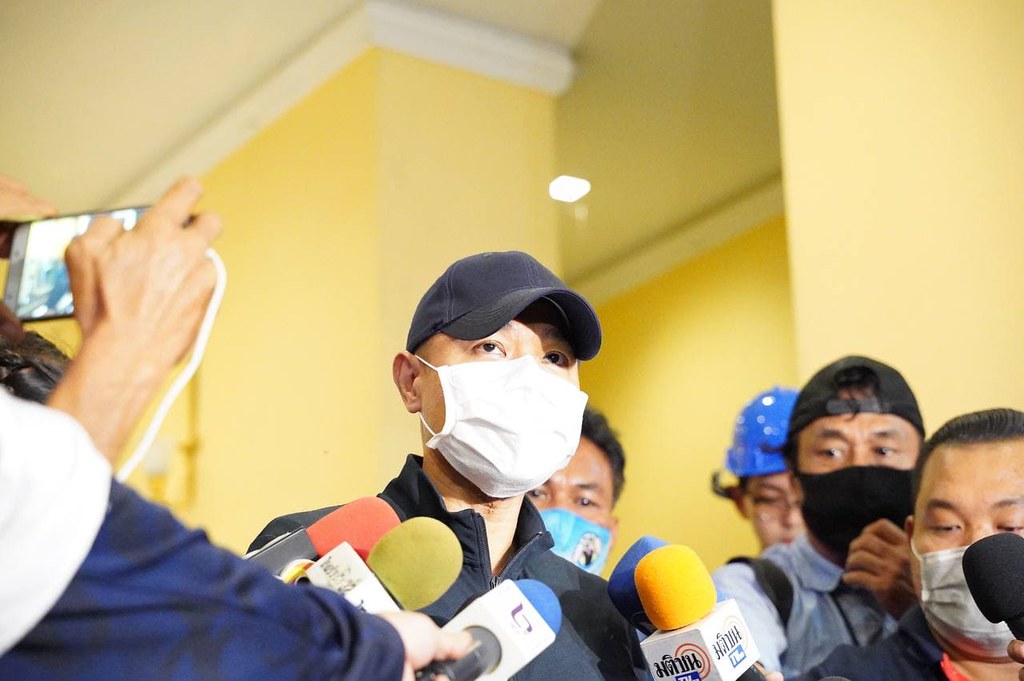 “In carrying out their duty this evening, police officers have used restraint, acting according to the steps of the law, acting strictly according to regulations in political science and legal principles,” said Kritsana.

At 21.15, the Medics and Nurses for the People volunteer group estimated that at least 30 people had been injured from tear gas, rubber bullets, water cannon blasts and assaults.

At around 23.00 a clash broke out at Wan Chat Bridge, 400 meters from the Democracy Monument when protesters seized a police van and used it as a shield. The Tempo News reported men were caught throwing a home-made explosive at the police from the lines of media. Molotov cocktails were used but quickly put out. Police returned fire with tear gas and rubber bullets.

According to the Reporters Facebook live feed, crowd control police staged a crackdown at around 23.00, resulting in 9 arrests. 1 police officer and 1 other person were injured and taken away from the scene.

On 23.30, the Dao Din activist group gathered in front of Khon Kaen University Police Station to protest against the violence in Bangkok.

Calm before the storm

The Free YOUTH Movement, one of the protest organizers formed in 2020, published a statement demanding limits to the power of the monarchy, the demilitarization of politics and universal social welfare. 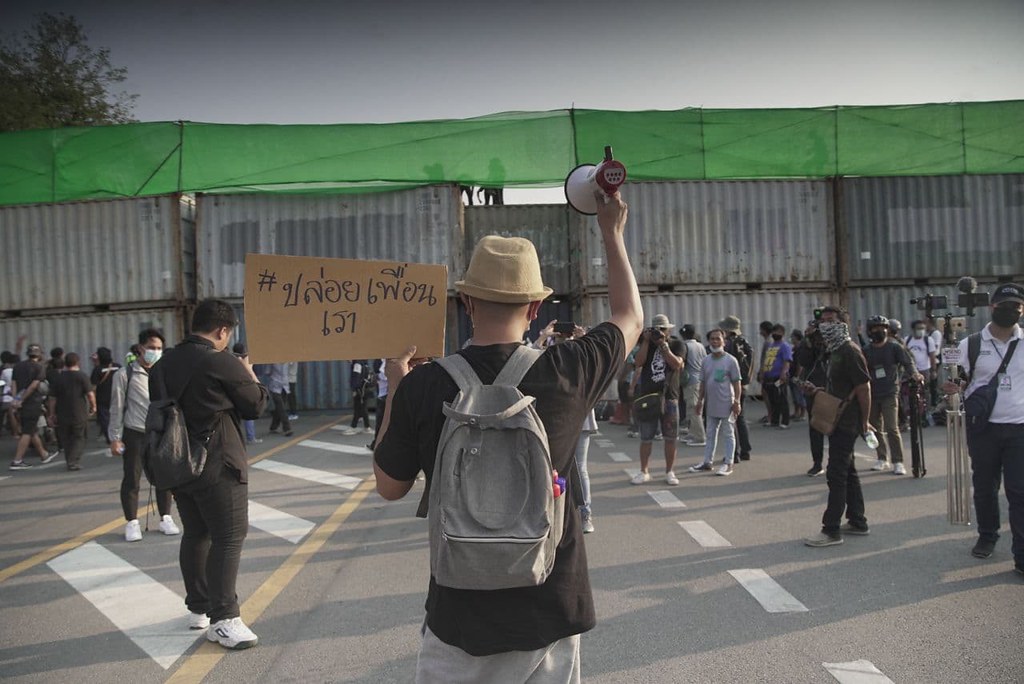 A protester with a placard stating "#Freeourfriends" 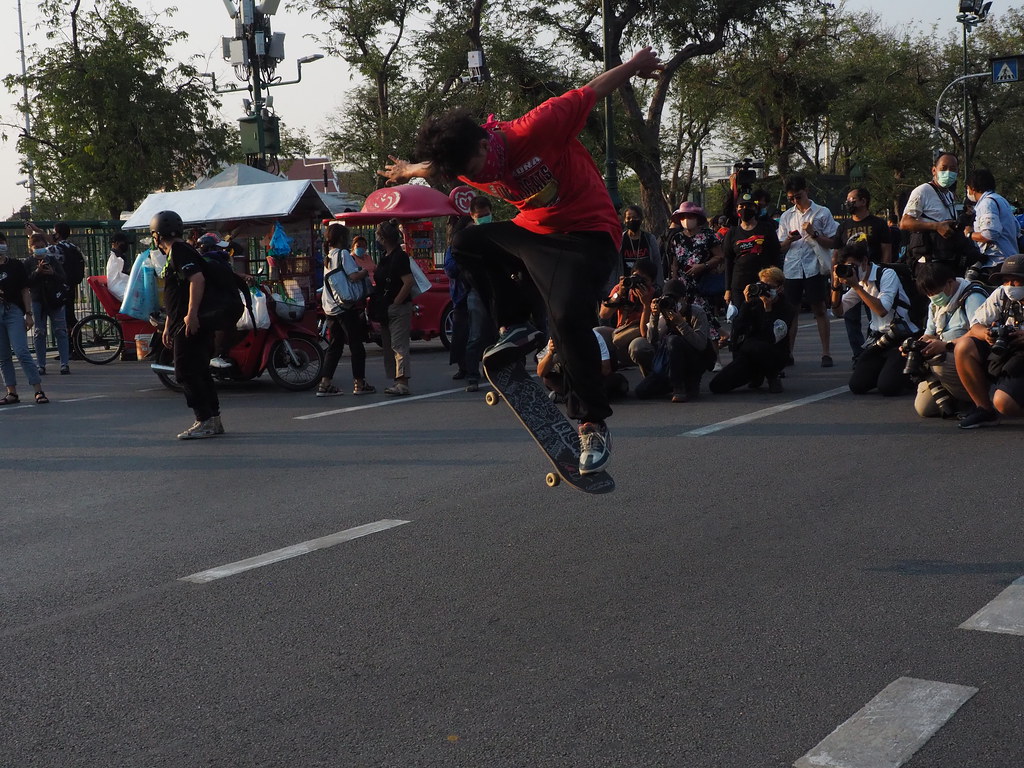 A protester skateboarding at the beginning of the protest.

Activities began peacefully. The protest on Saturday was meant to send messages via paper planes to address the issue of limiting the power of the monarchy under the constitution. People were seen flying kites, raising banners and spraying the ground with graffiti.

The artists' network Free Arts also organised activities during the protest. Earlier in the evening, they spray-painted pictures of activists currently imprisoned on charges relating to political activities, as well as messages such as “Free our friends” and “Abolish Section 112” onto kites, which could then be seen flying above Sanam Luang. 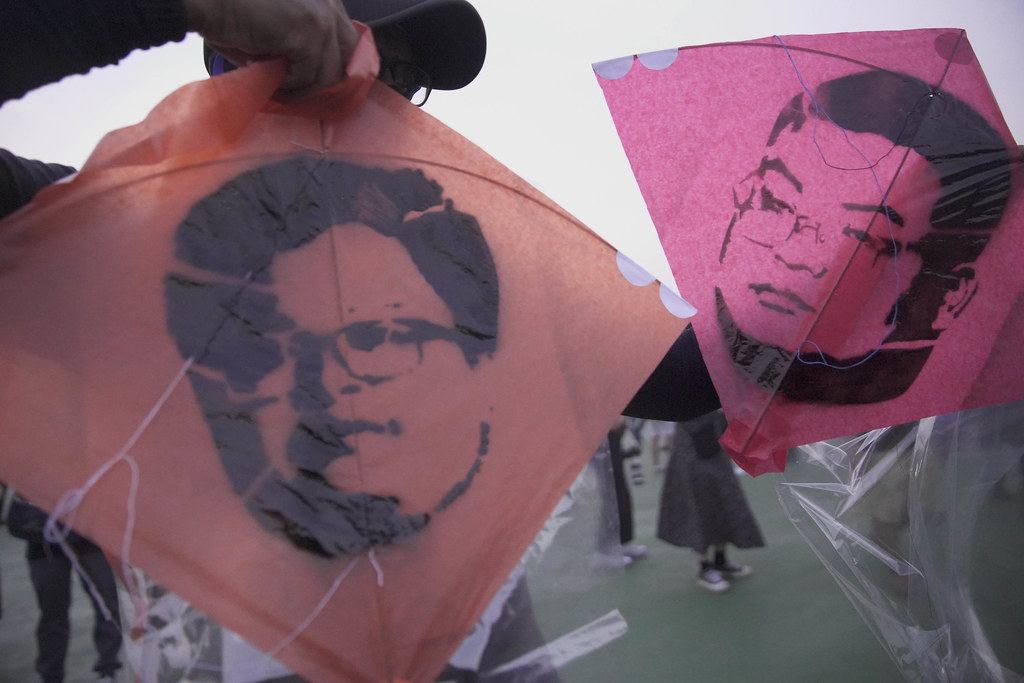 Kites with graffiti of Anon Nampa and Parit Chiwarak, 2 leading protest figures who are in detention pending trial.

A representative of the group said that the idea behind the event is that several of the imprisoned activists are facing charges because of the protest at Sanam Luang on 19 – 20 September 2020, so the group decided to paint their pictures onto kites to show that they are thinking of those who are imprisoned.

The representative also said that one of the activities they thought of on the return to Sanam Luang was flying kites, and that the event is also symbolic of how Sanam Luang used to be a public space where anyone could organize an event.

Free Arts also planned to use the space for dancing, and said that there was also a plan for participants to read out Anon Nampa’s speech on monarchy reform. However, these activities did not take place as the protest was cut short due to police violence.

Eak, joining the protest wearing a T-shirt with a parody of the Naruto manga, changing the name to Narutu, a reference to the nickname (Tu) of Prime Minister Prayut Chan-o-Cha. He said he wanted to express his anger at Thai politics. 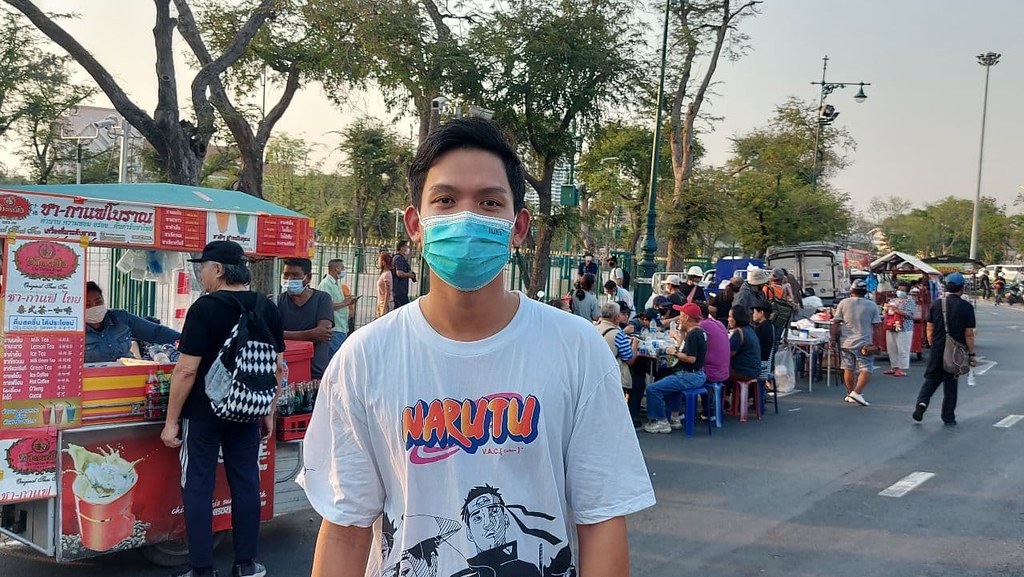 “I am angry at the senators who rejected the draft constitution. I am angry that our friends were ordered to be detained by the court without a verdict. It is against international principles, against every theory, against everything.”

Eak wants the government to step down for the good of Thai children and the future.