Home » A virtual afternoon with Arundhati Roy in Bangkok: “The Pandemic, (Necro) Politics and Literature”

A virtual afternoon with Arundhati Roy in Bangkok: “The Pandemic, (Necro) Politics and Literature”

A spectre is haunting growing nations - the spectre of intolerance to the old order of things. All the powers of the old order have formed a holy alliance of hatred, hidden fascism, and effacing (if needed) to exorcise this spectre. The mythical words of Karl Marx still linger in a new age of pandemics and digital realities. The halt bought by the pandemic has become a time for self improvement and spiritual meditation for the rich while the literate middle classes suffer from collective guilt succumbing to the injustices taking place in their homes or elsewhere.

As for the poor, well, you know how that story goes - or you might not because… The point being, a pandemic has always been a part of our reality. The type of pandemic I am implying is a more dangerous sickness.  A sickness of the mind. A pandemic seeping through minds, congealing ideas of conformity, passiveness and sheer selfishness exploited by higher powers to do as they please. Yet, there are rare breeds who dare to shrug off the damp blanket of political fear to ask the unquestionable questions. 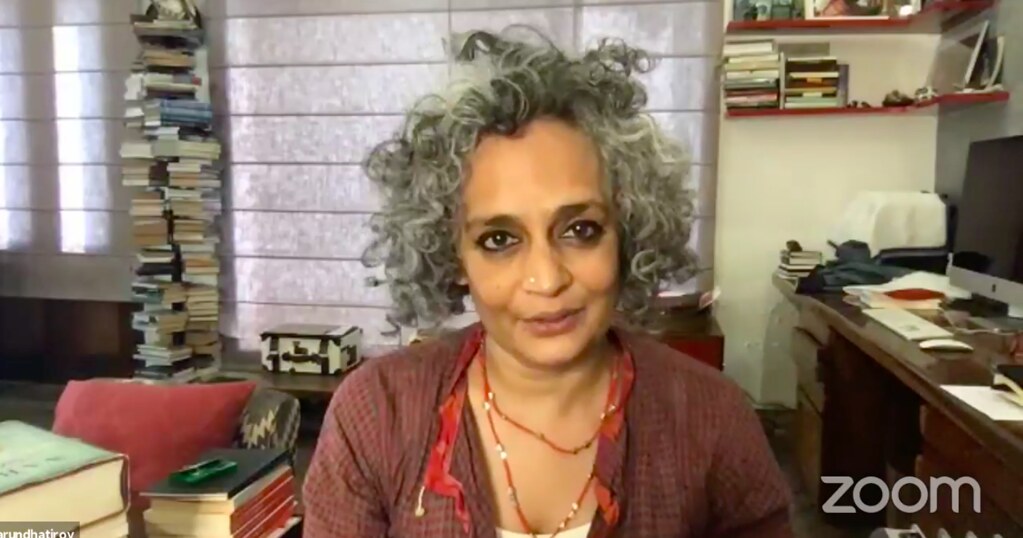 Arundhati Roy was introduced to me by my mother who is an extraordinary simple woman from Cuddalore. I was six years old when I took “The God of Small Things” (1997) from my mother’s bookshelf, like any child I was looking for pictures and only found one of the writer herself. Needless to say, I was surely disappointed but the memory of recognising myself in her photo is painted on my heart with permanent ink. My family comes from the margins of India, my grandmother was a poor fisherman’s daughter, married at fourteen, divorced by eighteen, a Muslim woman with four children in the remote town of Cuddalore. Consequently my mother could only afford an eighth grade education and the village did not understand my uncle’s odd behaviour of dressing up like a girl, resulting in his suicide. They emigrated to Bangkok to seek better opportunities which they received. Yet, their stories of struggle as women, as Muslim women, as poor women in Cuddalore has been an integral part of my upbringing. Reading “The God of Small Things” (1997) for the first time, was like living and breathing the stories of my family. It felt like I had gone home. The butterfly effect suggests that every decision we have made has resulted in us being exactly where we are. Even a minuscule difference could have altered our present.

As of now, I am a 24-year-old woman, reader of postmodernism, a researcher of violence and ultimately an aspiring writer. The memories of reaching for her book as a six year old and reading the book has been pivotal moments sealing my fate in the decisions I have taken. I doubt I would have been interested in literature, liberal arts or let alone writing if I had not encountered Roy’s work, such a magical presence is Arundhati Roy, writer of novels considered as masterpieces like “The God of Small Things” (1997) and “The Ministry of Utmost Happiness” (2017).  She is a modern political shaker devoting her life to themes of injustice, destructive ideologies and violence against marginal communities. Her political essays such as “My Seditious Heart” (2019) cannot be praised by my words, I can only stubbornly encourage you to read them. Simply said, she is a writer who addresses the spectres of our contemporary society and with an impeccable timing she finally arrived in Bangkok. Thanks to the Department of English, Faculty of Arts at Chulalongkorn University!

The online event “The Pandemic, (Necro) Politics and Literature” was moderated by Associate Professor Dr Verita Sriratana and joined by guest panellists Chalita Setthachayanon, Pattanun Arunpreechawat, Palin Ansusinha, and Judha Su. Within minutes of starting, Professor Verita vividly explained the urgency of this event during a pandemic. The political powers’ treatment of the pandemic infects us deeply and the Greek prefix necro- (meaning death) emphasises the viciousness of deciding who dies and who does not. This ties in with much of Arundhati’s oeuvre, with a ubiquitous exploration of how ‘big things’ effect ‘small things’ in a manner she uniquely does so well.

Roy sat in a warm room with jumbled towers of books on each corner, and discussed a range of controversial topics, encouraging the panellists to chip in for an organic discussion. She touched on some current issues such as the farmers’ protests in India and the vilification of Rihanna and Greta Thunberg’s toolkit for making the protest even more conspicuous. She addressed her own privilege of speaking out without fear of consequences, as opposed to the students or farmers who are thrown into jail with no valid charge, although she has faced her own share of court cases, police threats and jail sentences for expressing her resentment towards the leaders of the Hindu nationalist Bharatiya Janata Party (BJP). This event was one of the many occasions where she called India’s Prime Minister Narendra Modi a “street goon” as he hails from the organisation Rashtriya Swayamsevak Sangh (RSS). The extreme RSS ideology infiltrates the deep state, thriving on violence against Muslims and castes and ultimately declaring India as an absolute Hindu nation.

Beginning by sharing her experience of speaking at the Elgaar Parishad, sharing the disturbing toll that the pandemic has taken on migrant workers, and criticising modern day Bollywood films as spoofs with no grit, compared to the 70’s films starring Amitabh Bachchan, revolving around small town crises and solving minuscule structural problems of a nation such as railroads. As a listener, the diverse range of topics discussed went everywhere and home.

The panellists exceptionally used this platform to address the spectres of modern day Thailand, shedding particular light on what has been happening here, whether it was the topic of gender and queer bodies, the failure of leftist politics in dealing with gender and caste, pro-democracy protests, cherry picking the digital public from those ones who do not have the means during the pandemic in the guise of great help. There was a sense of shared solidarity between Roy and the panellists. Although from different countries, Roy proposed there are “chilling similarities” between these nations. The learning was reciprocated as both ends offered something new to take away.

It was a gathering of hearts despite the serious topics discussed and to be a mere fly on the wall was a privilege. For me, this was another one of those pivotal moments I secretly share with this writer, bringing me closer than ever to her and leaving me eternally indebted. The experience of listening to Roy can only be summarised best by her own words from her novel “The Ministry of Utmost Happiness” (2017), “I’m a mehfil, I’m a gathering. Of everybody and nobody, of everything and nothing. Is there anyone else you would like to invite? Everyone’s invited.”

Fathima Mallick is an alumna of the BALAC program at Chulalongkorn University. Currently she is working as a content writer while independently researching the deconstruction of violence in various novels such as Han Kang’s “The Vegetarian” (2015) and Arundhati Roy’s “The Ministry of Utmost Happiness” (2017) and in pursuit of writing “that one good story”. She can be reached via her email address: [email protected]