On 6 March, protesters marched to the judicial court complex on Ratchadapisek Road to express their anger at the lengthy and questionable detention of pro-democracy protesters and political prisoners. 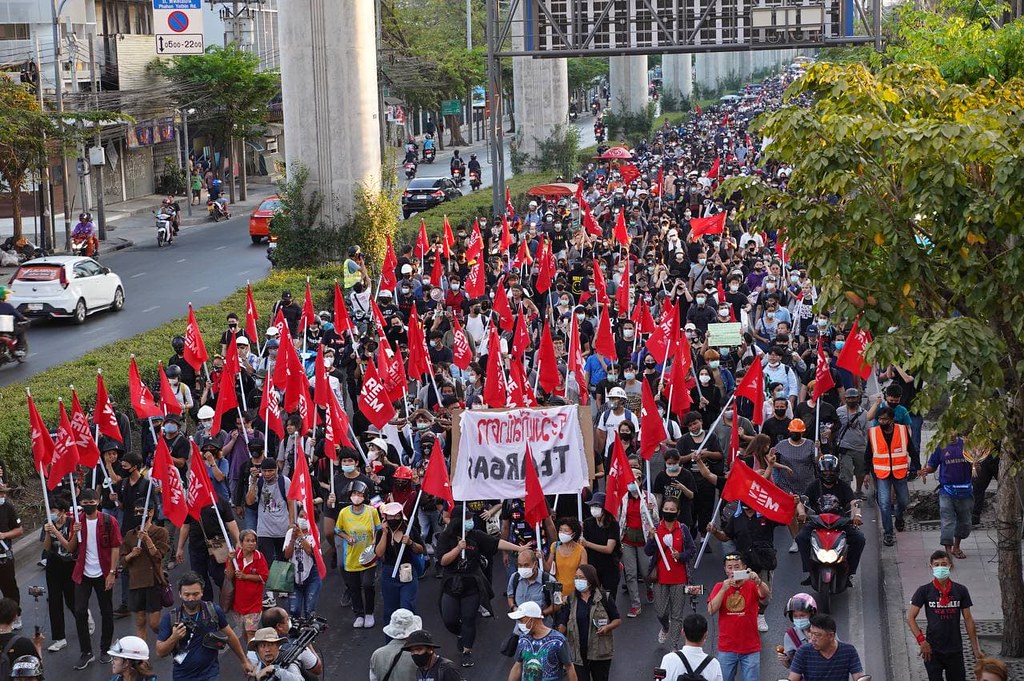 The protest, designated by the Free YOUTH movement under the theme Restart Democracy (REDEM), was one among at least 4 pro-democracy protests held in Bangkok and nearby province, and 1 pro-establishment protest at the Central World, Ratchaprasong.

The protesters started the march at Lat Phrao intersection at around 17.40. However, a commotion took place nearby as SWAT police surrounded a number of the “We Volunteer” protest guards who were eating at the nearby shopping mall. Piyarat Chongtep, the group leader, was among those arrested. They were held in 3 police vans. 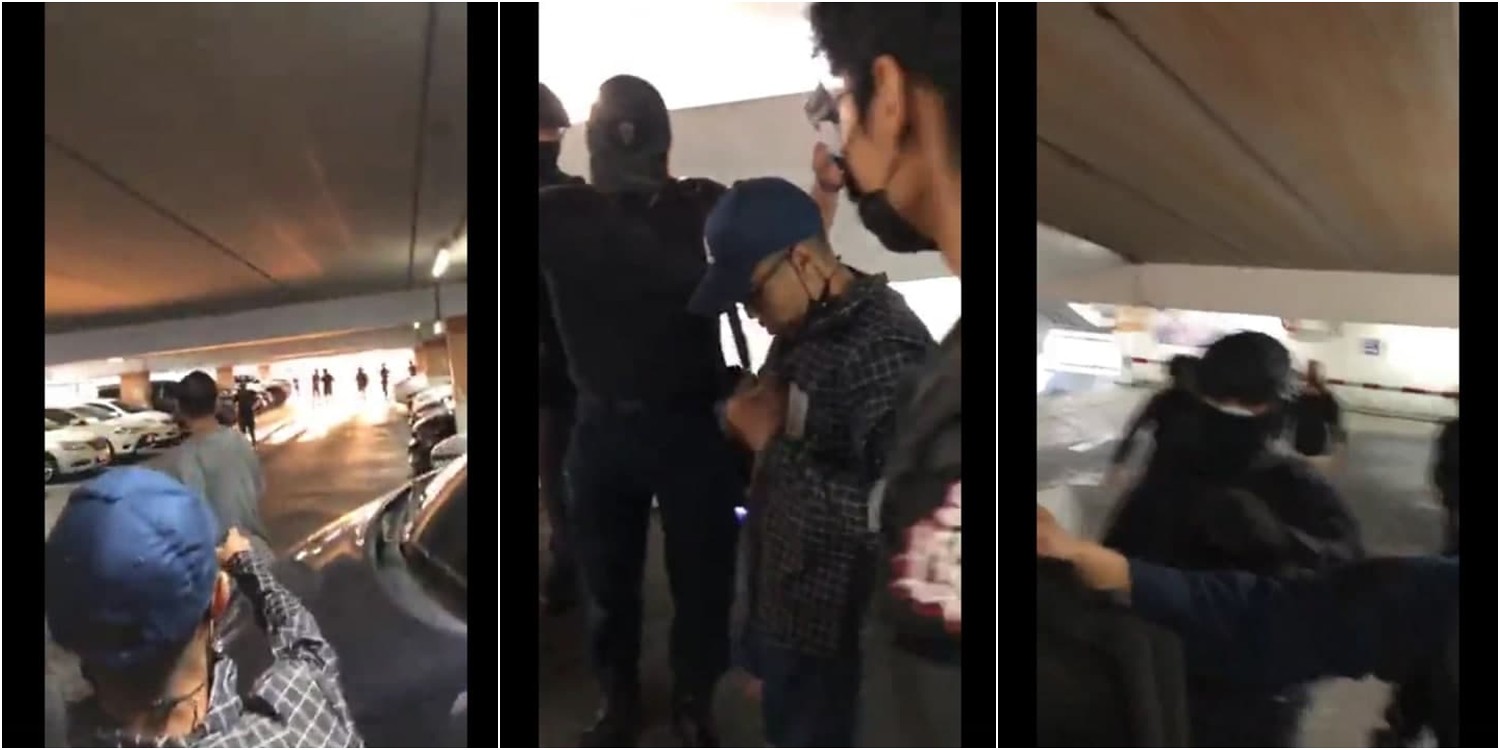 The arrest of We Volunteer team. Video is available in Piyarat's Facebook.

At the end of the protest, those arrested were divided into 2 groups: 18 were taken to Border Patrol Police Region 1, Pathum Thani, and the remaining 28 went to Paholyothin Police Station after protesters managed to surround the police van they were in and others managed to break out of another van.

The police had prepared water cannon trucks and crowd control gear to handle the protest. At around 13.00, razor wire, lines of police and nets were set up inside the court premises. However, the protest went off peacefully without any clashes.

At 19.02, protesters arrived at the court entrance and began the “burning rubbish” activity by piling up material and setting it alight. The fires went on until extinguished by volunteer guards at 19.10. 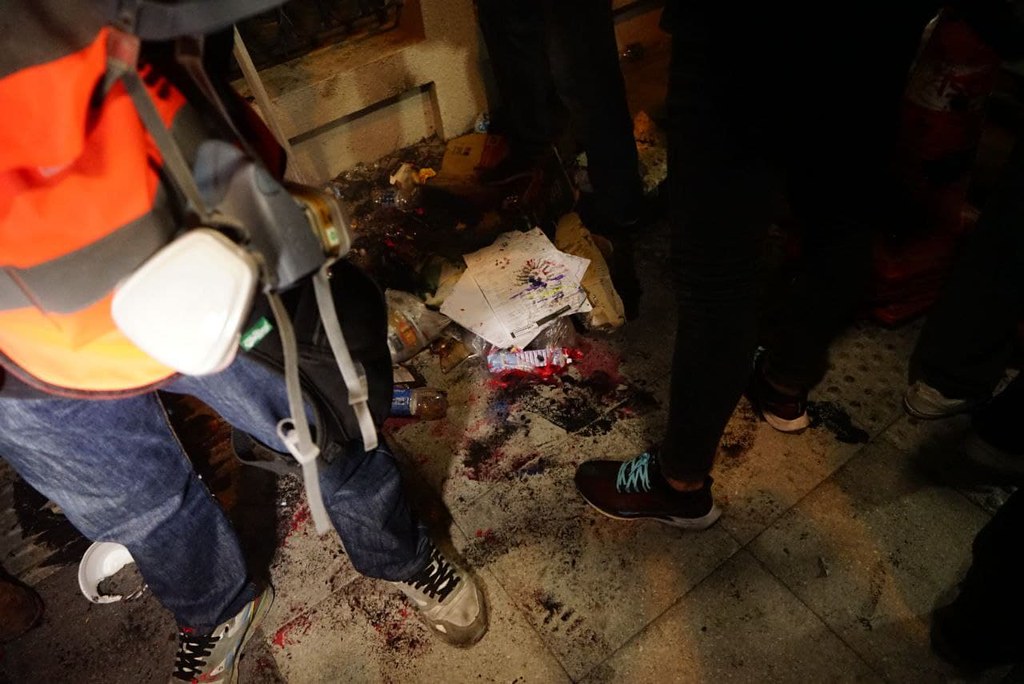 A pile of burned materials extinguished by the protest guards.

It is reported that portraits of the King and the late King Rama IX were burned during the protest. Some protesters were seen trying to stop this. The demands for monarchy reform and repeal of Section 112 of the Criminal Code, which criminalizes insults and expressions of hostility against the king, queen, heir and regent, were also presented.

The burning of royal pictures has aroused wide interest after Chaiamorn ‘Ammy’ Kaewwiboonpan, lead singer of the pop band The Bottom Blues, was arrested for allegedly setting fire to a large portrait of King Rama X in front of Klong Prem Central Prison on the night of 27 February.

At 19.30 a blown-up letter "in the People’s Name, to the People's Court", was placed at the King’s portrait. The letter condemns the courts for the unfair detention of pro-democracy protesters and political prisoners and demands their release.

The protest dispersed at around 20.55. Protesters were heard inviting others to join the march on Sunday, led by Jatupat ‘Pai Dao Din’ Boonpattararaksa, who started a 247.5 km march on 16 February from Nakhon Ratchasima to the Democracy Monument. The march is scheduled to finish on 7 March.

The protest on Saturday was the second under the REDEM theme. Their demands are for the monarchy’s power to be limited, for the military to stay out of politics, and for universal state welfare.