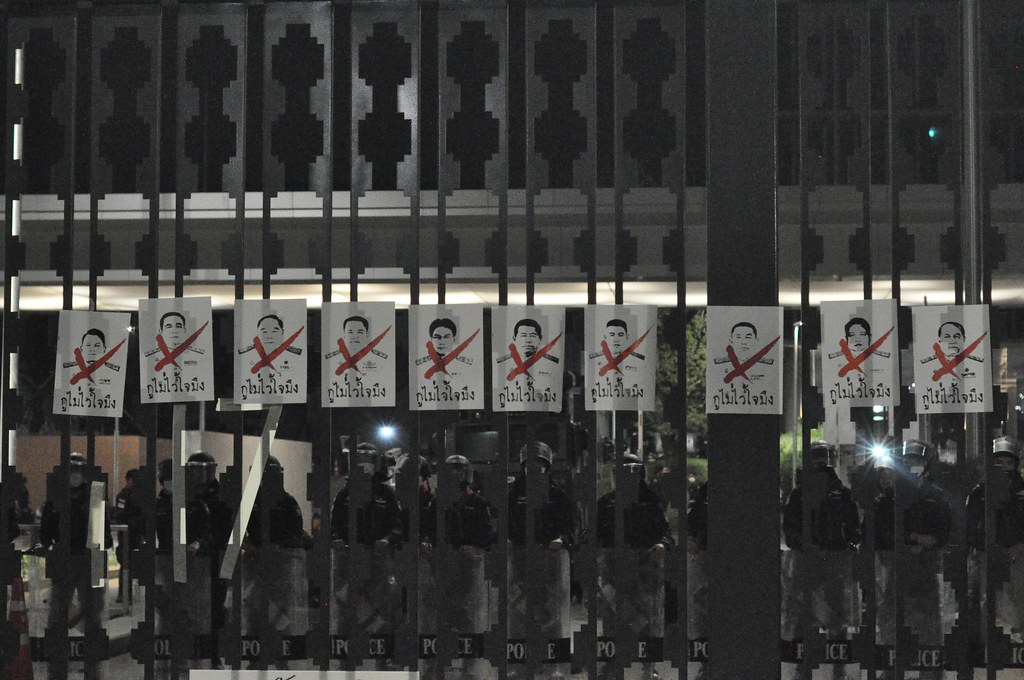 The vote took place at 10.50 on Saturday (20 February) after 3 days of debate, during which opposition MPs spoke about the failures and corruption of the Prayut administration.

The results of the vote were:

However, the opposition’s efforts did not completely go to waste as netizens seem to be paying particular attention to the no-confidence debate. There were live streams of the 3-day debate, as well as the use of the hashtag #อภิปรายไม่ไว้วางใจ (#NoConfidenceDebate) to spread information.

The main issue of the no-confidence debate to catch public attention was the accusation of police position-buying, presented by Move Forward Party MP and former activist Rangsiman Rome, who said that Gen Prawit and Gen Prayut, who have overseen police affairs, were allowing cronyism and position-buying to take place in promotions. The involvement of the royal volunteer programme and the role of Pol Lt Gen Torsak Sukvimol, Commissioner of the Central Investigation Bureau and younger brother of ACM Satitpong Sukvimol, Grand Chamberlain and Private Secretary to King Rama X, in promoting certain police officers were also revealed.

The hashtag #ตั๋วช้าง (“elephant ticket”) trended briefly on Twitter as netizens spread the information that Rangsiman spoke about, after repeated protests from government MPs prevented Rangsiman from completing his presentation and forced him to present the material outside the parliamentary session, where he is not protected by an MP’s legal immunity. He also presented a document stating that police officers who refused recruitment into royal units were punished.

Other issues were also brought up during the debate, such as the attempt to restore mining rights to a certain company in exchange for its withdrawing its legal case against the prime minister, a rubber glove corruption scheme, the military Information Operations (IO) programme against pro-democracy protesters, and state officials’ involvement in human trafficking.

A protest took place in front of the parliament compound following the vote, led by the student activist group United Front of Thammasat and Demonstration (UFTD). Riot control police and a water cannon truck were reportedly seen in the area before the scheduled starting time of the protest at 15.00. However, student protest leader Panusaya Sithijirawattanakul said the organizers had spoken to the police and the event was allowed to take place. 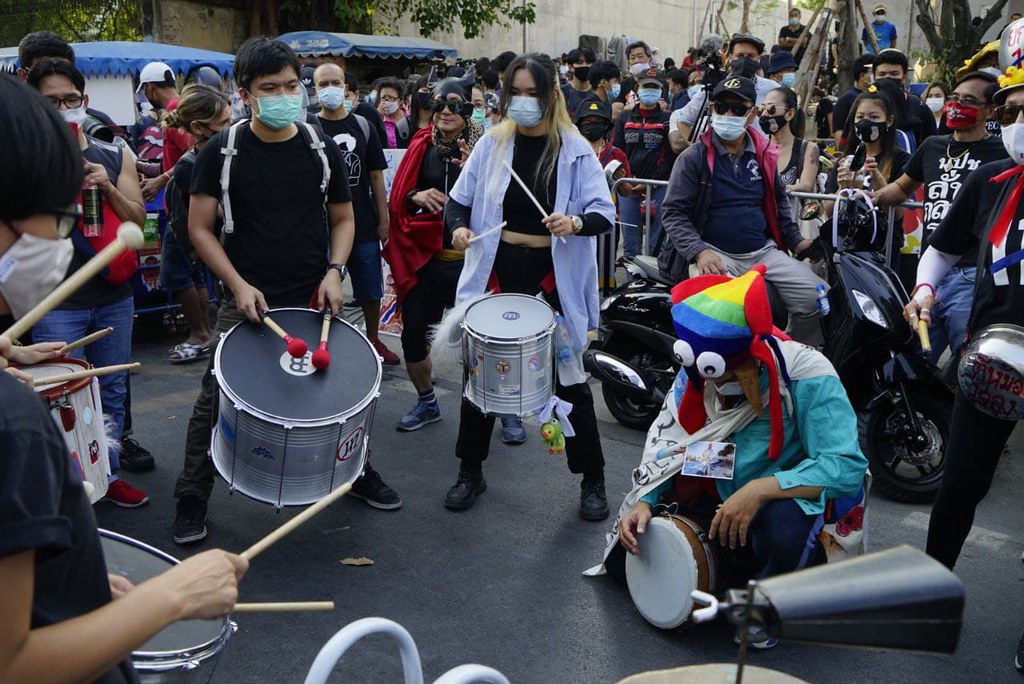 A drum performance during the protest

Panusaya said that there would be no violence during the event, and that there was no reason for the police to use force against the protesters. She also said that the planned activities are speeches, a no-confidence vote by the people, and other creative activities.

She said that the protest still stands by the same 3 demands of the 2020 pro-democracy protests, which are the resignation of prime minister Gen Prayut Chan-o-cha, a new constitution, and monarchy reform.

Activist Atthapol Buapat also gave a speech during the protest calling for the repeal of the lèse majesté law, or Section 112 of the Thai Criminal Code, which has been used to silence political dissenters, and for those facing charges under the law to be granted bail, such as the four activists who are being detained pending trial, and Anchan, a 63-year-old woman who was sentenced to 43 years in prison on Section 112 charges. 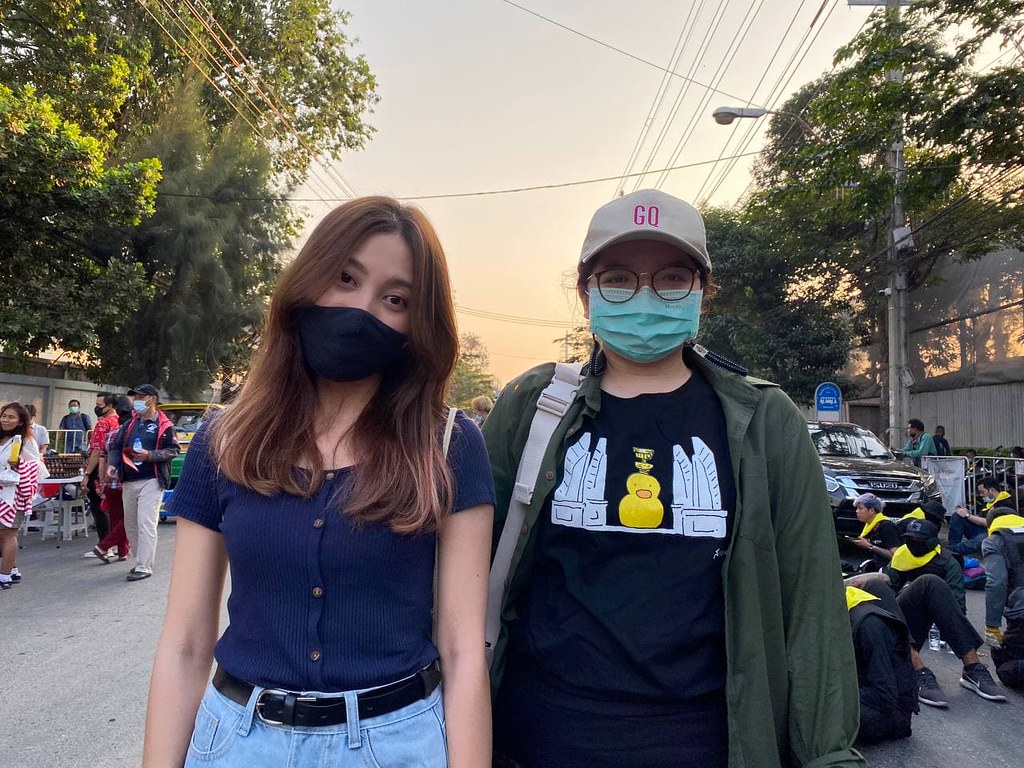 Up to 1000 people joined the protest in front of the parliament compound to express their disappointment, including Kitty and Bear (pseudonyms), who said they came to the protest to express their disagreement with the result of the no-confidence debate, as the 10 ministers are still allowed to remain in office despite the evidence brought to the debate by opposition parties.

Bear said that the contradiction in this country is that, while we tell each other to “play by the rules,” the law-making process is wrong to begin with and laws are made to benefit certain groups of people. A complete system reform is therefore needed.

"[I] want every related party to enforce the law as it should be. Whether wrong or right, it must be used, regardless of whose faction you belong to," said Bear.

Activist Waranchai Chokchana also came to the protest. He said that the result of the no-confidence debate is as expected, because parliament is ruled by the government coalition and the 250 appointed senators and some opposition MPs also voted in favour of the 10 ministers. He said that the power of the people is needed in a situation like this.

"I still have hope that students and people outside parliament will do the same as in Myanmar and in the past as in 1973 when [we] ousted the dictators Thanom and Prapas, in 1992 when [we] ousted Sujinda Kraprayoon, because, if we don't do this, dictator Prayut will feel that he can still stay on", said Waranchai. 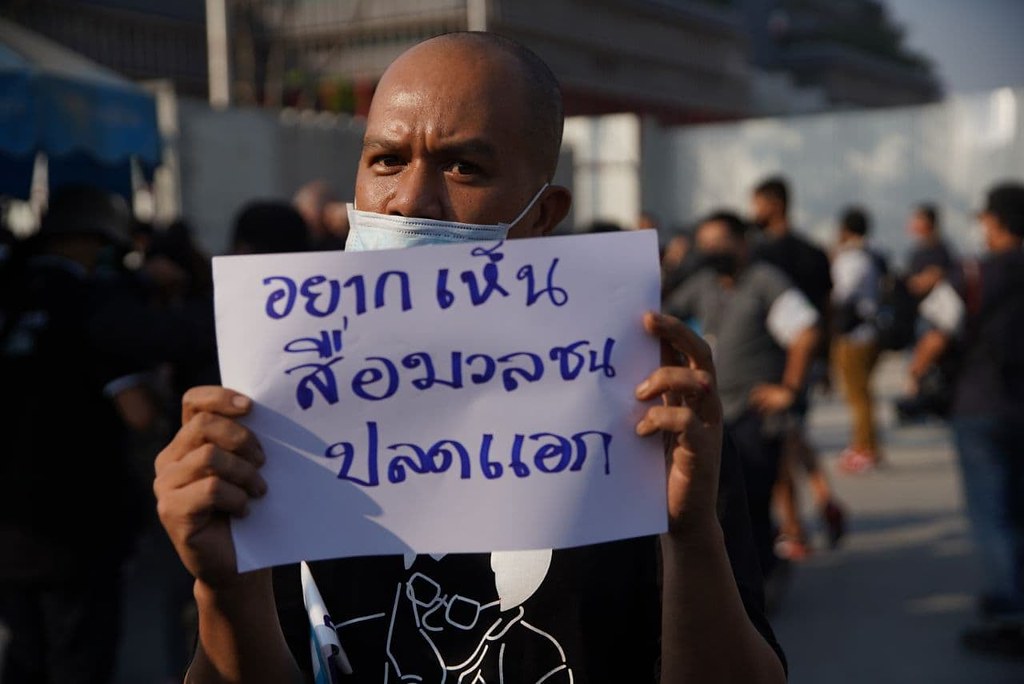 Meanwhile, Jack (pseudonym), who said he has not watched a television programme in several years, came to the protest with a sign saying “I want to see a liberated press.” He said that he wants to see the media question each other whether they have ever thought that the media has been part of the problem throughout the last 10 years of political crisis.

Jack asked whether the media is brave enough to say that a military coup is wrong, and said that he would like them to tell the people honestly what they can or cannot say if they are being pressured by any authority, and whether they are on the side of democracy or not, so people can choose whether or not to watch them.

As for today’s protest, Jack said he would like to see honest and unbiased reporting from the press. 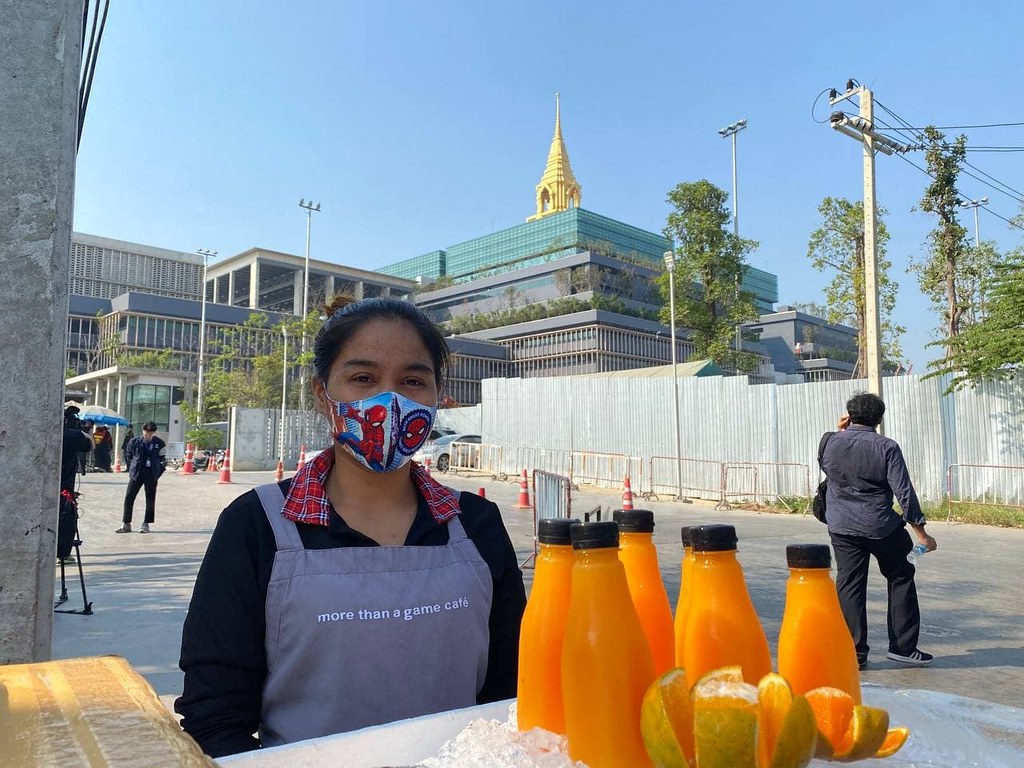 Some who came to the protest were those affected by the Covid-19 pandemic. Belle, 28, is an orange juice vendor and said she has been setting up a stand at protests. She said that she could not go to every protest, as she has a child to care for, but her husband, who works at a tattoo parlour in Khaosan Road, is losing income as the parlour has no customers. She said that she left her child with her mother-in-law, so she would like to go home as soon as possible.

She said that she normally earns around 3000 - 5000 baht at each protest, but at the protest at Sanam Luang on 13 February, she earned around 2000 baht, as a clash occurred between protesters and riot control police.

“When [the protest leaders] started counting down, I immediately got my cart and moved back,” she said.

Belle said she would like the police to stay on the side of the people, who are unarmed. 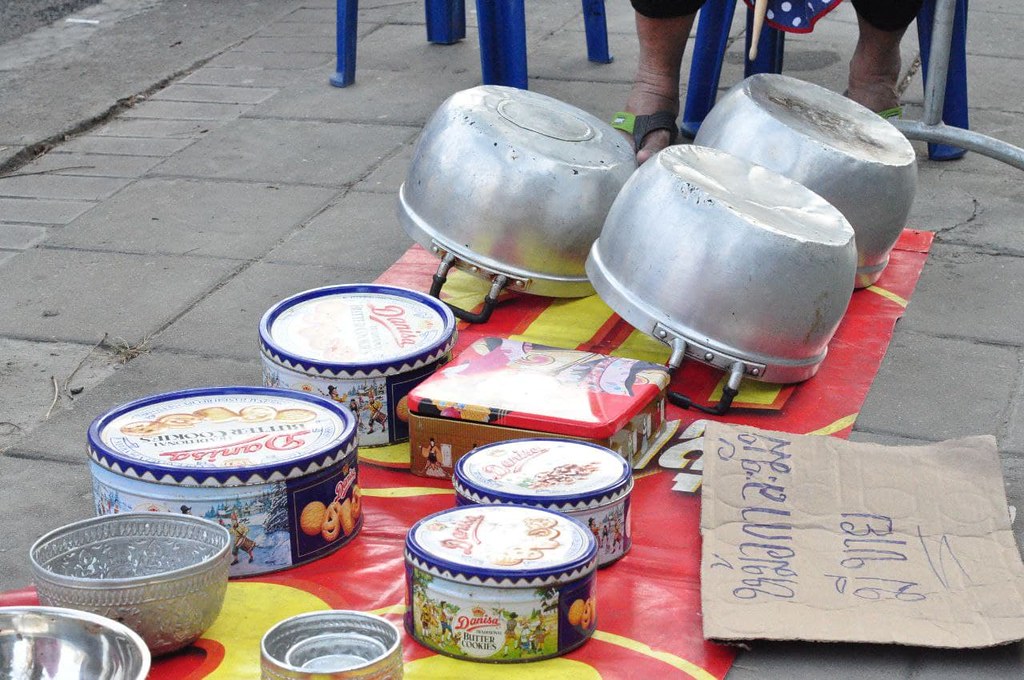 Nui's stand at the protest

Meanwhile, Nui, a 65-year-old vendor, brought pots and metal boxes to sell to protesters who would like to use them during the protest. She said that she used to be a drinks vendor in the Pratunam area, but was forced to leave due to a government zoning policy. After the authorities relaxed their measures, she moved to Siam, Ratchadamri, and Silom, but her business was badly affected by the Covid-19 pandemic.

She said she received money from the government’s “We Win” aid programme, which she used to buy supplies for her shop, but it was inconvenient as she could only buy from shops in the programme and the money can’t be used for anything else. She said that she would prefer to receive cash, because then the money could also go towards other expenses, such as rent, electricity and water bills, or medicine.

“I want to have my shop where it used to be. Sometimes, I have to move from place to place, and that’s difficult. I am old. I can’t travel very far. It got worse when this situation happened. I am crying every day, but I think I just need to keep fighting. It might work someday,” Nui said.

Boonliang and his wife were also among the vendors at the protest, who are nicknamed “CIA” due to their network of information which allows them to arrive quickly at protest sites. They used to sell drinks at concerts and festivals before the pandemic took such chances away.

Like Nui, they said that they were able to register for the “We Win” programme, but said they would find it more useful if the money could be given in cash so it can be used on rent and other bills.

At 20.53, the organizers announced the conclusion of the protest. Student activist Benja Apan read the UFTD’s statement saying that the government has been ignoring the people’s voices, and many people who speak out for freedom are facing harassment and legal prosecution. The UFTD therefore stands by the same three demands of the pro-democracy movement, and calls on the people to keep fighting alongside them for a democratic society.

Another protest took place the day before in front of parliament during the final part of the debate, organised by the same team behind the Mob Fest protest at Ratchadamnoen Avenue last November. It was attended by around 100 – 200 people, and speakers took turns holding a no-confidence debate in parallel to the parliamentary debate, which was being live-streamed on a nearby projector.