Sirichai (last name withheld), a 1st year student at the Puey Ungphakorn School of Development Studies, Thammasat University, and a member of the student activist group United Front of Thammasat and Demonstration, was arrested during Wednesday night (13 January) on a royal defamation charge under Section 112. 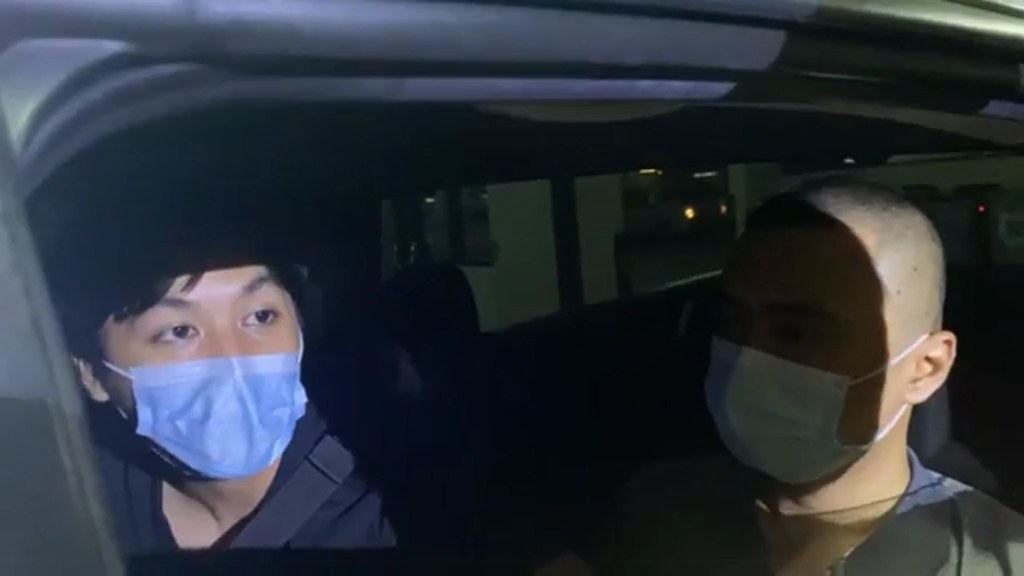 Sirichai (left) being held on a police car

UPDATE: Police made an another arrest again after release

At 13.56 on 14 January, Thai Lawyers for Human Rights (TLHR) tweeted that Sirichai was re-arrested by police officers from Pratunam Chulalongkorn Police Station in Pathum Thani after he had been released by Thanyaburi Provincial Court.

As the arrest was made in the area under the jurisdiction of Thanyaburi Police Station, Sirichai was taken there.

It was first announced that Sirichai would be charged under Section 112 of the Criminal Code. However, Pratunam Chulalongkorn police later said Sirichai would only be investigated as a witness.

Then a police officer from the Technology Crime Suppression Division arrived at the station to charge Sirichai under Section 27 of the Computer Crimes Act for not earlier complying with a court order for him to hand over his computer password.

Sirichai argued that the accusation against him under Section 112 was not computer-related and that he had a lawful right not to hand over evidence.

Sirichai was finally released at 16.30.

Sirichai gave an interview to the media when he was released. He said he was charged with Section 112 and vandalism.

After the police searched Sirichai's residence, he was also charged with possessing an e-cigarette which is outlawed in Thailand.

Thai Lawyers for Human Rights (TLHR) questioned 7 aspects of this arrest, including why the arrest and search was conducted in the middle of the night, questions about the issuance of the arrest warrant, the police denial of access to a lawyer and police refusal to reveal where Sirichai was detained.

Thai Lawyers for Human Rights (TLHR) reported at 23.00 on Wednesday (13 January) that Sirichai was arrested by police officers from the Khlong Luang Police Station on a royal defamation charge under Section 112.

Around 15 minutes later, the students went inside the headquarters to look for Sirichai, after which Pol Maj Gen Pongpich Wongsawat, Commander of the BPP Region 1, came to tell them that Sirichai was not being held there and asked the students to send in one representative while others waited outside as the headquarters is off-limits to members of the public.

At 00.50, the students went to the detention room inside the headquarters, but did not find Sirichai. Parit and Panusaya then tried to contact Pathum Thani police chief Pol Maj Gen Chayut Marayat via phone and were eventually told that Sirichai was being held at Khlong Luang Police Station.

Parit also said that Pol Maj Gen Chayut led the team of officers that arrested Sirichai, and that he told Parit when the students first went to Khlong Luang Police Station that Sirichai had been taken to the BPP Region 1 headquarters.

However, a TLHR lawyer went to the Khlong Luang Police Station at around 1.20 and was told that Sirichai was not at the station.

At 1.36, The United Front of Thammasat and Demonstration went live on Facebook after Sirichai was found at his student hall. He was being held in a police car after the police took him to the hall for them to search his room. The students surrounded the police car and demanded that they wait for a lawyer to arrive before they removed Sirichai elsewhere. They also demanded that the officers present an arrest warrant and a search warrant, but the officers did not comply.

A TLHR lawyer arrived about 10 minutes later and was told by Sirichai that he was arrested under a Section 112 charge. The officers also presented an arrest warrant, as well as a search warrant issued by the Thanyaburi Provincial Court

At 2.20, Sirichai was taken back to Khlong Luang Police Station, where he was informed of the charges. A group of students and members of the public also gathered in front of the police station to show their support, while police officers blocked the front doors to the station building. His friends were also prevented from accompanying him inside the station.

According to Move Forward Party MP Bencha Saengchantra, who also went to Khlong Luang Police Station, Sirichai faces charges under Section 112 for spraying paint on a portrait of the King.

Bencha also tweeted a picture of a note Sirichai wrote asking his friends not to worry about him and to keep fighting until there is equality. 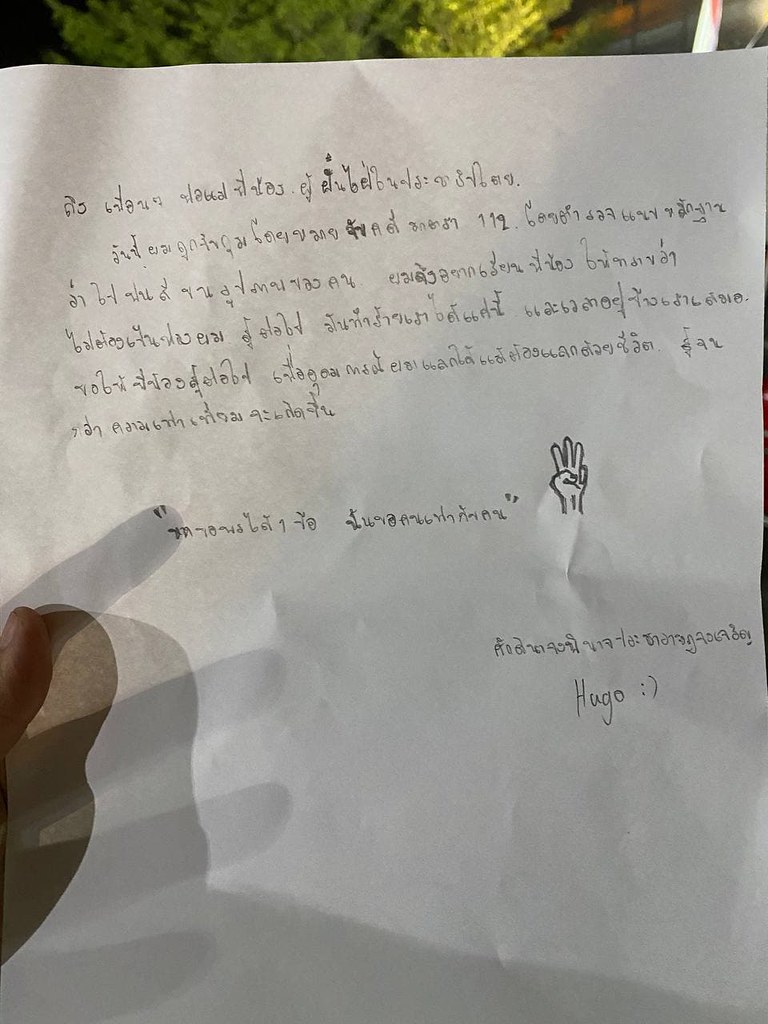 Sirichai was taken to the Thanyaburi Provincial Court on Thursday morning (14 January) for a temporary detention request. The court then ruled to allow him to be temporarily detained for 12 days. His lawyer is now requesting bail using a Thammasat University lecturer’s position as security.

TLHR said that Sirichai’s case is the first time since Prime Minister Gen Prayut Chan-o-cha’s announcement on 19 November 2020 that every law will be used against the pro-democracy protesters that a court issue an arrest warrant for a Section 112 charge.

Around 40 people involved with the pro-democracy movement are now facing charges under Section 112, at least 2 of whom are minors. Several protest leaders are also facing several counts of the charge.