On 31 December, the volunteer protest guard group We Volunteer (WeVo) were organising a shrimp sale at Sanam Luang when they were surrounded by police officers, who arrested 12 members of the group, including group leader Piyarat “Toto” Chongtep.

The arrest took place shortly after a struggle between WeVo members and the police, who were trying to stop them from selling shrimp at Sanam Luang. 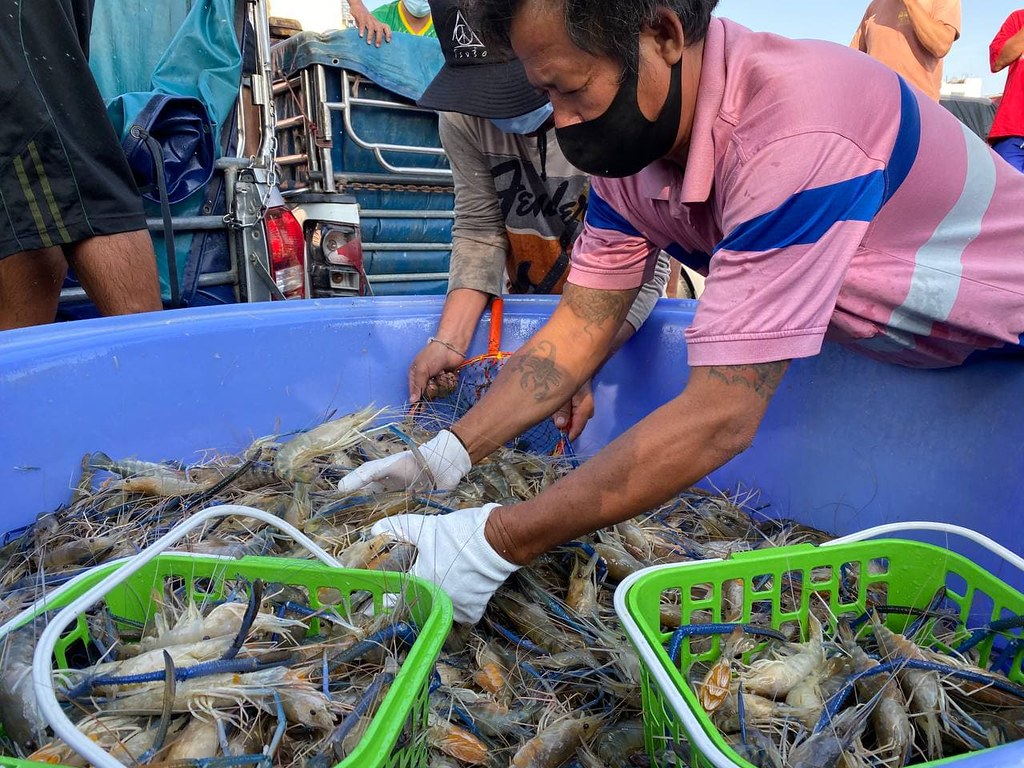 The shrimp being sold in front of the old Government Lottery Office later in the day after two clashes with police offcers.

The 12 WeVo members arrested at Sanam Luang were then brought to the Border Patrol Police Region 1 headquarters in Khlong Luang, Pathum Thani.

Piyarat said that the shrimp were brought from Nakhon Pathom and that they are organizing the shrimp sale to support farmers who are unable to sell their shrimp due to the new outbreak of Covid-19. It has been reported that they have brought at least 4 tonnes of shrimp to be sold.

The remaining WeVo members then moved to the 14 October 1973 Memorial on Ratchadamneon Road to continue their shrimp sale. At 14.00, around 300 - 500 crowd control police officers in full riot gear lined up at the Democracy Monument before pushing through the metal railings set up by the WeVo team and taking control of the area. 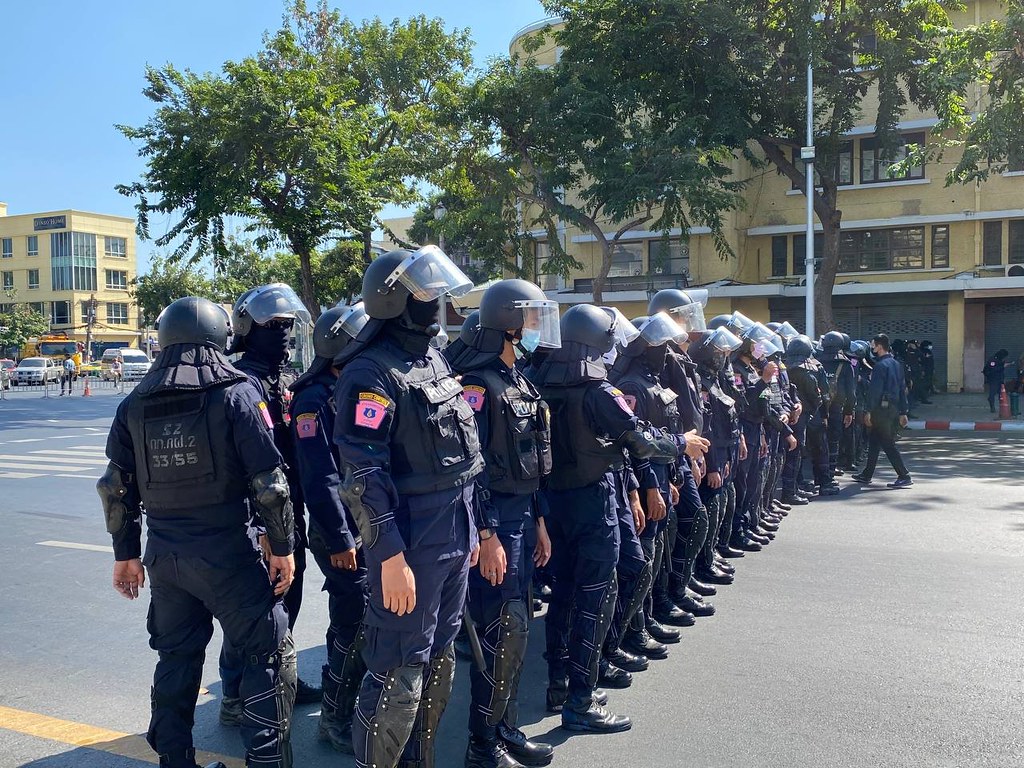 4 other people were arrested at the 14 October 1973 Memorial, bringing the total number of people arrested to 16. They were also taken to the Border Patrol Police Region 1 headquarters.

According to Thai Lawyers for Human Rights (TLHR), 2 people among those arrested are minors.

TLHR also reported that the 12 WeVo members arrested at Sanam Luang have been charged with violating the Emergency Decree and a ban on public gathering under an order issued by the the order of the chief official under the state of emergency, as well as the Communicable Disease Act, and the Sound Amplifier Act.

At 20.30, TLHR reported that the 4 people arrested at the 14 October 1973 Memorial were charged with violating the Emergency Decree and a ban on public gathering under an order issued by the the order of the chief official under the state of emergency, as well as the Communicable Disease Act.

Former MP Dr Tossaporn Serirak, who was at the 14 October Memorial 1973 shrimp sale, said that he came to buy shrimp, but instead found that police officers have come in to arrest people, even though the organisers were trying to help shrimp farmers who are affected by the pandemic and cannot sell their shrimp and the officers could have helped facilitate the shrimp sale, which would benefit everyone. He also said that there is no evidence that Covid-19 can be transmitted through food and that it is safe as long as the food is fully cooked.

Student activist Sirin Mungcharoen also said that she came to the 14 October 1973 Memorial to buy shrimp, because she heard about the shrimp sale, but there were already many police officers around when she arrived. She said that the shrimp sale stand was very small and that the crowd was not causing any disturbance, so she doesn’t understand why there is a need for this many officers. She said that she would be staying around the area to see what she can do. 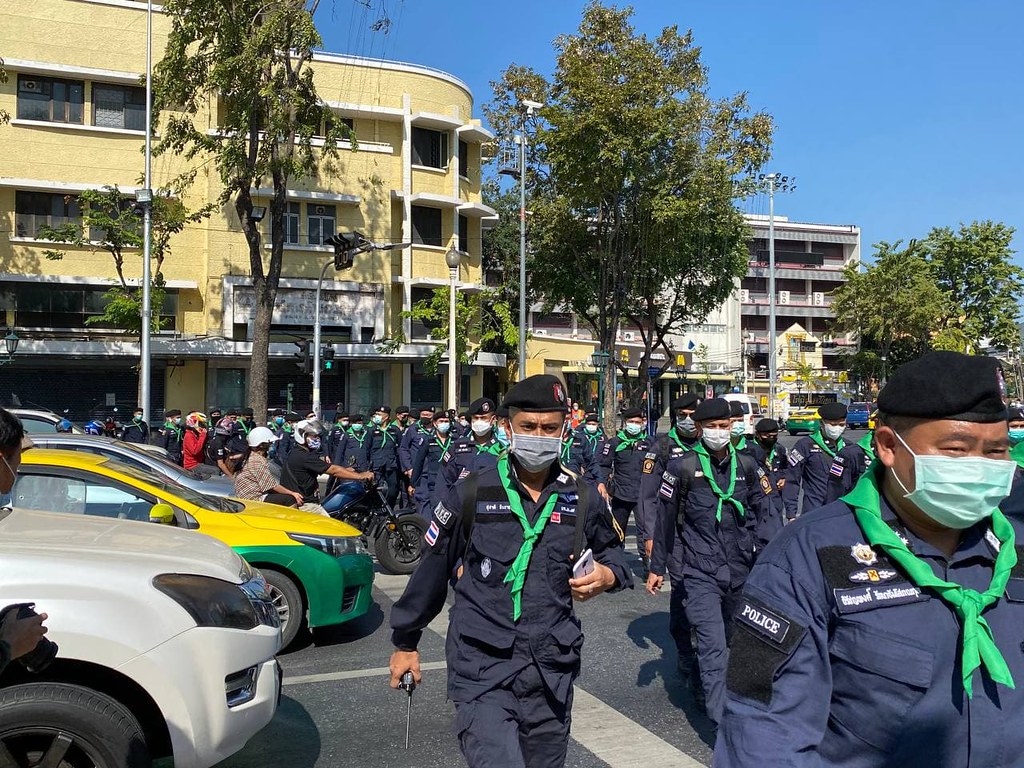 Crowd control officers seen near the Democracy Monument, before they surrounded the shrimp sale activity at the 14 October 1973 Memorial.

As of 15.30, the remaining We Volunteer team are selling shrimp at the old Government Lottery Office as people continue to line up to buy the shrimp. They said that they have negotiated with the police and will be here until they have sold all the shrimp.

As of 23.00 on 31 December 2020, the police has denied bail for all 16 people arrested during the We Volunteer shrimp sale, claiming that they will join the gathering or try to run.

At 23.35, iLaw reported a loud, explosion-like sound was heard near the old Government Lotterry Office, close to We Volunteer's location, and that police and medical personnel are now present in the area.

According to iLaw, one person was found to be injured after the explosion: a 15-year-old girl who came to watch firework with her family and stopped to buy grilled squid near the old Government Lottery Office. She has been taken to the hospital by the We Volunteer protest team.

At 23.55, We Volunteer announced the conclusion of their activities at the old Government Lottery Office. They also issued a statement earlier calling for the release of the 16 arrested people, saying that, if the group is not released tonight (31 December), they will be escalating their activities to pressure the officers.

On Saturday (2 January), the 14 We Volunteer members arrested on 31 December were taken to the Dusit Municipal Court for a temporary detention request.

TLHR said that the court approved the requests. However, they were later granted bail with a security of 20,000 baht each, and have been released.