Around 60 villagers from Chana District, Songkhla Province, travelled a thousand kilometres to Government House in Bangkok to demand the cancellation of a controversial industrial project in their area. They met pressure from police who were facing off against pro-democracy protesters, which had repercussions on their protest too. 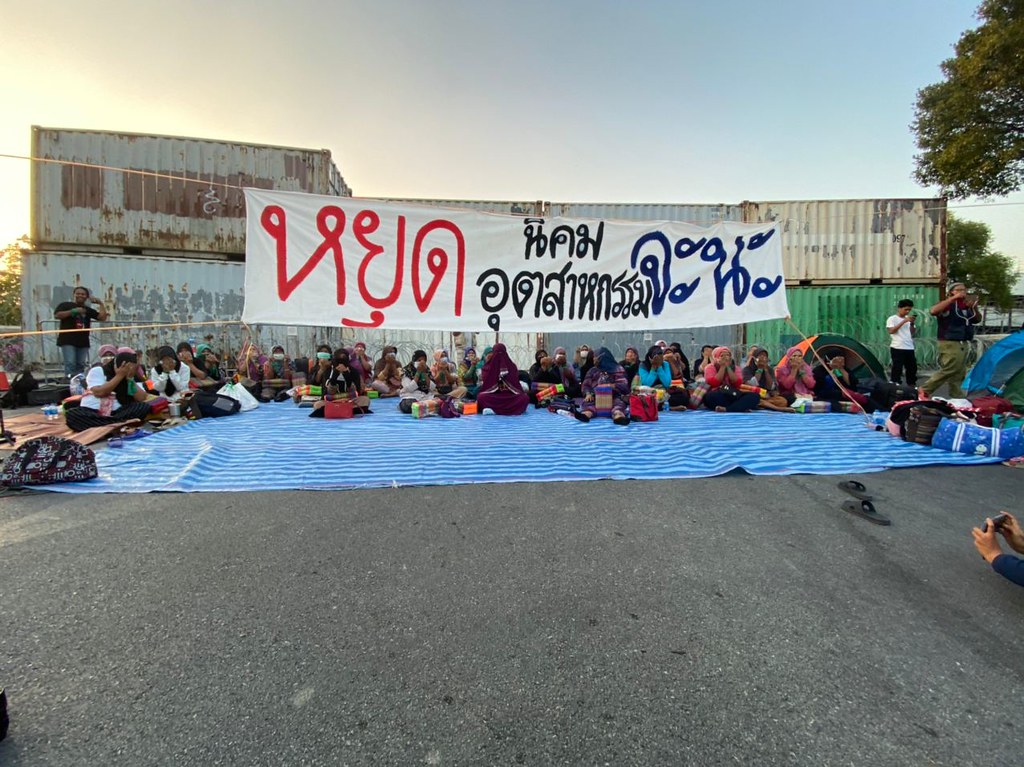 On the afternoon of 10 December, the villagers arrived at the Chamai Maruchet Bridge, 50 metres away from Government House, where containers, razor wire and riot control police had been deployed to handle the nearby rallies already called by pro-democracy protesters and disabled people. They decided to set up camp in front of the barricade.

The villagers from Chana have 2 demands, and unless they get a satisfactory response from the government, they vow to stay put:

The protesters at night prayer.

The Chana industrial project was approved by a cabinet resolution at the last cabinet meeting of the junta government which was installed after the coup in 2014. According to the Bangkok Post, the project aims to construct an 18-billion-baht industrial estate on 16,700 rai of land. The area covered 3 subdistricts with 1,500 residents.

The project is controversial because of questions about the public hearing process where those who opposed the project out of many concerns, including its impact on livelihoods, homes and the environment, were barred from attending hearings.

At 17.37, Supat Hasuwannakit, Director of Chana Hospital, who expresses support for the protesting villagers, posted on Facebook that Pol Col Atthawit Saisueb, Deputy Commander of Metropolitan Police Sub-division 1, told a leading figure in the Chana protest that they should return on Monday to submit their petition to the government. The villagers rejected this.

Many media arrived at the scene in the evening to cover the situation. It is reported that the protesters have retroactively submitted a protest announcement in line with the Public Assembly Act. So staying in place should not be a legal problem.

The situation intensified at 21.10 when the protesters who had just finished a protest at the 14 October Memorial and the Ministry of Social Development and Human Security (MSDHS) decided to march to express their support for the people of Chana.

Pol Col Atthawit was at Nang Loeng intersection but refused to be interviewed. He told one observer that it was not good for the protesters with another agenda to mix with the Chana people at night time.

During the negotiations between the Chana representatives and Atthawit, the protesters broke through the barricade and finally made their way to the protesters from Chana. The police then responded by deploying around 200-300 riot control police equipped with batons, shields and body armour. They confronted the protesters at Nang Loeng intersection without any violence.

However, a water cannon truck was seen parked with its engine running in front of Government House, behind the barricade of containers . The people in the vicinity said the truck shot a blast of water into the canal.

At 22.00, Jatupat ‘Pai Dao Din’ Boonpattararaksa, an activist who had joined the march from the MSDHS and who has demonstrated on environmental and natural resources issues in the past, gave a speech in support of the Chana people. He said the pro-democracy protesters made their way to meet them to express support in whatever way they could. If there is a crackdown, they will be there to help.

Jatupat then dispersed the protest, urging people to leave to allow the villagers from Chana to sleep. Some protesters could be seen hanging around for a while, exchanging opinions with the villagers before leaving. The tension decreased significantly after the protest dispersed.

It is worth noting that the police have been using the tactic of container barricades whenever a pro-democracy protest or activity is announced near Government House, which is located near other monarchy-related venues like the Crown Property Bureau (CPB) office, the equestrian statue of King Chulalongkorn and various palace complexes.

The first time that the container tactic was used was on 25 November when protesters announced a protest in front of the CPB. The following night, containers, razor wire and riot control police were heavily deployed and a large area around the CPB was sealed off from traffic.