Home » Occupy Thammasat: What to expect at 19 September protest

Occupy Thammasat: What to expect at 19 September protest

19 September is the day another large protest is planned in Thailand. The organizers say there may be 50,000-100,000 protesters gathered at Thammasat University’s Tha Phra Chan Campus. However, the university administration has prohibited them from entering the campus, claiming the students will not follow its rules. With its liberal tradition at stake, members of the Thammasat community and public figures debate what is the right thing to do.

Thammasat University was founded on 27 June 1934, the same day that the interim democratic constitution first came into force after Khana Ratsadon (People’s Party) staged a democratic revolution on 24 June 1932. Pridi Banomyong, the university’s founder and the leader of the civilian wing of the People’s Party, wanted to popularize higher education in Thailand because at that time it was exclusively for the royal elite. In his own words, “[a] university is figuratively an oasis that quenches the thirst of the citizens.”

Thammasat has been a major venue for political freedom following its founder’s intention. It has been the site of important protests throughout Thai political history and produced statesmen like Puey Ungphakorn and Sanya Dharmasakti. Praised for its liberal tradition, the university has a motto that Thammasat has freedom in every square inch. Students and professors also often say “I love Thammasat because Thammasat teaches me to love people.”

However, it is questionable if Thammasat University will continue this tradition.

On 9 September, the United Front of Thammasat and Demonstration held a press conference saying that they would hold a protest on 19 September at Thammasat University, Tha Phra Chan Campus. Student leader Parit Chiwarak said that they will not lower their demands about monarchy reform. “We have opened the sky wide for society,” said Parit. “And we will not let anyone put a limit on our movement again.” 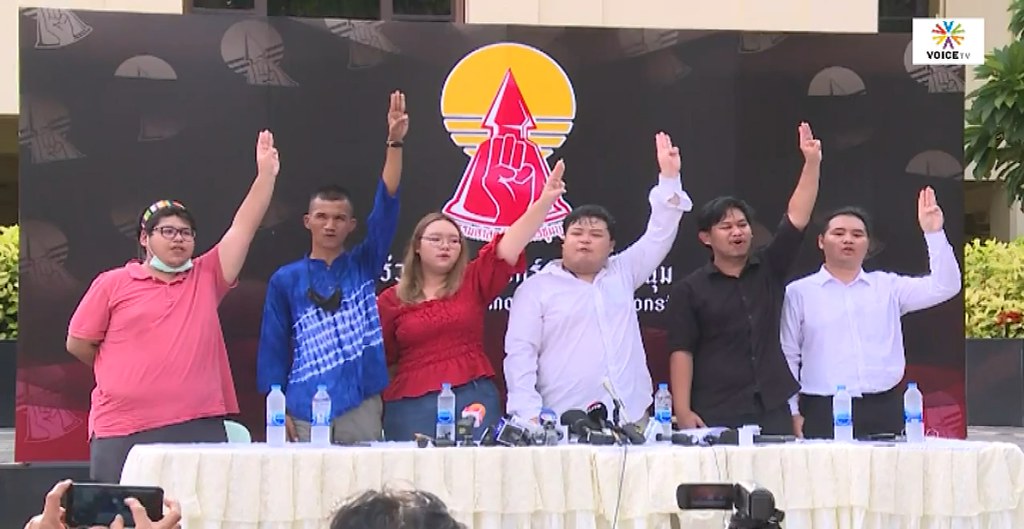 United Front of Thammasat and Demonstration held a press conference saying that they would hold a protest on 19 September. Source: Voice TV

The student group had earlier held a controversial protest on 10 August at Thammasat’s Rangsit Campus. Calling for monarchy reform, they read a 10-point proposal and displayed parody memes of political exiles along with adapted texts, fonts, colours, and frames normally used for the monarchy. Student leaders at the protest that day were facing arrest warrants for violating the sedition law, including Panusaya Sithijirawattanakul, Parit Chiwarak, Panupong Jadnok, Natchanon Phairot, Thanawat Chanphluek, and Sitnon Songsiri.

Some of them have been detained but later released on bail. They continue to fight while they still have time outside prison. Panusaya Sithijirawattanakul said there may be around 50,000-100,000 protesters who will join the demonstration. The student leaders have asked protesters to prepare to stay overnight. If they have enough people, they will occupy Sanam Luang and at 8.00 am they will march to Government House to hand in their demands to the government. They will also prepare to close Ratchadamnoen Klang Road between Thammasat University and the Democracy Monument for people to hold protest activities.

However, on 3 September the Rector of Thammasat University Assoc Prof Gasinee Witoonchart released an announcement that the University will allow political protests on condition that:

(1) They are within the scope of the law and the constitution.

(2) They are organized by activity groups belonging to the university or by outside or ad hoc groups guaranteed by advisors on the faculty.

(3) There is a written agreement between the students, the organizers, the police or responsible state authorities, and the university specifying the content and method of the protest under the law and appropriate measures to guarantee the welfare and safety of the students.

On 10 September, Parit responded that they will continue to protest anyway. “Even though the university administration will not allow use of the space of Thammasat University, Tha Phra Chan Campus, for protest, we will still hold the protest at Thammasat,” Parit posted on Facebook, “because Thammasat belongs to people, not a handful of lackies who serve a dictator.”

On 11 September, Panusaya Sithijirawattanakul laid a wreath before the statue of Pridi Banomyong, the founder of Thammasat University, to mourn the lost democratic spirit. She was ready to talk with the university administration. But if there was no response, they would “cut the chains” and “break down the doors” to get into the university to hold the protest on September 19. “We will not negotiate over any prohibition against speaking about monarchy reform,” said Panusaya. “And we will not stop speaking just because someone comes to prohibit us from speaking.”

Assoc Prof Dr Anusorn Unno, a sociology lecturer at Thammasat, said on 11 September that he disagreed with the university administration. As an advisor who approved the protest, he said the students have explained the content and method of protest in written form. And in practice, negotiation with the police cannot start unless the university first gives permission.

Thammasat University set up a committee to look into the events on 10 August. At the end of August, the committee’s findings said that the university and police did not know in advance about the demands for monarchy reform. The university and police had tried to avoid direct confrontation by collecting evidence for later prosecutions for illegal activities.

The committee also suggested the university should come up with detailed and strict guidelines so that students can exercise freedom of expression under the law and the constitution. It also suggested that all parties should avoid using the term “Thammasat” in a stereotypical way to prevent any widespread controversies.

The ability to speak about monarchy reform is still a subject of political debate. While the Thai authorities and pro-monarchy supporters see it as illegal under the sedition law, other sections of Thai society think that it should be open for discussion. On 12 August, more than 140 lecturers said that the opinions of the protesters are within the boundaries of the constitution and the basic principles of universal human rights and democracy.

Alumni and former professors also got involved in the debate. Four hours after Panusaya laid the wreath, a group of 30 Thammasat alumni gathered at the Faculty of Liberal Arts to discuss drafting a letter in support of the university’s decision. Kaewsan Atibodhi, a Thammasat alumnus from the Faculty of Law, said the meeting was about whether there should be a discussion about monarchy reform or whether the prime minister should resign. They just thought that the upcoming protest was unconstitutional. 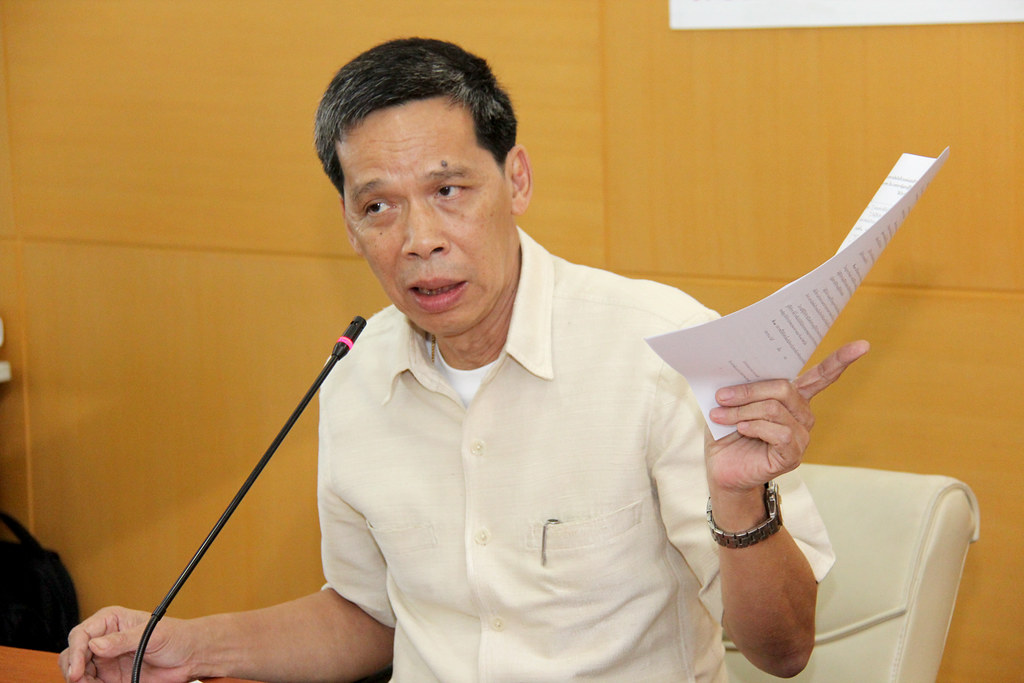 “In our status as people of Thammasat, we do not want to see Thammasat as the headquarters of constitutional violations and the destruction of the country,” said Kaewsan.

He claimed that the purpose of the protest was ‘to throw a mob into Government House’ and was not an exercise of the right to freedom of assembly according to the intention of the constitution. He also said that the protesters were not peaceful as they spread hatred online and became more aggressive when they went into the street. “If they do it well, they’ll be the Red Guard or Nazi Youth [probably a reference to the Hitler Youth (Hitler-Jugend)].”

Kaewsan also said that if the protests continue, there may be violence like in May 1992. He also suspected that there is someone behind the student movement as they may be using the university to avoid coming under the Public Assembly Act only to protest at Sanam Luang and Government House later on.

On that day Kaewsan talked Rector Gasinee, saying that he would come back to hand her a letter on 16 September. As promised, he returned to hand Gasinee a letter with the signatures of 2,924 supporters. He also laid a bunch of flowers before the statue of Pridi Banomyong. Then he asked the press not to report that the university was not neutral.

Kaewsan Atibodhi is a former lecturer at the Faculty of Law and a former Vice Chancellor of Thammasat University. He was also a former member of the Assets Scrutiny Committee, an independent body established after the military coup in 2006 to investigate corruption in the Thaksin Shinawatra government. In 2014, he made an appearance on stage at a protest of the People's Democratic Reform Committee which led to the latest military coup.

Other public figures have sided with Kaewsan, including Suvinai Pornavalai, a former Thammasat economics lecturer and current academic head of the Thai Move Institute. Senator Somchai Sawangkarn who never studied at Thammasat also posted on Facebook that the administration should close the university for 4 days like Chulalongkorn University when red-shirt protesters threatened to occupy it in 2010 (when at least 92 people were killed on the streets).

Katerut Laothamatas, a government MP, also posted on Facebook that people should not monopolize Thammasat for political gain. He claimed to be a member of the Thammasat community despite not graduating or teaching at Thammasat. His father, Anek Laothamatas, once taught at the University’s Faculty of Political Science however, before he left to join the establishment and become the Minister of Higher Education, Science, Research and Innovation in Gen Prayut Chan-o-cha’s government.

Kaewsan’s move also faced much criticism, however. Opposition MP Wiroj Lakkhanaadisorn did not claim to be a member of the Thammasat community when he jumped into the debate. He said that Kaewsan should explain the use of Thammasat by a group of alumni to hold protests which led to the military coup in 2014, because the upcoming protest is much more in order. He also said Kaewsan’s group should apologize to the spirits of Prof Pridi Banomyong and Prof Puey Ungphakorn.

On 14 September, a former dean of the Thammasat’s Faculty of Law and Pheu Thai party-list MP candidate Panus Tussaneeyanont wrote a letter countering Kaewsan’s accusations and saying that he should not be seen as representing all Thammasat alumni. Opposition to the university decision also came from former rector Prof Charnvit Kasetsiri and alumni who were students during the 6 October incident.

The debate among the Thammasat community and public figures is a preliminary struggle over the legitimacy of the upcoming protest which will be tested on 19 September. The result will be revealed in the protest outcome. How many will join? Will they be seen as legitimate? Will they be strong enough to get into the campus? How will the authorities react? The Thammasat community is just one group contributing to these questions. Ultimately, it is up to the Thai people to decide.

Update: On 17 September, the Faculty of Law released an announcement cancelling all teaching on 19-20 September. The Faculty building will also be closed.

According to the announcement, government security agents have asked Thammasat University to close the campus on the day of the protest. Only the gate on Phra Athit Road will be open.

People must show a university employee card and ID card and tell the security guards why they need to get into the University. The announcement was signed by Assoc Prof Dr Munin Pongsapan, Dean of the Faculty of Law.