7 labour groups have announced "We are no longer willing to tolerate this." Workers will fight alongside students and youth to create a democratic society in Thailand for the sake of present and future generations. 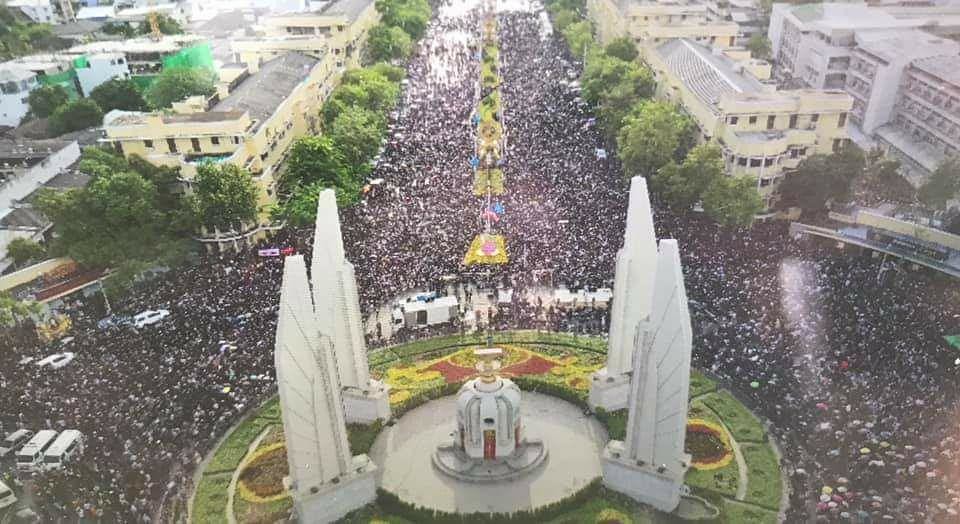 The statement was published on 16 August 2020, in line with the mass protest at the Democracy Monument, Bangkok at the same day.

The Labour Network for People's Rights is a coalition of organized labour groups that believe in democracy and are no longer willing to tolerate dictatorship in Thailand. Since the government led by General Prayut Chan-o-cha came into power, the economy has taken a downturn and workers everywhere have faced tremendous hardship.

Even before that, our economy had already failed us. Yet the authoritarian government has managed to make things worse. For example, in Bangkok, government-promoted sidewalk regulations destroyed the livelihood of countless street vendors. Furthermore, the pro-capital Minister of Labour has led the effort to suppress our minimum wages for years. In the South, an industrial estate zone has been imposed despite opposition, putting people's livelihoods and the environment at risk. On top of that, the government has abused the emergency decree to suppress our rights to assembly and freedom of expression. It is clear that the government is willing to use the law to silence the poor but when it comes to the rich, the law is nowhere to be found. Time and again, the government has colluded with companies' unfair layoffs and union-busting by looking the other way. A case in point is the millionaire who committed a crime in broad daylight and managed to get away with it. In light of the Covid-19 pandemic, the working poor has hit rock bottom. The government does nothing while companies are using the pandemic as an excuse to close down businesses and fire workers and union leaders without compensation or taking the steps required by law.

The government has also failed to handle Covid-19 economic relief and recovery measures. Due to bureaucratic red tape, those who need relief the most are the ones who cannot access the funds. Such failed management has only made things more difficult for us. The unemployment rate is higher than it has ever been. Graduating college students and recent graduates have no job prospects in this labour market. Accordingly, we believe that this government no longer has legitimacy to govern our country.

Millions of Thais have lost their jobs and fallen into dire poverty. Tragically, many of those unable to endure the burdens of household debt have taken their own lives. By contrast, the junta and its cronies continue to waste our tax money—feasting while we are starving to death. All 250 senators-- not elected by the people but handpicked by the junta—have used their newfound power to give themselves exorbitant raises. We are calling for a serious look at how the junta and its cronies are spending our tax money.

While pro-junta politicians enjoy skyrocketing incomes and luxurious lifestyles--the "perks" of appointing themselves to multiple positions--our daily minimum wage has for years stagnated at barely above 10 dollars. When the government uses slick slogans such as: "Leave no one behind" and "people-centred development," these words never become reality. The children of workers are often separated from their parents after birth, sent to other provinces because there is no daycare for our children. The luckiest ones receive a decent education, but that is rarely the case. For so long, we have had to bear with an underdeveloped and oppressive education system. As a result, when our children are grown up, they are trapped in a vicious cycle of poverty, endlessly passing on the inheritance of poverty to their own children. In short, the inequality gap widened by the authoritarian government makes it almost impossible for us to pull ourselves up the social ladder.

As working-class people, we are often subject to criminalization; the rule of law is absent when labour activists and human rights defenders attempt to speak truth to power. Many unionists, labour, community, and human rights activists, who question or criticize government projects, have been harassed, made to disappear or murdered. These incidents underscore issues of inequality and class in Thai society.

The fundamental right that our labour movements have fought for and hold dear is the democratic right to question those who hold power. All workers, factory workers and beyond, cannot work and live with dignity without exercising the basic right to question those in power— including our employers and the government—when we see actions that conflict with the interests of the people.

Therefore, we want to publicly announce our support for the demands of the youth- and student-led pro-democracy movement, and call on Gen. Prayut Chan-o-cha's government to meet the following demands:

1) Stop harassing students and citizens who participate in the pro-democracy protests. Expressing political views is a fundamental right and freedom for all people.

2) Start the drafting process for a new constitution that truly reflects the will of the people and for the people. The current constitution was primarily designed to benefit a select few and their cronies.

3) Institutionalize a comprehensive welfare scheme from "Womb to Tomb," along with progressive tax reform to reduce class inequality.

Today we have gathered here to announce that "We are no longer willing to tolerate this." Workers will fight alongside students and youth to create a democratic society in Thailand for the sake of present and future generations.