LGBT activists held a demonstration on Saturday (25 July) at the Democracy Monument in the name of gender equality, LGBT rights, and democracy, as well as calling the government out for their failure in handling the Covid-19 pandemic and demanding the dissolution of parliament. 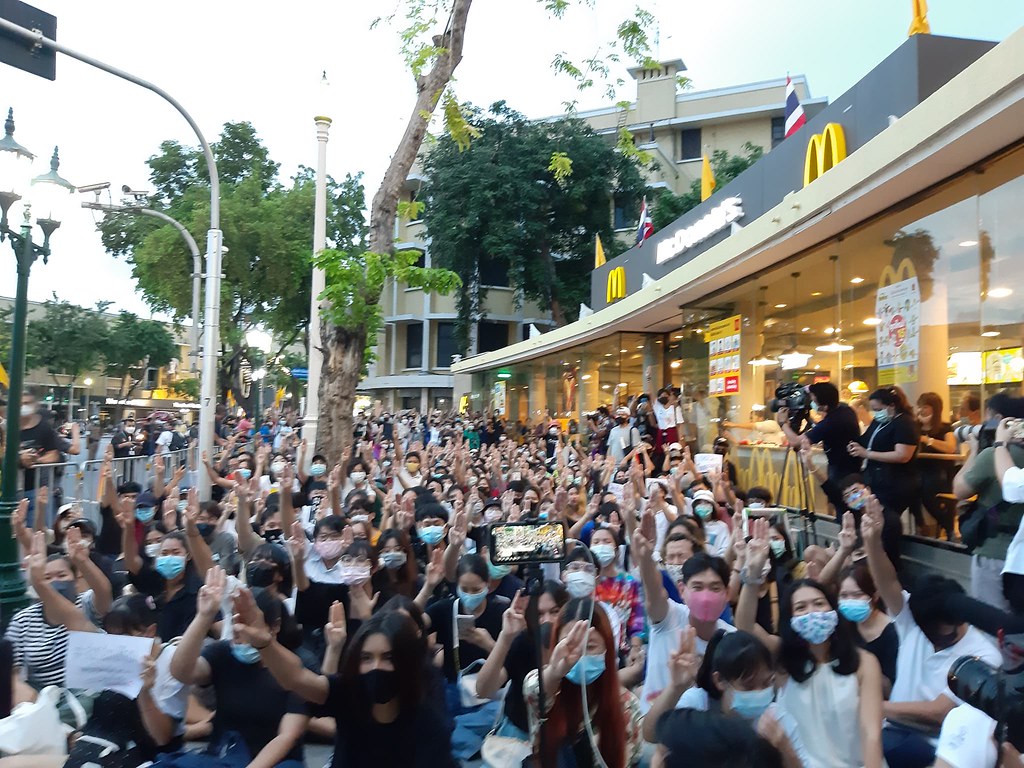 Protestors flashing the three-finger 'Hunger Games' salute, a well-recognised resistance symbol in Thailand which has so far been used in every protest since the start of this year.

The event was attended by at least 200 people under the watchful eyes of around 50 police officers.

One speaker criticized the government’s failure in handling the Covid-19 outbreak as the economic impact is severe and the government itself has put Thai people at risk of infection by recently allowing VIP guests into the country without state-controlled quarantine. 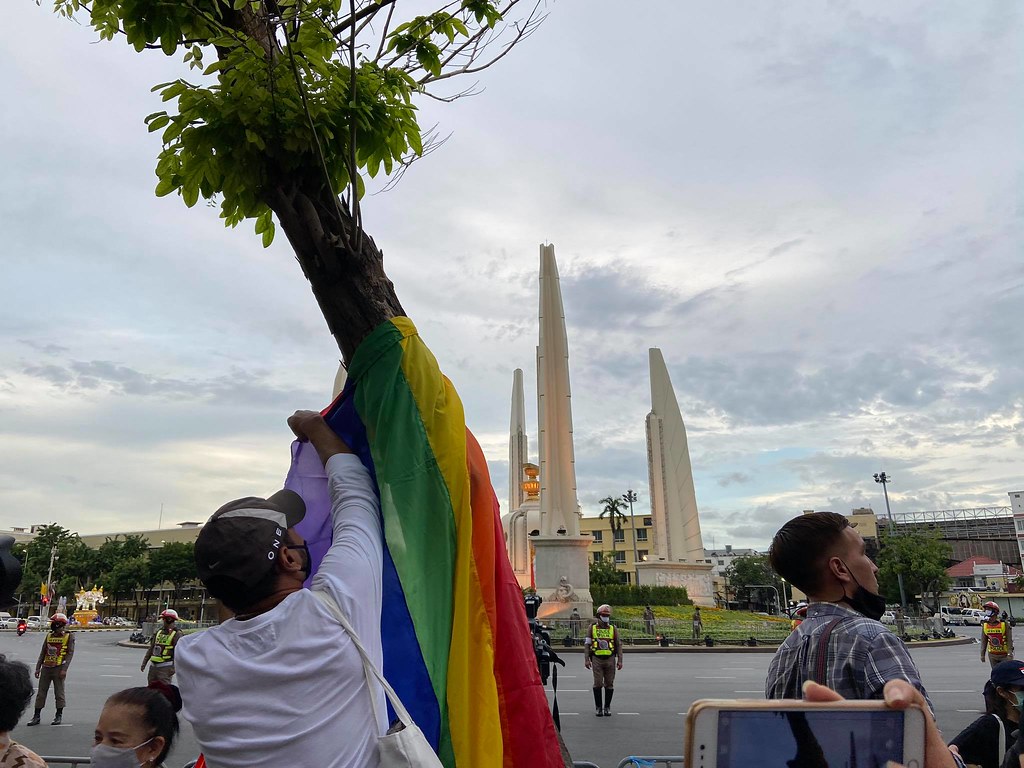 In addition to reiterating the three demands made by the Free Youth Movement at the mass protest on 18 July, which are now being echoed by protestors across the country, the organisers urged the government to push for amendments to the sections on marriage and family in the Thai Civil and Commercial Code to allow LGBT couples to legally marry, which will ensure that they receive equal rights, duties, and protection under the law.

If these amendments are made, individuals will be able to legally marry regardless of gender, and will receive the rights they are entitled to as married couples, such as being able to adopt children together, make medical decisions on behalf of their partner, and in cases where one partner dies, the other will be able to inherit from their partner and make legal decisions about their partner’s assets.

The organizers also expressed their opposition to the Civil Partnership Bill, which has been criticized for not giving LGBT couples rights equal to heterosexual couples and for making them second-class citizens and which is seen as contradictory to the principle of equality. 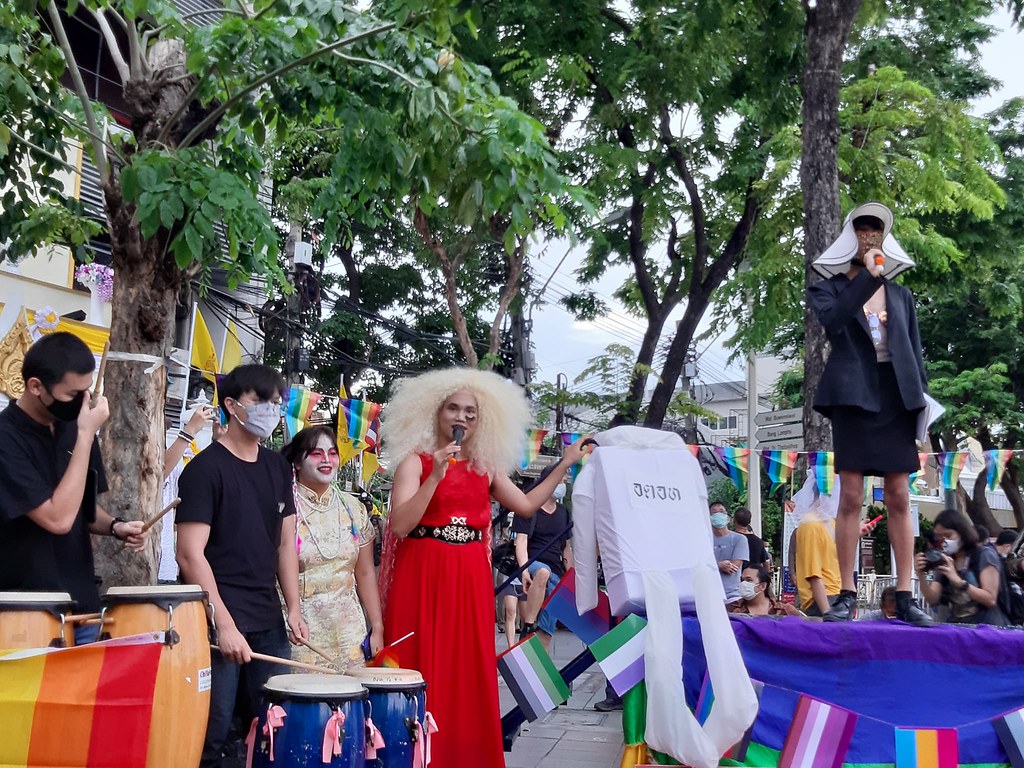 The stage at the protest, decorated with not only the rainbow Pride flag but also other Pride flags, including the lesbian, pansexual, aromantic, and genderqueer Pride flags as seen hanging in front of the stage.

The demonstrators together chanted a modified dialogue from the film “Ho Taew Taek”, a famous comedy film about the LGBT people directed by Pot Anon. The dialogue is “Tu [the PM’s nickname], you liar! Are you talking shit to the PM … No, I blame the doll” and “You chase me out of the house … is this your house?” 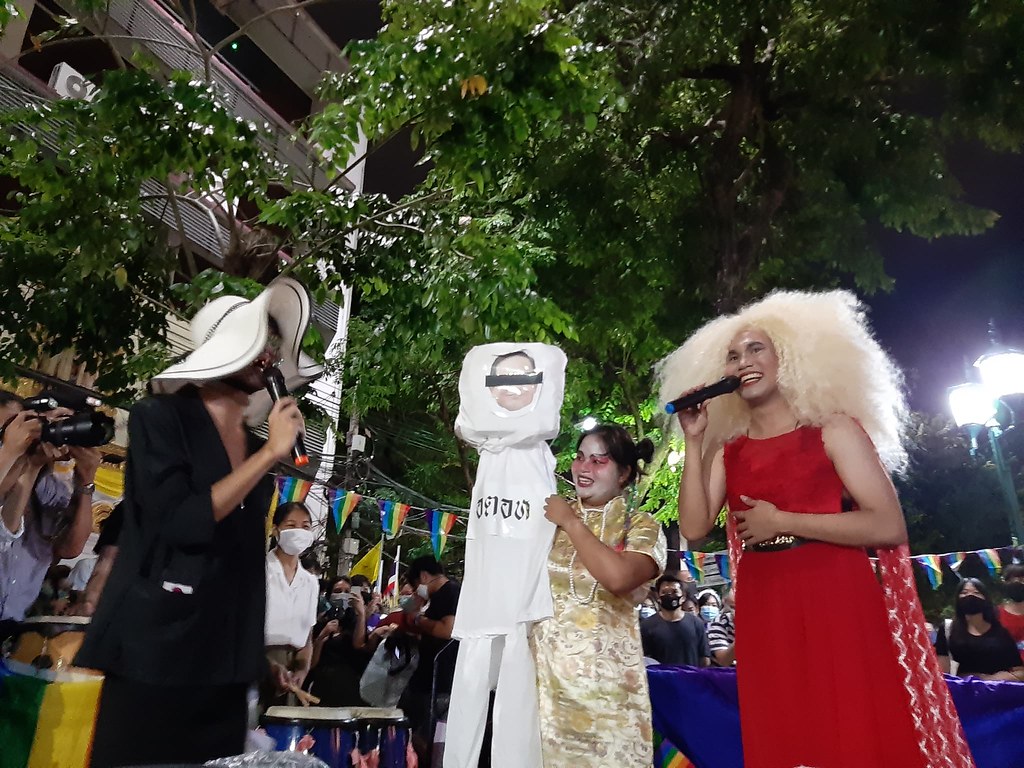 Performers during one of the sketches performed during the demonstration.

Other than performing stand-up comedy sketches making fun of the Prime Minister and the government, the speakers also sang and led the crowd in a dance using songs often sung at school and university activities, with the lyrics changed to talk about injustice and other political issues. They also invited the police to join in the dance but none took part. 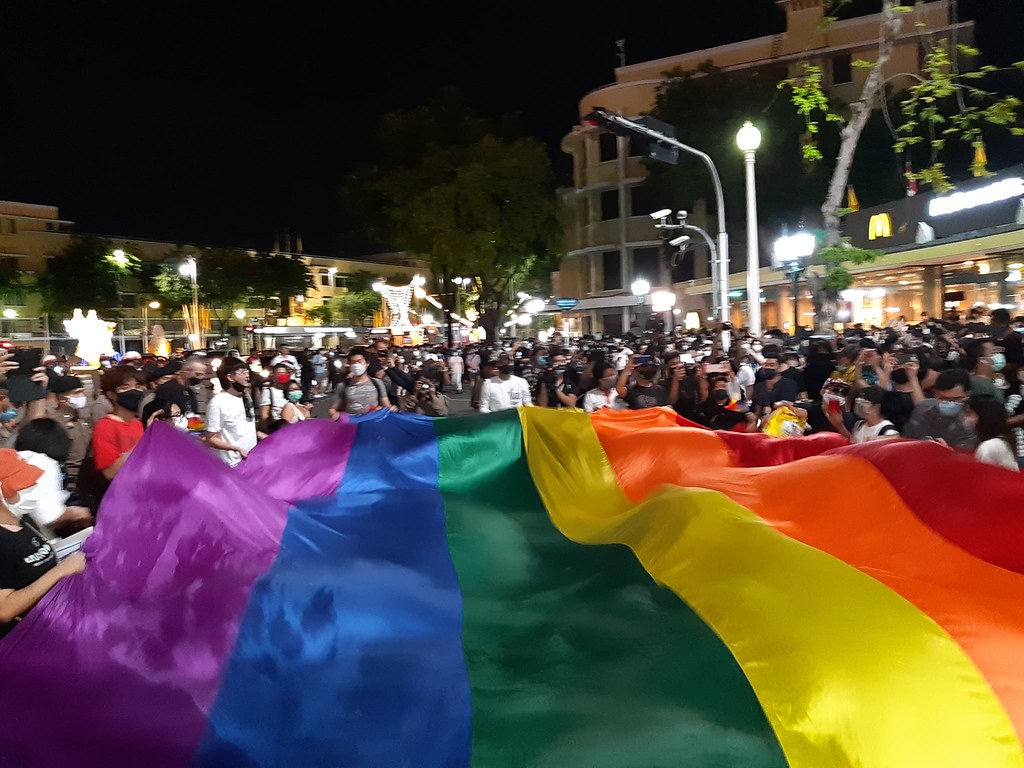 Move Forward Party MP Tanwarin Sukkhapisit, who is transgender and part of the team that drafted the bill to amend the Civil and Commercial Code , said “the LGBT people have always had their dreams murdered and been cheated of their humanity, so it is now time, as we have the first transgender MP who got into parliament. We are therefore letting everyone know that we exist, that we really are human, so they have to treat us as equal.”

“It’s time for Thailand to make a new page of history and create true equality for Thai citizens, by taking out the words that mark gender and leaving only the words ‘person and person’, by no longer judging others’ humanity by their gender or their sexuality, because everyone, regardless of gender, is human and is entitled to equal human rights,” Tanwarin said further.

One of the protesters who dressed up as one of the characters in “Ho Taew Taek” said they came to the protest because they want to call for the right to freedom of expression, and to express that thinking differently is not wrong. They also said that, regarding marriage equality, they would like the term “person” to be used instead of “man” and “woman,” and that they wanted people to see beyond gender. 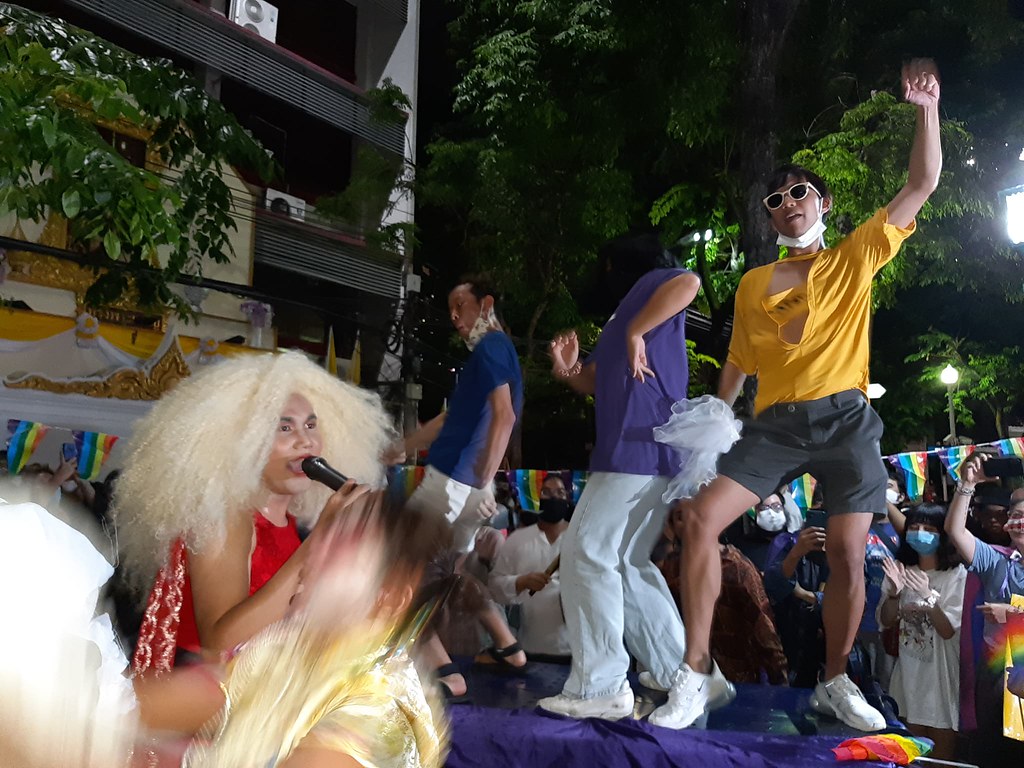 The speakers leading the crowd in a dance activity

Besides the demands made by the organizers, some participants also asked for equal rights for sex workers.

Pin Suda, who held a placard saying “Legalize sex work”, expressed her concerns regarding sex workers whose situation has worsened during the outbreak. As sex work depends heavily on the travel industry and intimacy, they should have the same rights and legal protection as other kinds of workers. Pin also emphasized that sex work is important in bringing money into the country. Although the government and older people want to turn a blind eye, Pin said they should protect sex workers as they are exposed to many risks such as violence and fraud.