Students at Walailak University organized a flashmob on Tuesday 21 July in support of the Free Youth Movement, while a group of students organized a ‘garden viewing’ event at the Democracy Monument. 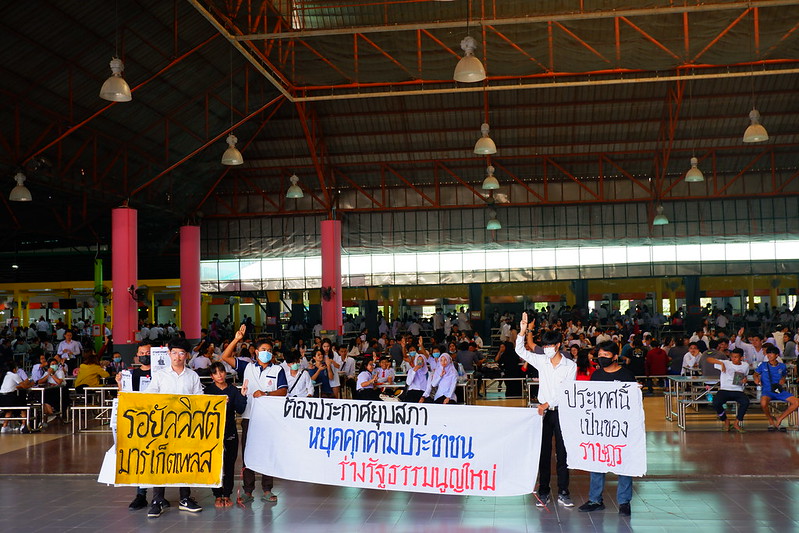 Students with their protest signs. The one in the center states the three damands made by Free Youth Movement, while the one on the right says "this country belongs to the people," and the one on the left says "royalist marketplace," the name of a Facebook group where people share their criticism of the current government and the monarchy.

At noon on 21 July, the Walailak University branch of the Student Union of Thailand (SUT) organized a flashmob in a university canteen to show their support for protestors across the country and to rally behind the Free Youth Movement’s demands for the dissolution of parliament, an end to harassment against those who exercise freedom of expression, and a new constitution.

Participants in the flashmob held signs with messages such as “This country belongs to the people” as well as the ‘missing person’ posters of victims of enforced disappearance, which were also seen at the mass protest on 18 July.

The event took place during the lunch break. The organisers did not give speeches, but invited those in the canteen at the time to join them in shouting “dictatorship shall fall, democracy shall prosper.” Their request was answered by the around 100 people in the canteen at the time. Participants also flashed the three-finger ‘Hunger Games’ salute, a well-recognised symbol of resistance in Thailand.

Suchat Sinnarong, one of the organisers, said that the event was to show support for anti-dictatorship protestors, as well as for the Free Youth Movement’s demands. Suchat said that there has been no harassment from the university or from state authorities, and that he and his friends are not very concerned and that they will continue their activity even if they are harassed.

“If there are threats from the university, it is normal for them to try to stop us. We feel used to it, and we still insist that we will keep fighting, because if we don’t keep fighting, we will keep being threatened like this and nothing will change, and what we are doing today, we are fighting for democracy, so that the country can move forward, and not sink because of this government’s failure. We want dictatorship to end in our generation,” Suchat said. 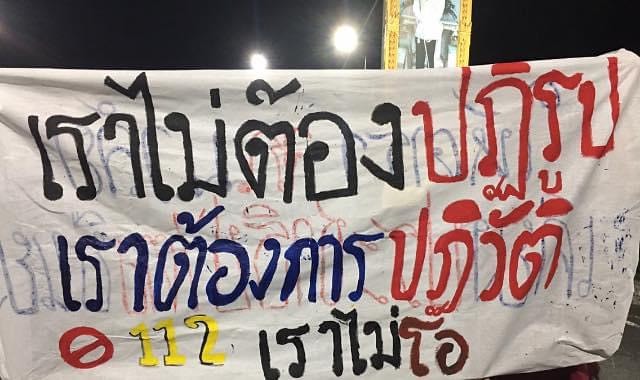 A banner saying "we don't want reform, we want a revolution" which was put up in a Walailak University canteen on 18 July before disppearing the next morning.

The group had put up a banner saying “We don’t want reform, we want a revolution” in the university canteen during the night of 18 July, but the banner had disappeared by the next morning. 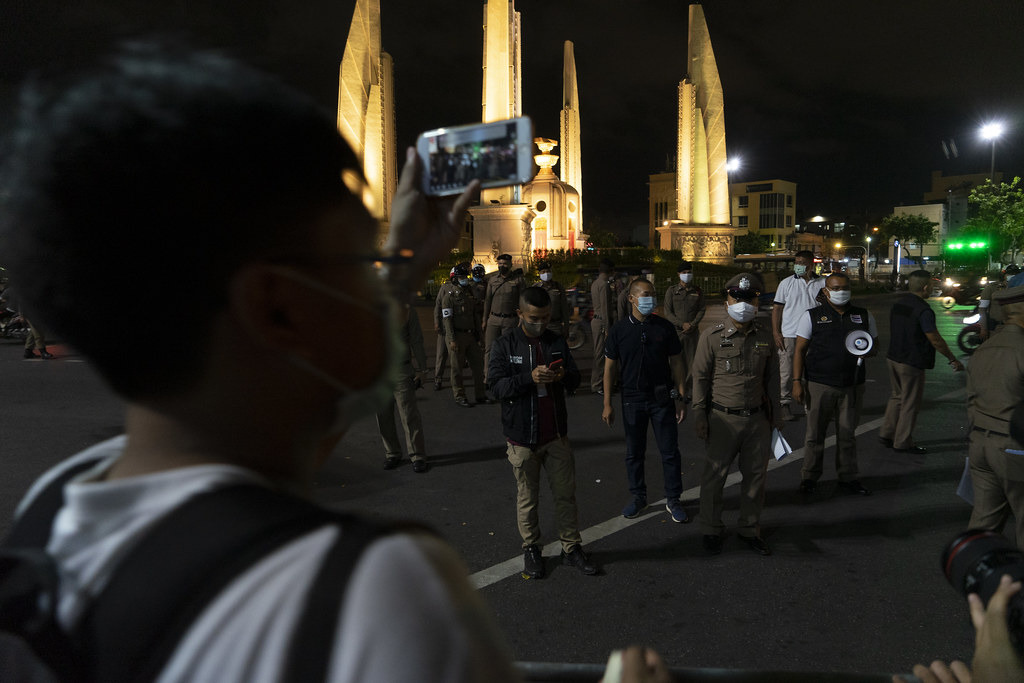 Siraphop Phummphuengphut live-broadcasting the 'garden viewing' event while police officers stand in front of the crowd.

Meanwhile, at 20.00 on the same day in Bangkok, a group of students gathered for a “garden viewing” activity at the Democracy Monument. The garden was set up by the Bangkok Metropolitan Administration (BMA) hours before the mass protest on Saturday (18 July) and filled the area around the Democracy Monument.

Prior to the start of the event, police officers blocked the footpath in front of McDonald’s with metal fences and ordered the participants to stay on the footpath and not move onto the street. Around 20 – 30 police officers, both uniformed and plainclothes, were present in the area.

Siraphop Phummphuengphut, a student at the Srinakharinwirot University who organized the event, said that the garden is a waste of taxpayer money and is used to obstruct gatherings of people who are calling for democracy, when the money should be used for other purposes which have more benefits.

Before the conclusion of the event, Siraphop asked the participants to join him in chanting “the garden is so beautiful” and “dissolve the parliament”.

The two events are the latest in the wave of anti-government protests springing up across the country since the mass protest on Saturday (18 July), which was the largest protest since the government declared a State of Emergency in March. Two other protests took place in Ubon Ratchathani and Chiang Mai on Sunday (19 July) in support of the Free Youth Movement, who organized Saturday’s protest, with at least 24 other rallies planned to take place in different provinces in the coming weeks.