Thai people came out to protest against dictatorship because they have been through enough with the problems and injustices that occurred under Gen Prayut Chan-o-cha’s administration. 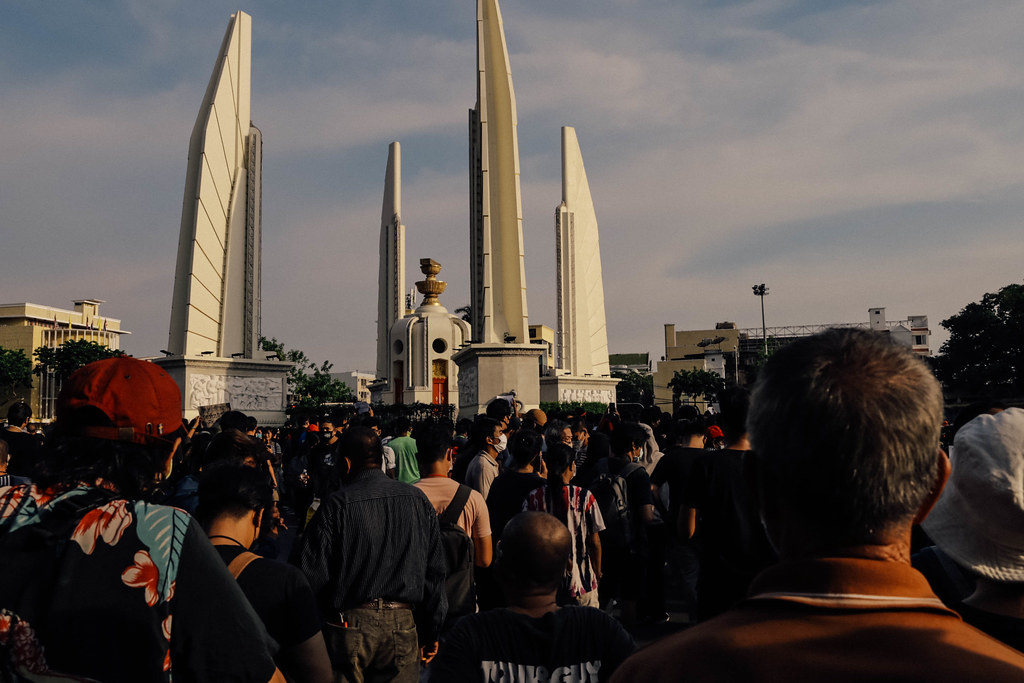 People gathered to protest at the Democracy Monument on 18 July.

Prachatai spoke to five protesters on 18 July at the protest organized by the Free Youth Movement and its networks. Protesters demanded that the government dissolve parliament, put an end to state harassment of its citizens, and draft a new constitution.

The interviewees are an independent actor, a journalism student, a design student, a Thammasat University student and a citizen. They explained their reasons for joining the activity, their concerns and their hope moving forward.

The government is good at framing protesters as criminals

This is not the first political protest the independent actor has attended, but in the past it was as a member of the press. He said he did not plan to join this one as he thought it was enough to watch it live on social media but when he was watching it live, he felt the need to come out to experience it.

He said his greatest concern was how the other side would handle the situation, as they have full power to control us because the protesters obviously violated the rules that the authorities wrote.

“They are so good at framing us as criminals,” he said.

The actor said he expects that people will not take this as an event just for its symbolism but he understood that it is not only up to him.

He also pointed out that there is no one who has not been affected by this government.

The event could be bigger with more impact

The journalism student said this event did not have enough impact to gain worldwide attention compared to the Black Lives Matter movement. She suggested that everyone keep the momentum going because she believes just this single event could not lead to any change.

However, she said the protest was a good beginning.

While she wants to see more people come out, she said people who stayed at home, for different reasons, are not useless because they can also show support and spread news about the protest online.

Despite having different political views from her parents, she came out to protest because she saw that this issue is very serious and she thought people have been through enough.

The design student from a university in Bangkok said this protest shows that there are many people who are not okay with what is going on in the country.

“At first, we only see [the movement] in social media, but now we see a number of people which I think is more concrete, more than before,” she said.

The student said the online movement is important as it can spread information to gain worldwide attention and support, but she still encourages people on social media to show up in the real world to prove wrong the other side’s insults that they are only “internet trolls”. She pointed out that it is all about numbers.

Previous events were only flash mobs, and she said she wanted to see this event as the beginning of even more advanced nationwide protests.

Eff, the student from Thammasat University who has led protests at his university, said all the bad events that the Thai people are living with happened because of the failure of Gen Prayut Chan-o-cha’s administration, both in terms of politics and the economy. He said there have been many people who died and were forcibly disappeared. He said he saw no hope for his future and he felt the need to fight for it.

“As a person who must be the future of the country, as a member of the new generation who will have to inherit living in this country, I needed to come out to solve problems in this country that a few adults and a few groups created,” Eff said.

Eff does not know if the protest will be taken into the next level, but he believes that this event is a small contest that might be small today but will become larger in the future.

“I’m not worried, because if it’s assumed that I am worried, our future will be gone,” Eff said.

One of the protesters said she is unhappy with Gen Prayut’s administration and she would not be patient anymore. She wants to see real democracy in Thailand. She said she is ready to move forward with the student leaders.