Before a march from the United Nations building to Government House on 13 July to demand that the Prime Minister endorse the National Pensions Bill, the Welfare Watch Network hosted a picnic, with representatives from parliament and a Deputy Prime Minister joining in. 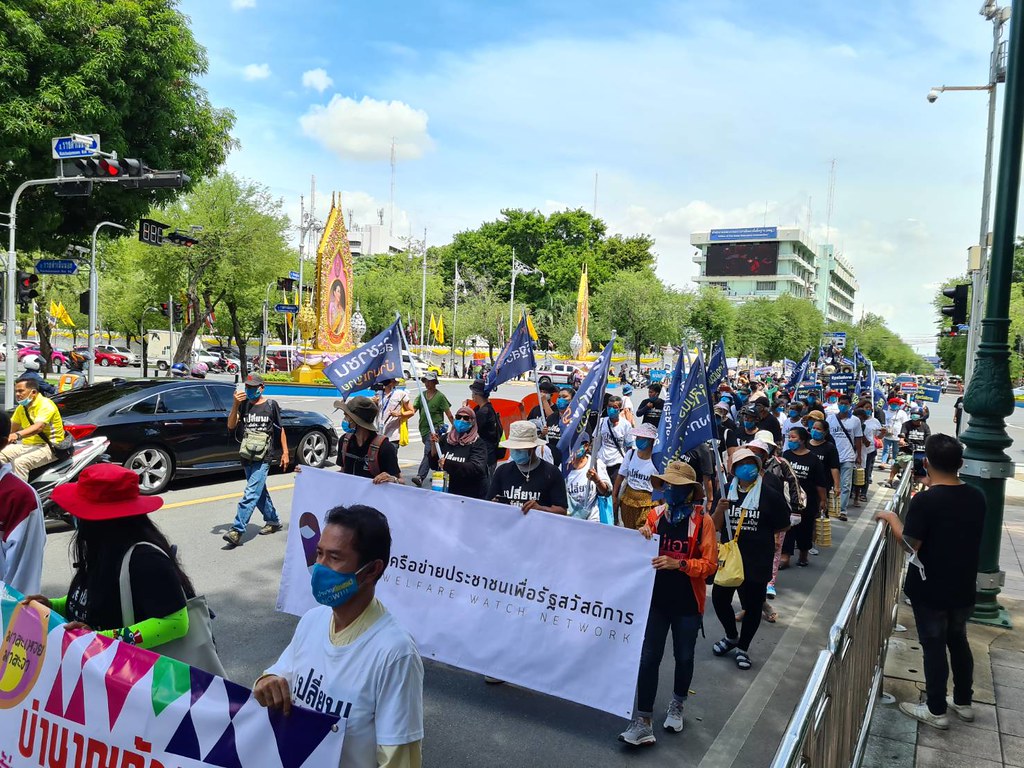 The demonstrator marched toward the Government House.

At around 9:00, over 200 people gathered in front of the United Nations building before a march to Government House. Everyone was handed a shirt that read “Change allowances to pensions for all” and a mask that said “Pensions for all, now.”

Their picnic in front of the United Nations building included speeches from network representatives and performances from civil society organizations including a Thai musical band, Commoner Thailand, and dancers from Swing Thailand.

Before the activity started, Nang Leong Police Station told Nimit Tienudom, a representative from the Welfare Watch Network, that it might violate the Emergency Decree and that he and others might later receive a police summons.

Nimit said the purpose of the activity was to get the signature of Prime Minister Gen Prayut Chan-o-cha to back the National Pensions Bill. The bill was signed by over 13,000 people and has been under the Prime Minister’s consideration for over five months.

“If we have basic pensions, it would be a guarantee that no one would go bankrupt from poverty when they turn 60. It is like an important basic structure in life, like the basic health insurance system, which is another pillar of social support,” Nimit said.

“And If we have a government that listens to people, we hope that the Prime Minister signs off on this bill to let it go for consideration by the House of Representatives. As regards political parties that campaigned on pensions for all, we would like them to quickly reconcile their drafts with the people’s.” 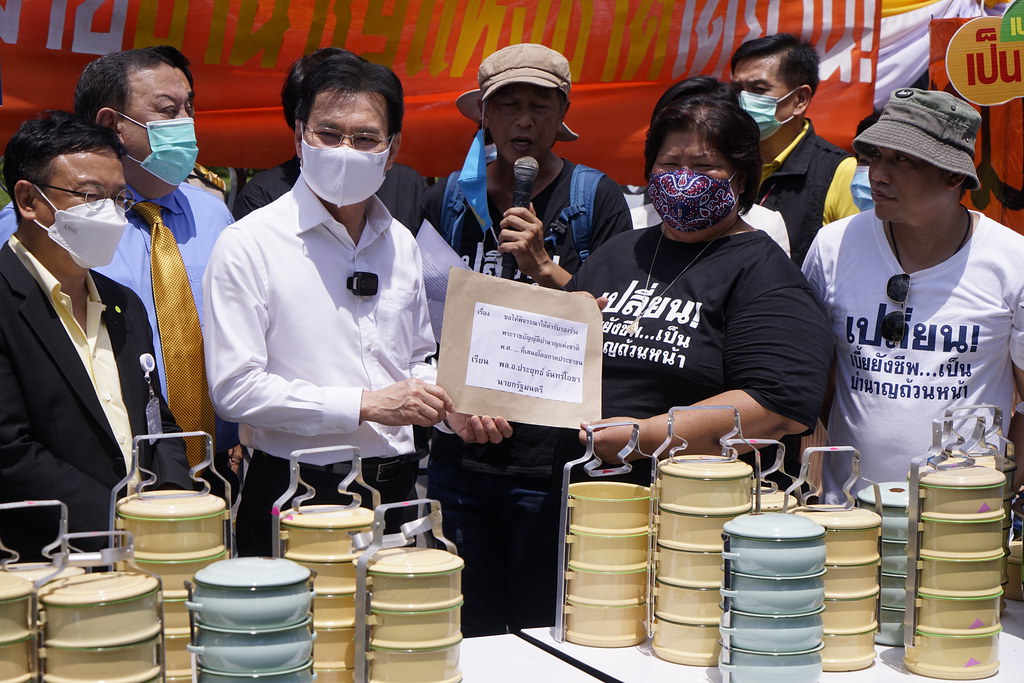 Jurin (left) received a letter from the demonstrator representative.

Jurin Laksanawisit, Deputy Prime Minister and Commerce Minister, met the demonstrators in front of Government House at 11:35 to receive the letter and a pinto. Jurin said he will make sure to pass the people’s concerns to the Prime Minister, Finance Ministry, Social Development and Human Security Ministry and his party, the Democratic Party.

As a Deputy Prime Minister and Democratic Party leader, Jurin said pensions for all is something his party has obviously been advocating. Jurin said the existing allowances for the old started under a Democratic Party administration . He also said that one of the policies which the party registered with the Election Committee of Thailand was pensions for all, which he authored.

President of Four Regions Slum Network Nueangnit Chitnok  said a 3,000 baht monthly pension would be a good beginning to narrowing the gap between the wealthy and the poor. The elderly would have better lives in retirement. Their children would not have to worry about working to support their parents or grandparents. 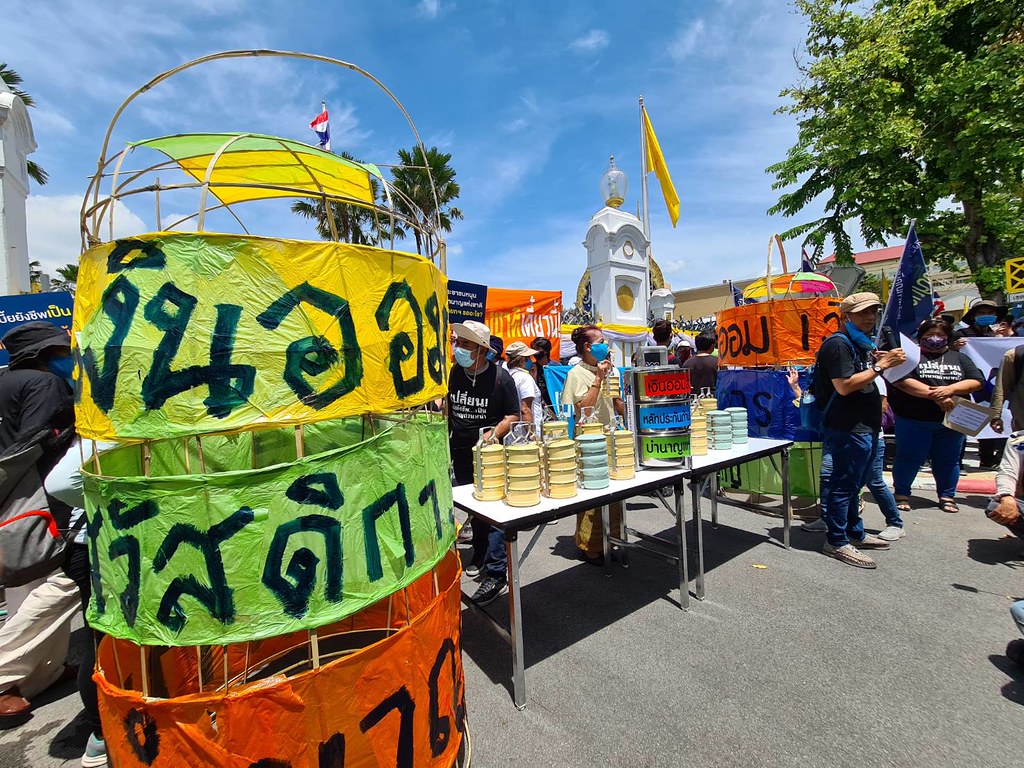 At around 11:00, the demonstrators started making their way along Ratchadamnoen Nok and Phitsanulok roads from the United Nations building to Government House .

The demonstrators arrived at Government House at 11:30. The Deputy Prime Minister came out to receive the letter and a pinto and ate from it. The two demands of the demonstrators were from the Prime Minister’s endorsement of their draft and drafts from political parties that campaigned on pensions for all during the election.

The demonstrators then had lunch together from their pinto near Government House.

During the picnic, members of parliament, including the chairperson and spokesperson of the National Pension Bill Subcommittee, joined, showed support for the people and assured them that the legislative branch is ready to look into the bill once the prime minister signs it.