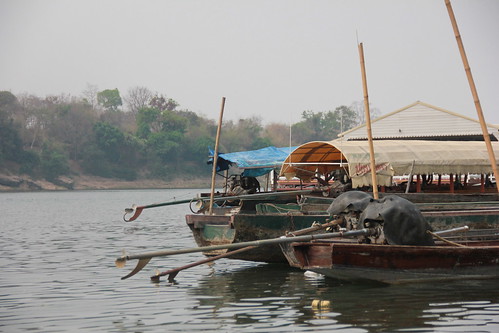 Amidst the spreading of the Coronavirus 2019 in every corner of the world, the government in each country, as well as the departments, organizations, and other related parties are vigorously collaborating in solving the problem with a hope of surviving the disaster that is impacting the human race.

At the same time, the Lao government, in collaboration with a Chinese power generating state enterprise, took the opportunity during this crisis and quickly pushed forward the Hydropower dams on the Mekong river. The latest project is the Sanakham dam.

Commission (MRC) revealed to the public that Lao People's Democratic Republic will start the process of the "Prior Consultation" for the Hydropower Project of Sanakham. This process follows the regulations on prior informing and consulting and the agreement by the MRC, whose members consist of Thailand, Lao, Cambodia, and Vietnam, on initiating a project that will draw the benefit from the Mekong river.

According to the document on the Sanakham project that had been proposed to the MRC, it is stated that the dam is a run-of-the-river dam with the capacity of producing 684 megawatts of electricity. The construction site is in between Xayaburi province and the city of Vientiane, at Sanakham city. The site is only 2 kilometers from Chiangkhan district, Loei province, and 155 kilometers from Vientiane.

Lao is hoping to start the project in 2020 and finish the project by 2028. The project is estimated to cost 66 billion baht. A majority of the electricity produced will be sold to Thailand.

The effort to push for the construction of hydropower dams in the Mekong River has been ongoing for the past two decades. Eleven dams had already been built within China, and Lao has a goal of building seven more dams on the Mekong River.

One of the dams, the Xayaburi dam, had already been completed. There are two more dams that already have plans to be constructed on the Thai-Lao border, Pak Chom dam at Pak Chom district, Loei province, and Baan Khum dam, in Kongchiam district, Ubonratchathani province. These dams are part of the Hydropower Dam development plan that had been laid out along the Mekong River.

We, the People's Network of Isaan Mekong Basin, as part of the civil society and people's network, have been following the situation in the lower Mekong basin, especially the push for the construction of the dams in the Mekong river that create social and environmental impacts across the borders on the community within the Mekong basin in lower Isaan, in the past ten years. We have the following perspectives and the observation on the construction of the dams on the Mekong River:

Over the past years, the Mekong dams in china, including the Xayaburi dam in Laos, had formally started to retain the water to produce electricity since 2019. This had created impacts on the ecosystem and the environment in the Mekong river and led to severe destructions; the reduced in the biodiversity, especially in fish varieties and other aquatic lives in the Mekong river, the issue of the sediments of the upper river dams that affect the nutrients within the lower river ecosystem, and the change in the color of the water that had never happened before. These are the crossed-border environmental impacts that have been accumulated for a long period of time.

These environmental and ecological impacts led to social impacts concerning the food security issues of the communities in the lower Mekong basin within four countries. Local fishers lost their livelihood and income, and many communities lost their agriculture land along the banks of the river.

In addition, the natural tourist sites and the many crucial cultural and historical sites along the river are being impacted which had caused people within the communities and related parties to lose a huge amount of income.

Therefore, the push for the Sanakham project will greatly aggravate the environmental and social problems within the Mekong river on the communities in the lower Mekong basin.

From the situation mentioned above, we have the following proposal to the government and all the related government's department:

Thai government should clearly declare its stance on the situation and the impacts on the ecosystem and environment in the Mekong river caused by the dams built on the river. Thai government should reconsider its stance on buying electricity from the hydropower dams in the Mekong river, especially the Sanakham dam, which will bring about a disaster on the environment and the ecosystem of the Mekong River.

More importantly, the government should reveal the information and the fact surrounding the issue and the impacts caused by the development of the Mekong river to the public and open for the civil society and the people to take part in identifying the problem and propose alternatives for the development, as well as how to mitigate the environmental problems that had already occurred.

2. Or, Transfer money via Paypal, to e-mail address: [email protected]om, please leave a comment on the transaction as “For Prachatai English”