Three stories show that the Thai government is failing to protect the labour rights of Thai nationals and migrant workers.

Prohibition of strikes and lockouts

The Thai Ministry of Labour has invoked the Emergency Decree to prohibit labour strikes and lockouts during the Covid-19 outbreak. Any labour disputes will be transferred to the Labour Relations Committee appointed by Chatumongol Sonakul, the Minister of Labour. 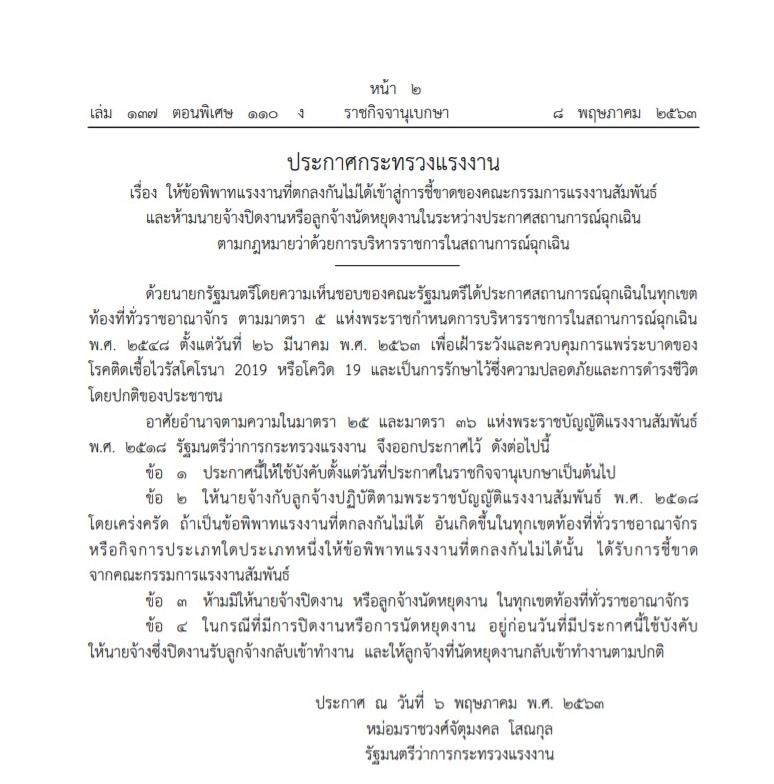 The order has been in effect from 6 May onward. In a normal situation, the current law allows strikes and lockouts in irreconcilable disputes, except in essential infrastructure industries. The government can intervene only when the country is under martial law or an emergency decree or when the Minister of Labour rules that labour disputes may affect the economy or public order.

The order was issued in an attempt to mitigate the surging unemployment resulting from government measures taken to control Covid-19. On Wednesday (13 May), the Department of Labour Protection and Welfare called for business owners to use labour relations principles before they lay off employees, including cutting other costs, improving human resources management, and delaying lay-offs of current employees. 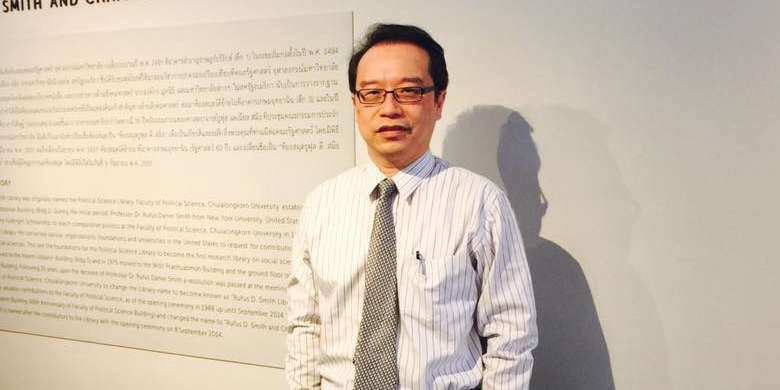 Anusorn Tamajai, Dean of the Faculty of Economics, Rangsit University, questioned if it helps. On 10 May, Anusorn shared his concern that as Thai labour relations have not been in the same tier as in the developed countries, the prohibition on strikes may increase lay-offs and worsen working conditions as business owners struggle to cut costs.

The problem cannot be solved by more prohibition, but by more protection, said Anusorn. In advice given to the Ministry of Labour, he suggested that to slow down lay-offs, the Ministry should propose to amend the Labour Protection Act and extend the period of compensation for all unemployed by two months, however long their period of employment,. For example, a laid off worker who qualifies for unemployment compensation at level 1 (has worked for at least 120 days but less than one year) should have their compensation period extended from 30 days to 90 days.

Jumping off a building

The Ministry of Labour said that as of 10 May, 1 million have enrolled for unemployment compensation. The surging number has overwhelmed the system, resulting in delays in processing money transfers.

Delays do not help people in hardship. On Tuesday (12 May), a group of unemployed gathered at the headquarters of the Office of Social Security and threatened to jump off a building unless there was an immediate transfer of compensation money by 15 May.

So far, Social Security is trying to help. Dr Duangrit Benjathikul Chairungruang, Deputy Minister of Labour, said that from 20 April to 11 May, the Office of Social Security had transferred 3,997 million baht to 706,633 unemployed. When employers close down their business by themselves or by order of the government, the unemployed will get 62% of their daily salary for a maximum of 90 days. Those who do not get approval to receive compensation can file an appeal to the Office by 18 May.

There was talk about whether the Office of Social Security should increase the amount of compensation from 62% to 75% of daily salaries. However, the Office has rejected the proposal, saying the increase will make the Social Security system unsustainable in the long run. Anusorn Tamajai agreed with the Office's position, saying that the Office should withstand the short-term pressure and promote the sustainability of social security. 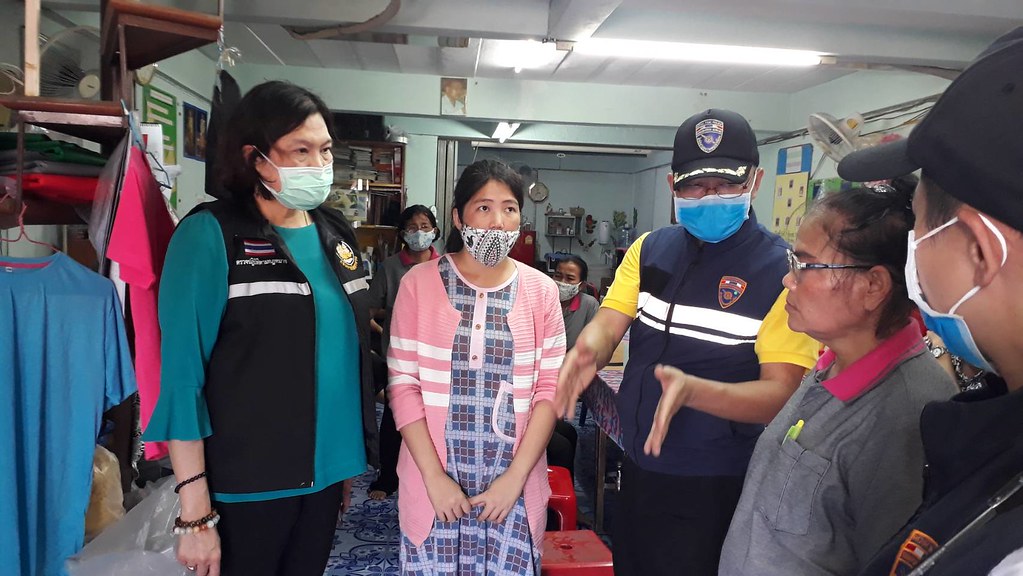 On 13 May, Theanrat Nawamawat, Deputy Permanent Secretary of the Ministry of Labour, revealed that a 30-year-old, 4-month pregnant Myanmar migrant worker came to the Ministry to request help. Wa Wa Thuay had worked in Nakhon Pathom for four years with registration documents. After her employer closed the business due to the outbreak of Covid-19, she had nowhere to go.

Her husband was also working in Thailand, but had to go back to Myanmar to renew his work permit. He was prevented from coming back to his wife when the Thai-Myanmar border was closed due to Covid-19. Without a job, money or relatives, she wanted to go back to her husband and family in Myanmar.

Theanrat said that the Ministry of Labour respects human rights and equal treatment for foreign migrant workers in Thailand. The Ministry coordinated with the Myanmar Embassy’s labour attaché to return Wa Wa Thuay to her homeland. Ministry officials will accompany her to the border at Mae Sot, Tak Province, and facilitate the paperwork for her to get home.

This one case is solved, but structural problems remain. So far, Thailand's policies towards foreign migrant workers have focused more on prevention and containment of Covid-19. The Thai government started to close its land borders on 23 March and allowed foreign migrant workers to extend their stay until 30 May. Leaflets, masks, and hand-sanitizing gels have been distributed. Checklists and screening procedures have been imposed in workplaces.

Some of them have come to Thailand under MOUs that the Thai government made with neighbouring countries to make it easier for migrant workers to come to Thailand. Others come to Thailand through other channels, both legal and illegal. Usually, all need the help of employers or brokers to process documents for them. The problem is that the system is not designed well.

Johnny Adikharee, the leader of a Myanmar labour union in Thailand, believes that 95% of migrant workers do not know about the benefits of social security at all. Even for those who do know about it, the procedures are too complicated.

Suthasinee Keawleklai, Coordinator of the Migrant Workers Rights Network (MWRN), said that to ask for compensation for lay-offs, a migrant worker not only has to ask for a letter of approval from the employer but also has to go through both the Department of Employment and the Office of Social Security. Most of the time, a migrant worker needs to hire a lawyer to get through the process.

Suchat Pornchaiwiseskul, Director-General of the Department of Employment, Ministry of Labour, insisted that there is no discrimination since the Thai government uses the same law for both Thai and migrant workers. If there is unfair treatment, they can ask the Department of Labour Protection and Welfare for support. Migrant workers who have no access to social security tend to work in seasonal agriculture and fisheries. Although they have no social security, employers tend to buy health insurance for them.

Still, the Ministry of Labour should improve the system to make it more accessible, said Sompong Srakaew of the Labour Rights Promotion Network. Sompong said that the way it is currently designed, the system forces migrant workers pay lots of money to get through the documentation process. It also makes migrant workers heavily reliant on employers.

"Sometimes, an employee paid an employer every month for social security, but the employer did not pay for their social security," said Sompong. "Or in the case of MOUs, where the Thai government attempts to legalise all foreign migrant workers, processing the documents by themselves or through middlemen is expensive. Workers have no money for it, like 1,900 baht for a 2-year visa. Some just become illegal workers, and then they get exploited by the brokers, the employers, or even the officials. "

For Sompong, a simple way to solve this problem is to design a single ID card for universal access. This will end not only possible discrimination by employers and brokers but also the document process, which is unnecessarily complicated. "I want just one card to guarantee their legal rights, by workers themselves having to prove that they have a job and an employer," said Sompong.

Round Up
labour rights